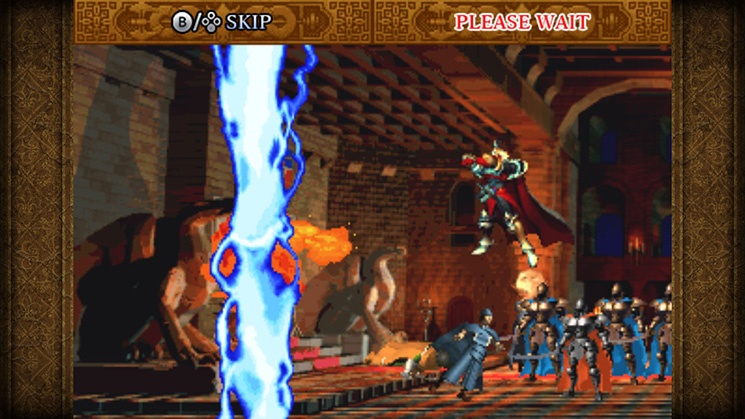 When game companies try to move outside of their comfort zones, I feel like it either is a spectacular success or a spectacular failure. There’s really no middle ground: either Mario is suddenly driving Go Karts and it becomes a massive franchise or Luigi is using a time machine and everyone wishes they could erase that memory.  But it’s also true with certain variants of gaming mechanics. Vlambeer has tried every game type under the sun and, miraculously, found love with twin stick shooting (so much love they never made another game, but that’s a different story). So when I see Psikyo is doing a variant on a shooting game, I get a little excited, and a little hesitant. After all, if the formula works, why screw with the ingredients?

Sol Divide – Sword of Darkness is the weirdest attempt I’ve seen a gaming studio make to both try new things and keep firmly entrenched in their comfort zone. It’s a sword and sorcery type adventure game that presents and plays as a horizontal shmup. There’s this plot that’s happening, but it’s honestly crazy broken in terms of both translation and actual cohesion with what some folk would call “logic.” Basically, there was this demon dude who wanted to steal stones of power, and a warrior/king tried to stop him but was too late. Then, seven years later, the demon reappears and is ready to wield some crazy powerful stones and destroy the world, so, naturally, you gotta stop him. You take point as one of three characters, but, as you find out quickly, only the main warrior, Vorg, is really worth playing. 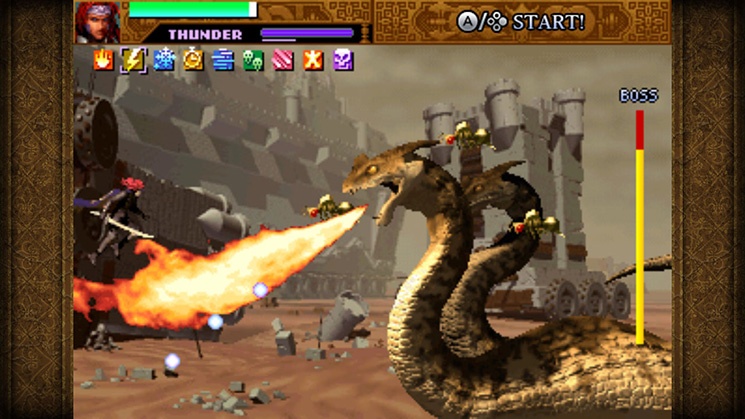 That’s because Psikyo decided to try a little something different and mixed in some craziness with their horizontal shooting approach. Besides just waves of bullets to shoot, Sol Divide also asks that you balance two additional mechanics: magic and melee. The magic system is actually pretty interesting, because you pick up spells as they’re randomly dropped from enemies the further you progress in the game. Some, like the standard flame spell, take only a small amount of magic (a bar that refills as you slay enemies), whereas others, like the massive room freeze spell, take a lot more but also immobilize all the foes for a few seconds. This actually adds some great versatility to a horizontal shooter outside of “save up my bombs for the boss.” The only downside I found is some of the spells don’t do a goddamn thing. Seriously, there’s this wind spell that I casted that filled the screen with little wind animations, took almost all my magic and not a foe on screen seemed to care. This game isn’t long enough for me to sit there and work out all the kinks, so I just stuck to fire, freeze and lightning, because those gave results.

The melee is why I referenced Vorg as the only character to really use. Melee does a decent amount of damage, but it comes at a cost: namely, you gotta be up close and personal with whatever you’re hitting, a cardinal no-no when it comes to shmup games. The other two characters, a blue dude named Kashon and a sorceress named Tyora, have decent enough range attacks (and the same damn magic as everyone else) but their melee swings are slow, deliberate and often weak. Vorg has a distinctly more intuitive and faster sword strike that actually does some decent damage and can catch an enemy off balance. I know that the different characters exist for variety because, well, that’s what Psikyo likes to do in their games, but when only one of them actually feels like a viable answer to how to survive, then what’s the point in offering anything? It’s like letting players choose between a bat, a fish and a soft sweater when playing baseball. The other two could technically work but, really, you know what you’ll pick. 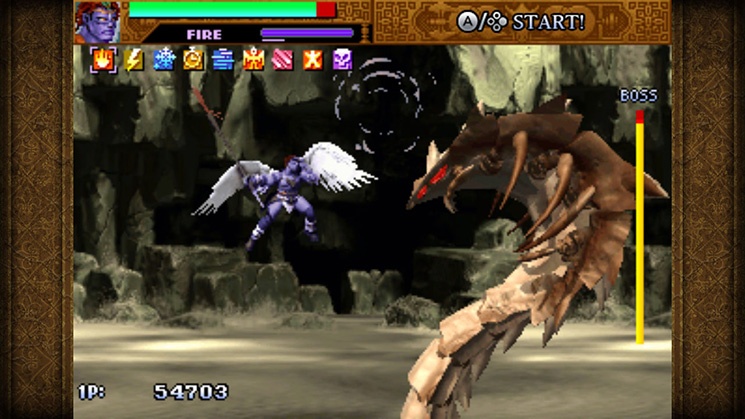 Sol Divide – Sword of Darkness is actually really interesting and cool in its approach to the gaming sphere. Firstly, this is a lot less actual shooting and a lot more strategic response. That’s because most of the enemies you’ll encounter will take quite a few hits to go down, so you need to develop a good pattern of diving, striking and fleeing to survive. Instead of just hanging at the back and gently weaving between waves of bullets, you get a chance to fly about the screen, trying to avoid strikes and spells equally while throwing back some madness of your own. More than once I flew out of the path of a fireball and straight into a sword, and that kind of balance was unexpected but not unpleasant. It shows a cool decision on Psikyo (and ZeroDiv, by extension) on what players could and should do. When you get to the higher difficulty levels (one to four, a nice slider) the focus on staying afoot is insane, and it’s pretty damn awesome.

There’s this minor, kind of strange situation where you can “pick a path” to where you’ll be going next in your quest to stop Satan (actual Satan) and unite the kingdom, but it’s completely arbitrary. You either do one quest or another, and then you do the other after you finish the first. It’s a hollow attempt to simulate RPG elements, but it’s at least something. But, for fans of most shmups, this is going to distract and detract from the overall gameplay element.

And that’s something I think is the big takeaway from this game. This doesn’t feel like it’s for the average, run-of-the-mill shmup fan. This is a cool but strange blender attempt to make two game types play together, and it mostly works. There’s this wonkiness with the graphics, but that’s more an age thing than anything else, and the fact that only Vorg seems worthwhile to play with. That could also be my play style. In any case, this is certainly something different, and, for many Switch owners who weren’t really playing obscure PS1/Sega Saturn titles, this is their first time to see such a game. Sol Divide – Sword of Darkness is unique, and not just in an ugly baby sort of way. Honestly, I’d give it a go if you’re even mildly curious about how it plays out, because you won’t be disappointed.