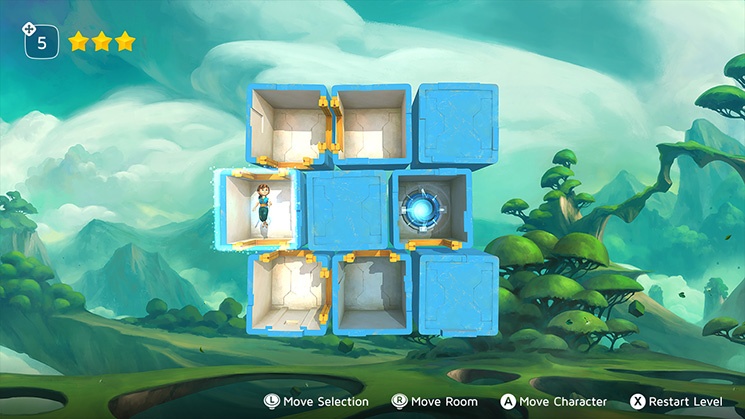 With Nintendo’s commitment to the indie development scene, its library upon the Switch has seen an overwhelming increase in the different styles and genres of video gaming. With such an abundance of offerings, it now requires something special for a title to rise above the rest and become more noticed. With the release of Warp Shift, a title developed and published by Isbit Games, the Nintendo Switch now gives home to a puzzler that truly does stand out amongst the crowds of its genre.

You play as Pi, a young girl who investigates the scene of a fallen comet that has landed in a nearby forest. She soon comes across a strange cuboid at the crash site, which bursts into life as a small floating droid. Before you know it, the ground opens up beneath them and both Pi and the robot fall into a chamber that houses a large pillar that extends through different dimensions of the galaxy. In order to return home, both Pi and the robot must set about completing the construction of the pillar, one row at a time, in a series of increasingly challenging puzzles.

Set over five dimensional stages, each housing fifteen levels, the game presents you with a series of grids, in which you slide along rows and columns in order to find an escape route to the next level of the pillar. It all sounds like a basic premise and nothing particularly new, or different, to other games that operate in a similar mechanic. However, there are several factors within the gameplay elements of Warp Shift that make this particular puzzler a thing of beauty. 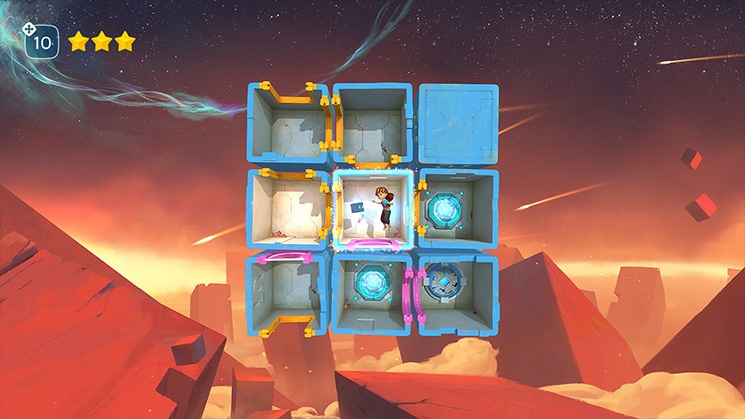 Whereby, the majority of similar-styled games use a two-dimensional viewpoint, either as a standalone or on a three-dimensional background, Warp Shift have reversed the trend by utilising 3D graphics against an animated 2D backdrop. Its effect is very pleasing to the eye; particularly with its exemplary artwork and cut-scenes which look absolutely stunning. The 3D models of the blocks, which comprise each grid, now contains a level of depth to them which allows you to peer inside their interiors. You come to realise that this is an important element to the gameplay, as each one contains certain items, gates and controls which need to be manipulated in order to create a path for Pi in which to escape.

The basic element of the gameplay involves getting Pi, who is housed in one cube, to an escape portal, which is housed in another. Each of the other surrounding cubes possess any number of doorways which need to be lined up in order to create a path from Pi to the portal. It all sounds easy enough, however, with each levels progression, the complexity of the puzzles increase; from larger grids, colour co-ordinated doorways, switches with which to open doors and the need to pick up your robotic friend and launch him yourself through the awaiting portal. These pathways can be achieved by sliding the cubes into position, although one cube’s movement can affect another’s and so on and so forth.

This task can be made all the more complicated by the inclusion of a star reward system, with each level awarding up to a total of three stars. You need to amass a certain number of these awards in order to unlock the higher tiers of the pillar and progress further into the game. These stars are awarded based upon the number of moves, both with blocks and with Pi, you make in order to create the escape path; complete the level with the minimum number of moves and the full quota of three stars are awarded, any more than that and the total reduces. It is possible to complete each level with any number of moves, but in order to ascend the pillar to its highest points, it’s always best to try and achieve your goals in as few moves as possible. 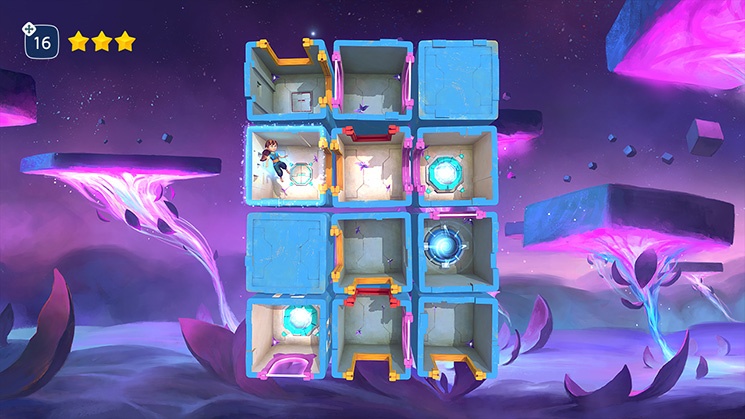 The mechanics in which each grid needs to be solved by, requires a level of attention that needs planning before you make your moves. With no timed countdown, or pressures to complete the grid in a set time, this allows for a more relaxed playthough of what the game has to offer. With its stylistic artwork and mesmerizing soundtrack, Warp Shift is a game to help relieve any stresses or anxieties from the normal day-to-day life of living, offering a nice escape in amongst its idyllic settings. However, with its ever-growing complexities in its puzzles and grids, this is also a title that can stump your logical thinking of reason; often leaving you to scratch your head in finding the solution to advance. This doesn’t make the game frustrating though, it simply offers you a challenge that becomes quite satisfying upon each grid’s completion.

Utilising both the Switch’s Joy-con and touch screen controls, as well as pro-controller support, this is easily a title that feels at home both docked and in handheld modes. It also makes full use of the rumble feature which, quite frankly, contains the best use and most satisfying feel of this function that I have ever witnessed in any game. It really is a joy to behold as the cubes movements really do grind within your hand. In terms of gameplay, there are no negatives that I could find, however, with its origins on the iOS and android platforms, this is a game that be obtained for free on these devices. However, on the Switch, it provides a superior experience which makes it worth its price on Nintendo’s console alone.

Overall, Warp Shift is a really pleasant experience that needs to be experienced. Despite its simplistic mechanics in an already-overcrowded genre, this title really stands out with its pleasing gameplay, stunning presentation and relaxing ambience. All of its elements combined, produce a finished article that becomes the blueprint on how other puzzlers should perform. In fact, thinking about it, there isn’t really anything negative I can say about it. Obviously, it depends on whether you’re a fan of the genre or not, or are looking for a more immediate title to thrill and excite, however, if you’re simply looking for a good time and a relaxing jaunt, then Warp Shift is a title that can be easily recommended.