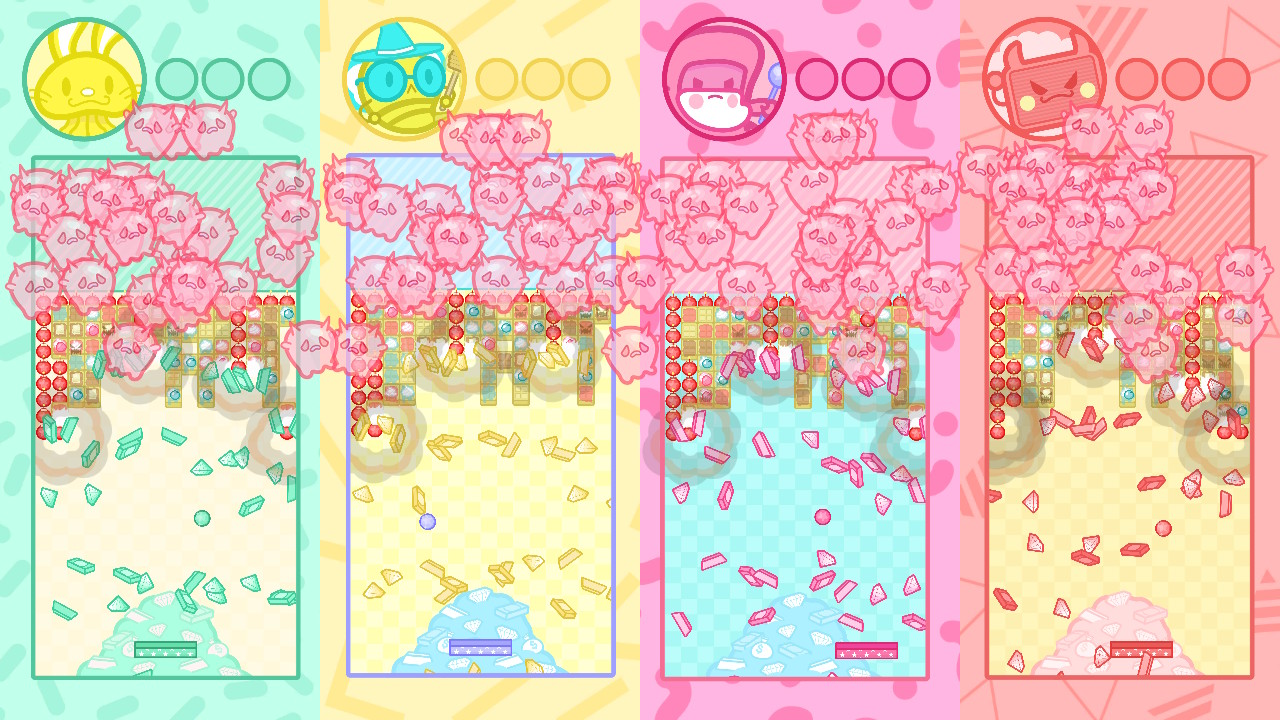 Beakforcist Battle is one of those delightful little titles that clearly comes out of someone either taking an inside joke way, way too far or potentially from a night of heavy intoxication with the rare follow through afterwards.  The fact that the title has a hashtag in it normally (I won’t deign to write it in the article) feels like it may be the former, but I simply don’t know. Someone decided that it was time to take colorful breakfast items, possess them with ghosts and demons, and then drive the evil spirits out with Breakout/Arkanoid mechanics. Alright, fair enough.

You’ll notice there isn’t a lot of preamble in this article, and that’s because Breakforcist Battle wears its heart (and everything else) right on its sleeve. There’s no story or adventure mode to get lost in, no real lore or sense of reason for why things are the way they are. I had to visit the website just to find out that I’m apparently freeing breakfast from evil, and the way I do that is to hit things with a ball. Don’t get me wrong, not every game needs a total background tale in order to get me moving: some of the best games are incredibly minimalist with their delivery of setting/history. Yet, with such a surreal combination of things, I figured there might at least be a story of someone spilling coffee on the Necronomicon or that kind of deal. Nope, nothing even in the YouTube trailers. Whatever, I’m down to play. 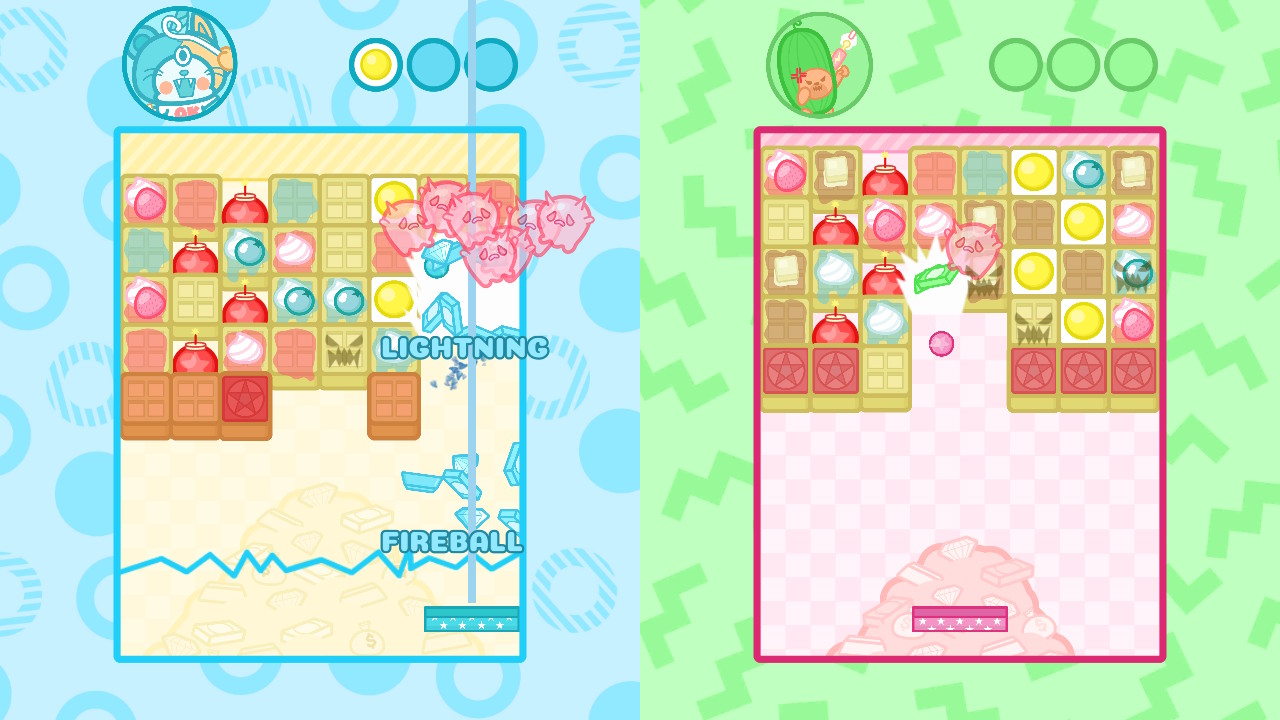 As I mentioned, Breakforcist Battle is all about the paddle game. Bounce your ball up to hit incredibly colorful targets as the screen slowly descends, moving items closer and closer. You can lose as many balls as you want, but it takes precious seconds to spawn a new one. If the ceiling touches your paddle, it’s game over. Thankfully, there’s a lot going on here to keep it interesting. You have the waffle pieces that have ghosts in them, sure, but that’s pretty standard. There are bombs that explode and make the ceiling relent and go back up, always useful. And then there are the egg tiles, which are fan-frigging tastic. Each egg tile contains a useful powerup, from short-termed items like freezing the descent or a targeted lightning strike, to longer things like multiball, a bacon laser or (most important) a shield that’ll bounce back the ceiling once if it gets too close. The shield is wonderfully useful and overpowered because, unlike the other powerups, it sustains between levels. Get the shield. Get them as much as possible.

Now, the developers, Lucid Sheep, have done a ton to make Breakforcist Battle appeal to everyone using a Nintendo Switch. First and foremost, everything about it is dirt simple. You move left or right. That’s it. There’s no button to fire the laser or whatever, just let it happen. And they decided to keep the movement for the vertical JoyCon single grip instead of holding it sideways, which thank God, because I really do hate doing that. It hurts my hand, and, for such a simplistic movement set, it would have been a waste of time for everyone. Players have the choice to do movement controls, and that is absolutely up to you. For me, I felt like the paddle moves a bit slow as it is: the motion controls slowed it down further and made things exceptionally erratic. By just keeping it to having the joystick dictate things, it was a lot better.

Arcade mode, which can be single and co-op, is a fine enough time, but I simply liked it better solo. Sure, the levels were more challenging and I didn’t have as many balls on the screen, but I also had a lot more control over things. I was able to use the full screen and dive around at my leisure. In co-op, you have only have the screen to yourself, cannot move to your friend’s side and also have to keep their ball in play as well. In theory, this works out well because now two of you can get powerups, two of you have your eye on the ball, and there’s double the input. In practice, however, it can lead to one person needing to do all the work because of bad angles, and one person getting all the powerups due to where the eggs spawn. You get resentful and upset, and when both of you keep missing the same one block in the middle of the screen, you get angry at each other instead of dumb luck. I did enjoy the hell out of this game with my daughter, though, because it was essentially a great version of me doing a lot of the moving and her being there to bounce the ball back either by chance or accident. In any case, she had a blast, so that’s something to consider for parents. 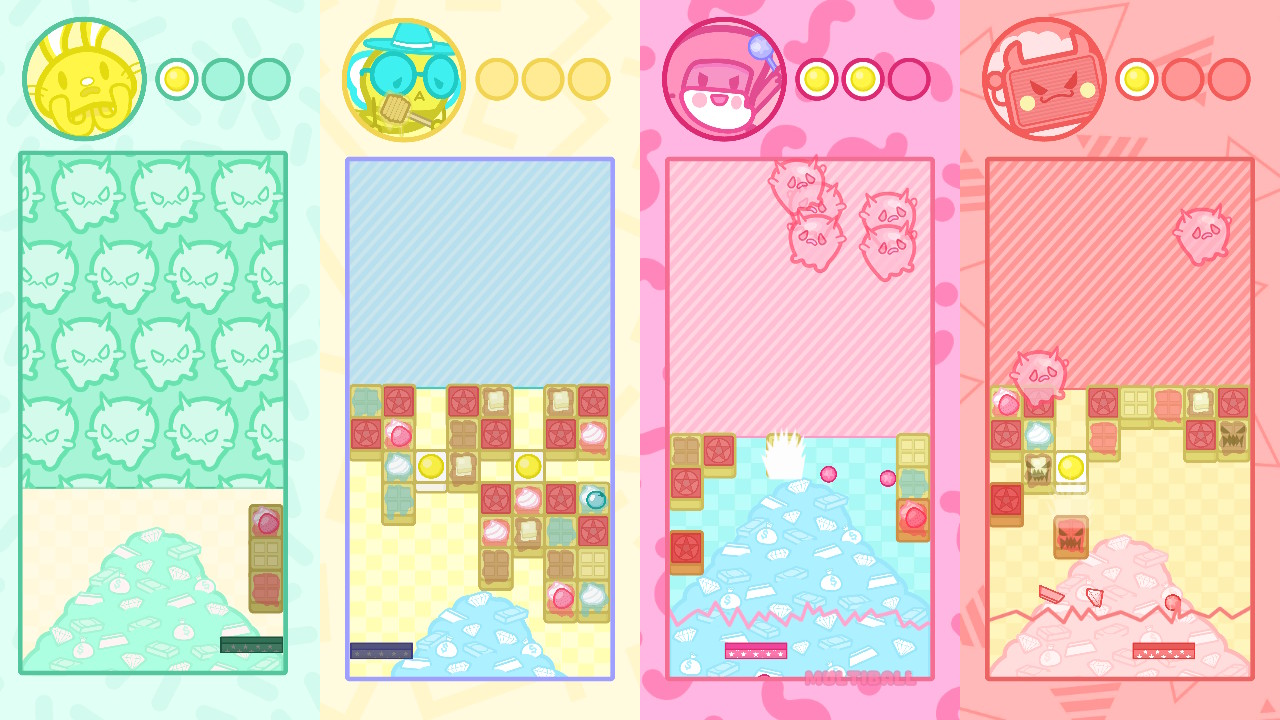 Battle mode is where Breakforcist Battle puts up its strongest front and it’s absolutely hilarious. Some time ago, Tumblestone wandered into my visage and did several things right, and multiplayer was fun but a bit lacking since it was more of “four solo players” instead of actually affecting other people. At the time, that was right for me, but I didn’t realize there were other ways to go about things than the Tetris style of simply throwing more blocks onto your opponent’s screen. For example, had I know that I could flip my opponent’s screen upside down, that could have been fun. Or if I made their paddle impossibly small for a limited time. Or, sure, I added one giantwaffle to their screen to make things difficult. All of those and more are ways to get in your friend’s faces during battle mode, and it’s so ludicrous that it’s hard to actually get upset.

Now, Lucid Sheep aren’t the sole developers for the game: Pete Ellison is a big hand in Breakforcist Battle, and I’m glad he is. Pete has contributed most of the artistic design, and the appearance and music are amazingly important. First and foremost, the character sprites are adorable. Maybe you’ll stick with the traditional Breakforcist icon, but I favor the Banana Rabbit Octopus thing when it comes to multiplayer. The sprites change expressions on dropped balls, pending doom and successful level completion. Watching your small ball morph into a giant pancake is always fun, and it’s all occuring to this upbeat, driving EDM that changes in tempo and urgency depending on how close you are to game over. There’s a good variety to the soundtrack, and there’s no set tracklist: the tunes change at seemingly random intervals, and I loved them all. How can you not love a track called Brunch My Body?

Breakforcist Battle takes a simple idea, gives it a ton of insane nuance and concept, and then delivers it, fully formed, onto the Switch. The fact that powerups stack is simply amazing, as having eight balls or one giant, flaming pancake careening around the screen is an exercise in delightful madness. Breakforcist isn’t looking to gain RPG of the year, but this could be one of the best multiplayer arcade games that I’ve seen on the Switch so far, and I’ve seen quite a few. For ten bucks, this is a wonderful party game to have on hands for kids, adults and everyone in between. If you are even remotely curious, you won’t regret it.