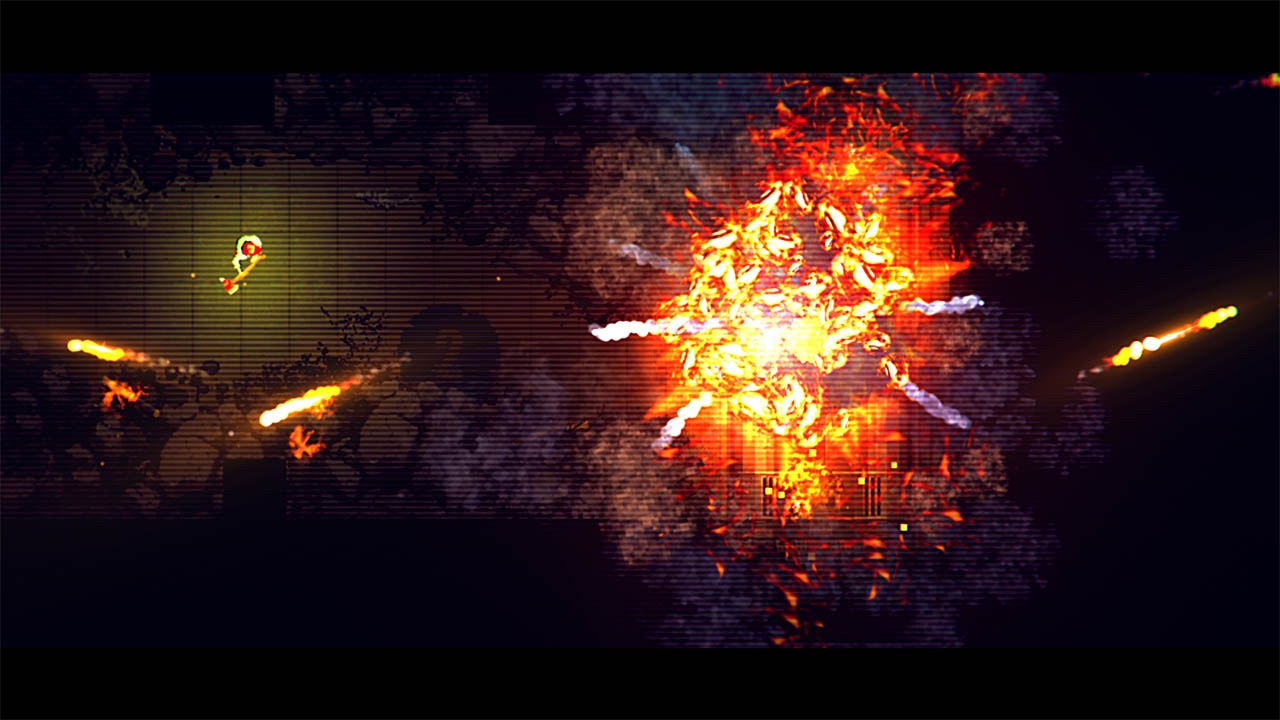 Garage: Bad Trip was announced by TinyBuild as a Nintendo Switch exclusive some time back, and, since then, I’ve been waiting with anticipation for this fabled game to arrive. My love affair with TinyBuild is no secret, as many of the games they choose to publish end up being some of my absolute favorites. So when I saw a twin stick, top down, VHS-style gorefest coming, I knew that I had to play it. And, having finished, I feel that Garage scratches many of the itches I had, with a couple extra ticked and a couple of boxes mysteriously empty.

The story goes that you’re a dude named Butch who wakes up in the trunk of a car, inside a parking garage, and everything has clearly gone to hell. Stuff’s on fire, the dead are walking, plenty of non walking corpses about…total mayhem. By and by, you find out that the dead walking and other monstrosities are the result of a mad doctor who works for a corrupt company, and you get recruited to try to solve this mystery and fix things once and for all. I mean, you don’t really want to, but ghosts of your past combined with a greater affinity for “save humanity” instead of “die in ennui” kind of prod you along with a pointed stick.

Zombie Dynamics, the creators of Garage, have put a lot of thought into instilling chaos and calamity in their twin stick darling, and it really shows throughout the levels. At the very beginning, you’re entreated to a ton of jump scares that come in the forms of music changes, doors bursting open and the dead becoming the undead at the drop of a hat. Everything, when the game is flowing, feels incredibly frantic, but manageable. I will note that I chose to play the game through on easy mode because, well, I suck and I wanted to simply enjoy the game. Even at easy, there are several times when you can very, very quickly get overwhelmed and killed. The name of the game is range: keep at least a body width between you and the attacking corpses and you should be alright. The rats are a different goddamn story, as they are the first enemy you encounter, they stick with you for the duration of the game and are always, always the bane of my existence. They bite fast and can dodge bullets more easily than the slickest cadaver. What the hell, guys? You showcase the human centipede miniboss in the trailer but don’t mention that a third of your deaths come from not kicking rats fast enough? 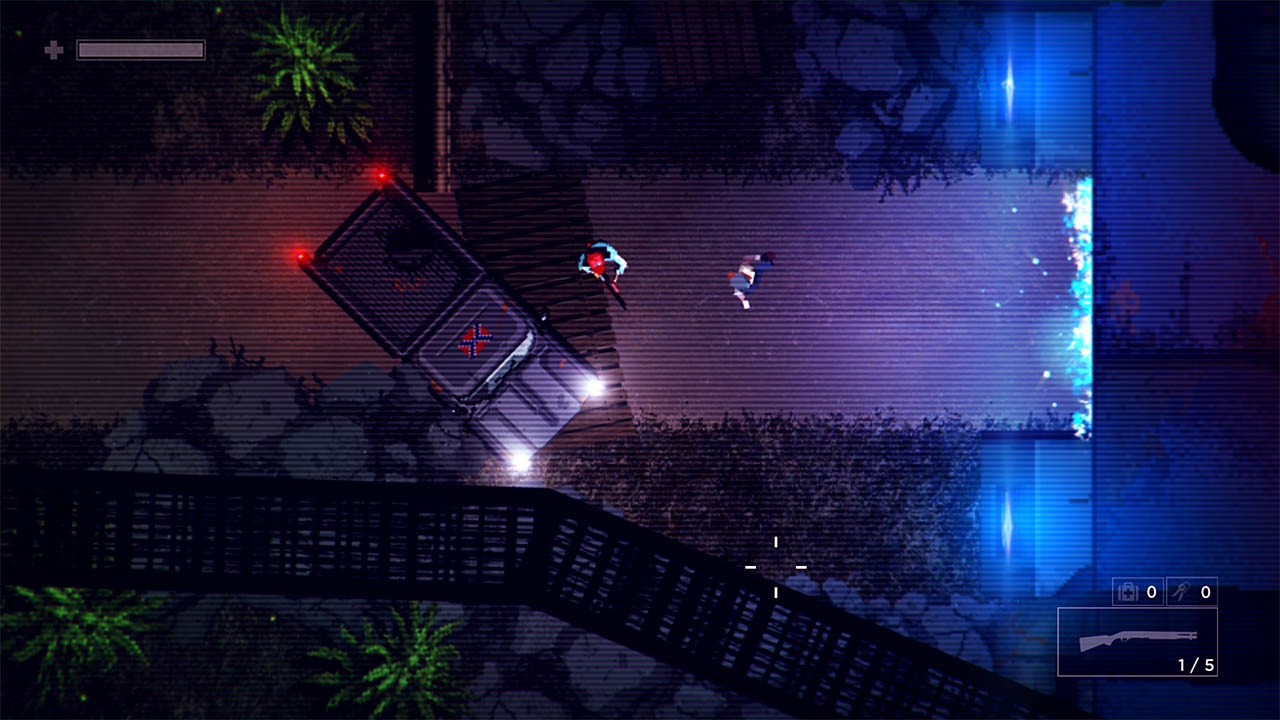 Control-wise, Garage asks a lot of you in being spry and creative. You get a weapon wheel that opens with the right trigger, and you can cycle through weapons as you find them. Over the course of the game, you’ll lose some, find more, and find even more. If you close the wheel wrong, you end up with the wrong weapon in hand, which can be costly. You gotta spend time to reload each gun as you use them: there’s no auto-reload just because the pistol’s in your inventory. The gunplay, as a result, is something incredibly precise and necessary, and you need to up your accuracy game immediately. Ammo is plenty on easy mode, almost too plentiful, but you’d be surprised how fast Uzi magazines disappear when you don’t know where the hell you’re shooting.

But you’re also a sprightly fella, and learning to dodge-roll is a massive skill to obtain, especially once the bad guys who have guns arrive on the scene. Things like rolling, kicking and swinging an axe use up an invisible bar of stamina, and, once you’ve exhausted yourself, you gotta wait till your heartbeat slows to regain control. Of course, if you pound a random energy drink that enemies might drop or you might bash out of a vending machine, you’ll have a limited time to act as EXTREME as you want. I’m glad that there is this meter, because it forces you to use more strategy in this game than meets the eye. There were multiple levels where I had to think and time out when I was going to roll in, throw a grenade, and try to hustle my ass out-of-the-way before things exploded. And if I misaligned my throw, the likelihood that I would explode myself with a grenade/red barrel/exploding zombie were high. The explosions are no joke, and they will shatter your life.

The aesthetics of Garage: Bad Trip are also a huge victory in this game, as the grainy, disjointed feel comes through in multiple aspects of the game. As you lose life, the picture becomes more muted and fuzzy, and you’re actually more likely to die the worse off you are simply because your vision is dulled and your reactions feel the same. The “Bad Trip” aspect of the game only comes into play a couple of times, but it’s relatively exciting to try to experience the game as the screen starts glitching out, digital hallucinations pop up and things become a technicolored nightmare. Please note that, as a horror game, this thing is definitely DARK. It’s not as dark as some games that I’ve had problems with in the past, but draw the curtains so that you can a.) see the doors you’re supposed to go through and b.) properly scare the hell out of yourself.

And the music! If there’s one thing that Garage absolutely killed, it’s the soundtrack. The sound effects of the zombies and the gunfire and all that are great, don’t get me wrong, but the music is positively addicting and enveloping.  Playing with a wide range of tunes and tones, from dark and foreboding to driving and hip-hop centric, you really run the spectrum for what music can be in this environment. It adds to the atmosphere of the game, on every level, and it even makes the gunfights better. During Chapter 7, there’s this amazing track that slams everything into high gear and made me feel like Neo during the lobby shootout in the first Matrix. Seriously, it’s that damn good, and it doesn’t hurt that I’m being shot at on all sides. 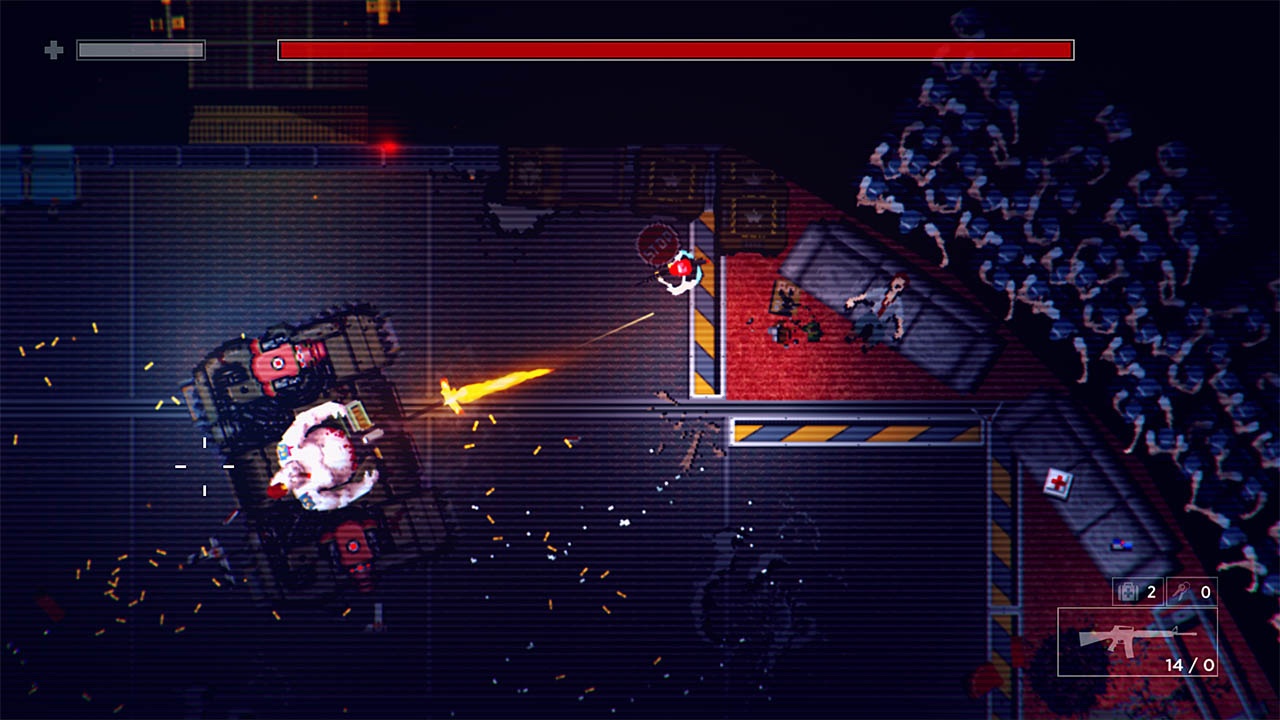 Gameplay, music, aesthetics, all wonderful points of Garage. There are, however, a couple of shortcomings. Firstly, the story. The way the plot unfolds is incredibly disjointed, which mostly works, given the headspace of Butch and the world around him. But what kills it is how we try to tie everything together at the end, after I’ve just spent close to fifteen minutes on the final boss fight (which, by the way, is crazy difficult and took way too many restarts). Suddenly now there’s this cohesion to stuff but it feels less “Aha!” and more “Wait, what?” It falls flat in the way it tries to set up the possibility of a sequel, if only because it doesn’t feel organic or genuine. I won’t spoil too much, but there’s some pretty vital clues in the artwork itself and anyone who looks at the icon of the game or checks out the website after playing for a few minutes might be able to piece together things ahead of time.

Secondly, Chapter 10. C’mon guys. I can’t tell if it’s funny or not because I’m still a bit pissed that literally nothing came out of it and there’s no follow-up. Again, not trying to spoil anything, but Chapter 10 seems to spit directly in the player’s faces and it’s up to you to decide if it’s a joke or an insult.

Lastly, as a Nintendo Switch exclusive, I expected the game to be liquid smooth and tight as a drum, but the fact remains is that there is some slowdown when the going gets tough. All things about the insane number of mobs spawned during the final boss, there’s dropped frames and lagging when multiple explosions get set off or when there are a few extra shooters on the screen. This isn’t something bad enough to totally ruin the game, but it was surprising because I expected this to be highly polished from start to finish. Not even disappointing, just kind of an “oh” moment that was less than fun.

Having said all that, Garage: Bad Trip is a hellishly fantastic time, and I’m pumped to have this painfully pleasurable game on the Switch and the Switch alone. If you’ve been jonesing for something that brings demented television, rat-burping corpses, an oddly placed motorcycle mini game and two-headed dogs all in the same vessel, you’ve definitely come to the right place. Get the kind of delirium that Hotline Miami frames with the acid shooting of Neon Chrome and top it all off with a one-of-a-kind soundtrack, and you’re going to have the best Bad Trip ever.