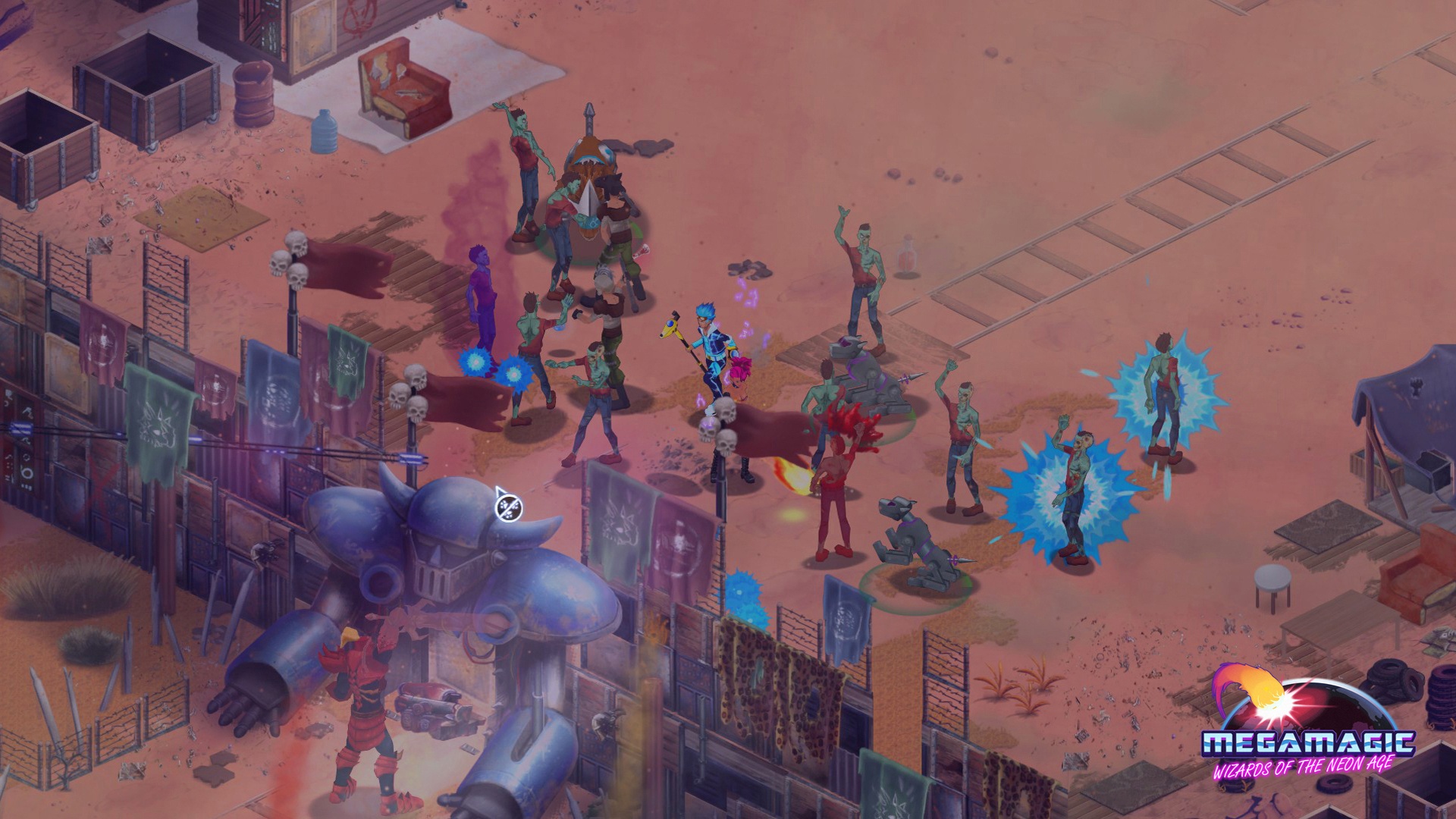 One of the most memorable eras in human history is the 1980s. The music, video games, movies, comedians, and major world events all cumulate in a pop culture phenomenon many still remember today. MegaMagic: Wizards of the Neon Age is another paid homage to that era. This game incorporates action-RPG elements, with a surprising cooperative factor in combat.

MegaMagic begins with a familiar, but welcomed idea. It is somewhere in the far future, but in addition to advances in technology, magic is real and people are also wizards. The population has managed to harness the power of technology to improve their daily lives and master the art of magic to defend themselves from vicious creatures and hostile magic users.

As soon as you fire up the game, you are thrown into the neon world of MegaMagic. The story starts off as a highly skilled wizard and his 2 sons are fighting off monsters and hostile wizards that are on their tail. Eventually, the dad entrusts his brother, the uncle, to take care of the kids, as well as passing on his staff and spell book. The final sight of the dad is fateful, but it was meant as a passing of the torch moment to his kids. 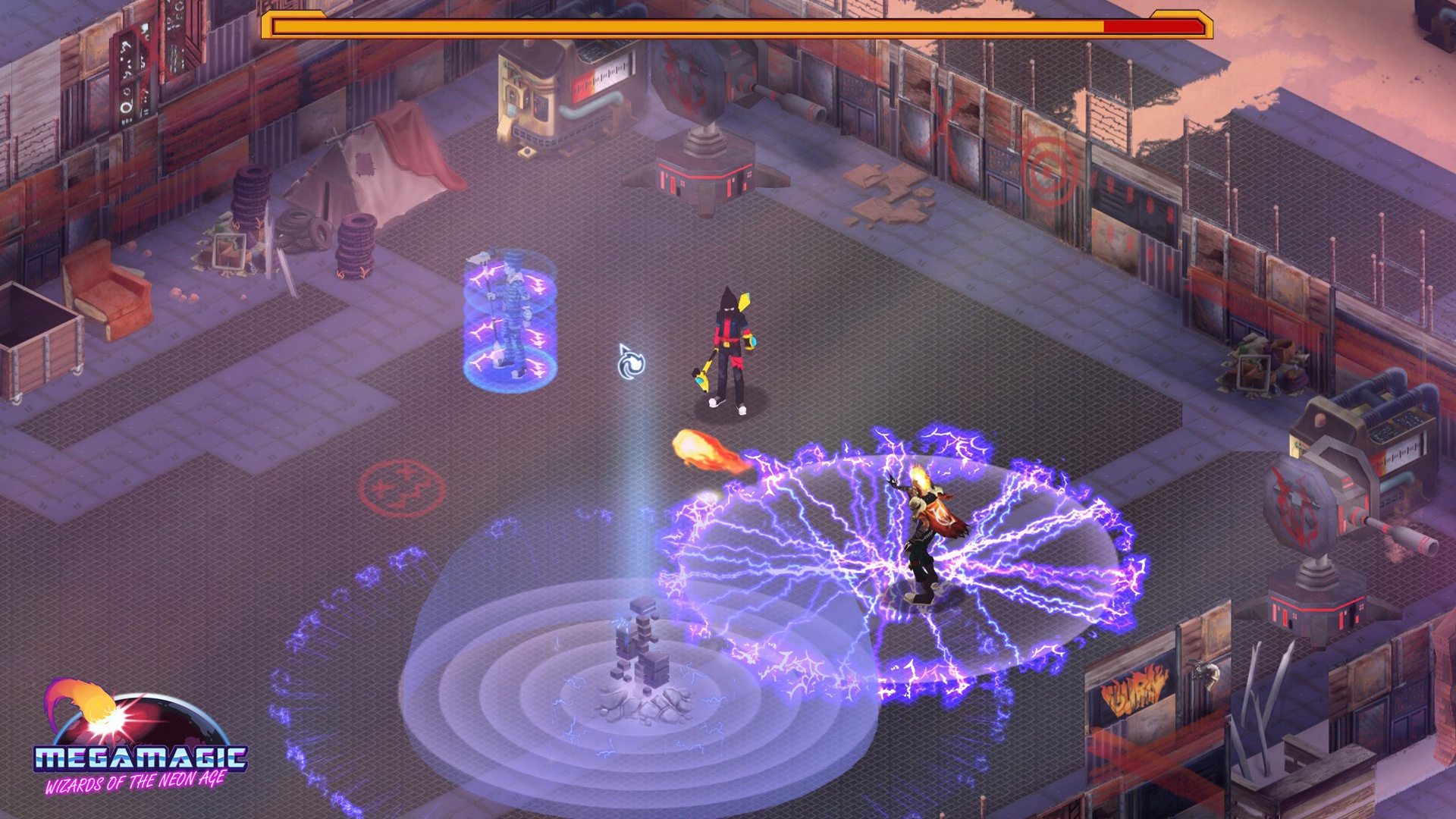 Fast forward 1 year later and one of the sons, Phoban, is ready to take his test to become a wizard. Something happens in the testing, the head wizard guy is linked to the fate of his dad, and before you know, it, he’s being chased by Techno Rangers(not military personnel that listen to techno music…). From there, the adventure just speeds off into a collection of side quests, attached from the main story quest of stopping the big bad wizard hunting you down in the first place.

I will applaud MegaMagic for 2 of its strongest core principles established in the game. The first thing I praise MegaMagic for is the music. The soundtrack seems inspired from a mix of 80s synthesizers music from cartoons and games of the 80s era. The composer, Mitch Murder, also composed the music for one of my favorite short films on YouTube, Kung Fury, as well as the video game, Hotline Miami..The music, accompanied with the crisp visuals that are comparable to an 80s or 90s cartoon, make MegaMagic a unique experience to play through for hours.

The gameplay sticks with a basic structure. You move your character with either the keyboard and attack with mouse clicks. Or you can use a compatible controller and map the keys according to your own liking. The overall combat and movement has strong resemblances to games before it such as Diablo and other rogue-lite games.

As Phoban, you’re accompanied by a floating little poof ball called Fum. He’s there to provide comic relief, as well as provide clues in the environment to complete your next task. He’s a welcomed companion to your adventures, but I can’t help but be reminded of Dragon Quest’s iconic slime creature.

The combat branches into two more layers of depth. The first is your grims. Grims are divided into offensive, defensive, and creature summoning abilities. Defensive abilities are used to buff up your defense or shield the creatures you summon into combat. There are 5 total areas of grims to specialize in. Offensive attacks range from energy blasts from your staff to an area of effect  attack that clears the congregating enemies that get too close in your personal space. There was something satisfying with summoning a rat creature to supercharge a bite on my enemy while I tossed in a couple of energy blasts from my staff to soften up the horde of zombies I was fighting off. 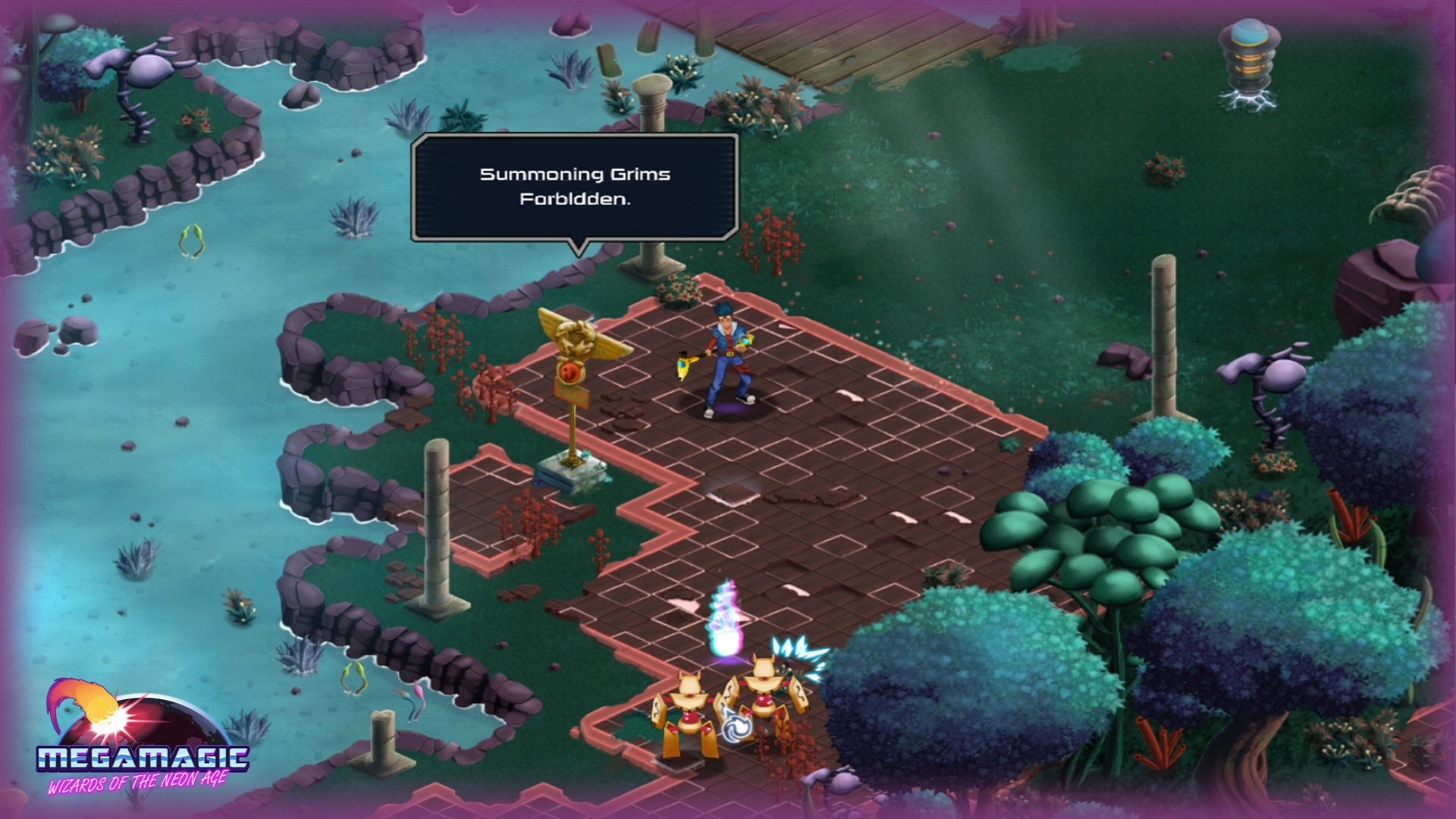 The second element of combat that was touched on is summoning creatures. With your grims, you are able to summon different creatures to fight for you, even allowing you to take control of them directly. Juggling between defending Phoban’s health and controlling your creature’s attacks can be a challenge if you don’t master the control scheme well enough, but can be rewarding if used correctly, resulting in devastating combos against your enemies.

MegaMagic has won me over with nostalgia for the 80s era, but it did make me realize that this can’t carry the game alone. Aside from the minor marks that will show up in the game telling you where to go, the game lacks guidance of where you have to get going to next. This was an initial frustration beginning the game as I had to quickly figure out how combat worked, leveling up, and going forward with the story.

In contrast to the downside of MegaMagic, I was surprised this game had cooperative play. This happens by summoning different grims, but allows different players to control each one and support you on your quest. This addition to the game adds more depth to the gameplay and allows for more interesting attack and defense combos to take effect.

Overall, MegaMagic was an entertaining game to play. The graphics pull you in, the soundtrack is delightful to the ears, and the creators of the game structured it in a way to immerse you into a living, breathing world that you don’t want to get out of. I’d recommend this game when it hits a holiday sale, or if you are up for something different, buy it outright to support the developer’s future projects.