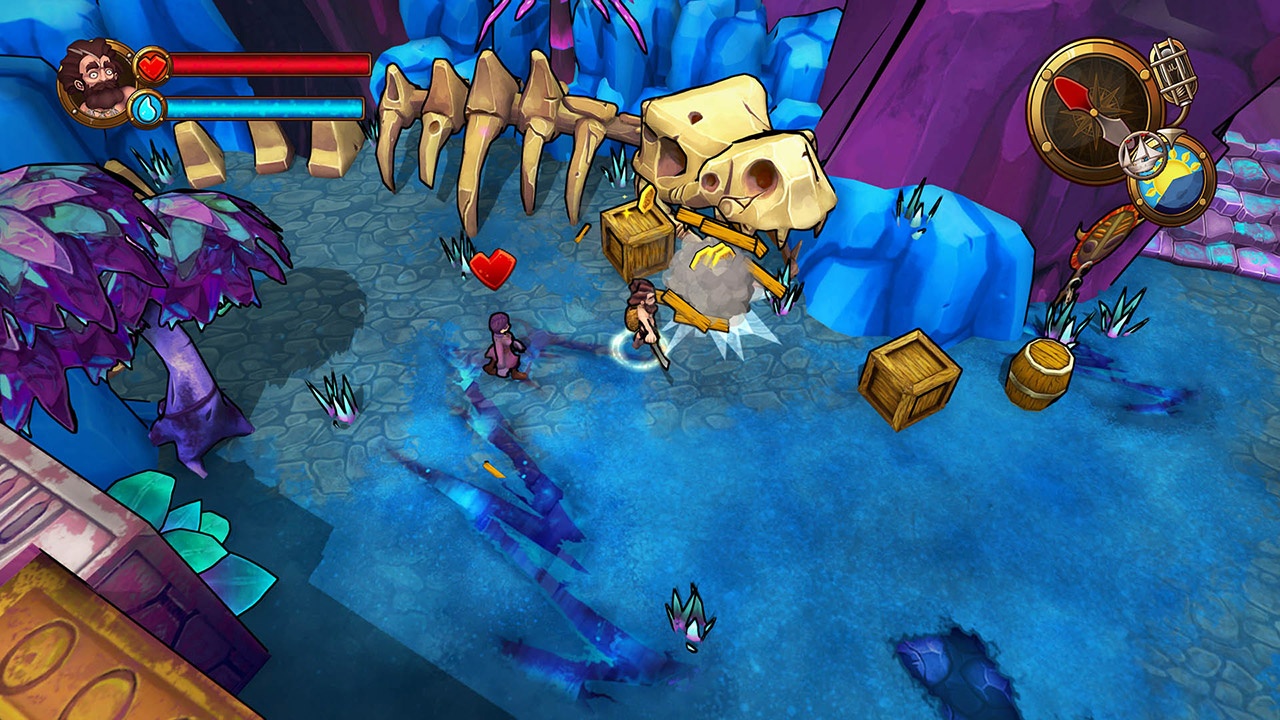 There is a vast ocean within the depths of independently-developed titles that are currently being washed up upon the shores of the Nintendo Switch. With every new game that is added to its ever-expanding library, it has become more important than ever for developers and publishers to produce a game that contains enough elements in its gameplay, content and mechanics to make it stand out from the crowd; whether it be a shooter, role-player or puzzler. So, how does Lost Sea, a rogue-like, action-adventure game, developed by Eastasiasoft with publishing through Ratalaika Games, fare against the swell of a saturating market? Does it simply live up to its name? Or is there enough variety here to help keep its head above water?

The story of Lost Sea revolves around finding yourself stranded on a mysterious island after your aircraft crashes in a freak storm. Although seemingly alone, you soon come across another stranded soul who informs you that you have become lost in another dimension due to the natural phenomenon of the Bermuda Triangle.  In order to escape from the archipelago of islands that litter the seas around you, you need to explore the islands in order to recover a series of ancient tablets that allow you to traverse the ocean and also determine the region of islands that are available for you to reach. However, this isn’t simply a case of plain sailing, as each of the locations contains a variety of monstrous beasts that try to hamper your progress of exploration. Help is at hand though, as scattered throughout these tropical regions lies a number of, similarly, stranded NPC’s who can be enrolled to join your crew in order to provide some skills and boost attributes. 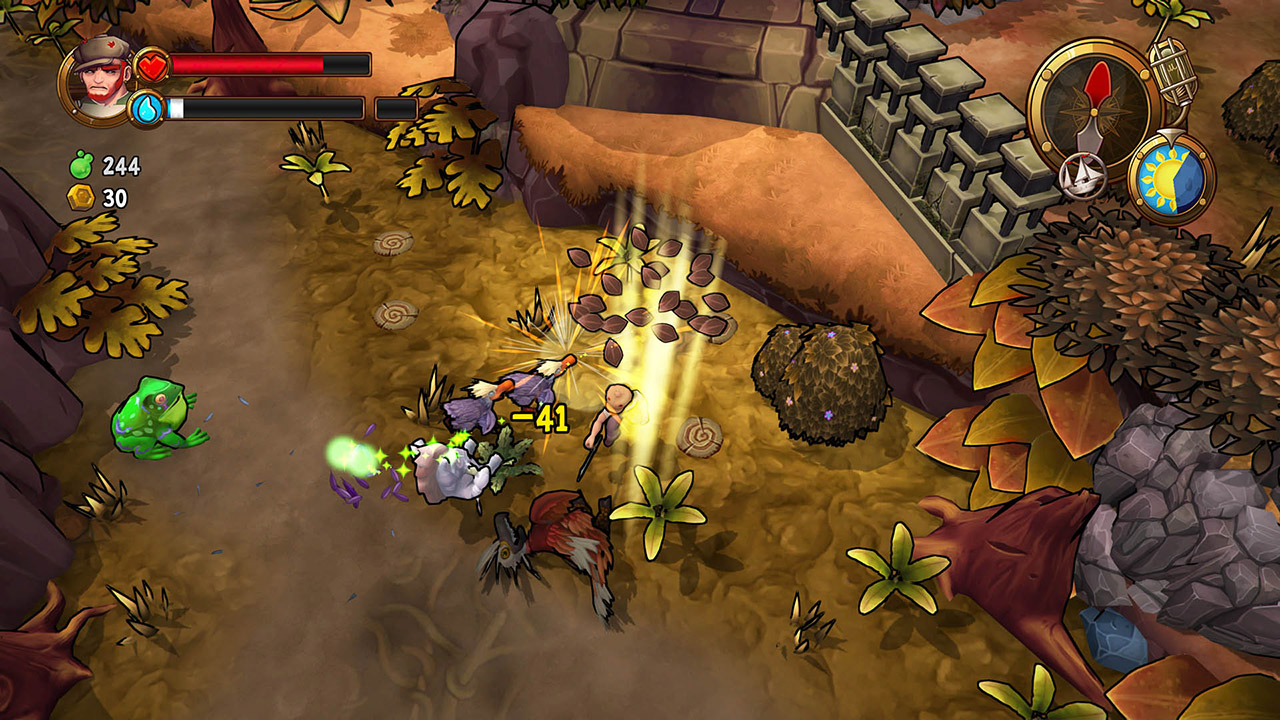 It’s a very simple premise, but one that works surprisingly well, although the depth of its gameplay mechanics can feel a little shallow at times. However, the challenge of this title comes in the element of its rogue-like features that include perma-death, procedurally-generated landscapes and a loss of hard-worked progress; although this can be limited, to a certain point, with the start of a new game presenting you with some bonuses to help alleviate the frustration of starting over again. These bonuses largely depend on your success from your last play-through, with tablets, coins and crew members contributing to the level of resources available. These elements become an integral part of the gameplay with some crew members possessing buffs such as extra attack power, more health, building skills and enhancing abilities, such as opening the variety of treasure chests that can be washed ashore. As well as providing stat boosting capabilities, these NPC crew members can also carry any found tablets to the power banks that frequent the makeshift ports upon where you can dock and embark around the varying islands.

Adding together all of the elements of the title’s gameplay and components produces a varied mechanic that entertain through combat and exploration; at least on paper that’s the premise of it. Your adventure starts with the option of picking a central character from a varied selection of models. Despite some elements of diversity in their appearance, there are no other distinguishing features that separate them; leaving this method of selection a purely cosmetic one. Things do pick up with the exploration of the islands though; especially with their procedural generations, although their aesthetic presentation can lack in some variety. Unfortunately though, combat doesn’t fare so well. Its mechanic is quite simplistic and basic in its execution; there isn’t a great deal of variety in the attack options or weaponry at your disposal.

This clunkiness in its execution becomes more prevalent as you progress further with each series of islands providing a boss battle, or new areas providing an even tougher challenge. With its rogue-like mechanics, this is a title that soon becomes gruelling in its challenge, although with some patience you can develop a decent strategy with learning attack patterns and utilising your crew to create a good combination of abilities and buffs. The exploration element of the gameplay provides a calming, relaxed tone to the proceedings and the combat can be fun; it’s the overall mechanic of the gameplay that can be frustrating in its execution with a very repetitive nature to its aesthetic and design. 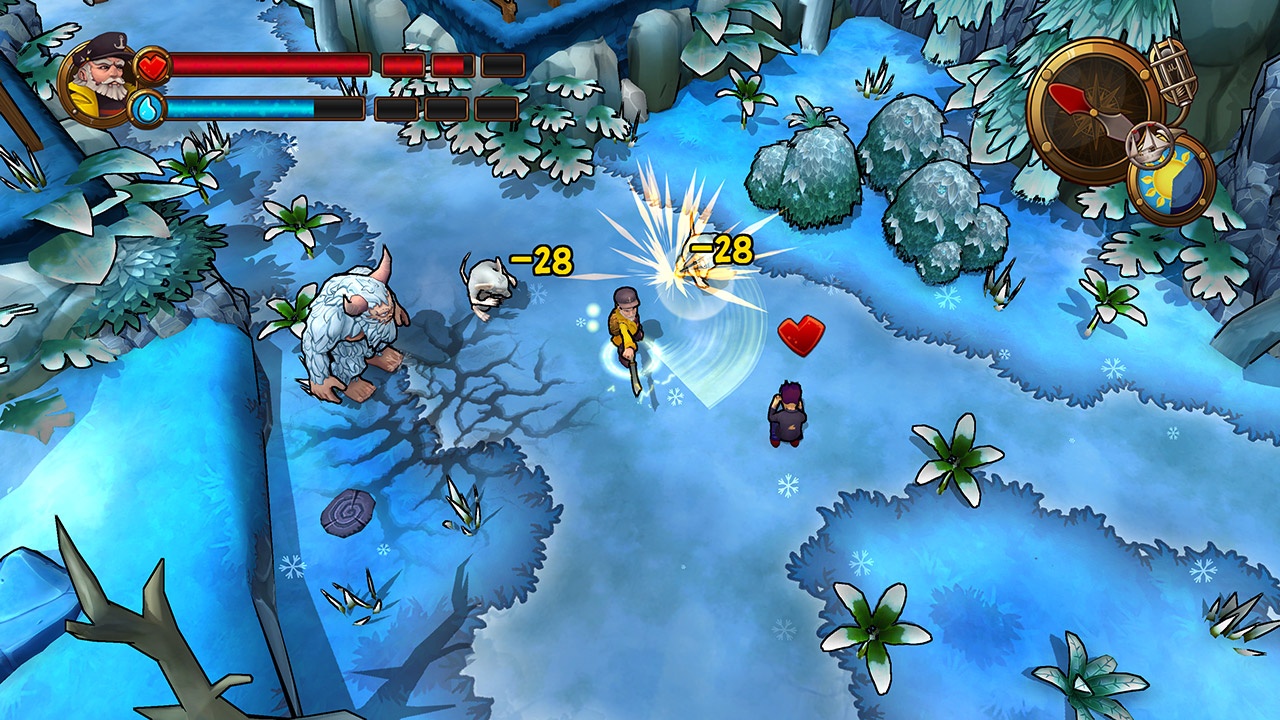 The overall presentation of Lost Sea offers a bright and vibrant look to the proceedings; especially with its cel-shading that feels very reminiscent of the Borderlands series of games. Viewed from a top-down isometric view and rotating camera angles, your field of vision presents a good range within in your immediate vicinity making it easy to spot branching paths, hidden chests and approaching monsters. A handy map also marks areas of interest and undiscovered regions; a mechanic that can be further boosted through the purchase of enhanced abilities that can highlight tablet locations and treasure chests found on the island. Sound effects are basic and minimal but the soundtrack offers a suitable jaunt with its adventure-esque tones.

Overall, Lost Sea does contain a lot of elements that are fun to play and explore. However, what the game doesn’t offer is anything particularly new; in fact, despite containing many elements, everything on offer is simply executed with a run-of-the-mill mechanic. It’s by no means a bad game or unplayable, it’s just not particularly exciting. However, saying that, this is easily a game that you can sink a fair, few hours into, especially with its rogue-like components; although this can also lead to some frustrating moments with its gruelling, almost unfair, challenge to its progression. As a switch game, Lost Sea sits nicely upon Nintendo’s console with its casual play-style that suits the portability of the switch’s handheld mode. For its pricing, this is easily a title that can be recommended as it does offer superb value for money and it’s this that is probably the game’s saving grace. It may not be to everyone’s taste, but if you do pick this title up and it is to your liking, then this is a title that will most certainly entertain for a long time. However, if you’re not too sure when you first play it, then give it time and learn its mechanics and the game will soon grow on you; though just make sure you’re prepared for a stormy voyage that will swirl a whirlpool of frustrations with the harshness of its rogue-like progression.