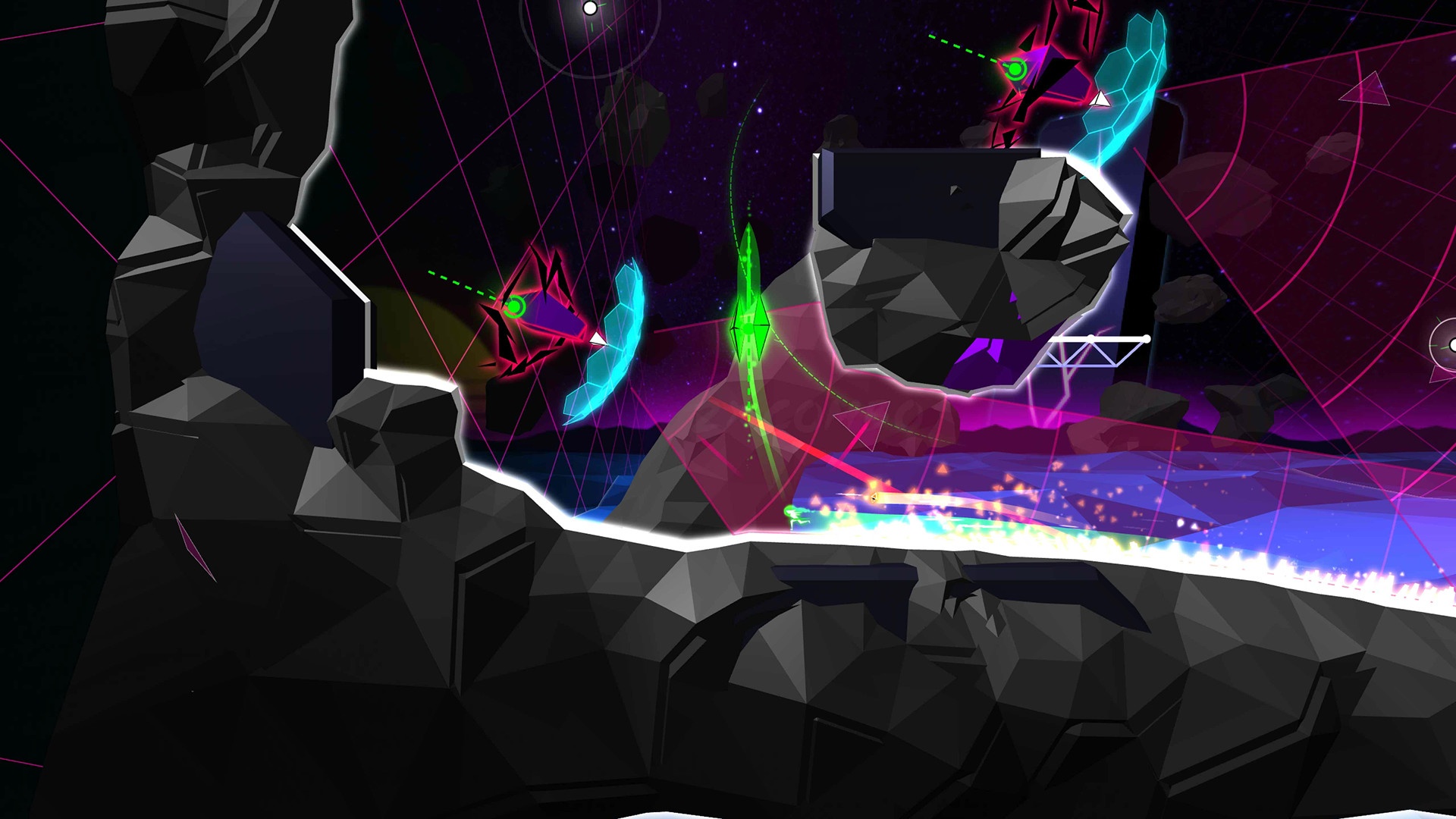 Rifter is a high-octane platformer that takes speed and precision to a whole new level within the genre. As soon as I started playing Rifter, I knew I was in for quite a ride. The soundtrack, the neon-esque aesthetic, and the high-speed platforming that relies heavily on momentum complement each other perfectly. For the most part, everything feels very engaging right from the very start.

For a platformer, Rifter presents a surprising effort in showcasing a narrative alongside the core gameplay loop. You play as a rifter, whose only purpose is to crack open rifts in planets of the solar system. The objective in each planet is to complete every stage and expose the 4 towers that must be destroyed in order to successfully clear out that planet. At first, everything seems pointless, with the exception of your companion Tiny, an extremely friendly drone that is always by your side in order to teach you the ropes of the game and cheer you along the way. However, as the game’s difficulty ramps up, so does the game start to reveal some details about the world.

In each level, the objective is always the same, traverse a bunch of obstacles until you finally find the rift and break it. Sounds easy enough in theory, right? Still, Rifter is not really your typical platformer, so there is more to this than what it might initially seem. In terms of level structure, Rifter’s stages are composed of a series of different challenges that are all seemingly interconnected. There are parts where you will have to rely on your fast reflexes in order to swing your grappling hook precisely, but there are also some areas where you need to activate certain switches in a specific order while racing the time, almost like a puzzle of sorts. Besides that, every now and then you will also run into some sections of the level where there is a lot more space to move around, and usually, you will find yourself facing a few waves of enemies here.

In each level there are these shards that you can pick up, usually tucked away in hidden places, that act as currency. They are divided into three different categories, pink, green and orange, and they can be used at the lovely “A to Z’s Rifter Support” shop to buy upgrades, like increased boost speed upon activating your hook, faster ledge climbing, being able to jump on water, among a few other things that will make your life a whole lot easier. There is also a specific type of shards that will allow you to unlock a few lines that expand on the lore of the game. On top of all that, there are also these optional levels that pretty much only exist to provide you with more shards, but these present a much bigger challenge than the rest of the planetary stages. 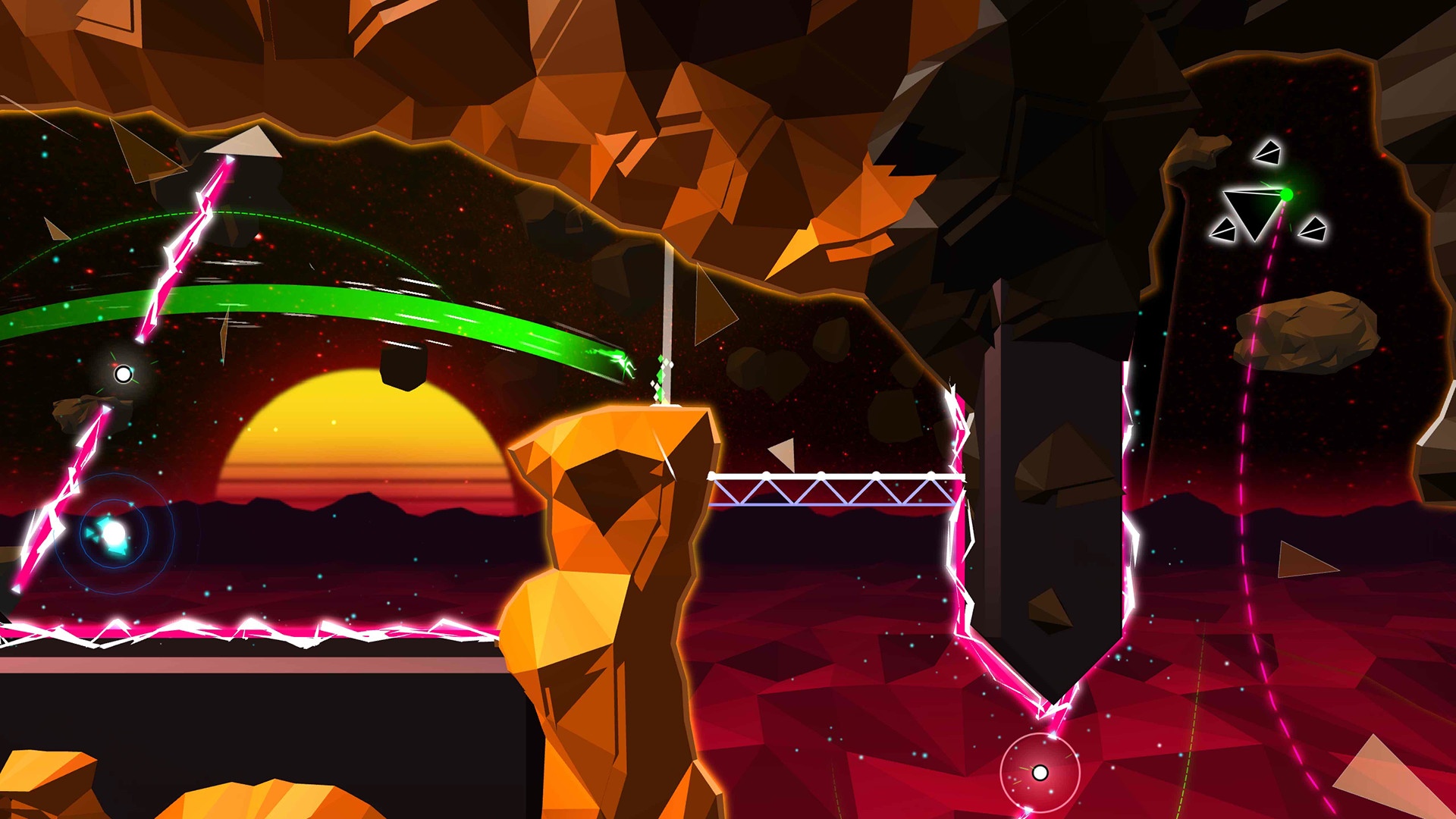 Now, the movement system is where Rifter really excels in delivering an absolute blast of an experience. Scattered around the levels there are these nodes that you can latch on to with your grappling hook, and this is the most fundamental gameplay aspect of Rifter. If you can’t manage to build up momentum by swinging between different nodes, then you are out of luck. The game will do everything to throw you off course, and given the game’s inherent high-speed, you will need quick reaction times in order to perfectly make it through a level on your first shot. There are mines, hazardous water, electrified walls, chasms, and even drones that hunt you down that you will have to avoid in order to be successful.

The game clearly isn’t combat focused, even though the continuous introduction of new enemy types might make it seem like it is. Instead, running, dashing, and swinging, represent the Trinity of Rifter. I must admit that it took me a while to get used to the swinging mechanic, especially the way that you can use it in order to propel yourself in any direction and use it to exploit enemies weak spots.

Unlike the vast majority of platformers that I have played, I found Rifter to be best played with a mouse and keyboard, simply because you will have to do really precise jumps and time your grappling hook in very tight time frames. With that said, once you finally manage to successfully chain and execute a bunch of swings perfectly that allow you to go from the start of the level until the very end, it feels extremely satisfying.

Throughout the game, you can clearly see the difficulty ramping up slowly. The first planet is an absolute cakewalk, while by the end of the second planet you can clearly see that things start to get tricky thanks to the introduction of some new things that you need to watch out for. Now, once I got to the third planet, I struggled right from the very beginning to make any significant progress. This isn’t to say that I had no idea what to do, because I did, it’s just that the difficulty curve clearly surpassed my skill level. By this point, not only my skills as a rifter were being tested, but also my perseverance. 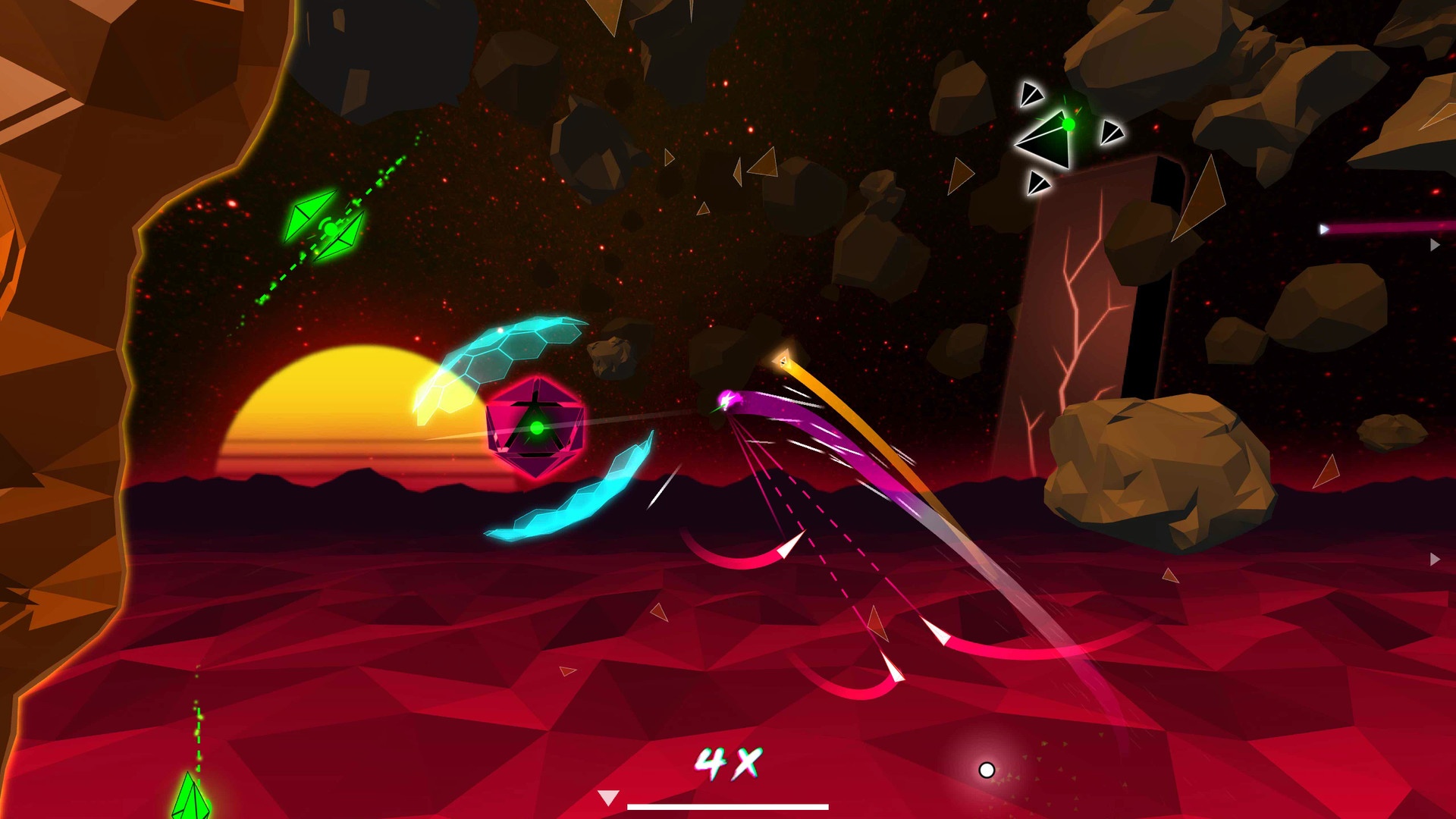 This is not an easy game by any stretch of the imagination, and that is sure to dissuade some people who are looking for something more casual. The game does provide some conveniently located checkpoints that allow you to get back into action right after you die, without resetting your progress. However, each checkpoint only grants you a small number of lives, which, if expired, will send you back to the beginning of the level. The game also has in place features that you typically see in games that focus on speedrunning, like combos, and online leaderboards, and I’m pretty sure that Rifter will please that type of audience.

The game’s neon-esque aesthetic fits perfectly with the synthwave soundtrack, and when you combine the thrill of when you are moving at a really high-speed with Zombie Hyperdrive’s Red Eyes blasting on the background, and you are blazing past this stage that looks like it has been pulled out of a stereotypical 80’s scene, that’s when the game really shines.

Overall, despite the steep difficulty curve, Rifter is one hell of a game. It’s a frantic platforming experience whose quality is comparable to its theme and soundtrack. An absolute blast to play! However, those that are looking for a more casual platformer might want to look elsewhere.