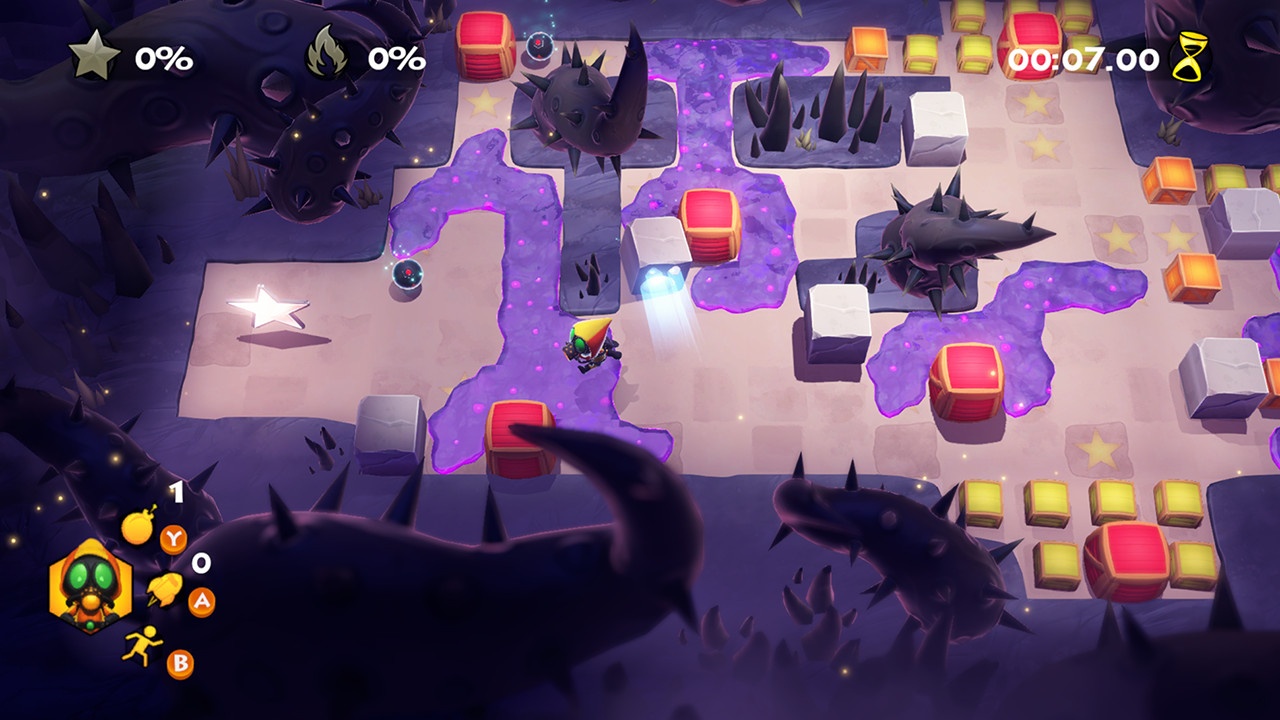 When I was younger, my parents always told me to never play with fire. After all, I didn’t want to get my hands burnt, or anything else for that matter. However, with Burnstar, a new action, adventure puzzler out now on the Nintendo Switch, I’m actually being encouraged to go against what my parents ever told me. It’s okay though, as it’s all in a good cause, namely to save the world from the threat of the Evil Inc.

Developed by Nerve Software and published by Gearbox Publishing, this pyrotechnic puzzler pits you against an evil corporation that is polluting the home land of Burnstar with a corrupted goo. Luckily, this stuff is all flammable and it’s up to you and your friends to blow it all sky-high, clearing each of the areas and bringing harmony back to the infected land. The game gives you the option to play as one of four different characters; each one possessing unique capabilities to help combat the threat from Evil inc. Depending on which character you choose, you can utilise personal powers such as dash, force field defensive measures, manipulate ice and even create a clone of yourself or teleport around the levels.

Each of the levels, around eighty in total, are presented in a grid, or maze-like format, with a variety of obstacles that stand in your way. Using a series of limited colour-coded bombs, each one relevant to whatever character you control, you strategically place your explosives, much like as you would within a Bomberman game, in order to make best use of its burst of flame to help rid the level from the goo and open up areas that may be blocked off. However, some levels also contain elements that can help you, such as cannon blasts to destroy walls or crates, but they can also house a variety of hazards too, such as circular saws that need to be avoided. 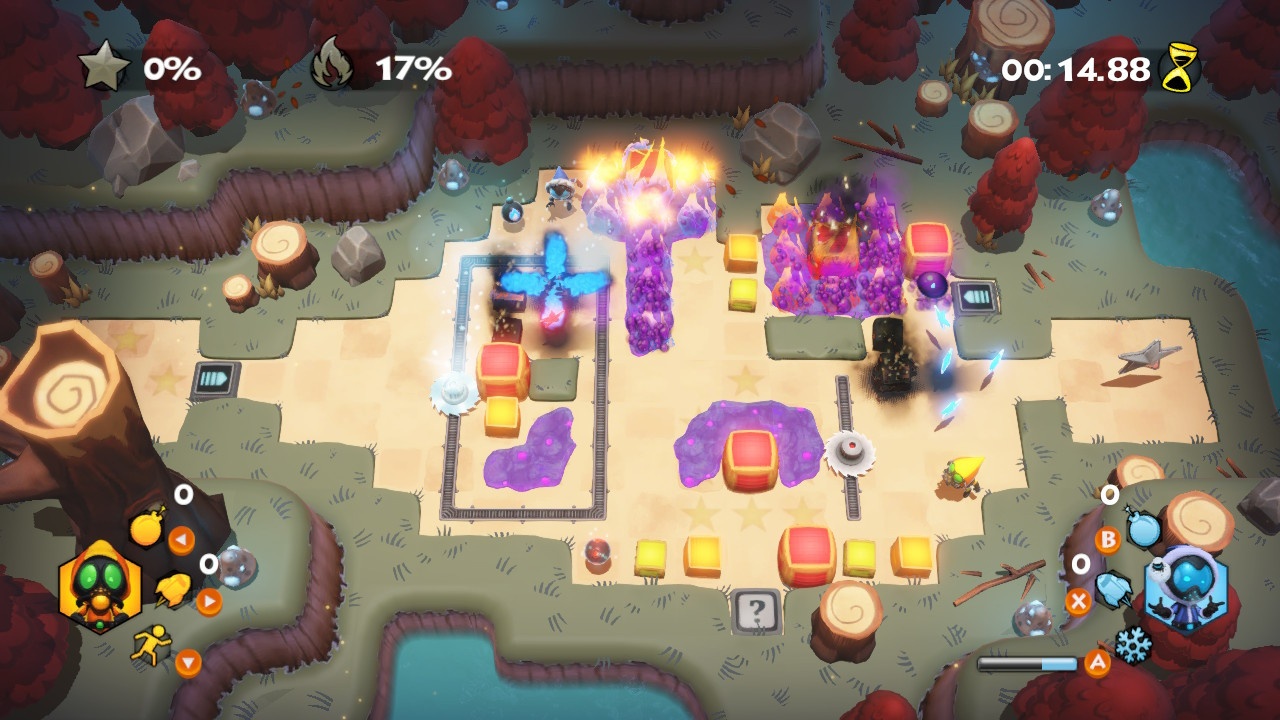 As you place your bombs and eradicate the level of the Evil inc’s goo, it produces a series of stars that need to be collected. Once a certain percentage of these have been acquired, it unlocks a larger star within the level, which when retrieved, advances you onto the next stage. Be warned though, place your bombs in the wrong place, where its blasts doesn’t maximise its full effect, such as destroying enough goo to collect the required amount of stars, then the level remains uncompleted and you’ll need to retread old ground in order to produce a better tactic.

Upon each levels’ completion, you are awarded a total score that is determined by a number of factors. Stars collected, time taken and eradicated goo all count towards a level percentage. Collect all the stars and you achieve one hundred percent and vice versa. It’s not a requirement in order to complete the level, but for perfectionists, it’s a puzzlers nightmare as you go back to achieve a one-hundred percent satisfaction. Although it can feel repetitive in its nature, it’s an element of the game that adds replayability and longevity as you revisit previously completed levels in order to attain a perfect run.

As well as being tasked with clearing each level of the intoxicating goo, some stages also present you with a series of boss battles. These offer a nice break from the puzzle routine, often turning the tables on you, as in one particular level, a clone of yourself plants bombs in an effort to destroy you. Placed within a maze of flammable boxes, do you not only have to collect the stars left behind from the explosions, but you also have to dodge the walls of flame that your nemesis produces. It created an exhilarating affair, with a sense of urgency as you multi-task your way around the level until the required amount of stars has been acquired. 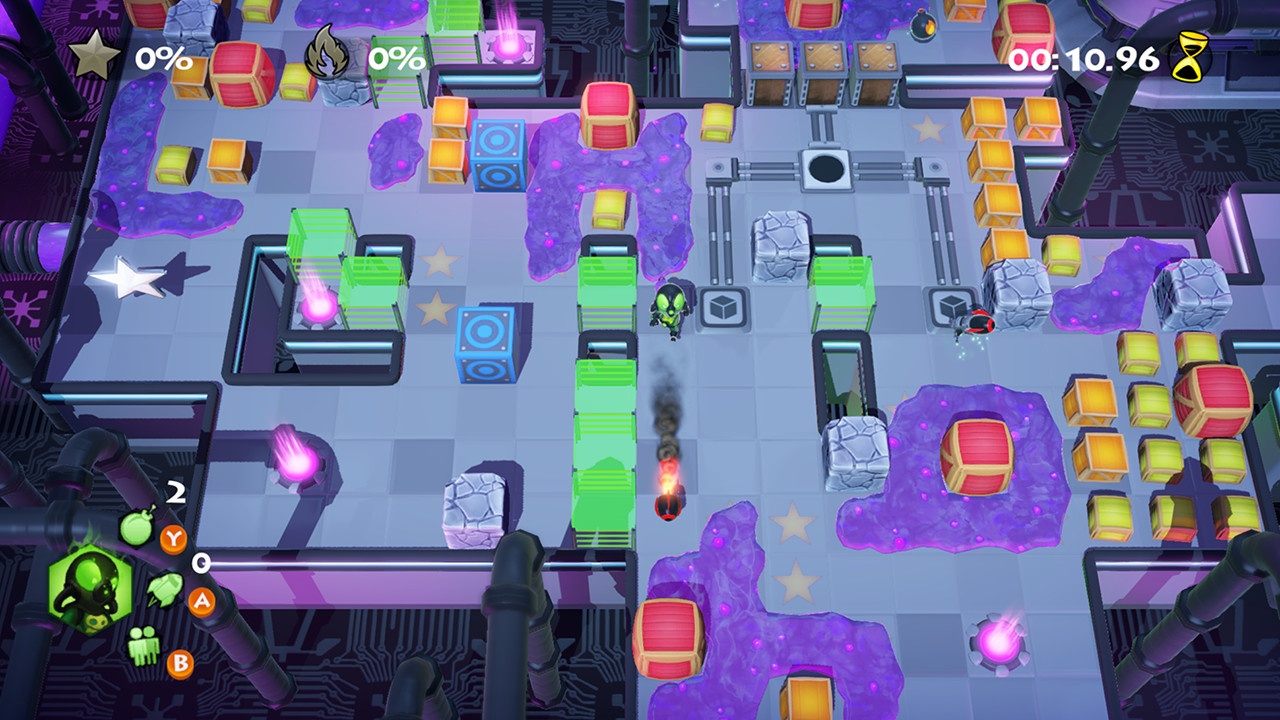 Each of the puzzles that are presented to you offer nice, bite-sized chunks of gameplay, making it a suitable game for casual players. It’s presentational values are crisp and clear, with nice looking cut-scenes and precise level designs. As well as a need for tactical planning to find the right solutions, you also need to act fast to make the best use of your time. However, your efforts can be duly rewarded with your best times being posted on online leaderboards and secret levels being unlocked as you progress into the game. Its different elements of speed, concision and puzzles produce a decent challenge, but one that rarely feels unfair or impossible to work out and often containing multiple paths to success.

The game also offers a local multiplayer element for up to two people. This co-operative mode adds a lot more variety to the game with each character being colour-coded to corresponding bombs that only they can use. It requires a good sense of communication with each other and careful planning, as you both work together in clearing each of the levels. This extra layer to the playability of the game adds a new element to the gameplay, as well as extending the life of the game with replay values. It never feels messy, with clear and distinct visuals that make it easy to determine what is happening with the on-screen action. It’s all suitable bolstered up with effective sound effects and pleasing soundtrack that doesn’t grind or feel tiresome.

Overall, Burnstar presents a nice little puzzler that contains a uniqueness in its mechanics, as well as offer an abundance of gameplay values and replayability options. It’s instantly accessible and fun to just pick-up-and-play, making it an ideal casual game; either alone or with a friend or family member. Although the majority of levels can be easily completed to one-hundred percent with careful planning, or a quick re-visit, some of them do provide an interesting challenge that requires some tactical thinking; especially when it comes to the, quite frankly, exciting and very well thought out boss battles. It provides a good form of entertainment, with a balance that never feels too hectic or too slow. In short, if you’re a fan of puzzlers with a bit of action thrown in, then this is a game that you’re sure to have a blast with.

Burnstar presents a nice little puzzler that contains a uniqueness in its mechanics, as well as offer an abundance of gameplay values and replayability options.