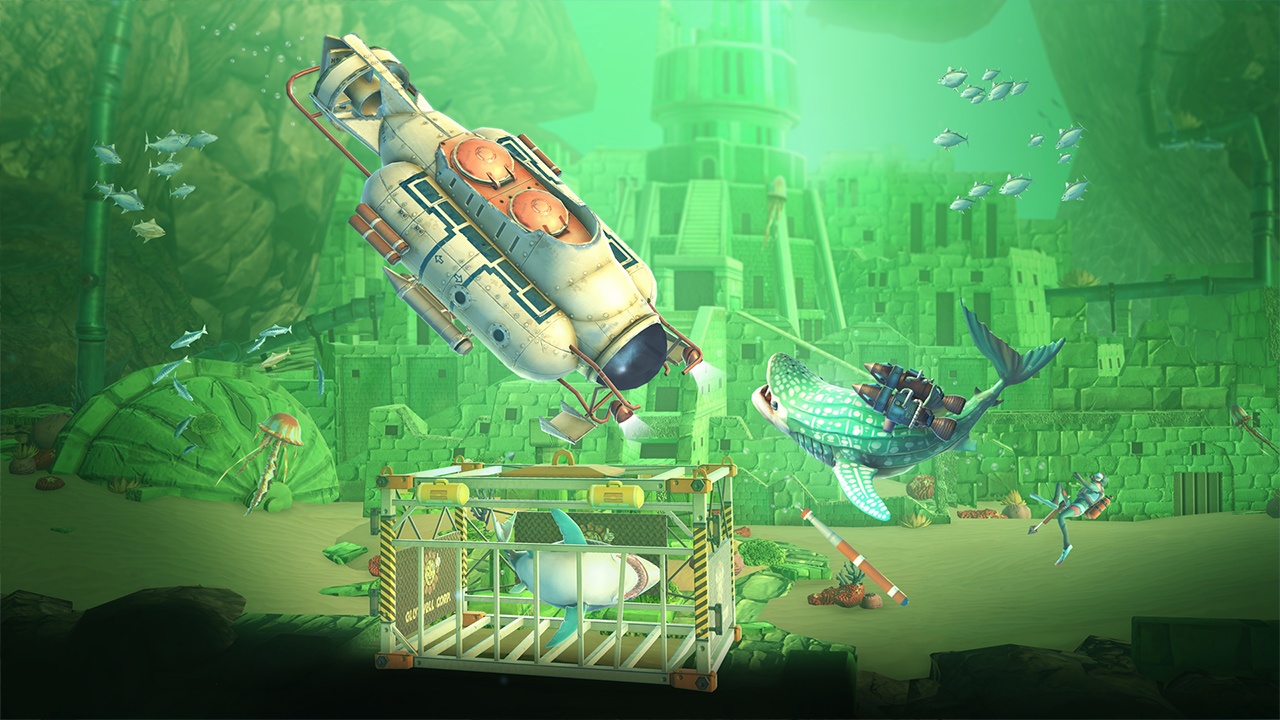 I would imagine that the majority of people who have seen the movie Jaws, dipped their toes with trepidation the next time they went near the water. I know I did! However, now I can turn the tables on my fears and become one of the most successful predators on the planet with Ubisoft’s Hungry Shark World, as it leaps and gnaws it’s way onto the Nintendo Switch in a feed-frenzied, gore-fest.

Developed by Ubisoft’s Future Games of London Studio, this reworking of the 2016 mobile game now comes without the need to purchase micro-transactions, remodelling itself with an XP mechanic, in order to level up and acquire all manner of shark species to chomp your way through a variety of four oceanic levels. The main premise of the game requires you to stay alive for as long as possible, feeding on whatever morsels you can find to prevent starvation, as well as avoid all manner of underwater hazards along the way.

This is achieved by guiding your shark through a myriad of underwater crevices, along with the occasional leap top-side, by using the left thumb-stick; all the time chomping on all manner of marine-life and boosting around the environment with ZR. However, when it comes to other sharks, human morsels and larger fish of the aquatic model, a bit more jaw action is required as you gouge your way through your victims with the power of the ZL shoulder button. A couple of meters display your life and hunger levels, the latter of which steadily depletes, forcing to you feed continuously like the blood-thirsty machine that you are. 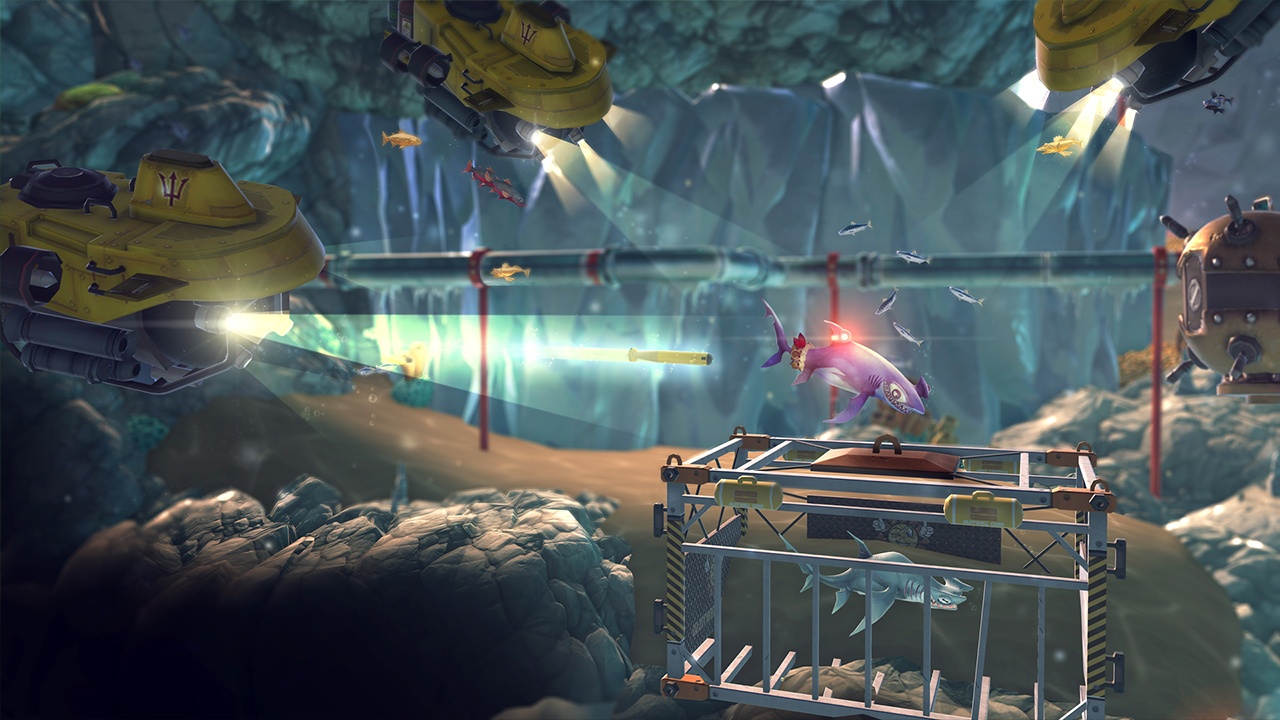 You start off with the Porbeagle species of shark, along with a set criteria of ten mission objectives that you need to complete within the infested waters of your hunting ground. Achieve these and you gain XP, which goes towards unlocking a variety of accessories, as well as awarding you with different species of shark; each one progressively bigger, badder and more terrifying to behold. You soon learn that this mechanic becomes a necessity as these larger predators can gain access to previously unreachable areas, as well as take on some of the more dangerous foes that habitat your environment.

Mission objectives come in a variety of forms, such as consume a certain amount of birds, find hidden letters, treasure chests and fossils, devour specific marine life and survive for a set amount of time whilst wearing a tutu! Yep, you read that right, whilst wearing a tutu. This makes accruing XP all the more important, as by levelling up, you unlock a variety of cosmetic features that not only go towards mission completions, but also grant a number of boosts involving percentage gains to XP, buffs to a variety of stats and monetary increases to the values of treasure found; another important element to the gameplay that is required to purchase unlocked items.

Keep your hunger at bay by devouring everything beneath, as well as above, the waves and you’ll increase your score multiplier; eventually leading to the trigger of a gold rush bonus that earns you big points from everything that you eat. You can even pull off a mega gold rush at various times, enabling you to polish off anything that lays within your path and even has a potential to transform you into a giant beast that literally eats everything that is on the screen. All of these elements combined, produce an exciting and enticing level to the gameplay values of this title, as well as offer a fun experience in the game’s casual capacity. 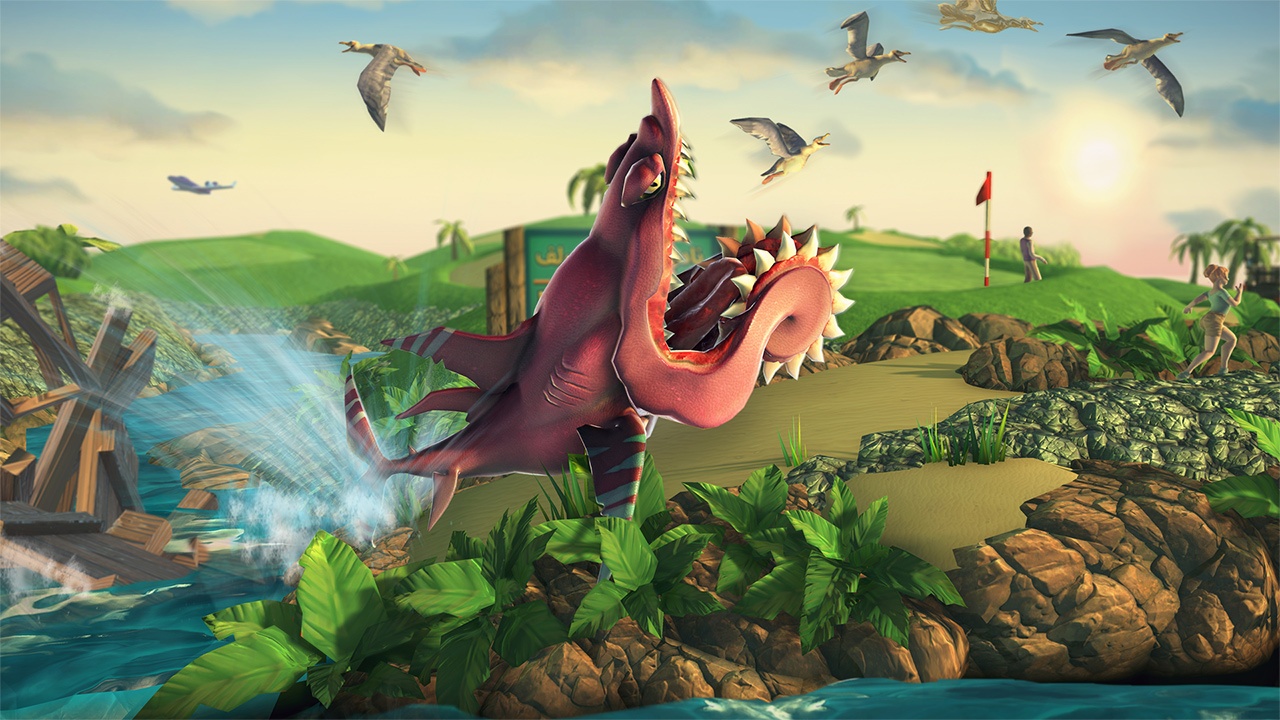 Everything here is presented in a very pleasing style. Ocean environments are teeming with all manner of life, as well as containing a very colourful palette that produces a very clear and concise environment. Menus are also easily navigated, again with a bright and clear aesthetic in their presentation. However, despite its inviting appeal with its graphical presentations, successful kills stains the crystal waters with clouds of red blood, as the human forms of prey scream for help and beg for mercy in the most horrifying way; taking away some of its appeal in being a family-friendly game, although nothing here is particularly gory or over-the-top in its presentation.

It’s gameplay mechanics and bite-sized levels, or missions, make this a superb casual affair; one that sits nicely upon the Nintendo Switch. However, its accessibility and ease-of-play can also be hampered with some lengthy load times; creating a fragmented experience that can frustrate. This can be further bolstered with the occasional technical hitch of force closures; although hopefully this random crash can be patched out some time in the future. It didn’t happen often, or every time I played, but it happened enough to be a concern and something that was worth mentioning within this review.

Overall, Hungry Shark World presents a nice little time-killer upon the Nintendo Switch with its casual style of play. It can’t escape a form of repetition, as the main premise of the game remains the same. However, with twenty-five different varieties of shark, some of which are truly monstrous and with ten mission objectives for each species, as well as a generous amount of unlockables, there is plenty of content here to keep you playing over the long-term. A few technical glitches aside, the general gameplay provides a fast and fun experience; one that contains that one-more-go mentality as you strive to complete mission objectives, unlock new sharks and survive for the longest time possible. It’s graphical appeal is one that looks particularly effective on the Switch’s screen, especially in its handheld capacity and is one that would easily appeal to younger audiences. However, it’s blood-inducing kills and cries for mercy, although not terrifying or scary, could still be enough to upset some children, but saying that, mine were fine with this graphical representation. For its price, this is easily game that will entertain and certainly a title that contains a lot of bite.