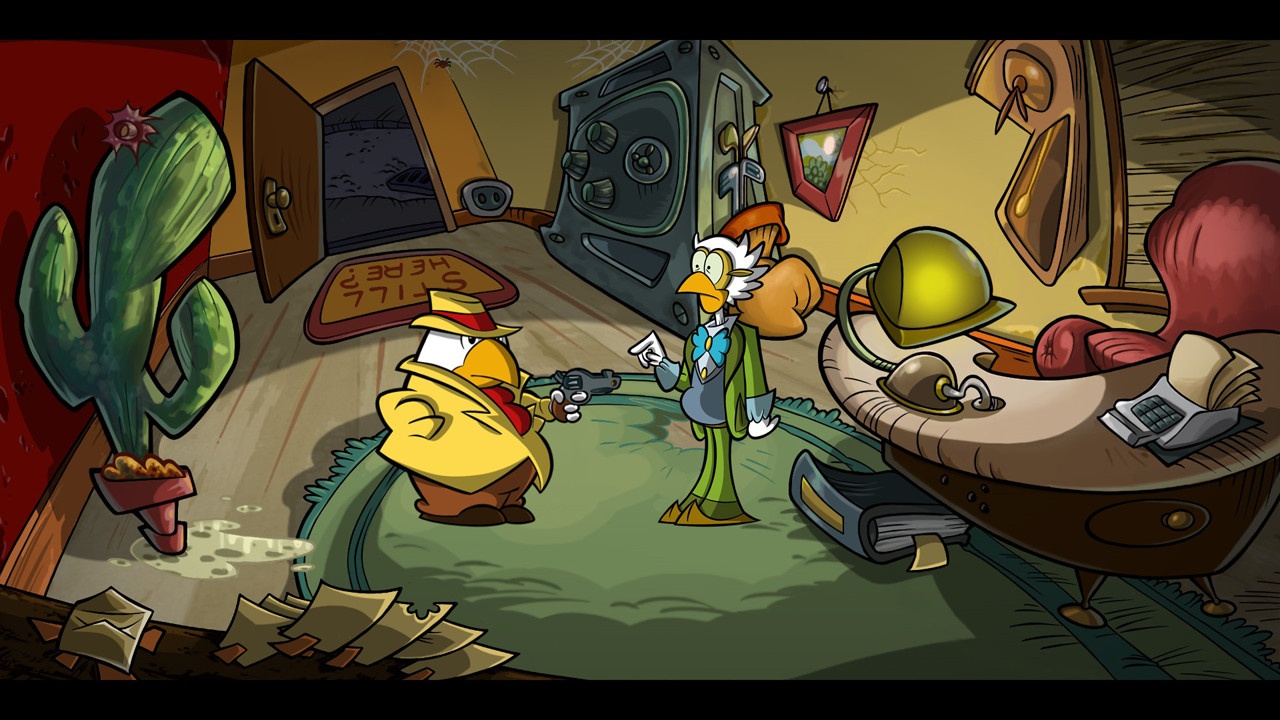 Point and click adventures today have a bit of a weird curve to them when it comes to difficulty and problem solving. There are essentially two camps: those from the LucasArts era and those from the Humongous Era. Plenty of gamers in their 30s and 40s grew up with things like Monkey Island, Maniac Mansion and Loom. Younger players may have started with things from the Humongous catalog, like Freddy Fish, Spy Fox and Pajama Sam. Using these as stepping-stones, if you continued to enjoy the titles, you’d get a chance to see the later years when Runaway and Broken Sword really took a hold, and then work your way into modern PnC which is all over the place. However, if you missed a milestone (or stepping stone, really), there comes a point where you can’t really go back and enjoy the older games: there’s certain fallacies and missing nuances that keep them from holding up today. Not the least of which is Putt-Putt, which is easy and you don’t have the same motivation as you used to. So, for all those who want to capture some of the wonder of the older games without reverting to easier play, I highly suggest trying Detective Gallo.

Detective Gallo is a slow strutting, hard talking, gun-toting private eye, and he just happens to be a rooster. Detective Gallo has had a hard time since his friend, MacKenzie, was…killed? Kidnapped? Something’s happened, and Gallo’s mourning the loss with a bunch of drinks and getting unceremoniously tossed out of the bar when he realizes a case has strolled into his office. Seems like a bunch of plants got slaughtered, and Gallo needs to figure out the why and the who. This leads down a strange path that explores the idea of plant assassination, flora slavery, confiding in a cactus and, the most dangerous killer of all…mold. Detective Gallo exists in a bizarre world that offers up zero apologies or reasoning for the lines of thinking that each character has, and why everyone is a bird, and why plants have such a big role in the world. In some ways, this is comforting: to have a game world that doesn’t feel the need to explain things that are expositional, but otherwise arbitrary is refreshing in today’s era of overly verbose narratives.

As we said up top, Detective Gallo is a point and click adventure where the biggest enemy you have to deal with is time and effort. Playable in either handheld or docked mode, Gallo emulates a mouse cursor to get most of the job done, and I HIGHLY recommend using the JoyCons in lieu of your finger. While the touchscreen controls are good for most of the moving around and interactions, it becomes a fumbling travesty when you need to get things out of the inventory or, God forbid, change the items that you’ve selected. And items are a huge part of the game, as Gallo will pick up somewhere around 50-60 different items throughout the course of his adventure. In comparison to some recent games, Detective Gallo also simplifies things to a much more straightforward path. In The Wardrobe (a recent PnC that I covered), each item that you can click on has a variety of choices as to what you can or cannot do, and it results in a lot of trial and error. Gallo, on the other hand, asks only that you click on an object/person to do the one thing they’re meant to do, and to use items on them to do the only other thing. This means that players aren’t going to need to fumble around, going through three other actions with a person before hitting upon the lucky fourth. You just do what you need to do. Mostly. 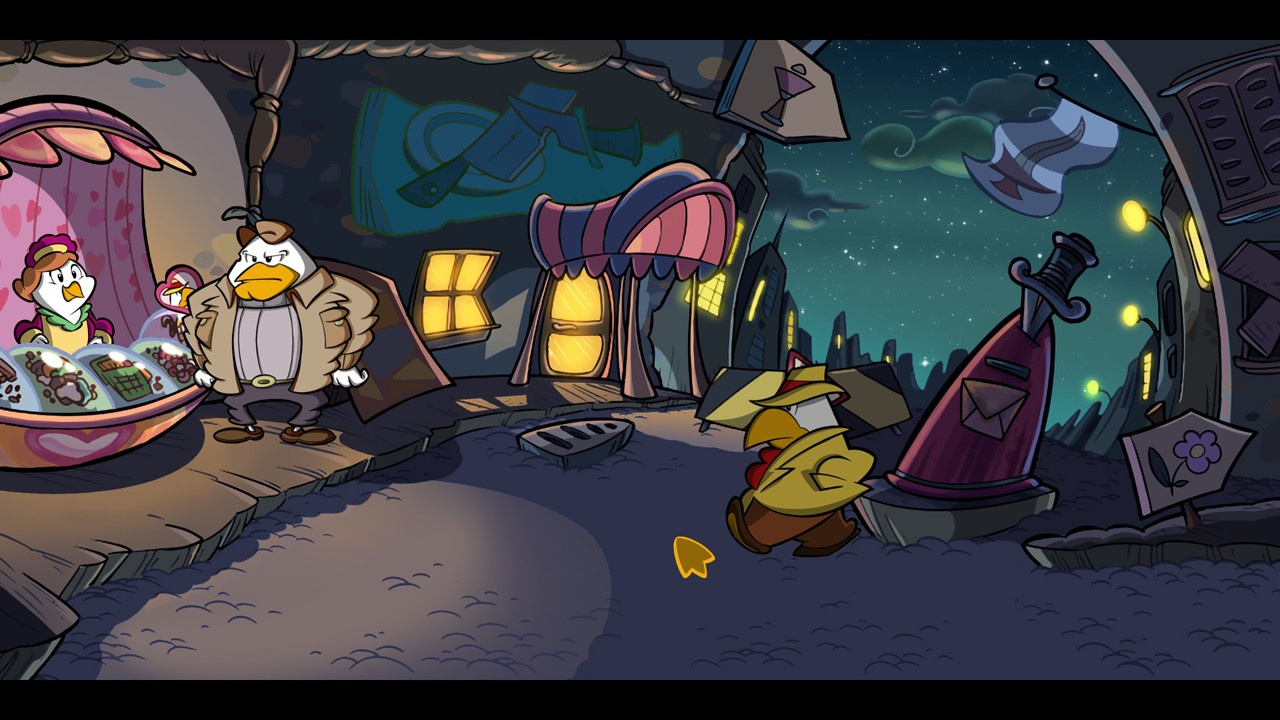 In terms of gameplay, Detective Gallo is a great throwback to the way many point and click adventures used to be, asking the player to just adhere to the classic rule: check everything. Gallo won’t waste your time by talking at length about how nice the bookmark looks, or how he can’t possibly expect a good answer by talking to the bookmark: click on it and he grabs it, simple as that. You talk to people, you look at certain things to trigger funny dialogue, and you pick up what can and should be picked up. Now, players who are coming into this game blind should be warned that Gallo will pick up everything that he can REGARDLESS of if he can use it anytime soon. There’s an item that you get early on that seems to have no use until it’s nearly the last item you ever use in the damn game. When an item finds its final use, it’ll disappear from your inventory (usually), so, if you’re still holding onto it, there’s a good chance you get to use it again. While some items are kind of obtuse as to what they need to be used for, there are quite a few that basically walk up and land in your lap with a tag that says “USE ME HERE.”

However, the “click everywhere” approach can sometimes backfire on Gallo. There are moments where the way is clear but the path is invisible, if that makes any sense. Take, for example, an early puzzle where you need to send a letter off to get a clue as to who may have killed the plants. You find an envelope in your office, easy peasy, and then you need to seal the damn thing. You can’t moisten it with anything, there isn’t tape anywhere, so you eventually gotta seal it with wax. Great, except for the candle needed to seal it is inside a mouse-hole next to the candy shop. What the fig? Or when you need to pay off an undercover cactus, and the item that you bribe with was in your inventory for the first 75% of the game…and you decided to put it back in your office right before you talk to him. The game has some weirdly illogical decisions, and they come across less as quirky and more as spontaneously head scratching. Luckily, Detective Gallo has his “Gallo Sense,” which allows him to quickly and easily identify everything in the room that can be clicked on. It really gets the job done, though it can make some instances too easy, so veteran players should use it sparingly.

Alright, but what about the characters and the story? This is a point and click adventure, after all. Gallo, as the lead, is pretty solid, bouncing between dryly funny and ridiculously serious about different aspects of the case. Well voiced in both English and Italian, he’s an intriguing character, looking a little cartoonish in appearance and movements, constantly talking to his cactus for advice, and solving far, far too many problems with his gun than he should. For a game that was ranked for ages 3+, I was a bit stunned by some of the material in the game, specifically shooting a vending machine to get results and drugging a store clerk with a hallucinogenic candy. But those moments are definitely overshadowed by the absurdist nature of a lot of it, and the rest of the 2 dimensional cast help round out the feeling of it all. The weepy victim who constantly bemoans the lost of his plants. The youngster with a pacifier and a burgeoning lust for crime. The doe-eyed candy peddler who has eyes only for Gallo (until she doesn’t, in one of the funnier side stories). The world of Detective Gallo isn’t big, but it’s fully voiced, has enough variety to it to keep you entertained, and there’s plenty of dialogue worth digging into and hearing in full. I can’t say there was anything that made me laugh aloud, but I got a few chuckles in, and I appreciated Gallo constantly adding new rules of his trade, even if they were somewhat contradictory. 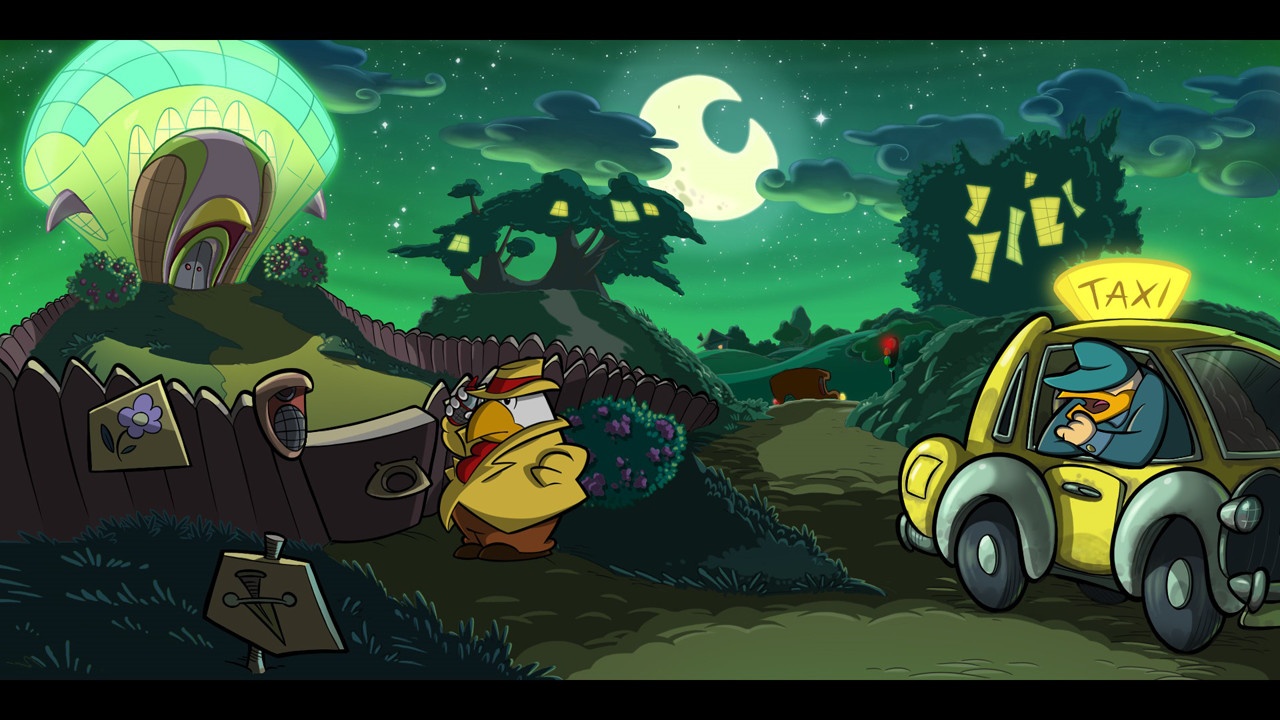 From start to finish, the story of Detective Gallo only took about four hours, and a bit of that was poking around in the wrong direction and some slight load times between the rooms. For the first bit of the game, there’s a taxi driver snoring outside of the crime scene, and his snores carry and hang in the air even as you transition into the next area. There were some audio glitches, if I’m being picky, like when someone else is talking and you start engaging with a different object, creating line collisions and people talking over each other. Thankfully, these instances where the effect was possible are small and infrequent, but it really threw me off my game. Additionally, once you get the story in full and find the curious but not totally unbelievable ending, there’s not a lot to go back to. There aren’t hidden achievements or extra cases. Gallo is funny and memorable, but the game’s playtime cuts down significantly if you aren’t poking around in the dark. The music is atmospheric and smooth, capturing the noir effect without going too dark, so there’s definitely something there. I gotta say, when a soundtrack is something that paints a gorgeous picture without pulling focus, that’s when the job is done right.

All in all, Detective Gallo is an incredibly well drawn, fun and funny trip down memory lane on a road I’ve never walked before. It captures all the exciting and engaging puzzle and problem solving of the games of yesteryear without needing to homage or nod towards them too hard. Gallo can stand on his own two feet as a solid character, and this game is a fantastic addition to the roster of PnC adventures. If you’re more into the hardcore, penalty based titles (such as Shadow of the Templar), then this might be a bit too tame for you. However, if you’ve got that itch to scratch that feels like a call to childhood, then this rooster is crowing your tune.

When a game is able to feel familiar while being brand new, the developers have done something right, and Detective Gallo feels so very right.