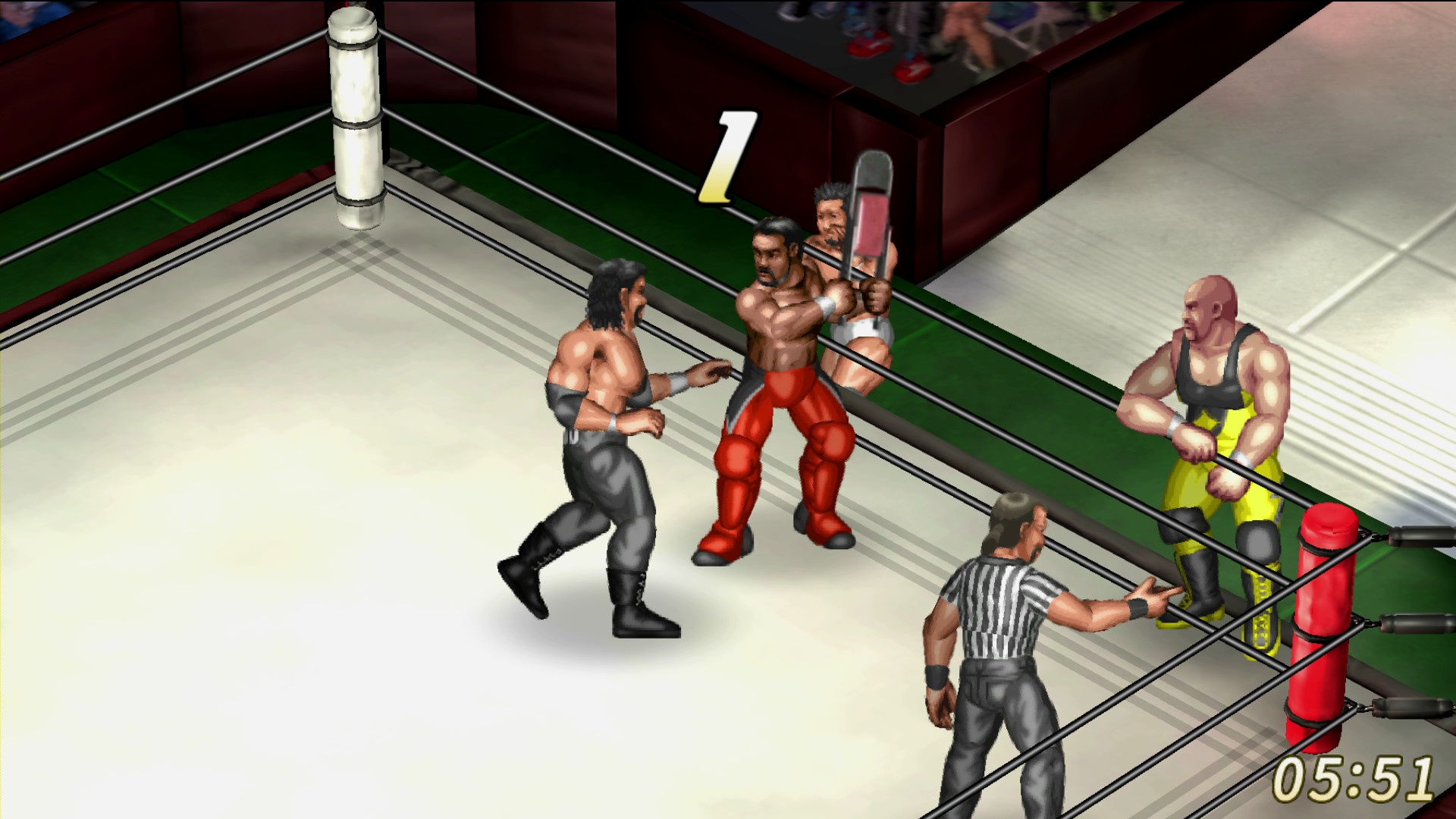 When I think of the best wrestling games ever made, my mind always jumps to the Asmik Ace Entertainment and AKI Corporation developed wrestling games on the N64 – WCW/NWO Revenge and WWF No Mercy always felt light years ahead of the competition of the time, and in my opinion, are yet to be bettered by the flashier but technically less refined 2K offerings. The only game that came close to capturing the essence of wrestling in the same way was an import copy of Fire Pro Wrestling D that I had on the Dreamcast. Despite not having an official license, thanks to some fantastic editing capabilities, a fantastically old school aesthetic and incredibly deep gameplay, Fire Pro Wrestling D became my go to wrestling game of that generation.

Despite its quality and continued success in Japan since the first PC Engine release way back in 1989, the Fire Pro Wrestling series has remained an almost exclusively Japanese series. There have been a few exceptions down the line with a  few of the Game Boy Advance releases making it to North America, but us Brits have largely been left in the cold. I know. I know – what about Fire Pro Wrestling on the Xbox 360? Well, that doesn’t count due to the fact that, a) it doesn’t look or play anything like any other Fire Pro Wrestling game, and b) it’s absolutely pants. Luckily, the same can’t be said of the latest iteration of the series, Fire Pro Wrestling World.

Not only is it making its way to the UK, but it also happens to be both true to the series’ roots in terms of design, aesthetic and gameplay, and above all else, is a genuinely fantastic entry in this little played but greatly revered series. Like the issue Pro Evo currently has of winning over entrenched FIFA fans swayed primarily by its array of licenses and extensive online features, so to will Fire Pro Wrestling World struggle to make a dent in the sales of the flashier but decidedly less nuanced 2K series of wrestling games. Still, if you’re looking for something a tad more old school, something with plenty of charm and a ton of depth, Fire Pro Wrestling World might well be the wrestling game for you.

It won’t be for everyone of course – the visuals are purposefully old school, visuals that combine detailed 2D sprites with relatively basic 3D backgrounds, and the gameplay, while on the surface rather simple, is actually fiendishly deep and rather unforgiving, but again, for everyone who doesn’t like the game for its purposefully old-fashioned design, I’m betting that there is another person who will love the game for just the same reason. 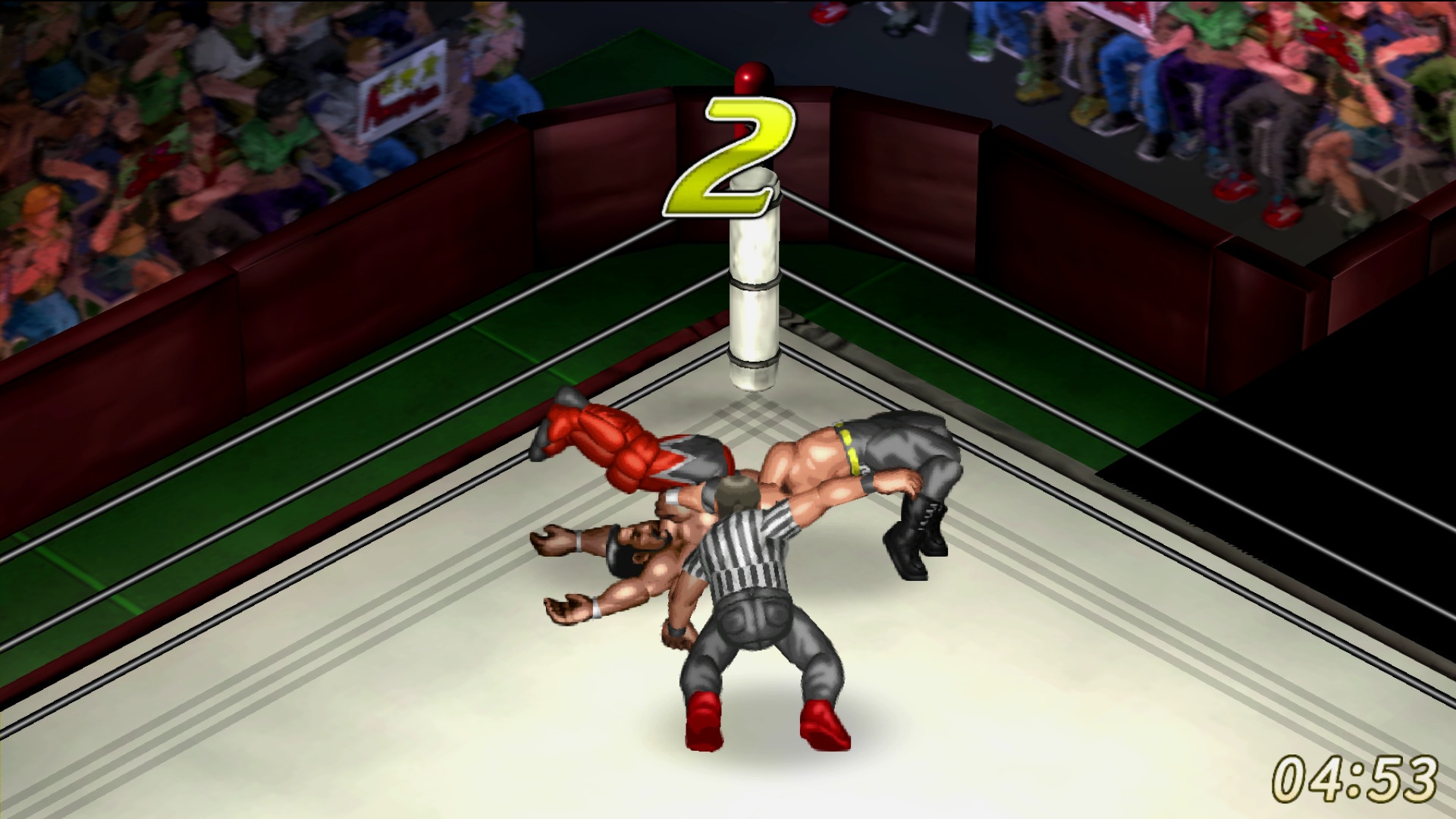 If you are new to the series, the first thing that will grab your attention is undoubtedly the games’ signature visual style – played from an isometric perspective and using relatively basic but utterly charming sprites for the character models (think Metal Slug and you’re halfway there), Fire Pro Wrestling World makes no apologies for looking a lot like a PS2 game – in fact, it looks almost exactly the same as the last game in the series released on PS2, Fire Pro Wrestling Returns. That probably doesn’t sound all that great on paper, but allow me to assure you – the game looked great then and it still looks great now.

Much of that comes from the brilliantly detailed character designs. While this is the first game to include the New Japan Pro-Wrestling license and the first wrestling game of any sort to obtain the NJPW license since Wrestle Kingdom 2: Pro Wrestling Sekai Taisen back in 2007, it still lacks the all-important WWE license. Luckily, Fire Pro Wrestling World is home to a fantastic set of creative tools that now include the ability for players to share their creations online. This essentially provides players with immediate access to just about every wrestler they can think of and a huge number of both real and fictional non-wrestling characters to boot. Sure, the total number of wrestlers available from the start is down from Fire Pro Wrestling Returns’ truly outrageous roster of 327 to a comparatively limited (but still rather extensive) 69, but when you take into consideration the fact that you can download user-created content from your PS4, your phone or a PC via firepro-w.com, this issue is essentially rendered null and void.

Whether it be creating your own or downloading others, the options available to add unique wrestlers, rings, events, factions, referees and custom belts is essentially endless. Honestly, if there are better editing tools out there, I haven’t seen them, and while I’m far too lazy to bother with such extensive options myself, the fact that others will, invariably means that I ultimately benefit from a near endless stream of brilliantly detailed and expertly crafted user-generated content.

It’s not just the editing tools though; the roster itself, while limited and undoubtedly niche, is a great introduction to the world of Japanese pro-wrestling and subsequently, a great excuse for the games’ ridiculous, but hugely enjoyable story mode (or Fighting Road as it’s referred to in-game). You might not know your Suzuki-gun from your Bullet Club, but when it comes to the preposterous story delivered here, that is unlikely to matter one iota.

The big draw for those relatively (or completely) new to the series however will almost certainly be the Mission Mode that, beyond being brilliantly entertaining in its own right, delivers a basic introduction to the game and its array of unique and surprisingly complex systems. Sure, it’s far from perfect and, like the game itself, can be a tad obtuse at times, but it’s still a decent enough training tool and will certainly help you get off on the right foot. 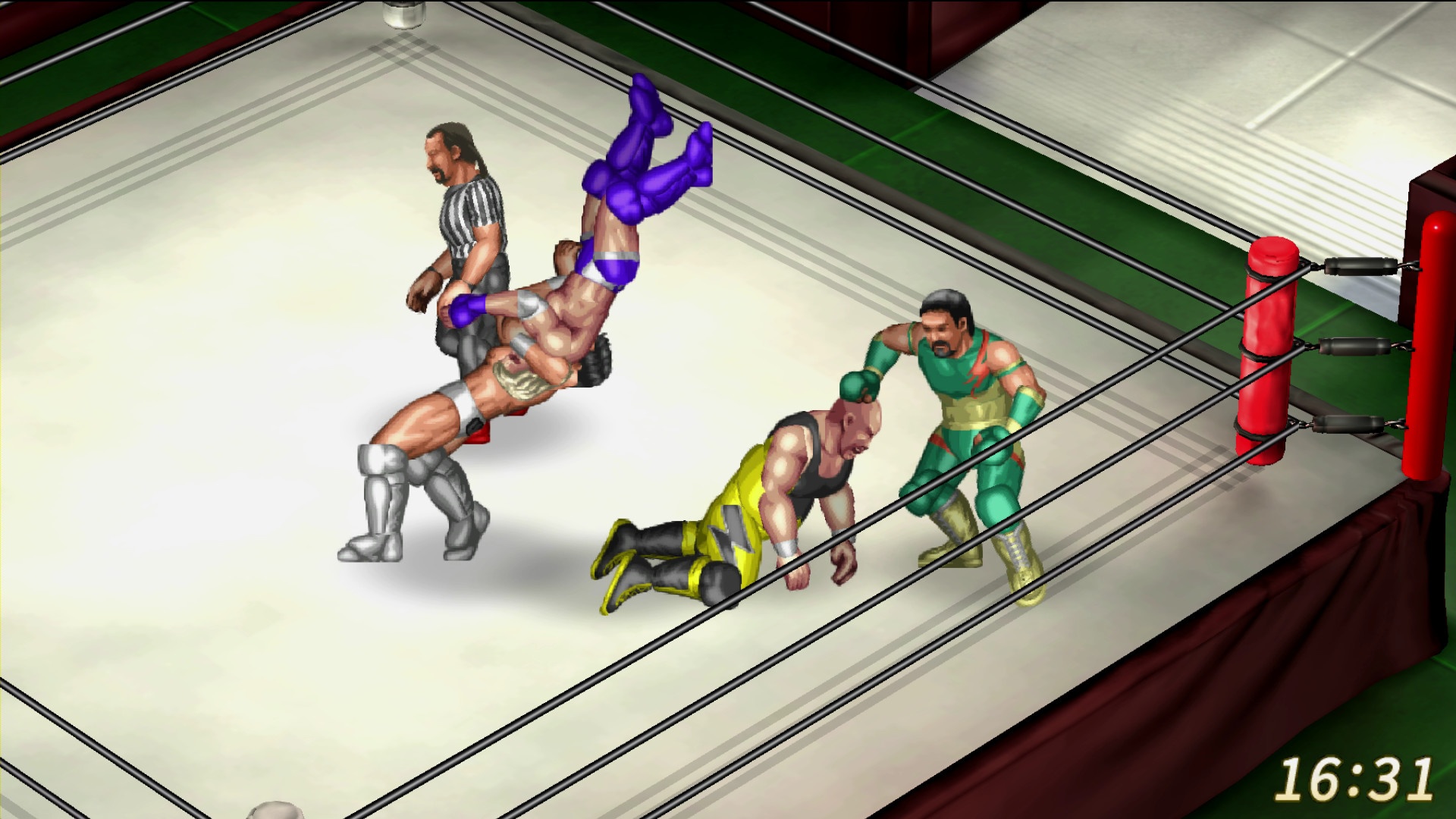 As for the actual in the ring options, well, they’re not far removed from those available in 2007’s Fire Pro Wrestling Returns, but given that they were already rather extensive, it doesn’t prove much of an issue here. Yes, it would have been nice to get something genuinely new, but with an array of standard exhibition matches available alongside the more outlandish examples the series is famous for (landmine matches, SWA rules, s-1 rules, barbed wire and cage matches etc), Fire Pro Wrestling World certainly doesn’t want for content.

Of course, none of this would matter much if the gameplay wasn’t up to scratch, but unlike many (ok, the majority of) wrestling games out there, Fire Pro Wrestling has never put spectacle or excessive content ahead of gameplay quality or depth. Rather than relying largely upon button mashing, Fire Pro Wrestling World’s more considered pace puts an emphasis on timing. It takes some getting used to, and the initially simplistic control scheme soon begins to reveal its huge amount of depth, but for those that stick with it, the finest, most technically nuanced wrestling game, well, ever awaits. That might sound somewhat hyperbolic, but if you give in to Fire Pro Wrestling’s charms, it’ll be very hard to go back to the 2K equivalent.

As great as the game is of course, there are still some issues; the frame rate can be a bit choppy (even if it has been largely cleared up via the most recent patch), and the online (a first for the series), while adequate, is far from definitive. The modes and options available are all fine, but if you are a predominantly online gamer, Fire Pro Wrestling World’s relatively limited suite of options might well prove disappointing. It does run surprisingly smoothly despite the occasional bit of lag invariably having an adverse effect on the timing based gameplay, but what is here often feels like something of an afterthought.

Despite these minor gripes, Fire Pro Wrestling World remains a triumph of old school video game design. It might have an extra layer of HD gloss, but this actually looks and plays a very similar game to 2005’s Fire Pro Wrestling Returns, and while that mind sound like a criticism, I assure you, it is anything but. The 2005 PS2 vintage was already a fantastic game, and with a handful of smart design choices, the brilliantly implemented sharing options and a lick of HD gloss added, Spike Chunsoft have taken the wise, ‘if it ain’t broke don’t fix it’ approach and delivered the kind of Fire Pro Wrestling experience fans have been waiting for over a decade. It might be a tad too old school for some, but for many, the retro-inspired visuals and commitment to gameplay excellence will prove a winning alternative to 2K’s visually outstanding but comparatively clunky WWE offering.

It might be a tad too old school for some, but for many, the retro-inspired visuals and commitment to gameplay excellence will prove a winning alternative to 2K’s visually outstanding but comparatively clunky WWE offering.