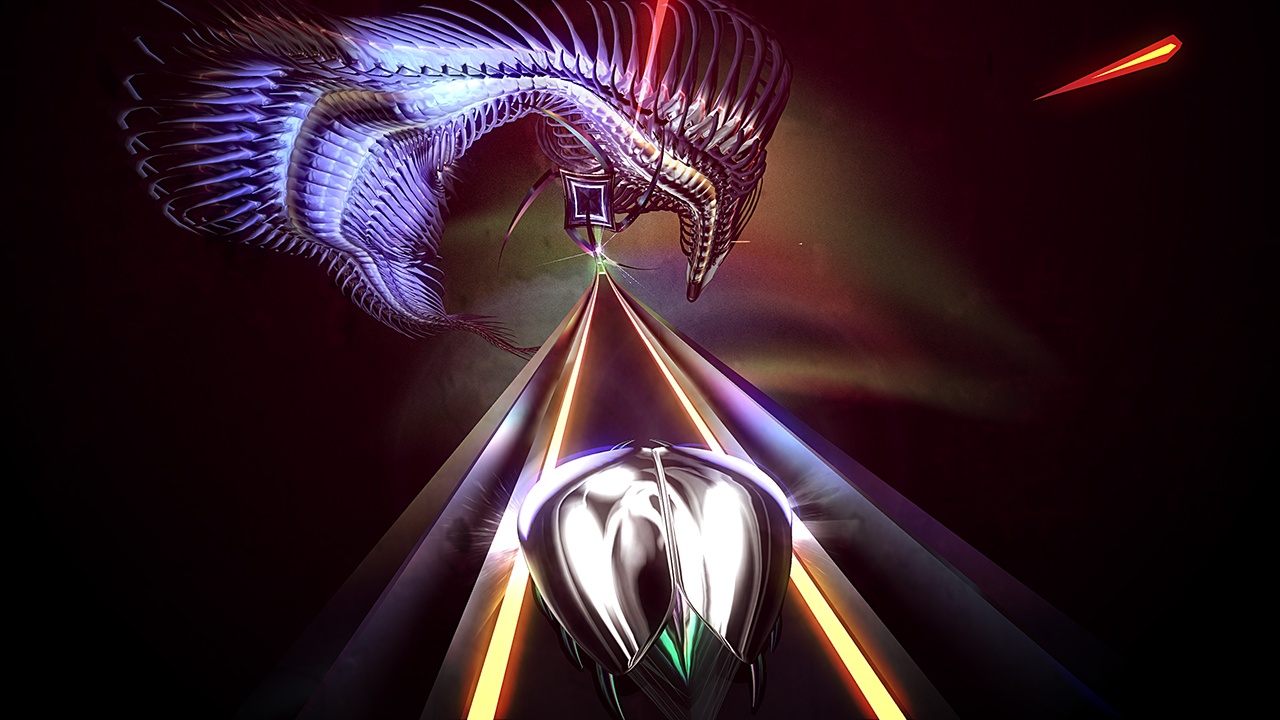 There’s a lot of sensation when it comes to playing rhythm games. Anyone who’s part of music as part of their hobby or career will tell you that there’s mixed emotions that get involved with following and chasing the beat, and you feel some of the same when you really get into a musically-based game. Usually, for lower levels of difficulty and easier games, it’s a poppy, sycophantic sort of vibe, where you feel yourself bopping along with the music like you’re a character in a Looney Tunes short. For higher ones, there’s a furrowed brow, but also a smile, because you change from player to conductor, and it feels like you’re dragging the music along with you, hitting every note perfectly, and you’re almost mad at the game and not yourself when something misses: you were on time, where the hell was the soundtrack? But, for the creation that is Thumper – brought to us by Drool – the emotion is something entirely different. While you will feel totally drawn in and engaged, this is one of the few musical games that brings out the sharp, icy sensation of fear.

Thumper is a bizarre rhythm game that takes place from the visage and perspective of a space beetle, who is rocketing along in the deep, psychedelic reaches of space. The beetle is trying to get to some destination, and the road is not easy, simple or kind. There are nine pathways to follow, each beset by traps, spikes, bleeding red curves and monstrous, terrifying bosses. The only way to survive is to follow the music – the looming, doom-tinged music – and hit, turn and jump perfectly to stay alive. There is almost no room for error. Every movement must be calculated. And survival is your only drive. After all, you are a space beetle: not every game has a proud hero with an epic quest. Sometimes continuing to live is all you need.

As we mentioned, Thumper has a bit of a different approach to the rhythm take of things. Each level is divided into several segments, usually in the mid teens, in which the beetle will see glowing panels that you must press a button as you pass over them. Drool has kindly allowed players to map nearly any button they want to for the action button, but it will default to A, as most of your hands will. The action button is your only friend in this whole game. You must have the action button depressed to make a turn. You must hold down the action button to bust through the barriers. The action button will be mashed into the ground while you flick the left joystick up so you can take to the air and miss crashing into spikes (or worse) by mere seconds. You now know how to play the game. That’s it. Thumper graciously gives you until the second level before charging you with needing to jump into the air, so don’t be fooled by the first world being too “easy.” It’s merely setting the stage for what comes next. 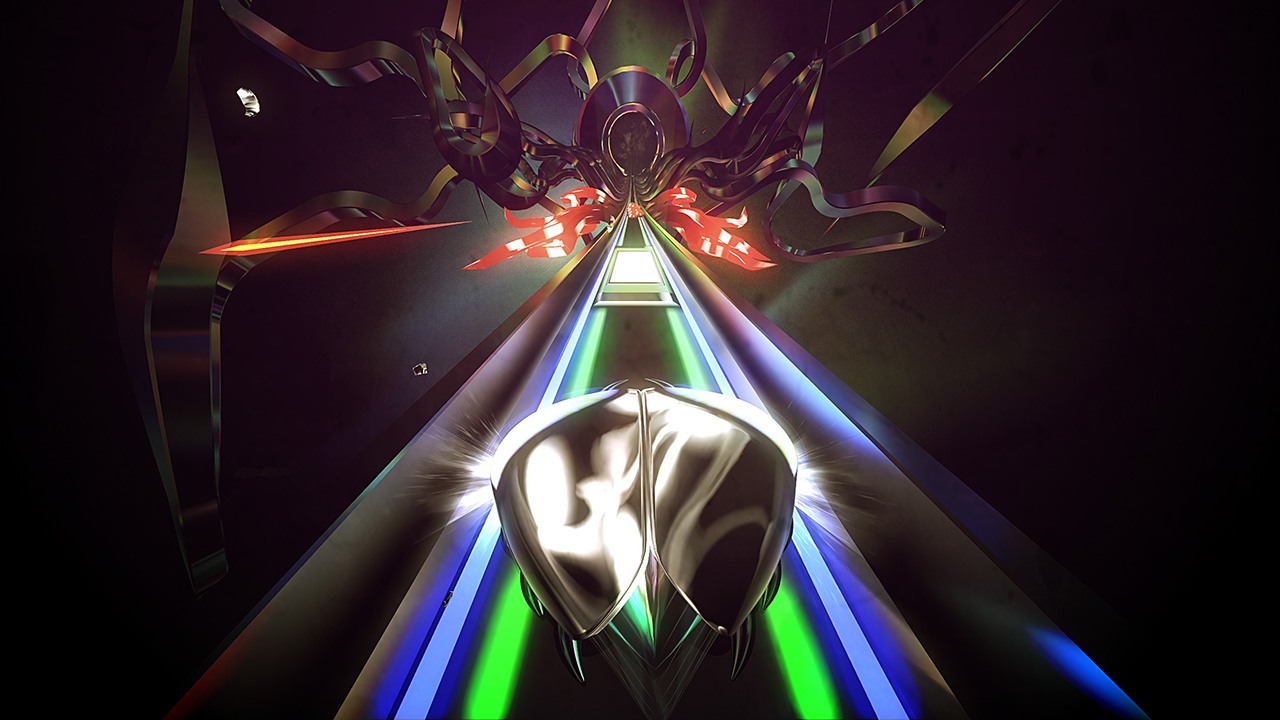 Graphically, Thumper is an unfolding nightmare of the Giger variety, in which darkness is balanced with stabs of unnatural metallic light and flashes. Hues of red and black permeate throughout, with any sort of glow on the horizon only promising something terrible to come. What’s really strange is that I would never classify Thumper as a horror game: the intent is to play, not to scare. And yet I’m certain that several players, especially those that are younger, would find these things digging into their subconscious and creating nightmares in the coming sleepless weeks. Even things like the turns pulsate unnaturally, giving this vulgar sensation to it all. The spikes jut out of the ground in uneven angles, clawing at the sky to try and tear open your carapace. The way the pathways gesticulate and squirm as you move over them – like riding on the back of some mechanical centipede, fusing life with steel – unnerves me just thinking about it. And this is all before you even get to the boss battles.

The boss battles of Thumper are truly a sight to behold. As you are a beetle, your exact size and dimensions are unknown, but my guess is “bigger than average.” The bosses, by comparison, are “Lich God” size, comprised of horrible renderings that change from semi-human (or at least skull-like) to gaping maws of hell to every other sort of bad dream you can’t shake yourself from. The bosses demand one thing and one thing only: perfection. You can only beat them by hitting every glowing panel that appears while also dodging and moving through the rest of the level. Miss a single panel and start the sequence over. Hit every one and send a shot of energy down the rails to damage them, and several hits will save you. Watch the bosses writhe in pain and agony to feel their own darkness rebounded back upon them. If you take a hit, you’ll be laid bare, a space beetle no more, just a mere insect. Complete the next sequences to the absolute and you may be rewarded with a chance to put your shell back on. But remember: it will only save you once. 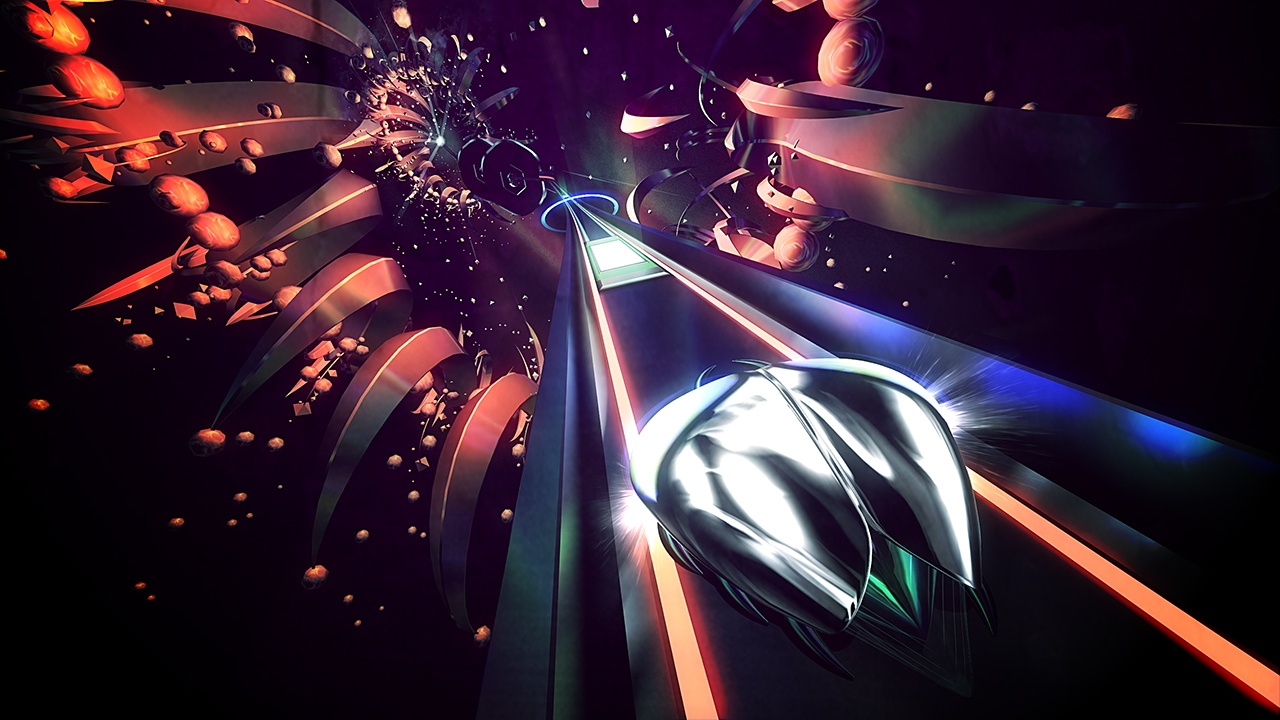 The cornerstone of Thumper is the music, and the soundtrack creates such an interesting quandary that only those who’ve played it may agree with. The music of Thumper gives me the impression of an apocalyptic future in which society has fallen, bits of technology remain, and the factions of the world have regressed and broken back into tribes. One tribe is fixated, almost zealous, with the idea of death, and worship the void as their new God. But Death is not a gift given freely: it is a prize you must fight to earn. As the time for the challenge approaches, the tribe begins to beat out a sound, a din of foreboding and pessimism, of coming doom that you both must resist and welcome. That is the soundtrack of Thumper. The music pulses and stomps down your ear canals, bringing screaming messages of failure and your demise, and you have no choice but to listen closely so that you don’t make a mistake. It’s no wonder that Thumper works so well as a VR game: the whole thing is an immersive experience, and one of the few soundtracks that can fill me with dread. It’s the perfect music for this game, and one soundtrack that I will laud and also staunchly never listen to unless I’m playing. To hell with putting that on my iPhone, I gotta get to work in one piece and without having a full existential crisis.

The overall gameplay of Thumper is so richly, wonderfully punishing. Failure is going to happen, and you just have to live with it. Every stage of every world gives you a rating at the end, letting you know what you did right (not what you missed) and grading you at the finale. High scores are uploaded online when the final boss is defeated for each world, and you hope and pray for an S. If you die, you start that stage over. If you pass that stage, you barely have a second to breathe before the next one starts. That’s the real power of Thumper: never being able to simply rest. Great, you got no misses, isn’t he last stage? Do it again. With new stuff. And it’s coming faster. It’s getting more complicated. Can you make the four turns in a row and then jump into the air? You released the action button too soon and missed that arc, so long S rank! You can do the turns, but are they perfect turns? The HD rumble lets you know, in each Joycon, when you get it right and they sit silent, judging you, when you miss. They’re not mad, they’re just disappointed. And you feel that in your soul.

Thumper is obviously not for everyone. If you’re into rhythm games for relaxing, or like a game that makes you feel good about yourself, get out of here and don’t stop running until the darkness is gone from the horizon. But there is something genuinely, unapologetically GOOD about getting into Thumper. The atmosphere, the driving music, the sensation of watching your beetle slide along the rail in perfect balance, hitting those panels and getting that S at the end…it’s even sweeter having only a second to celebrate your victory before you need to prove yourself again. Thumper is a difficult game to play on the go simply because you don’t want to miss a stop, walk into something or have a full nervous breakdown in a crowded area away from home. But there’s a good reason that Drool received so many accolades for this game. Come enjoy the ride. There’s always room for one more.

Thumper is the only rhythm game that gets you more stressed the longer you play because you know it’s only getting harder. And it’s glorious.