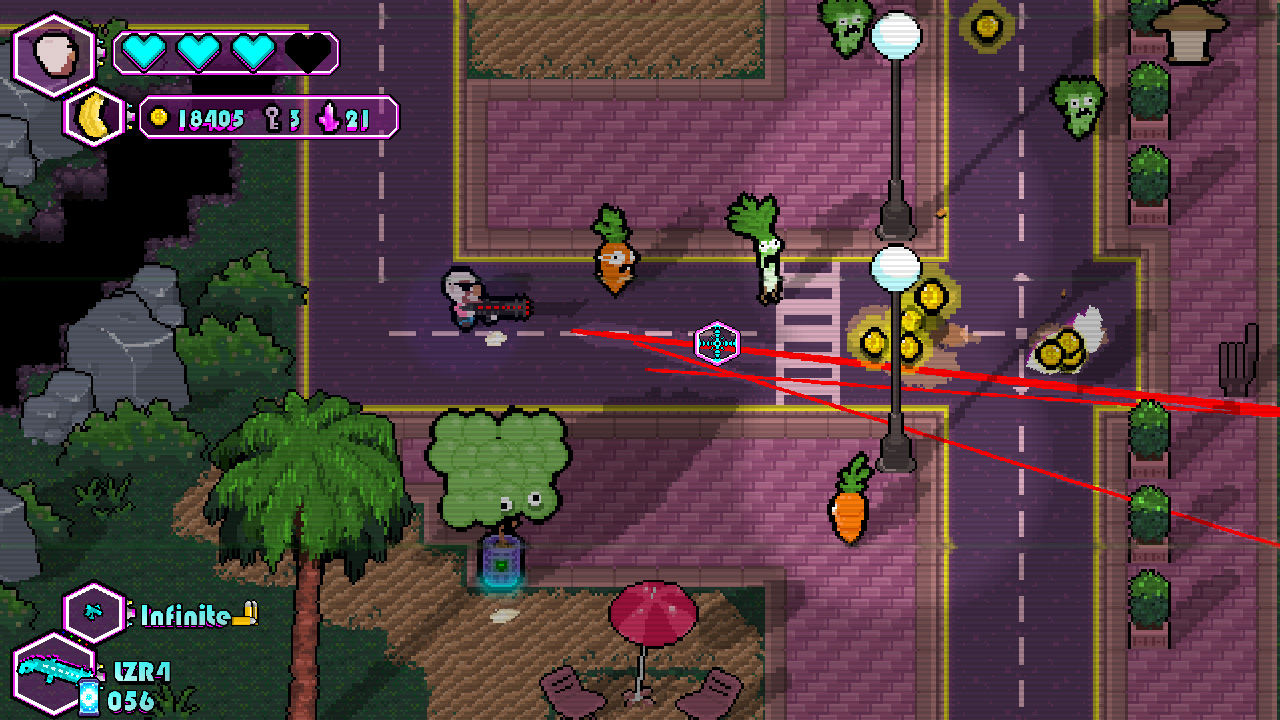 I’m always on the fence about the continuation of games, movies and music injecting 80s culture into a medium in order to drum up interest based on nostalgia and genuine enjoyment of the time period. On the one hand, it has made for some seriously interesting art, and things like Kung Fury, OutRun and a majority of my playlist (synthwave and such) wouldn’t be even remotely as great if not for a heavy dose of neon and oldschool. On the other hand, it does cloud certain factors, making them blurry and rather bland compared to what they could be. In this case, I’m talking about the latest game to stagger across my desk: The Walking Vegetables – Radical Edition. While far from a bad game – seriously far from it – the heavy 80s saturation could easily be a turnoff for some.

Firstly, you start right off with not one, but two 80s throwback references before you even get to control the game. There are aliens landing all over the city that’re turning vegetables into zombies, and the police chief knows there’s “something strange in the neighborhood” and wants to know if you’re “a bad enough dude or dudette” to take care of the problem. Oh boy. Naturally, as some guy with no name or identity whatsoever who kind of looks like Bryan Cranston towards the end of Breaking Bad, you decide to jump in and take the case. The aliens are really pulling out all the stops, making bigger and crazier veggie and fruit zombies that all culminate in a handful of randomly selected bosses each stage. But don’t worry. You’ve got your baton. You’ve got your pistol. And you’ve got a hot cup of coffee. Let’s do this.

The Walking Vegetables is a twin stick shooter with some procedurally generated elements and a fair amount of variety in terms of items and map layout. Each chapter of the campaign (dubbed No Peas on Earth) will have several “rooms” to explore on a map layout, including exits in arbitrary directions, different kinds of buildings per room, and, of course, tons of zombies to shoot at. Clearing the room will allow you to move onto the next area, and clearing a building (if it has zombies inside) will net you a treasure chest with a different item or items inside. Sometimes it’s a healthkit, sometimes it’s just a simple chest with a new pistol, sometimes it’s a locked chest with a goddamn plasma rifle inside. There’s a ton of weapons to find in the course of the game, and you’ll carry MOST of what you find with two caveats: your melee weapon and grenade. You can only carry one of those, so decide if you want to have the Molotov cocktail or the literal grenade that you might get lucky and find. Also, when a store crops up, you can use the absurd number of coins that the enemies drop in order to control your destiny and purchase new stuff as well. Just pray you have a key on you: almost every store I saw was locked up tight, probably to keep out zombies. 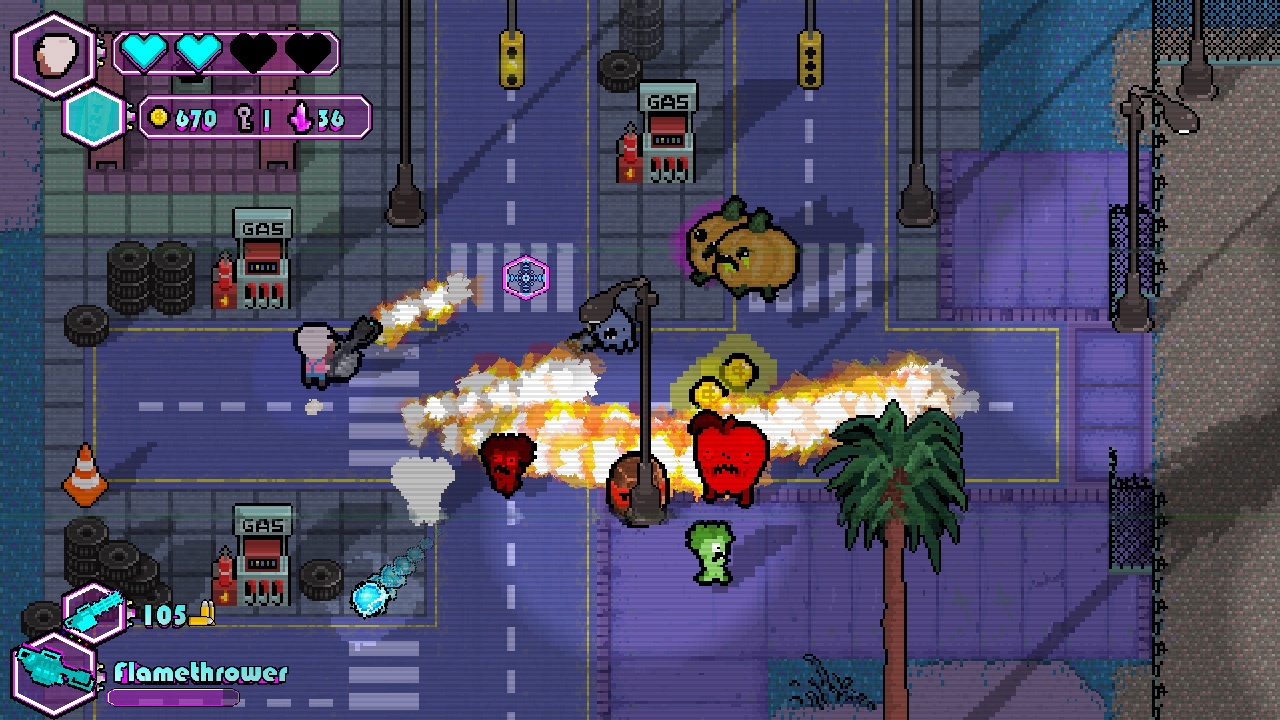 The Walking Vegetables does a lot of things right, and I mean a lot. Firstly, the game quickly becomes manageable after an initial shock of how large it appears. When you first drop into the game, you’re not given a ton of information, so you get it into your head each level is this labyrinthine maze of buildings, areas and monsters that you need to clear. That simply isn’t true: hell, I did one run without opening a single building. If you are lucky, you can find the spot where the alien decides to engage you relatively quickly, and every boss is beatable with your stock equipment and some fast fingers. Other guns do not have infinite ammo, so you can’t just luck into an AK-47 or a Tommy Gun and hold down the trigger till the game is over. But, if you use up all your bullets (like I did in my fight against a giant broccoli), you can swap back to the pistol and wear your ZR button out like the devs intended. Heck, once you really get into the groove of the game, you can play a full campaign, start to finish, in about 45 minutes, give or take And beating the game once, like all good roguelike twin sticks, is where the real fun begins.

You see, The Walking Vegetables also has a large assortment of modifiers that you can “earn” throughout the game. Beating a certain boss unlocks the ability to walk through the acidic damage left by citrus zombies without taking damage. Dying so many times graciously lends you a bonus health mark, extending from four hearts to five. If you’re insane enough to beat the game using only your melee weapon or without purposely switching your main gun once, you can unlock two wildly powerful and crazy abilities to use. The game does NOT allow you to stack everything at once: you gotta choose four of the close to twenty unlockable skills. That’s a bit of a shame, just because I really enjoy going full godmode in twinsticks, but alright. Another small caveat is that you need to unlock the slots to equip more skills: that is, you need to unlock about four before you can equip two, and you need to unlock close to twenty to use all four. Still, the game is totally beatable if you don’t use them, so it’s just a nice fluff overall.

Additionally, the music and aesthetic of The Walking Vegetables is pretty great, and you aren’t totally hit over the head with the vibe after the initial intro and the splash screen. You travel between worlds in a Delorean (the most 80s of vehicles) and there’s a bit of a VHS glitch to make it have a better effect, but nothing is as heavy-handed as most of the material in Ready Player One. The neon wash and everpresent palm trees lends itself more to a Vice City era of “retro” instead of anything overtly vaporwave, and that fits in with the gameplay style and message. I actually wish they had gone more in on the music: as I sit here now, I remember synthesizers and the standard presentation (the pause music is some of my favorites), but there wasn’t a track or stage that grabbed my attention fully. 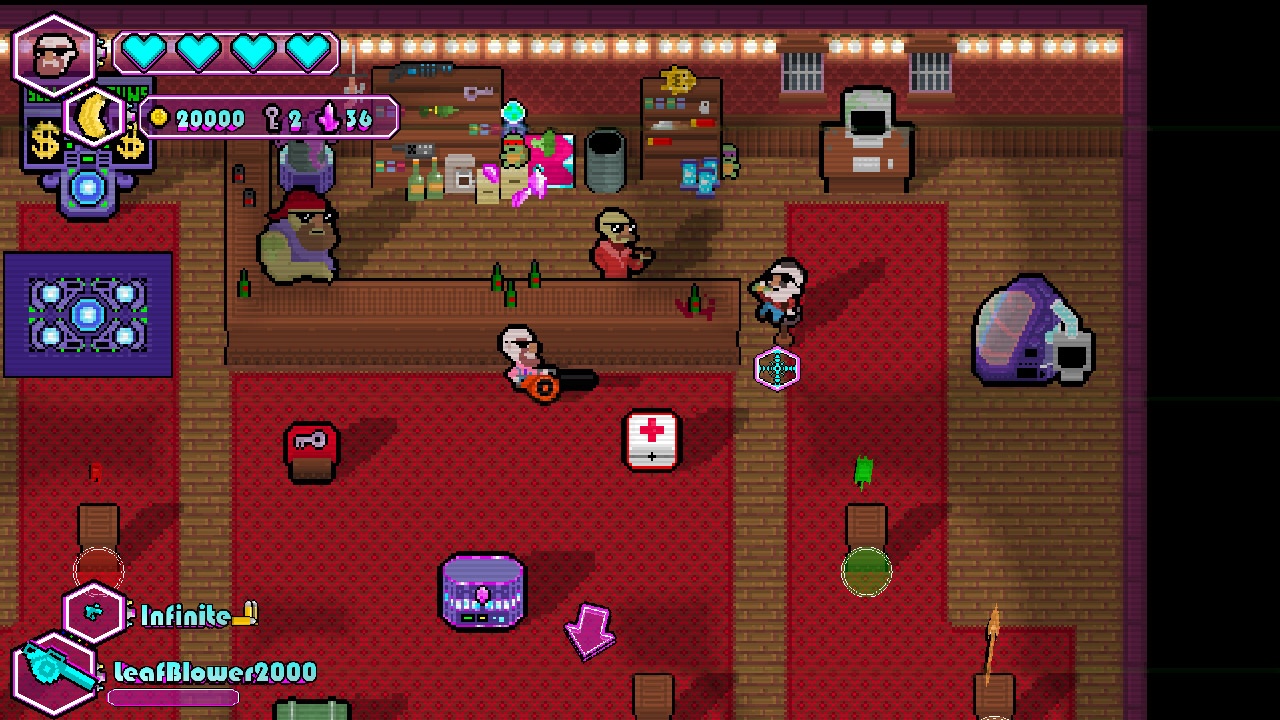 Now, on the negative side of things, the game does have moments of being broken in a fun but slightly boring way. Firstly: sniper rifle. Holy crap, if you’ve got any sort of aim skill naturally, the game just opens up to you. Max of 2-3 hits for the larger enemies, one for the smaller, and it penetrates through a near infinite number of veggies. You can take potshots from the other side of the stage thanks to the minimap and clean house without seeing a single plant. In the same vein, the shuriken melee weapon is a ranged melee weapon with infinite rethrows. It’s more powerful than the pistol with slightly slower trajectory, and it never runs out. If you’re trying to finish any unlock that involves “no guns” or “no changing weapons,” this one pickup completely alters the difficulty of this task. You don’t even need to finish the campaign to figure out that you can stomp with any number of the guns, since the game has real softball moments.

What I mean is that The Walking Vegetables WANTS you to win. Still Running, the developers, want so bad for you to win the campaign and feel radical that they’ll go to any lengths to make it possible. The drops from the scenery are positively insane. I went into a bossfight with three hearts and finished the fight with four. Everything and it’s momma drops ammunition, keys and hearts like there’s a surplus out every orifice. If you’re ever concerned about running out of anything, don’t be. As long as there is literally something left to destroy on the screen, the likelihood is that you’ll get the bullets or heal that you need. That’s what makes the survival mode that unlocks a bit more fun: it cuts down on the number of things you can break and find solutions in. Still, even the enemies are guilty of being pinata packs that run towards you.

The best thing I can say about The Walking Vegetables is that it’s fun and campy in a positive way. It never takes itself too seriously, isn’t terribly difficult but definitely curves as you head towards the last stage of the campaign. There’s a variety of weapons and power ups, a good number of generated layouts, and several cool instances of the monsters being interesting, like the giant tree (bush?) that spawns a pack of little, aggressive beans when you shoot it. When I die, it’s either because I made a dumb mistake, I cornered myself with no ammo, or I was trying to get the “die ten times” achievement so I could unlock another skill. If you like twinstick shooters, you’ll seriously have fun here. Just remember to adjust the rumble in the settings: it’s at 100% by default and numbed my damn hands.

My only regret was not having a second person available for co-op veggie blasting, because this game was FUN.