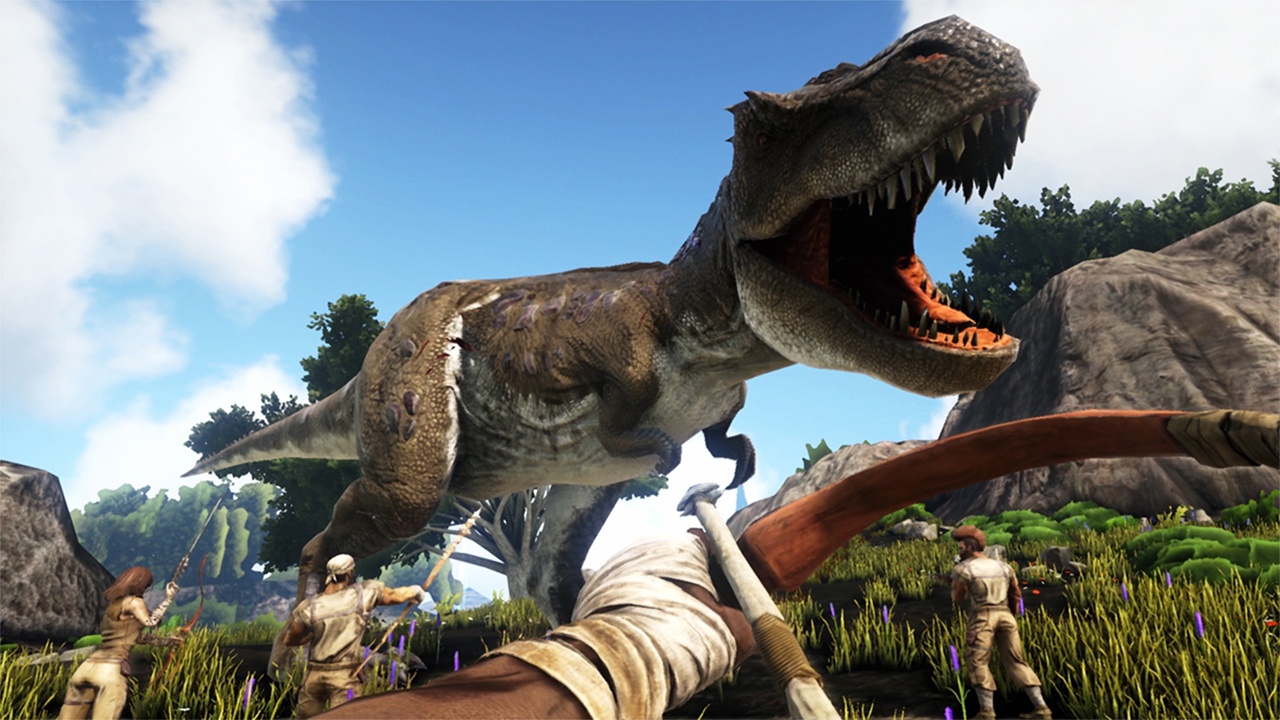 It can’t be denied that we’ve had some great ports on the Nintendo Switch over the last eighteen months or so. Titles such as Skyrim, Doom and Wolfenstein have wowed us with their technical brilliance; although a few sacrifices have had to me made along the way, but they’re generally acceptable. We’ve also had near-perfect ports too, with Fortnite and Warframe being two particular stand-out titles. You have to admit that having the ability to play these games in a portable fashion is a novel one and undoubtedly one of the draws that has made the Switch such a success. However, it’s only inevitable that a port will come along one day that is maybe too ambitious or a port too far and, unfortunately, that time has come with the release of Ark: Survival Evolved.

Developed by Studio Wildcard, this survival MMORPG is the full experience that has previously been released on PC and other consoles; a feat in itself that is truly remarkable. However, it also comes with a series of technical issues that, although not really game breaking, do produce a more lacklustre experience; but if you can see past these issues, then you do end up with an expansive title that is unique upon Nintendo’s machine. It’s certainly an ambitious title to bring to the Switch and unfortunately it shows with frame-rate issues, textural pop-ups, ugly-looking landscapes and a scenery that looks decidedly smudgy.

However, it’s not all bad though. Performance is slightly better if playing with the Switch docked. Handheld really doesn’t cut it, at least in an aesthetical presentation, but for pure gameplay, its mechanics have remained intact. It can feel pretty close to being unplayable in handheld mode, mainly due to its ugliness, but if you stick with it, you soon get used to it as the gameplay begins to shine through. The main premise of the game is one of pure survival. You start out washed upon the shores of a remote island with nothing but a loin cloth to keep your dignity intact. With such bare necessities, you’re certain to die, a lot. Around every corner, danger lurks; mainly in the form of over eighty species of dinosaur, from the harmless dodo to monstrous crocodiles and the terror of the T-Rex. 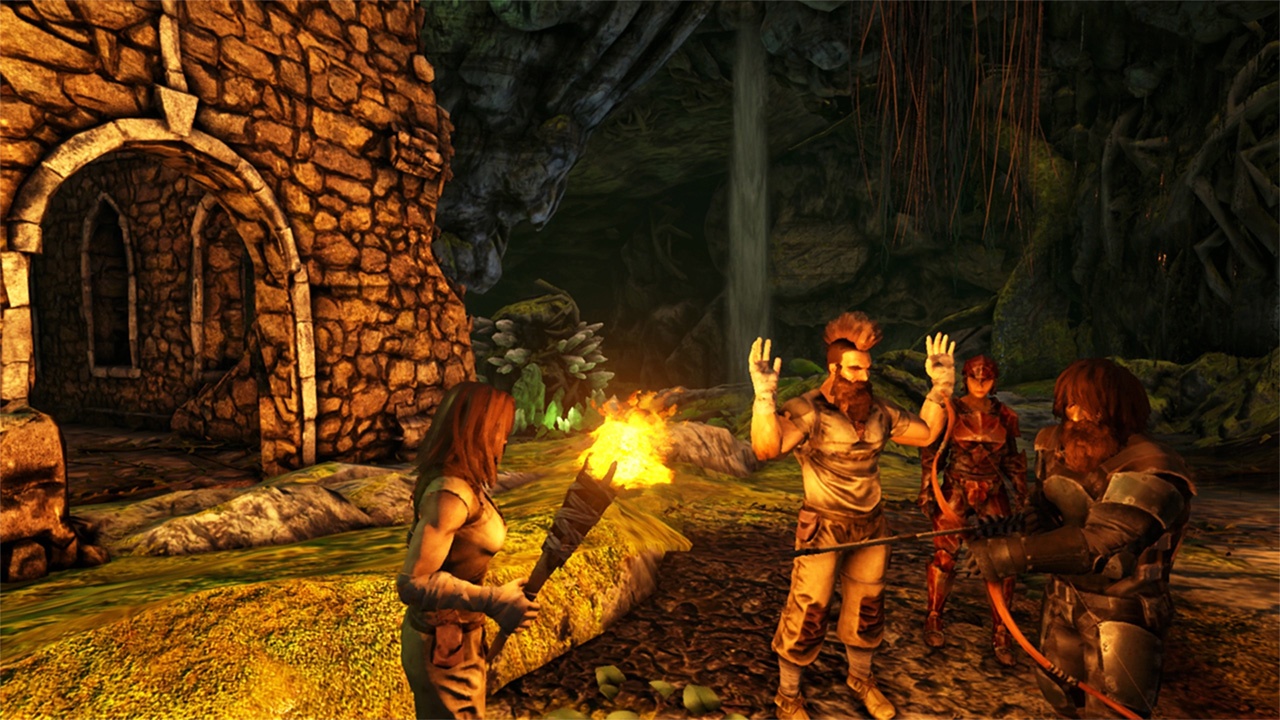 The key to survival comes down to your ability to make the most of the island’s resources and craft items. It can take a few hours to get to grips with the whole mechanic here, but with constant gathering of materials and food, you level your character up which in turn, unlocks various blueprints from which you can craft. You start with the basics: fires, clothing and pick-axes but can soon learn how to build dwellings and guns. There’s an absolutely huge amount of depth here and it’s in this respect that you get the complete Ark experience.

There’s a huge amount of satisfaction from watching your character develop and grow, as well as creating bigger and more useful items to help with your survival. As you delve deeper into the game, you can even learn to train the prehistoric wildlife, making them your pets and even modifying them to become your ride. Each of your built items can also be developed and upgraded, making them stronger and more durable to the elements of the island. It takes a huge amount of trial-and-error to fine-tune your abilities and gather materials and blueprints. However, should you die, you do keep your progress, at least in terms of what you have learnt, although you will need to start from scratch with gathering resources. 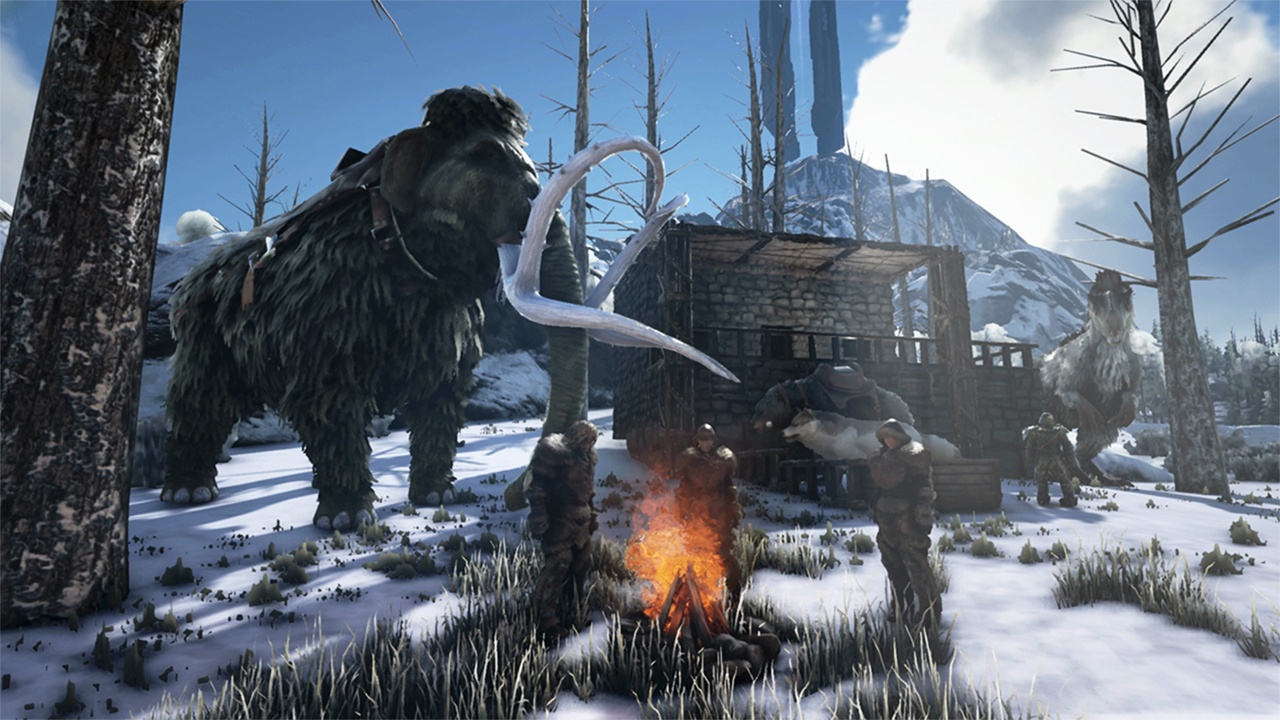 The game can be played in a solo setting, which offers a good place to start your journey should you be new to the game. However, the real beauty of this title lies within its sixty-four player servers where you can interact with other players, form tribes and learn some masteries that you may have not realised yet or are struggling to work out. It almost creates a whole living world, as even when you are not playing the game, your character remains asleep. However, in this state, you can be vulnerable to other players who may want to steal your loot. It adds further tension to the game, for if you’re not looking out for the dinosaurs, then you need to be wary of fellow humans. There’s a huge amount of unpredictability to the game. If you’re not defecating on the beach, then you may be going through the belongings of a fallen comrade, or the next minute, being involved in a mass battle as a Tyrannosaurus-Rex comes crashing into your tribe’s village.

In terms of the gameplay here, it’s simply staggering. There’s so much depth and so many things to learn, that it would be impossible to list them all here. If you’re looking for a complete Ark experience, you’ll certainly find it here. What you won’t find though, is the best looking version of the game or a particularly breath-taking view; although you can find some instances that produce an awe-inspiring moment. Your first dinosaur encounter has a particular Jurassic Park feel to it; especially when you first come across a T-Rex. Learning to craft and survive is also particularly rewarding, especially as you develop further and begin to set up a fully-functioning home. However, the servers that are populated with other player provides a completely different experience, especially where the Switch is concerned, with a community that is largely friendly and helpful.

Overall, Ark: Survival Evolved is a game that is maybe a port too far, but only as far as graphical presentation goes. In terms of gameplay, what we have here is an unbroken experience that offers the complete package and is a rewarding game. With luck, all of its imperfections can be ironed out with continued support and regular patches. As it currently stands though, it does raise question marks over its current pricing strategy. It’s a difficult game to give a rating, because it’s actually a good game but in terms of technicality, it simply sucks. Like I said beforehand, if you can see past its imperfections, then you have a sublime title that you can simply lose yourself in for hours upon end. However, if graphics are important to you, then I would take a couple of marks off of this score below and it might be worth holding off to see if it improves in future, or at least grab it when it goes on sale.

An ambitious title that is good in gameplay, but also one that is marred by technical issues and graphical imperfections.