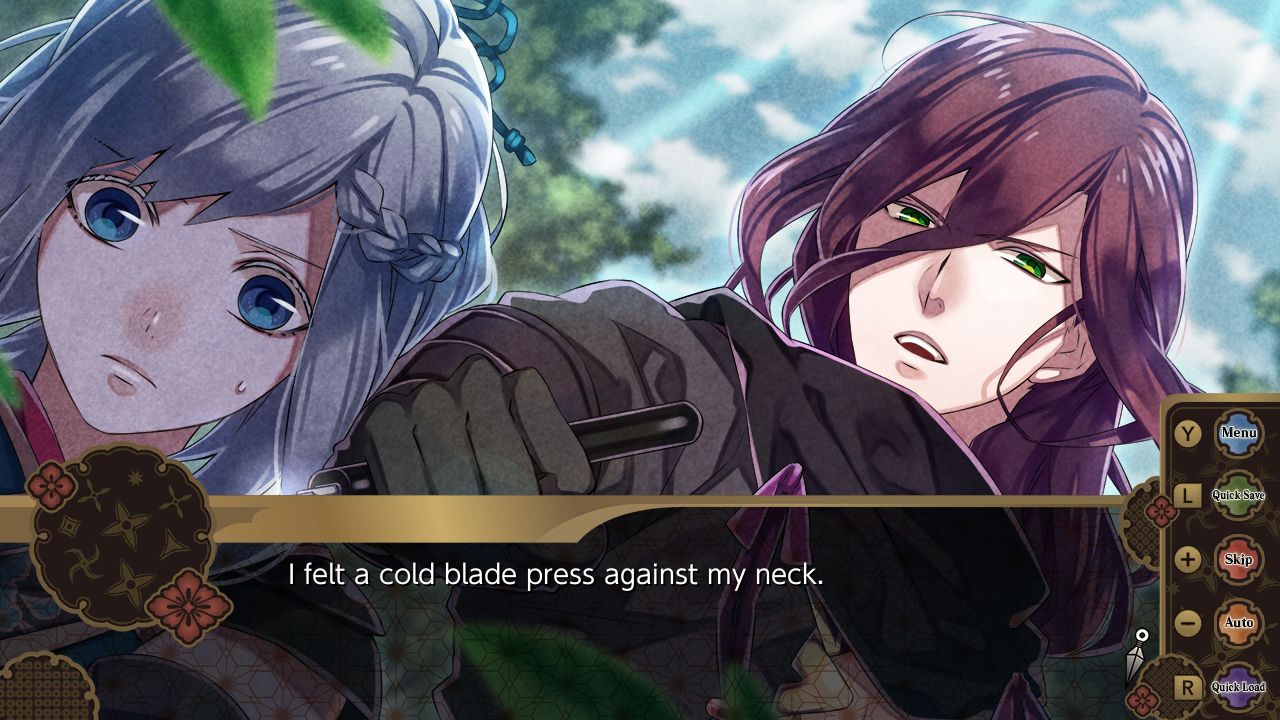 One of the biggest issues with otome games, to me, is how singularly one-dimensional they often feel. I understand that they’re a reflexive counterbalance to the harem dating sim games, and they each have their niches that make the game sell. While harem titles have several impossibly busty women tripping over themselves to appease a protagonist with the personality of a dish rag, otome usually have several impossibly beautiful men all doting on a shy heroine who has some kind of unique trait to her. The problem is that, as a writer not interested in dating a pretty boy, the games tend to fall flat if there isn’t something else going on. When I wrote about sexy Harry Potter a while back, I was bored to tears by the piddling plot, terrible twists and atrocious grammar. So believe me when I say that Nightshade, from LANTERN ROOMS via D3 Publishing, is probably one of the better otome games I’ve played, and that is saying a ton.

As an historical visual novel, Nightshade takes place during the dawn of the Edo period, putting this at somewhere around the early 1600s. You’re Enju Ueno (or whatever you change your name to), daughter of Kandou Ueno, and you’ve been training to be a goddamn shinobi your whole life. You’ve been studying hard under the tutelage of your older brother, Chojiro, and watched carefully by your bodyguard/adopted brother, Gekkamaru. When you get assigned your very first mission by your father, you’re elated and excited to head out, see the world and maybe kill some rival ninjas along the way. You’re also excited because the end of this first mission will mean the return of Kuroyuki, another adopted brother whom you haven’t seen for eight years. As the story unfolds, you realize there are great forces at work: after all, your very life is the symbol of peace between two of the biggest clans in all of Japan. If you were to be dealt with, it could lead to an all-out war. However, if you were to show yourself to be a leader, and a commander – and perhaps find a lover in the process – you could usher in this new era with a calm future on the horizon. 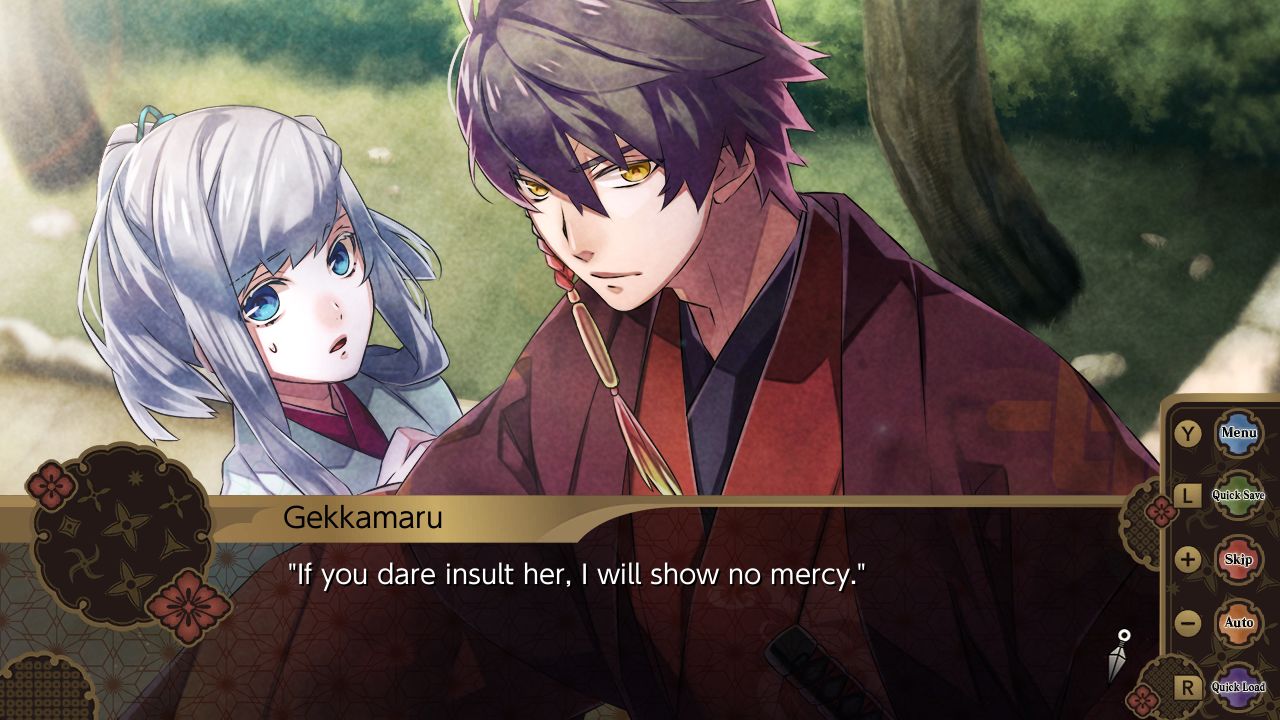 You may see the strong age rating against Nightshade from the very beginning, and I have to warn everyone that it has NOTHING to do with sex. Nightshade, for the players out there looking for some serious romantic action, you’re going to be severely disappointed. There’s plenty of smoldering looks, several kabe-don scenes (both horizontal and vertical), and some off camera smooches to signify a good ending or at least a good beginning. No, that rating is because of some straight up violence throughout. Tons of people get murdered, assassinated, executed, and generally wounded. The protagonist herself takes a lot of damage depending on the route you take, and quite a few of the bad endings result in her death in multiple forms. If you have any sort of triggers with suicide or euthanasia, regardless of the romantic subtext, please be warned. Oh, and if you hate seeing blood and death, same warning applies. Seriously, I was a little shocked. Not enough to stop playing, but damn.

Naturally, this violence is contextual, and the story and character development of Nightshade moves along at a brisk, well-done pace. It takes only a short amount of time for Enju to start to see the scope of the empire and her impact within Feudal Japan, and this is where LANTERN ROOMS and Nightshade really shine apart from other otome games. Far too often, you see any of these titles – be they for big breasted idols or sultry, muscular men – use the storyline as a paper thin support to get you into the hearts and pants of the other characters on-screen. In comparison, Nightshade has a fascinating amount of detail as far as the room decor, the environmental atmosphere, and the various clans and factions that were in play in the 1600s. Remember, this is roughly around the end of the Nobunaga era, which has generated so many video games in the past, and it really picks up on things on a more microcosmic level. Every choice that you make within, even though it’s ultimately setting you down one path or another with a man, also has ripples throughout the empire that’s being constructed, and you feel that heavily on your first play through. My first trip down the road with Nightshade brought me into the arms and lips of a particularly handsome man named Goemon, who shows up early on and is both endearing on the eyes and on the ears. It took a fantastic amount of time to get there, but the journey was worthwhile.

As far as the characters, you’ll see that the Nightshade page on Nintendo and on Steam both heavily advertise the voice talent they’ve gotten for the game, and I have to say it’s an exquisitely casted setup. Everyone really delivers a broad, full range of emotions in their presentations, and so I desperately urge you to make sure the speakers are on. The reads of different dialogue, from the chiding of your brother to deep confessions from an unlikely companion, resonate so much more strongly when heard. When you get a chance to see what happens between the different endings, both “good” and “bad,” you admire the different inflections and situations that the actors and actresses are thrust into. This also is aided by a solid, clean and error-free translation and minor localization from the development team, which I seriously appreciate. Nothing takes you out of the moment and ruins an experience like having broken, borderline hilarious sentences in the middle of a dramatic reveal. 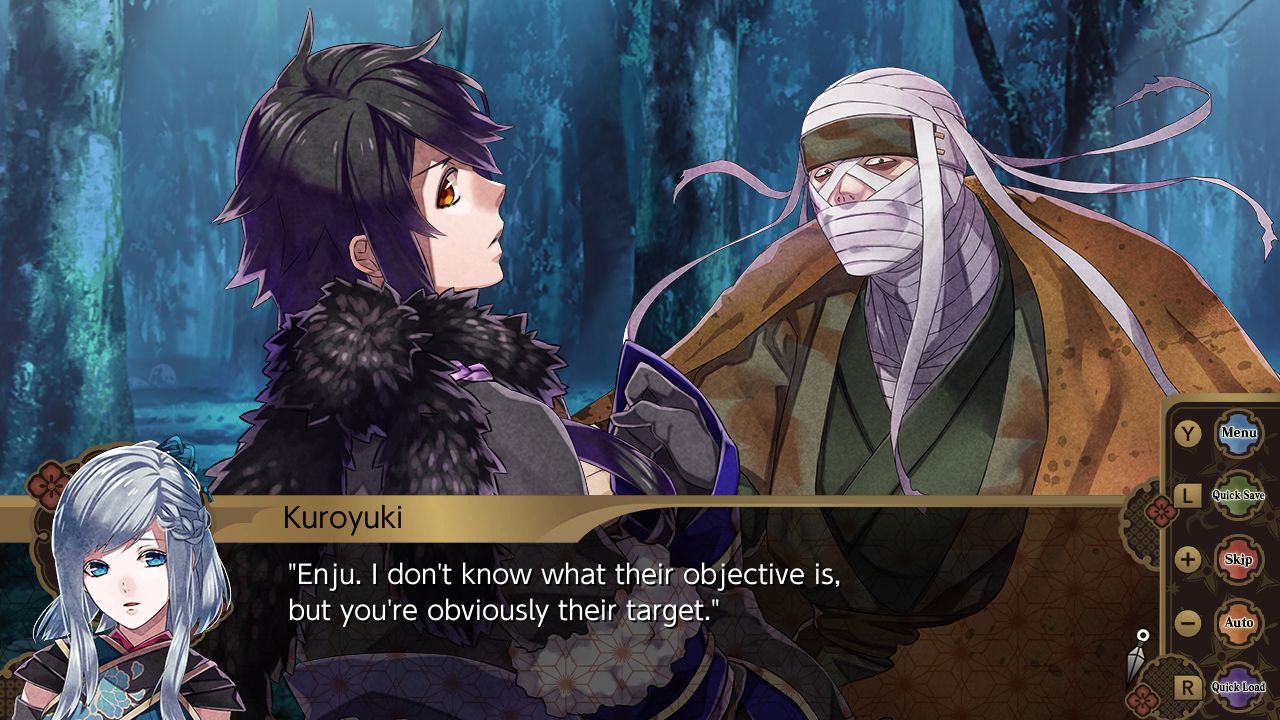 Now, this isn’t a small time investment. I’ve previously played such titles and been able to reach an ending within a few hours, usually four or five at the most. You’ll easily, unapologetically hit double digits to find your first finale within Nightshade, so the price tag (which some uninitiated may balk at) absolutely reflects the amount of content within. Not only are there multiple endings for the many, many characters you might end up with, there’s also additional content in the extras setting that can be accessed at any time. Extras are where you can also see different clips, stills and hear some of the music that you encounter throughout the game, but give the extra memories section a chance if you really become enamored with one character or another. These show an extra dimension and facet to everyone, and I particularly liked Gekkamaru’s reflection to help add a bit more to the gruff-yet-soft man who shadows you throughout the game. This is meant to be a full package, and a title that can keep you hooked and engaged for weeks, not days, and definitely more if you choose to invest.

Between the beautiful artwork, the appropriately old-meets-new soundtrack and the dynamic, full storyline, Nightshade is probably the best otome on the Switch, if not one of the better ones in the gaming world. Usually I find bad endings to be purposely off-putting and bleak, like I’m being punished for not making the right decisions and following my heart the way the game expected me to. Not so with Nightshade. The bad endings have as much of a resonance as the good endings, and, in the case of Chojiro’s ending, even moreso, having a tragically poetic note to bring the curtain down with. If you’re even remotely interested in this sort of game, I would highly, strongly recommend playing Nightshade. Having it on the go with the Switch means that the long play time can be digested in bites and clips instead of gluing yourself to the PC for hours on end. Make sure you save often, though: you’ll never be sure if you want to go back and try another choice, because even the earliest decision you make has consequences at the bitter, beautiful end.

Nothing brings history to life like showing cutthroat violence admit blossoming romance in one of the most artistic of Japan’s eras.