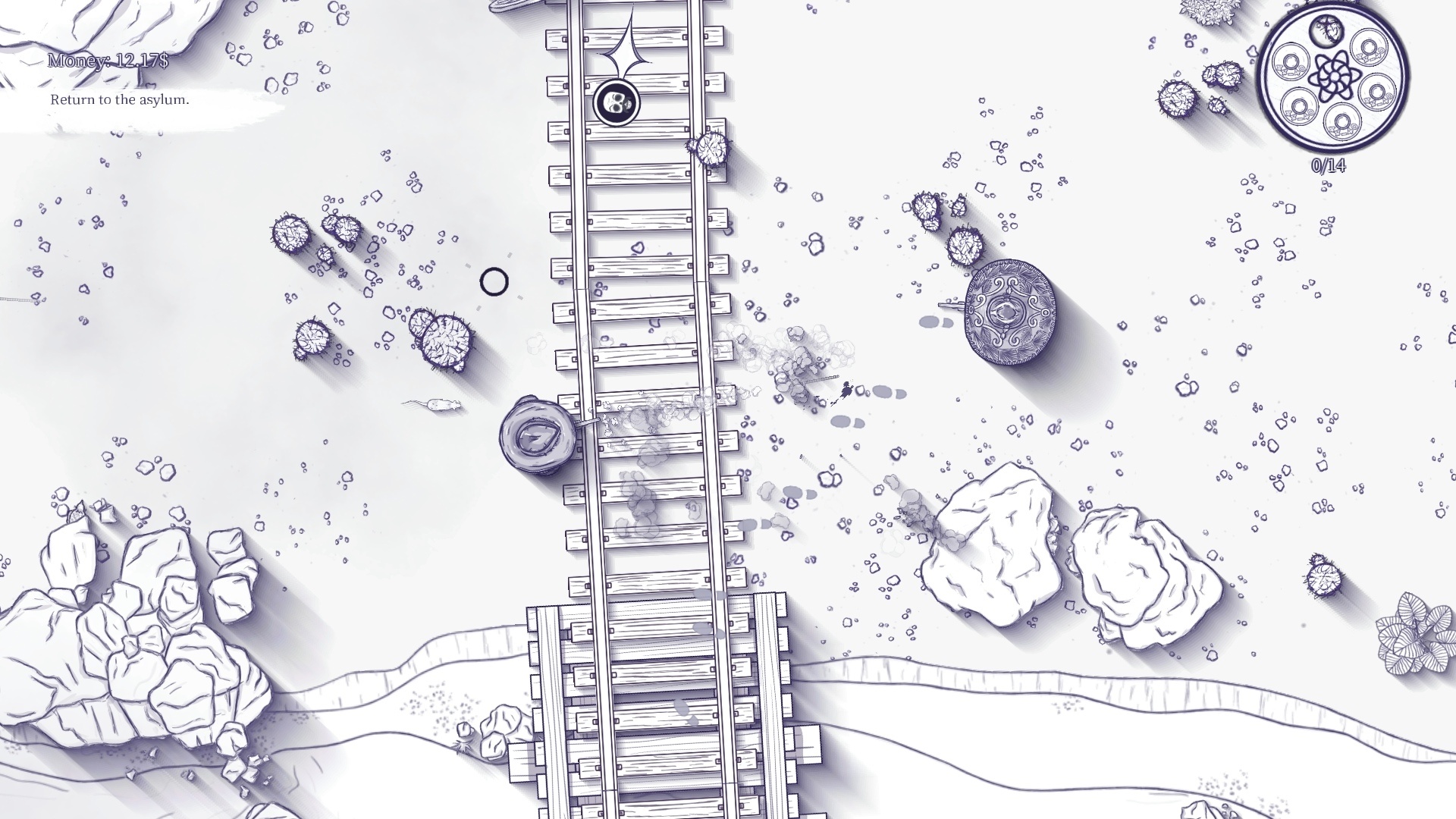 While Red Dead will always remain the pinnacle of games set in the Wild West, it’s such a rich, untapped resource that any title that delves into the murky world of outlaws and cowboys deserves at least a modicum of respect. To be fair to 12 is Better than 6, while it’s not as bad as a case of dysentery, it’s not the rootin’ tootin’ adventure you’ll be hoping for, especially based on the wickedly gorgeous art-style.

And let’s talk about that art. It’s absolutely stunning – the hand drawn environments and monochrome backdrops are sublime, with the only thing breaking away from the greyscale is the blood splattering of your dead enemies. It’s an incredibly fitting style, especially for a game set in one of histories most brutal eras, and frankly, it’s my favourite thing about 12 is Better than 6.

But no matter how gorgeous it is, the rest of the package lacks the same finesse. The wafer thin plot never really gets a chance to get going, and only serves to give the game reason to take you elsewhere across the world map. Not that it really matters, it might be a looker but environments are repetitive and don’t stray too far from a familiar path, using the same buildings, character designs and similar layouts across every area. 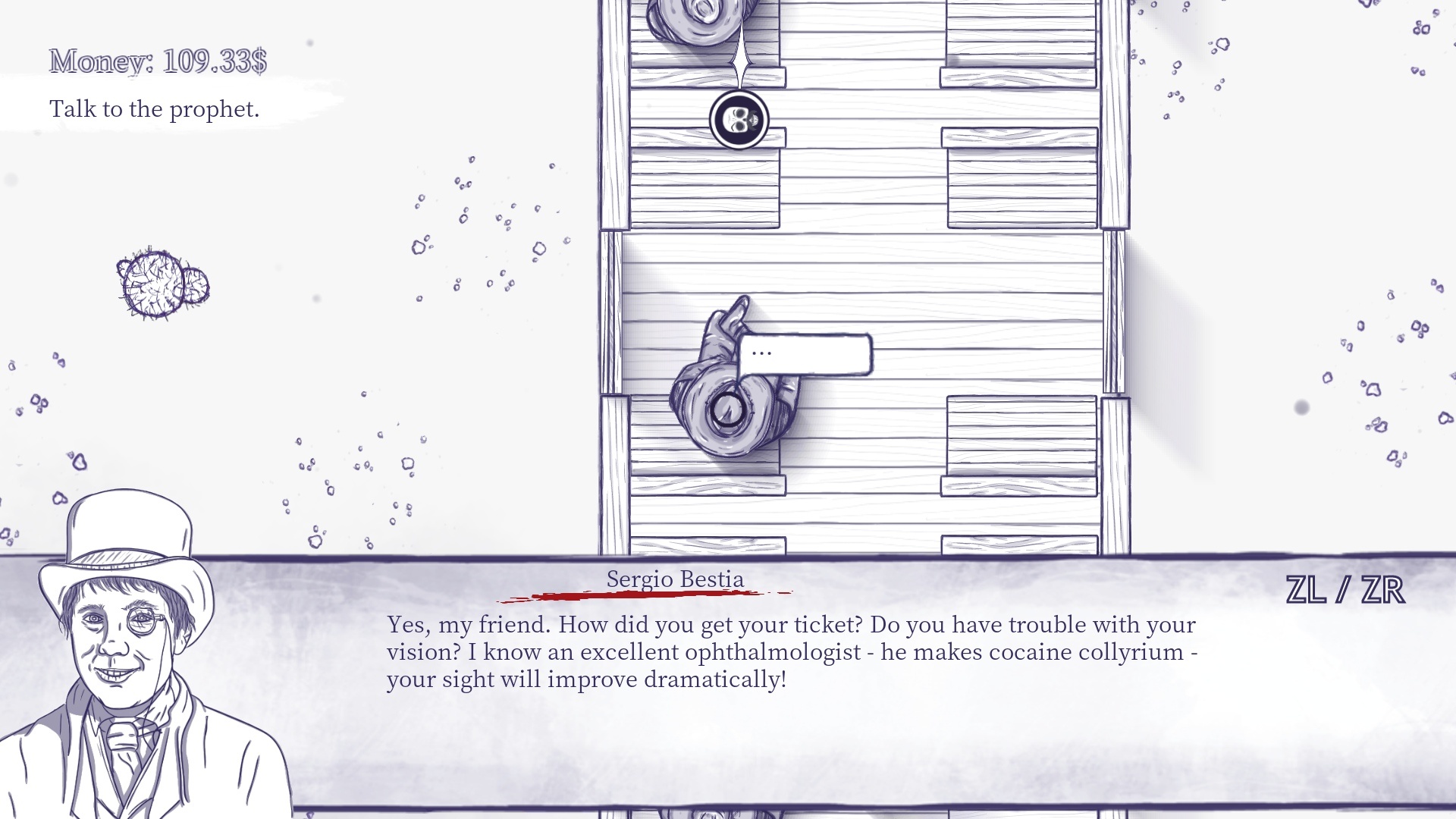 Travelling across the dusty landscape will give you Hotline Miami vibes, a game which draws obvious parallels to 12 is Better than 6. While the former focused on mêlée combat, the latter sees your top down hero packing all manner of western weaponry. From basic revolvers and shotguns, to stationary turrets that allow you to mow down groups of enemies, there’s plenty to get your teeth into. Rather interestingly, using weapons requires you to load ammo individually and then cock your gun before you can shoot. It’s an interesting mechanic, but not one that is shared with your enemies, who can hit you regardless of if they’ve loaded their gun or not. It makes combat frustrating, because if you alert a group of enemies and don’t manage to find somewhere to hide, you’ve got no chance of surviving the gunfight.

And those gunfights make up the majority of the game. There isn’t much to do except travel to new environments and remove the threat of a group of outlaws. Small changes break the monotony, such as holding up in saloons and facing off against waves of enemies, but the meat and potatoes rarely changes. Some missions require some degree of stealth, such as sneaking through enemy lines and taking out enemies silently, but really, it’s just more of the same. Occasionally you come across towns that you can explore, where you can spend money you find throughout missions, but they aren’t at all interesting to find yourself in. The same can be said for the purchase options, which are just slight buffs that don’t make the game anymore interesting.

There isn’t really that much else to say about the combat; you can auto aim so taking out bad guys is easy enough, but that’s providing they don’t get to you first. You can, however, use all means of cover, so whether that’s downed tables or the horses that litter the stables, you can try to hide out until you get your chance to return fire. 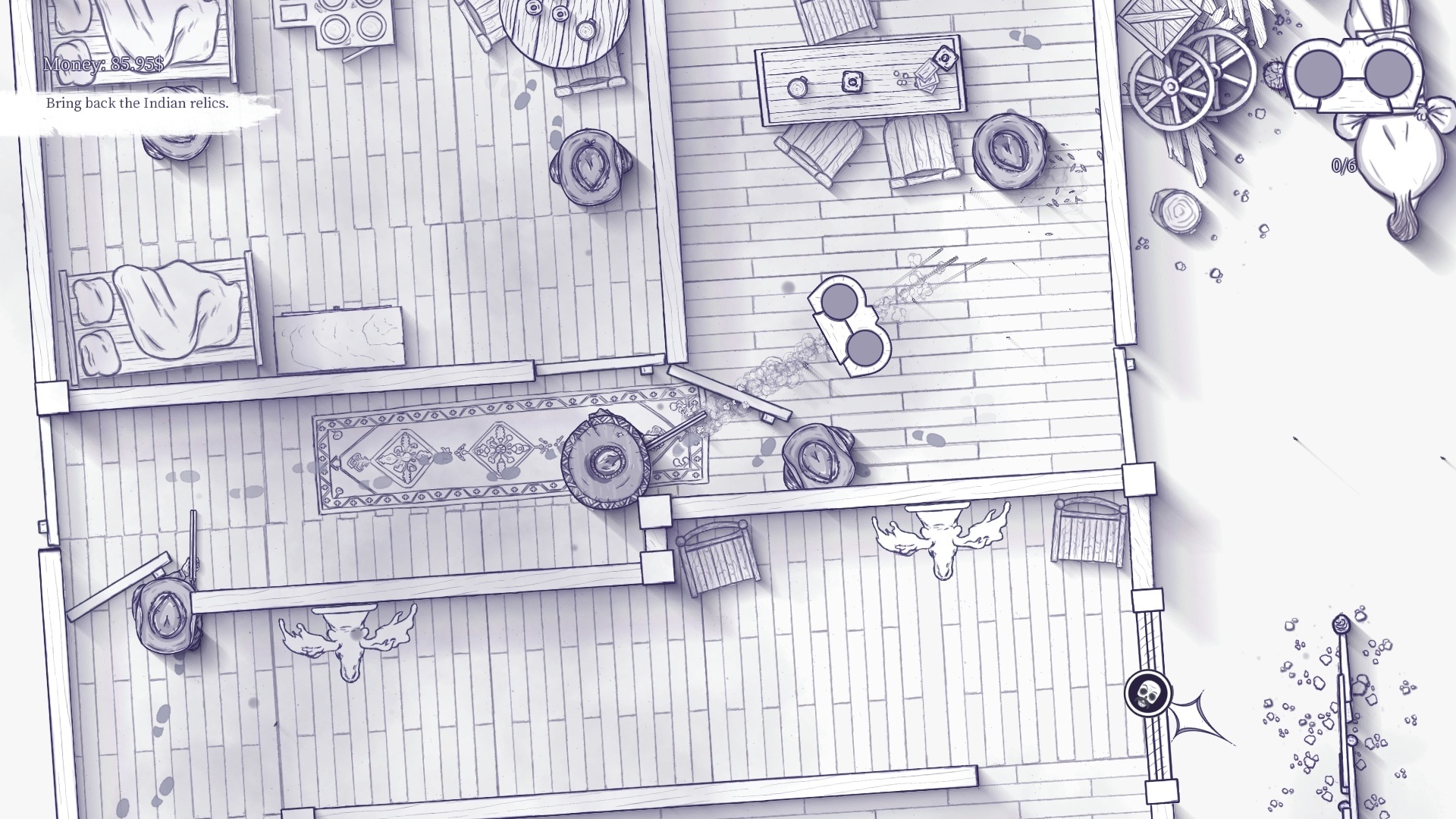 If you enjoyed Hotline Miami, you’ll definitely find favour in 12 is Better than 6. While definitely a simple system, it’s still downright addictive, which is partly down to the speed you get back into combat. Like its predecessor you can be back into the fold within seconds to try again, and this is what makes this type of game special. You get to learn from your mistakes, monitor the paths of your enemies and keep trying until you crack it.

The game does however need better optimisation for the Switch. It struggles when too much goes on, for example when surrounded by a group of enemies, if all of them fire at once the game begins stuttering at unsightly levels. Not only does this make the game less enjoyable but at times it’s downright unplayable. I’ve also had several occasions where I’ve been trapped by invisible walls, leading me to force restart and lose my progress in that level. These problems, especially the frame rate issues happen so often that it completely spoils the fast-paced nature of the game.

It’s such an interesting, addictive concept that, even with its above-average execution, you can’t be angry at 12 is Better than 6. Its gorgeous art design is marred by not entirely satisfying gameplay and horrible frame rate issues that take the shine off the experience, but it’s still a fun Western romp that we so desperately need more of.