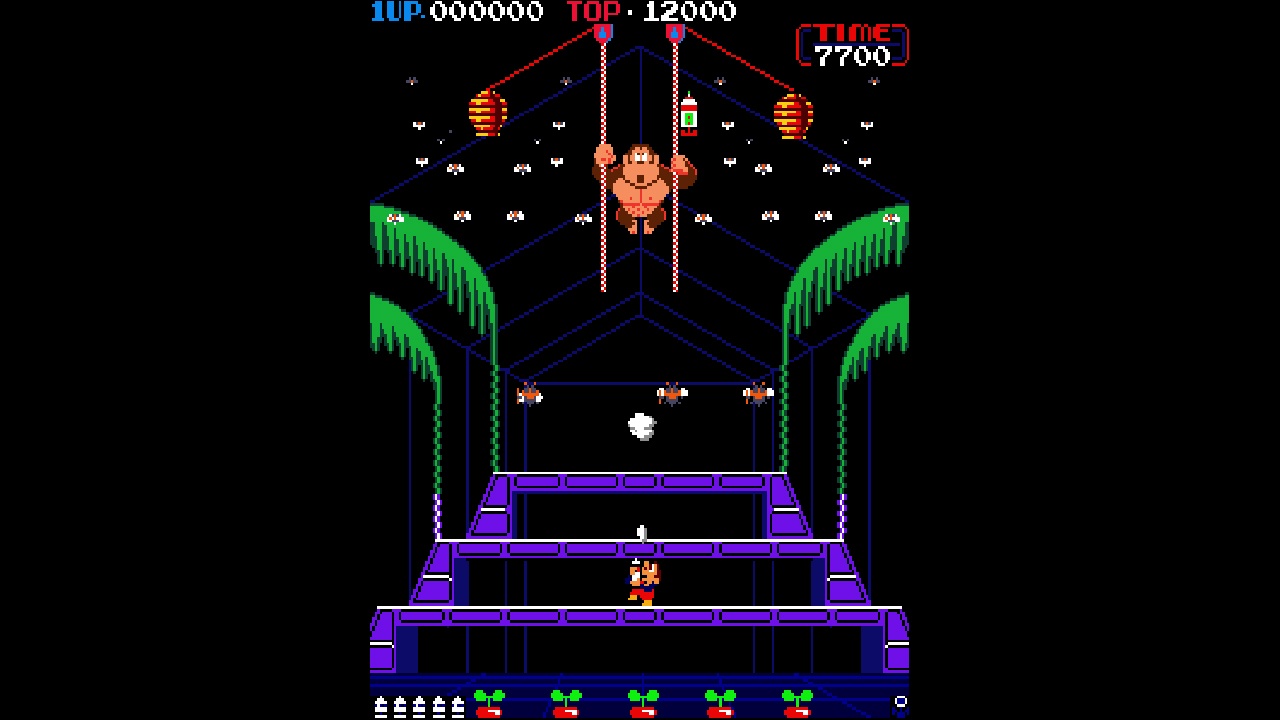 Part of being able to digitally archive the past is allowing history, for the most part, to be neutral. There are thousands upon thousands of years wherein the course of what happened was written almost entirely by the victors of wars and conquests, and the other side of the tale was erased, effectively, locking down history into a one-sided narrative. That’s all fine and dandy in the grand scope of things, but there’s something unsettling about knowing that certain events and actions might be shown in this magnificent and righteous light because the only ones left to convey the message were the ones who won. Thankfully, in the last century or so, there’s a much bigger push to collect information from both sides of the world, so that, when we hear about the victory over the Nazis in World War II, we also acknowledge that the United States was doing some awful internment camps of their own, and that Japan had some choices that ruined their relationship with the rest of Asia, oh, let’s say until the sun burns out. The point in all of this is that we get a chance to remember the mistakes of the past, no matter how painful they might be, in an effort to preserve the future. This, dear reader, is the intro to the Arcade Archives version of Donkey Kong 3.

If you’ve never played it, you’ve probably got some suppositions about how the game is supposed to be played. Naturally, since this was created over a decade before Donkey Kong Country changed the course of ape video game history, you know that it’s not a massive platformer with engaging mechanics and a vast number of collectibles, and that this game will not, in fact, contain Funky Mode. But you might be more familiar with the original Donkey Kong (and the sequel, Donkey Kong Jr.) and, since the number 3 is in the damn title, you’d expect it to at least continue the idea of ascending to another location to rescue someone while actively dodging some kind of enemy interference. This is also incorrect. Instead, you’re in the shoes of a greenhouse attendant named Stanley (yes, Stanley), who is dealing with the fact that Donkey Kong has decided to take up residency in his greenhouse, because this is back when the monkey was probably a little angry at humanity after the events of Donkey Kong Jr. You, Stanley, are not a Jumpman, but you do have your insect spray canister, which is to keep aphids and such off your beautiful flowers. Naturally, you can use this spray bottle to attack Donkey Kong and push him up and off the screen, dodging things that he’s throwing at you and other, aggressive insects at the same time. Theoretically, you can do this enough that the ape gets the hint and leaves, but this is an arcade game, that’s not gonna happen. 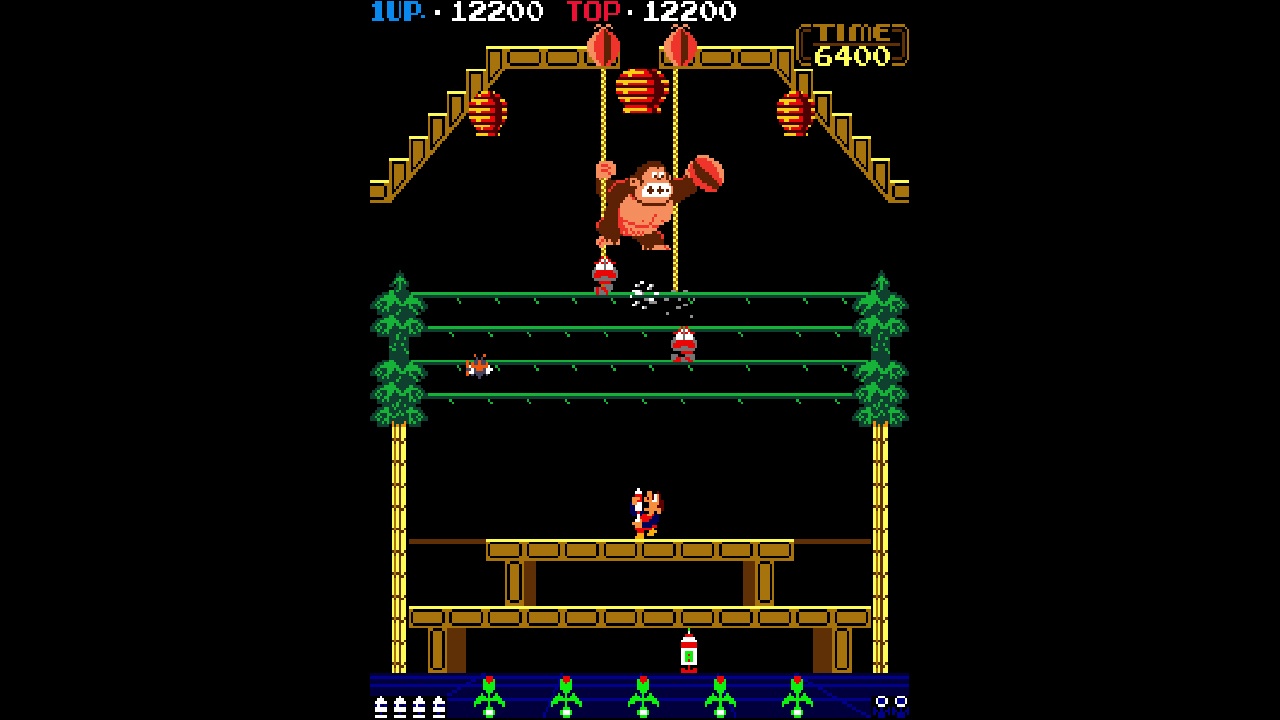 As a standalone title, Donkey Kong 3 is in a fantastic little paradox. On the one hand, the gameplay is so far removed from the original series that anyone who picked it up would be instantly, insanely confused. Instead of platforming, you have a sort of vertical shooter with one boss, no real change of scenery (there’s only three levels that loop) and one variable, a “super shooter” that grants you a temporary boost in range and strength of your sprayer. If you wanted the classic Donkey Kong formula, you’re totally out of luck. On the other hand, I’m not sure if the game would have even been picked up by someone else if it didn’t wield the familiar moniker, and thus the title would have never been made, and that would have been sad for everyone, because there is some merit to the game, as well as fun replay value. While not particularly difficult, there’s some good strategy at hand to figuring out how to rock the single player experience. Stanley can move side to side, but can also jump up and down a series of levels to get closer and to distance himself from Donkey Kong. The great ape doesn’t make things easy, riling up bugs to come attack you, throwing things at you, and always descending towards you unless you’re actively shooting the spray into him. It’s a testament to proper screen management and being quick on the buttons, and that actually conveys exceptionally well. Not to mention the variety of insects that attack and impede your success create some cool moments, like the queen bees that explode into shrapnel, or the crawly caterpillars that can protect Donkey Kong if you’re not using the super spray to get rid of them.

Hamster also did a fantastic job with this port, and it’s been a while since I’ve had a chance to play one of their emulation projects. The menus and layout are still familiar, but, with Donkey Kong 3, you can set some choices right from the very beginning. No longer do you have to fiddle around with things to get multiplayer on board, but you can assign it before you even insert the first credit. Additionally, the option to play vertically is offered at the preload menu, which was a massive surprise and enjoyment for me (proud FlipGrip owner). Since the real estate of the Switch is mostly unused in horizontal mode, being able to hold it vertically and get a more “arcade” feeling lent some great credibility to the overall port. Additionally, the sound and color correction of Donkey Kong 3 has been well handled. Though you can still add filters through the menu to recreate the retro experience, the main game itself is crisp, bright but not overly saturated. The sounds are still some classic bleeps and boops (no orchestrated soundtrack on this one) yet they come through crystal clear on the Switch’s speaker. For a lot of people, any experience they would have had with Donkey Kong 3 was probably a very confused play of the NES port that was released a full three years after the arcade and Family Computer versions. Making this definitive version available for fans is something that I really like about the Arcade Archives: you get to see some of the games that made up the foundation of Nintendo as they were originally intended, not just as you saw them on your VCR-designed grey box back in your parent’s carpeted basement. 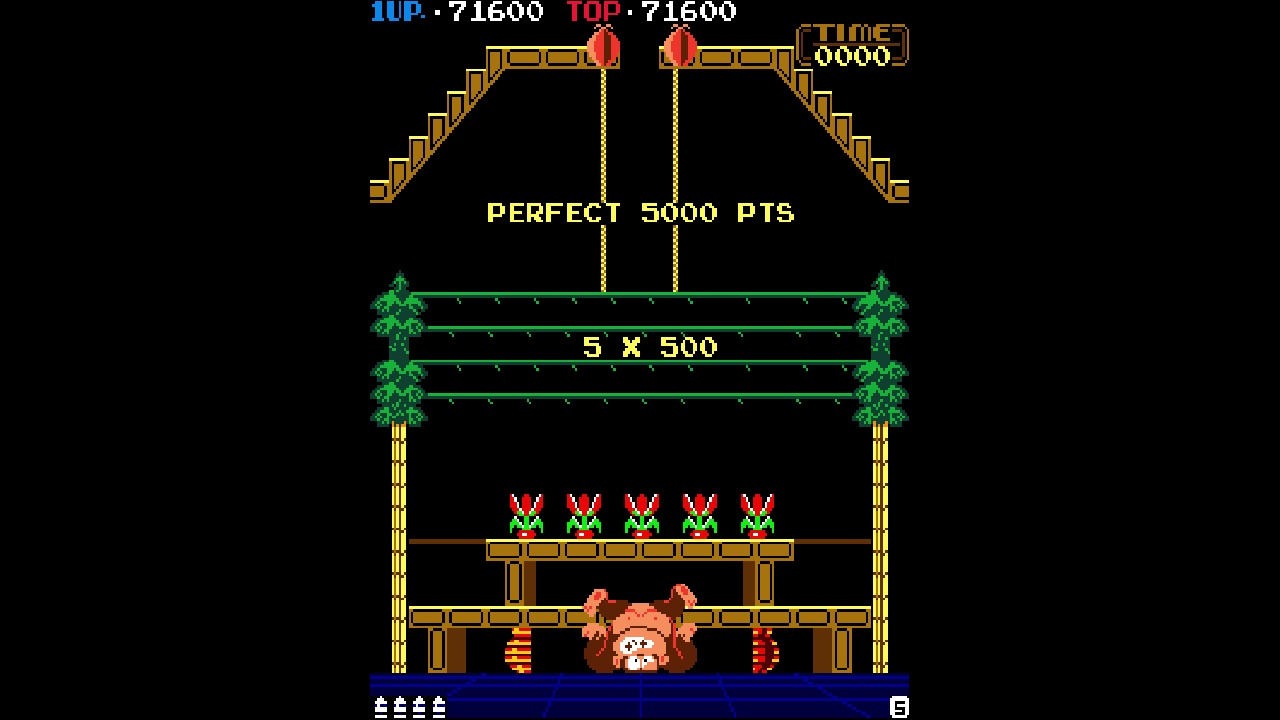 The two player mode of Donkey Kong 3 does change the dynamic a bit, as having two sprayers makes things more interesting and chaotic, and the difficulty scales accordingly. While it’s nothing wildly different, it’s a fun enough addition and at least adds something more than just “there’s this arcade game, play it alone.” Personally, I preferred attempting to fight back against Donkey Kong solo for the challenge and not feeling like I was invading my teammate’s spot, but it doesn’t make the doubles mode bad. Just not for me.

Donkey Kong 3 is such a bizarre game that exists purely because someone bet Nintendo could do it and get away with it, and goddammit Nintendo did. There’s a handheld version of this in the Game and Watch flavor somewhere, and a crazy sequel that never left Japan but exists in the digital archives (again, thanks Internet!) if you search hard enough. While not even close to anything you’d expect from Donkey Kong of any generation, it’s still video game history, and it’s worth playing to see what the hell the 80s were all about. The logical jump from “rescue someone from something” to “shoot a monkey in the butt with a gas gun” could bridge the Grand Canyon, and they did it. Hamster has really stepped up their porting game, and this arcade version is pretty tight and works well. Grab it to continue support of the Arcade Archives, and grab it because, what the hell, how else will you play this game?

Donkey Kong 3: somewhere between classic arcade and the modern platformer, there was a game where you shot Donkey Kong with bug spray.