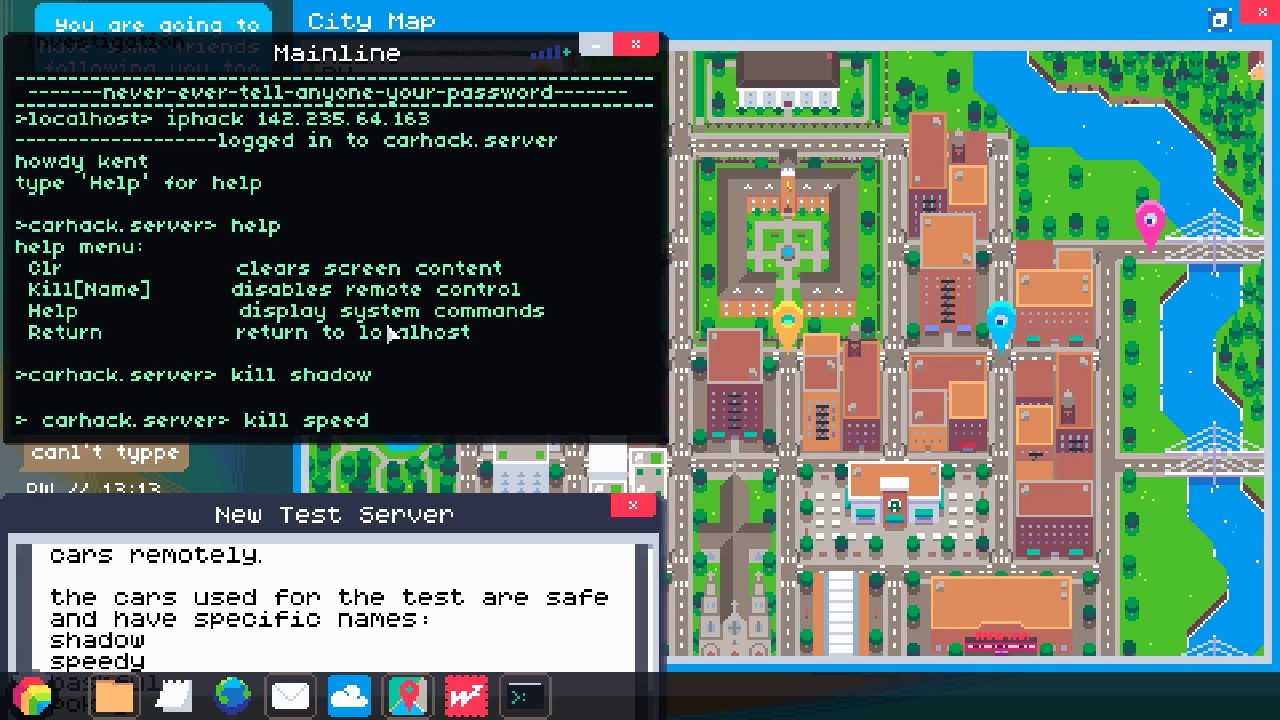 Computer hacking is one of those things that always, ALWAYS looks better in the movie. Ever since the masterpiece that was Hackers, there has been a contingency of people that at least half-heartedly believes you can hack a computer with flashy graphics, lightning fast code and fingerless gloves, and that it’s always divided into good guys and bad guys. Anyone who’s picked up a couple of issues of 2600 or wasted time on trying to compete in Brick House competitions knows that the truth is far…more boring. Well, at least visually. Hacking is a pretty broad term for a number of activities pertaining to gathering information, and a majority of it involves either sitting for hours at a computer banging out terminal commands, cold-calling people and social engineering out passwords, or shimmying up telephone poles with a set of alligator clips and praying no one calls the cops. Still, there’s a great interest in a “realistic” hacking game, and we’ve seen some success (Hacknet comes to mind) into making this a reality. Now, development team Rebelephant, along with Merge Games, has decided to take a bit of the keyboard cowboy world and bring it to the Switch with Mainlining.

Mainlining puts you in the role of an MI7 operative, working in a very realistic version of our own world. After some legislation passed to allow any and all data be made available to authorities via the BLU Pill Act, users of the world, both legit and otherwise, were quite angry and launched a small cyber attack on Big Brother and crashed a network of computers. You, a random agent, are sitting at your desk and trying to get situated, and need to immediately look into who perpetrated the attack, but it won’t be easy. You’re still operating inside the confines of the law: you need to have a name, a location, and some evidence that proves they’ve committed a crime in order to lock them up. Thankfully, you’ve got a vast array of computer tools, a highly competent network of informants, and carte blanche on whatever you can obtain through digital means. Yet, from the very first arrest, you can tell something is off, and you slowly begin to realize that the tendrils from the so-called Freedom Wire might be wrapped around something even bigger than you realize. From cyber crime to homicide, you’ve got your work cut out for you. 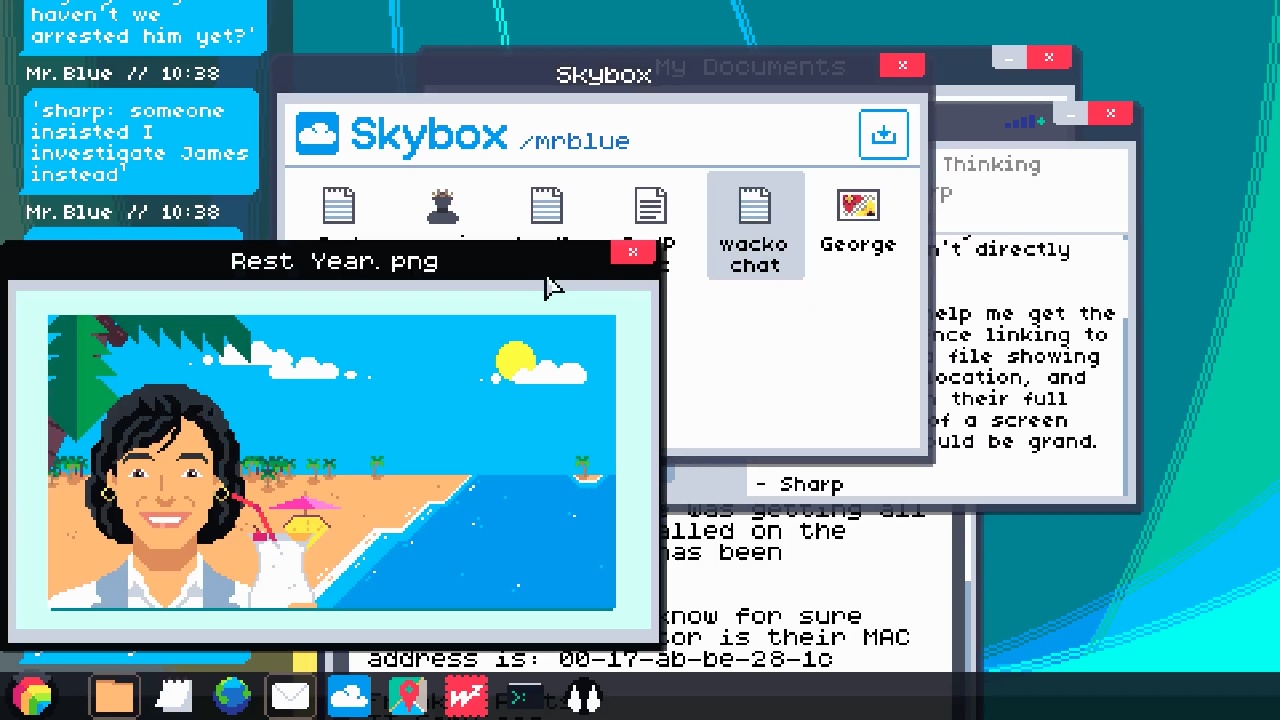 Mainlining presents itself as a point-and-click style adventure, but there really is a lot more to it. It’s like calling Phoenix Wright a point-and-click game: while technically correct, the execution and storyline make it far more compelling. As we mentioned above, the objective is to get people behind bars, but you can’t go arresting people willy-nilly, it’ll never stick. Through tracking them via websites, scraping files from their websites backends, and, later, literally tracking them through GPS surveillance, you need concrete evidence to get people behind bars and keep them that way. Each successful arrest leads to the next chapter of the story, wherein Sharp has to go after drug pushers, further members of the torrent website Freedom Wire, and other bad guys linked to the potential information attacks. You also will have the ability to remotely connect to criminal computers, letting you literally sift through their files and history in order to find other evidence to arrest further criminals. It’s a lather/rinse/repeat sort of process, but, thankfully, no two cases are alike and you’re given the freedom to figure out the how and why to successfully make the arrest.

There’s a lot going for Mainlining that’s in a positive vein. First, I adore the aesthetic of the entire game from top to bottom. There are distinct OS choices between the different machines, and the slightly grainy pixel design really evokes the older generation of PC gaming, throwing back to the late 80s/early 90s and reminding me of the sort of adventure games that caught my eye at the time. Everything is distinctive enough to remain identifiable and separate, so, even when you are looking at a massive pixel map of the surrounding city, it’s easy to see individual landmarks and buildings and appreciate them as such. Additionally, the layout between the computers says a lot about the personalities behind them, from the IT controlled organization of the MI7 boxes to the powerful but strangely cold Thorn computer. The music is incredibly minimalist, working with a lot of deep tone atmospheric sounds, but you have sound effects peppered throughout that dreg up a lot of memories from startups, errors and shutdowns across several ages of PC. It’s pretty damn satisfying.

The gameplay itself of Mainlining is an exercise in patience, and I mean that in a positive way. Recently, I’ve been playing a lot of games that require you to accomplish things as fast as possible, as the time ticks down and the hell draws nearer. With Mainlining, you’re given sufficient time in the beginning to get your sea legs and understand what you need to do with multitasking, and then you’re off to the races, with each case having a bit of pressure to it but nothing in actual severity. You learn to swap between web browser, terminal, downloads folder and email, all while a constant stream of chat notes comes barging in, giving you either clues as to what to do next or just ambient chatter/taunts from connected people. If you’re a bit more analog, I would recommend having an actual notepad with you to jot down things, as you’ll need to make a few logical steps on your own before you can get the digital evidence and issue the warrant. The commands for the prompt are at least in vein with real commands on your average computer, and the slightly outsider feeling of remoting into someone’s computer is very realistic. I did enjoy the constant give and take as I rifled through files, made notes, double checked emails and confirmed that car colors and GPS coordinates were lining up. Once I finally arrested someone, it was a rush of satisfaction. But when I arrested the wrong person, I felt…well, nothing, because there isn’t a penalty. This was a bit of a letdown for the game, simply because it removed that feeling of needing to do the job right. I tested and literally arrested the same guy seven times with the wrong evidence, and it just said “wrongly accused.” Then, when I got the right evidence, no one said “Wait, weren’t the cops harassing this guy like eight times a week?” It was just “Good job getting th3 h4ck3r!” 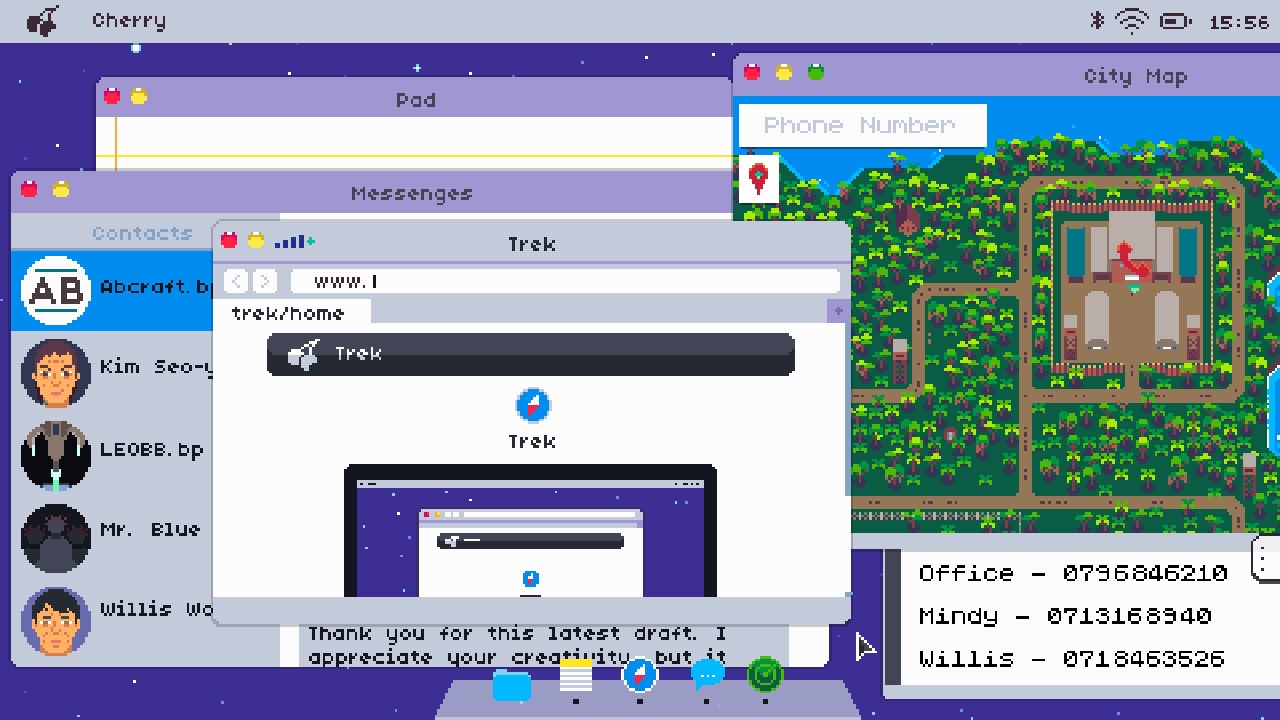 Playing Mainlining on your Switch is just a bit of a difficult chore at the current time as well. Since a majority of the deep diving needs to be done via keyboard, the developers did a great job of integrating a touchscreen, popup keyboard to help the process. This does, however, create a three headed problem. One, it’s another window on the screen, which eats up your already limited real estate with trying to type in the command prompt, the website and the notepad, not to mention other windows you may have open. Secondly, the touchscreen is the best way to go (both for the keyboard and general navigation),  but you gotta be accurate and contend with an even more reduced screen. Thirdly, docking it creates a long, arduous process of typing with the ZR and ZL keys while moving TWO cursors with the left and right joysticks. After a period of time it gets easier and faster, but damn is it a slog at first. I thought I was being all clever and could circumvent this with my Nintendo Switch Keyboard, but, since the soft keyboard is a proprietary instalment for Mainlining, the USB keyboard can’t override it. So this already decent length game goes quite a bit longer, owing to you moving slowly across the desktop.

Don’t get me wrong: Mainlining is a very cool experience. The story and characters are compelling, and there’s tons of dry humor and references baked into each and every case. I was drawn into the world and wanted to figure out as much as I could through my own skills, even going so far as to order drugs from the internet (in the game) to see if that could lend me some evidence. But I can’t lie and say that it was an easy and accessible game to get into. If you’re hooked by the presentation and the storyline within the first 20 minutes or so, you’ll be in it for the entirety of the game. If, however, you’re totally put off by the pacing and the interface, you might be looking to disconnect long before we find out the true identity of Mr. Blue.

An absolutely brilliant and unique game that has gorgeous design and execution, but gets positively hamstrung by the way that Switch users have to interact.