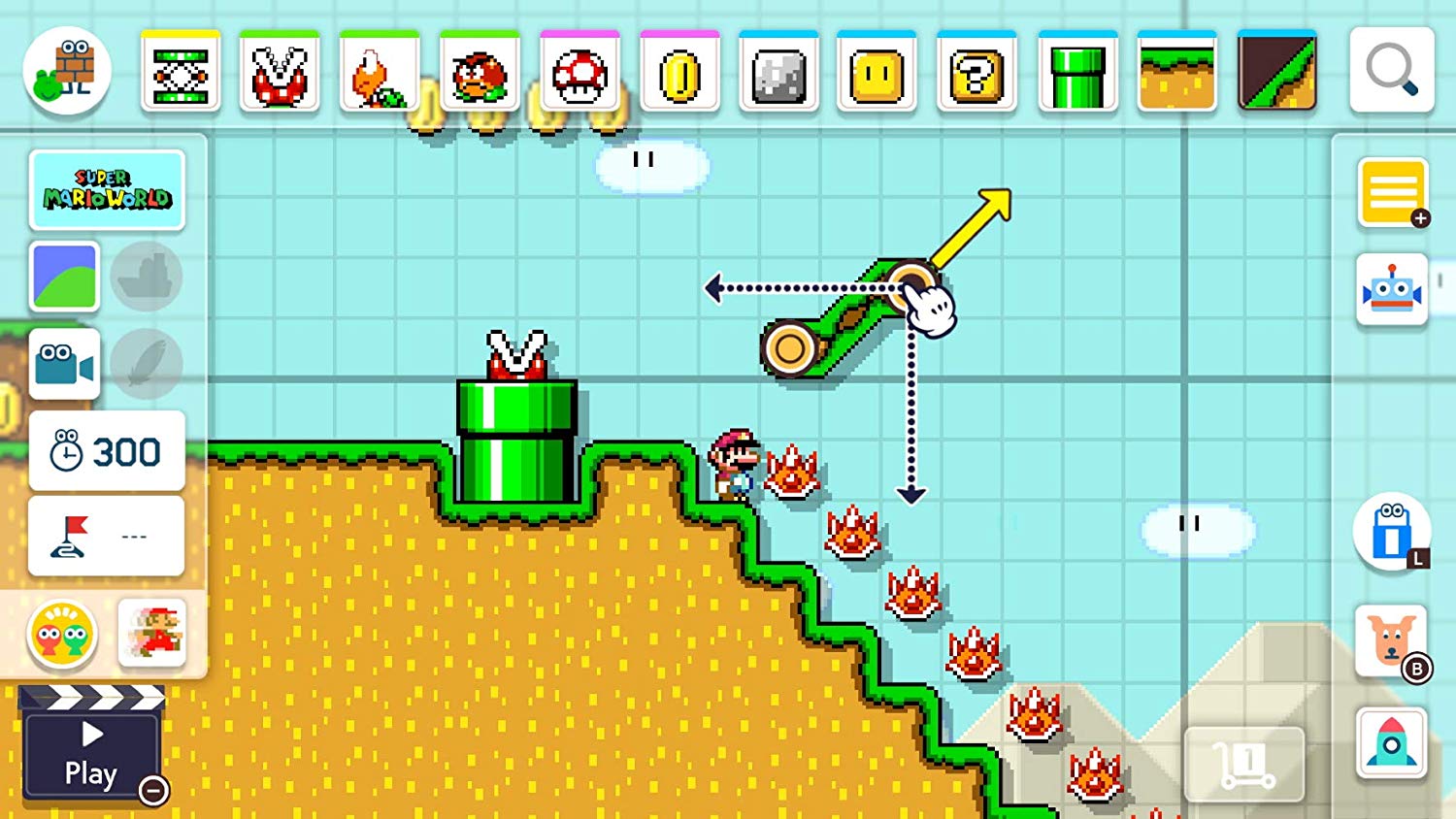 How do you review a game as intricate as Mario Maker 2? It would have been easy to copy and paste its Wii U predecessor, but the Switch sequel is everything but a case of repackaging. Mario Maker 2 is an exemplary platformer, a decent online multiplayer and an exceptionally powerful creation tool that’s both intuitive and easy to use, making this the finest course creator on the market for every skill and ability level. You really can have Mario, forever, on the best Nintendo Console in history.

As much as I love playing with the games creation tool, the most exiting aspect of Super Mario Maker 2 is the game’s expansive campaign. Instead of a generic Mario solo venture, the professionals have flexed their creative muscles and used the heaps of tools the game has to create Mario courses you’d never thought would be possible. There’s everything from crane games, where you guide Goomba’s across the map to drop keys to Mario underneath, to quick-fire mazes where you have to avoid spiky walls to reach the end flag before the time runs out. There’s typical Mario run and jump levels thrown into the mix, usually with a fun shtick, which make for a nice respite from the more out there designs.

In other levels, the game makes use of course clearing rules, like vaulting off a set amount of trees before reaching the exit or finding a Toad before you can go. In one level early on, you can’t jump throughout the round and can’t leave the floor at all. It’s a weird sensation, especially as naturally you want to jump, instead having to rely on environmental triggers and enemies to get you to higher ground. In another, the game becomes an on-the-rails shooter in a fun segment across a deadly lava field. These are the levels that stand out the most, demonstrating just how inventive and effective the game can be.

The quality doesn’t ever really dwindle, either. It’s incredibly well-rounded, with an even difficulty level that doesn’t feel unfair or punishing. Even the harder levels can be skipped and cleared automatically, so even if you’re finding yourself getting frustrated you can move on and come back later to try again. A really nice touch is the loose storyline that involves Mario rebuilding the Mushroom Kingdom castle. It gives you a reason to collect coins, using them to purchase new parts of the building. Unlocking parts also allows you to travel across the castle, interacting with the inhabitants who usually, give you new missions to complete. Completing achievements unlocks new items and clothing which you can use on your Mii, which serves as an extra incentive to complete the solo adventure. 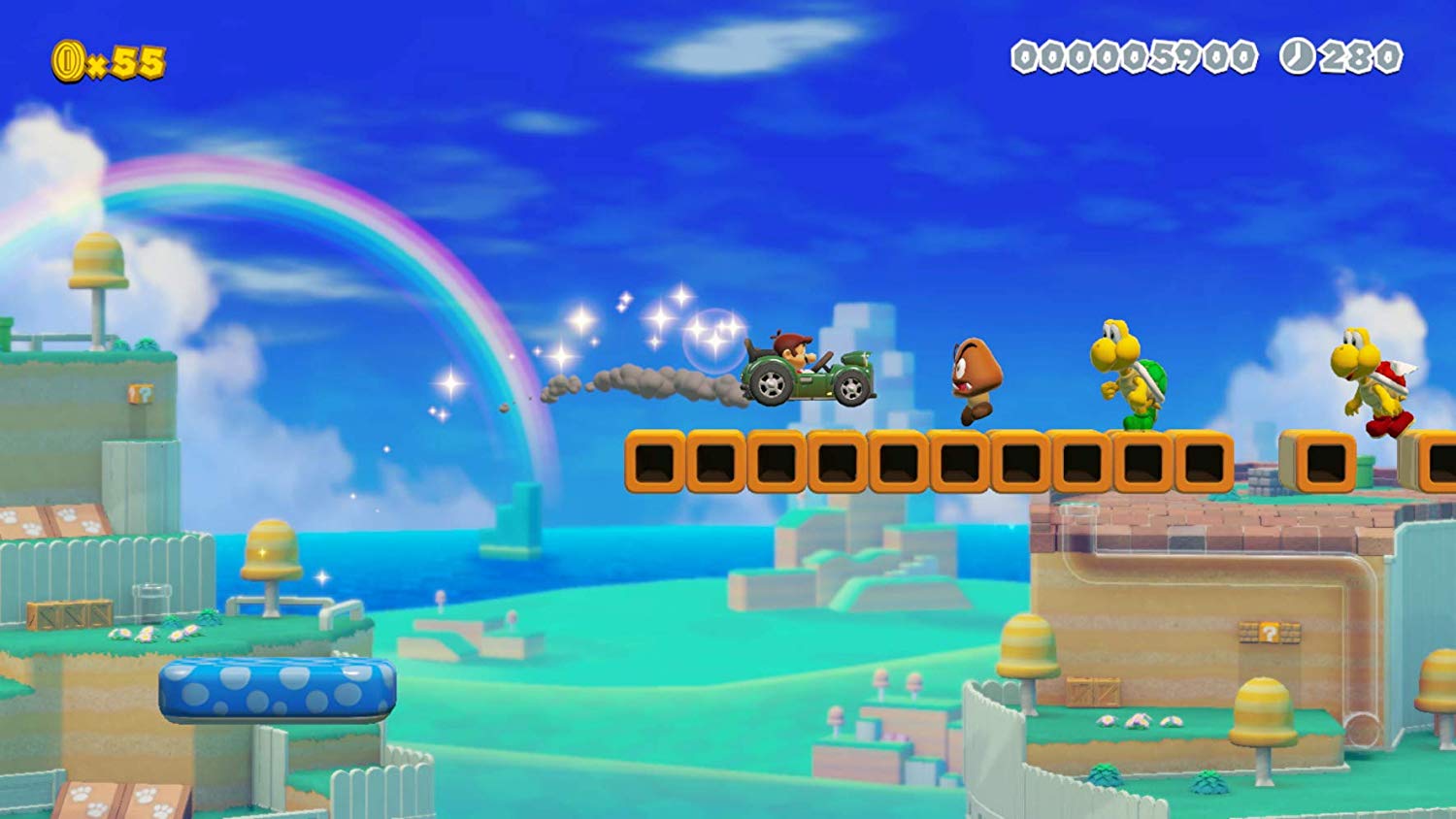 Both the creation tool and solo mode make use of several incarnations of the red plumber- Mario Bros, Super Mario 3, Super Mario World, Super Mario U and Super Mario 3 World. Each generation of Mario gives the creation tool new assets to play around with, giving every course a life of its own. Courses created on say, Mario Bros and Mario 3 tend to be more traditional game types, but the latter play styles of World and Mario U allow for designers to mess around with some of the quirky inclusions that come with modern Mario games, such as cars and cat Mario.

If you’re familiar with Mario Maker, then the base game remains the same, but there’s ample new stuff to make this absolutely stand out. Even simple things, such as allowing you to create slopes, change the game in a big way. The same can be said for On-Off switches and See-Saws – they allow you to create more diverse and interesting courses that the original Mario Maker simply couldn’t do. What’s crazy is, things that seemed obtuse in base Mario games (such as Dry Bones shells and snake blocks) can be manipulated so cleverly in Mario Maker that they become viable tools to change the way we see Mario games and platformers as a whole.

Squeezing all these tools onto such a small screen is obviously a challenge, but Nintendo have done a fine job at making it accessible and uncluttered. Choosing items is done via wheels and, once picked, they go to your quick choose bar that sits at the top of the screen. This is fully customisable, allowing you to stick items you use often in place for easy access, and you can move and swap items at your leisure. Long pressing items, such as enemies or mushrooms, will give you alternatives for these such as making them giant or giving them wings. Different items have different effects on others, and it’s all about playing around with everything to see what works.

There’s also ample tuition, and the guide is well put together and answers any questions you could possibly have, but there’s plenty of trial and error involved. Whenever you make changes, you can quickly jump into the course with the press of a button and try out what you’ve created. It’s a seamless transition between both too, and it doesn’t slow down your progress with nasty load screens whenever you want to see if what you’ve created works out how you imagined.

The only drawback of the course editor is that, really, it only works in handheld mode. There’s not much fiddly button pressing – in handheld form most of the creation tool utilises only the touch screen. There are things that require button pressing, but it never feels cumbersome or cluttered. When you compare to the game docked, it’s simply too much bother using the buttons to make choices alone, and dragging the joysticks is simply not fluid enough when compared to using the Switches touchscreen. I suppose though, this is why the Switch is such a fantastic console; edit in handheld and then whack it on the dock when you want to play.

Once you’ve had enough of making your own courses, you can sample what players across the world have been making. There’s a great search function that brings up popular courses for you to try, as well as having a detailed refine function for you to limit to the type of game you want to play. It’s a good way of weeding out the lacklustre courses and trying out the best the game has to offer, as well as sticking to the Mario generations that you prefer. 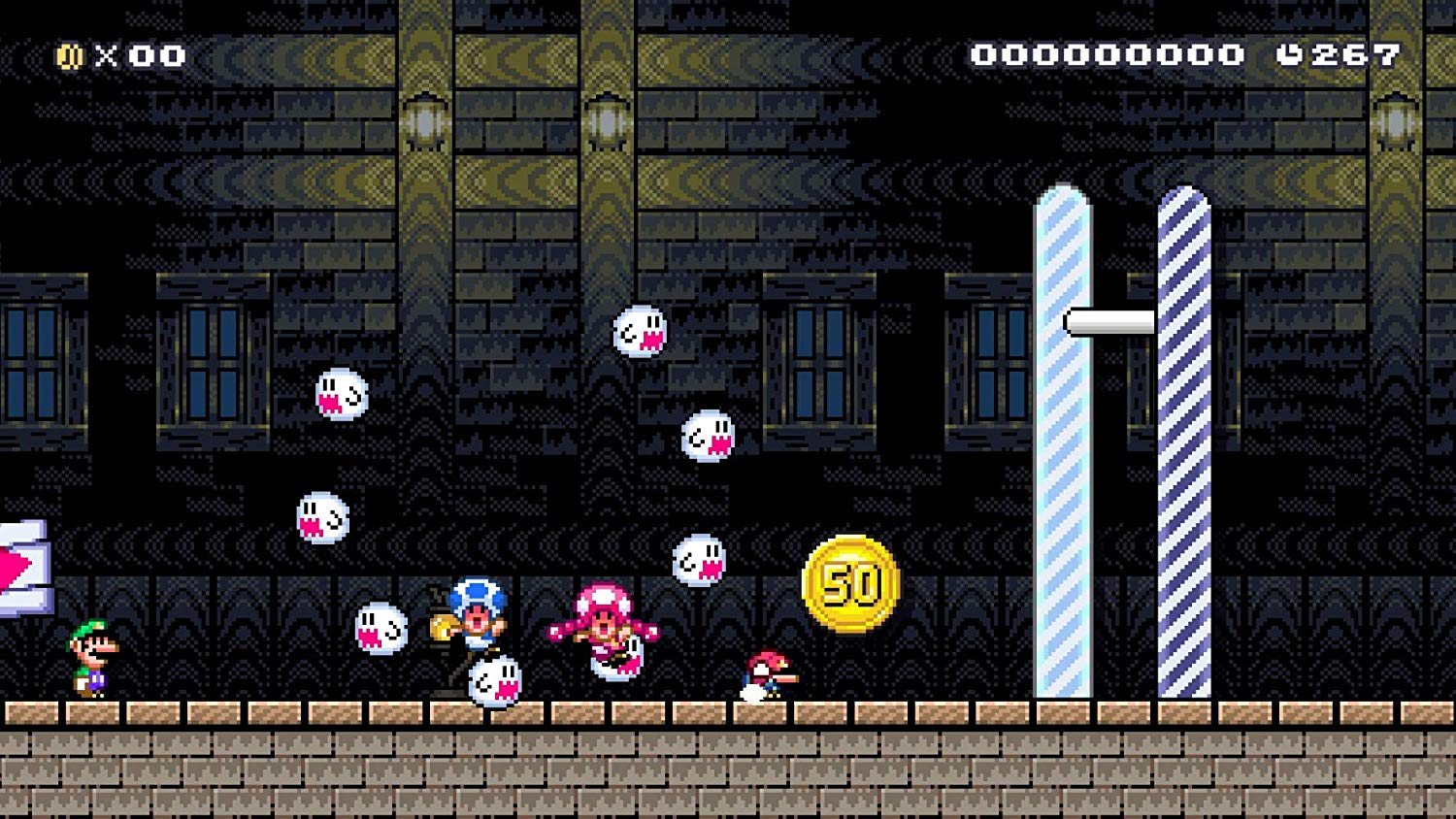 As well as picking and choosing player made courses, the game has an endless mode that, with a handful of lives, sees you try and survive through a random selection of levels. It’s a fantastic way to sample some of the games courses from across the world, but obviously the random aspect means the quality varies. If you do come across levels which you deem unfair or too hard you can skip them, moving onto a different, randomly selected course.

There’s ample multiplayer to be had, but it’s hit and miss and really comes down to the company you keep. You can take part in online and local co-op and verses modes, but overall, it’s another case of Nintendo making weird choices with the multiplayer aspects of their games. While it’s coming in the future, you currently can’t play online with friends, having to rely on random matchmaking. This makes having a decent online experience difficult as you’re not guaranteed to have someone as dedicated as yourself to completing the courses, especially in Co-Op. It’s incredibly frustrating, and, in a game that revolves around precision, it can be painfully laggy. Versus (a straight run to the finish), is a little less bothersome, but it still has the same pitfalls as online Co-Op. It’s still silly, chaotic fun, even if it doesn’t even touch the solo mode in terms of quality.

Couch play is pretty much along the same lines, however you can eliminate some of the pitfalls that random matchmaking can create. You can play on a single Switch or up to four consoles, allowing your friends to try out online courses and those that you’ve made yourself. What you can’t do, however, is work your way through the campaign mode which is reserved for solo players. You can also create courses along with your friends which is as ridiculous as it sounds. The quality obviously varies dependent on you and your friends imaginations, but it’s still fun to try, experimenting with the endless opportunities the game has to offer.

Super Mario Maker 2 is a triumph. It’s one of Nintendo’s best titles in its entire catalogue, as well as a must-have on the Switch. There’s endless opportunities for those with an imagination, but gamers who don’t want the stress of making courses can relax with the infinite content at hand. This really is Mario, forever.

Super Mario Maker 2 presents an incredibly powerful creation tool and one of the finest Nintendo titles in their entire catalogue.