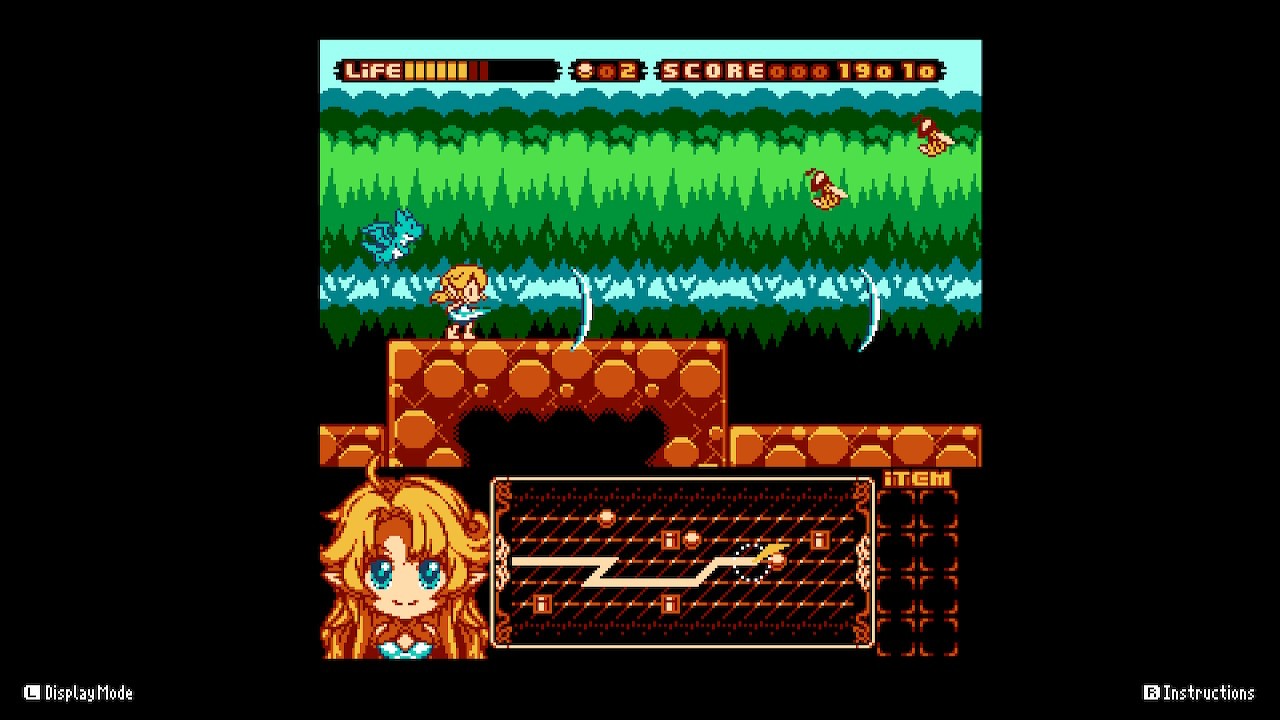 If the tale of Yu-No: A Girl Who Chants Love at the Bound of this World is anything, it’s a giving, phenomenally grand scale game. The number of pathways, interactions and ideas to solve is staggering, and the voice work and display is superb. But Mages and Spike Chunsoft had to keep to the original as closely as they could, and, as a result, the fallacies are still kept intact (as I pointed out in my review). However, to keep the spirit and the excitement alive, there was also an additional title created for the “Day One” release of Yu-No: a sort of side adventure to keep people interested and to entice them into getting the game sooner rather than later. That game is Yu-No’s Great Adventure, and it’s one of the best retro homage games I’ve ever played.

Yu-No’s Great Adventure is a sidescrolling action game starring everyone’s favorite dimensionally displaced heroine, in a time that takes place somewhere outside of time, which makes sense if you’ve gotten to Dela Grante in the main game and makes no sense otherwise. The actual plot synopsis leads to questions that could spoil the visual novel, so just know you’re playing a game where you’re trying to defeat a bad guy boss. As Yu-No, you must run and jump, shooting down baddies (like bats, gorillas, ghost knights and spiders) as you move towards your goal of the big bad at the end, with a handful of minor bosses inbetween. 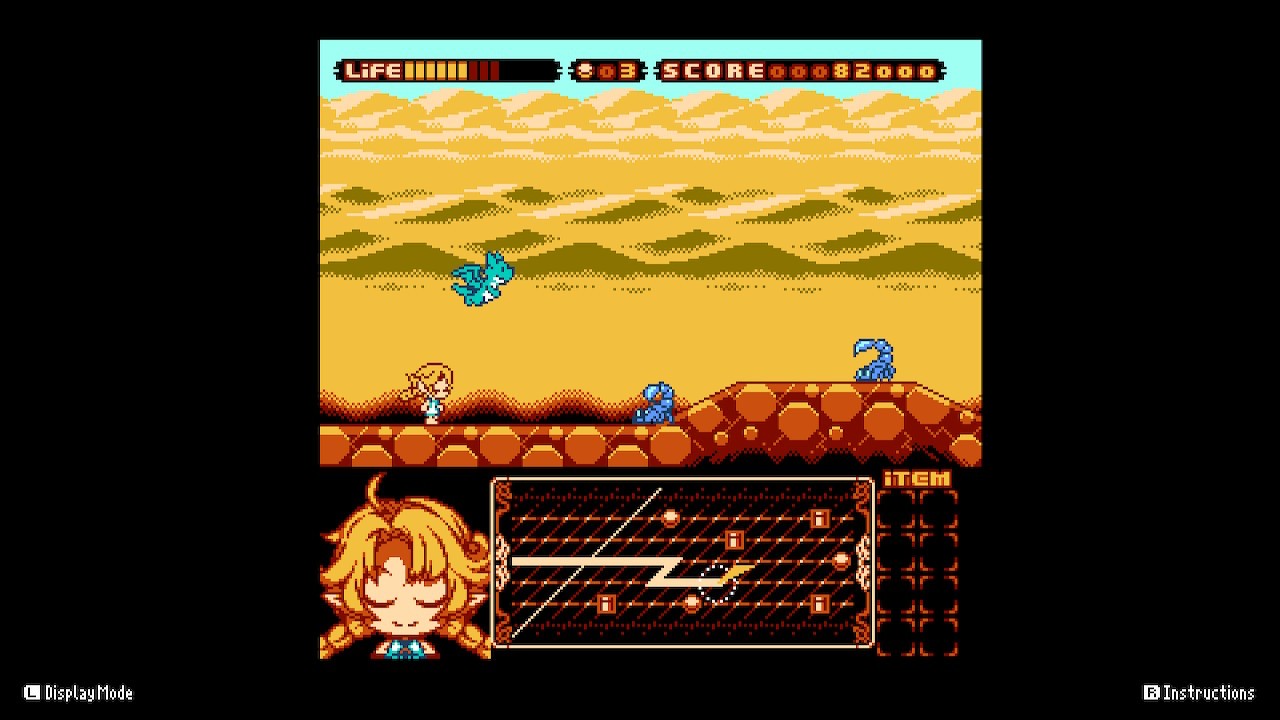 Yu-No’s Great Adventure, from the beginning, does an amazing job of capturing the positive and negative effects of games from the 8-bit generation. On the one hand, I absolutely adored both the visuals and the soundtrack. Done up in full pixel magic, you can see the clear match to Yu-No as the main character, even though she is in significantly more detail in the visual novel. Spike Chunsoft got some great people to ensure that, with game elements like an apple to make Yu-No “power up” (and then powering down when taking a hit), she was still mostly the same character and was familiar throughout. The different enemies have a variety to them, each popping in a great color palette that shows we went slightly beyond true 8-bit but still kept in the theme. Additionally, the chiptune soundtrack is equal parts driving and atmospheric, drawing you into the gameplay and keeping you firmly seated. I got the feeling that some of the tracks were clearly inspired by the main game’s soundtrack, but I couldn’t say with complete certainty, because my ears were biased. In any case, it evokes a good mixture of what Yu-No brought to the table and also throwback titles like Castlevania and Mega Man.

On the other hand, the classic elements can sometimes bog down the game. For one, with keys bound and unchangeable, I was a bit frustrated to have jump as A and shoot as B, instead of the other way around. The automatic scrolling wasn’t a massive penalty, but, for example, if you missed a crucial item box, you could be in serious trouble. As Yu-No runs along, there are several pickups that she’ll see, from meat and apples to replenish her health and power her up, to dragon eggs (to summon Kun-Kun, whom you can ride upon), jewels (for the A.D.M.S.) and the item boxes. Inside these boxes might just be coins or food, but there can be actual, game changing items that you NEED in order to get further. Boosting your attack or surviving in the pits is one thing, but there’s an actual key that you have to get before you can fight the final boss. If you miss it, you can’t finish the game, so the scrolling can be a pain. Oh, and jumping was never good on a single 8-bit game, so I didn’t expect much here. Yu-No can be really floaty at times, which helps with large gaps but can throw you off target with landing on small platforms, so just keep that in mind.

However, what is injected into the game in terms of creativity is what makes Yu-No’s Great Adventure really shine. Again, collectible items to change the gameplay is something that marked a lot of the greats of yesteryear, and the ability for Yu-No to get stronger and also have a revive on hand is invaluable. Riding on Kun-Kun changes it from static movement to full screen exploration, making certain things easier and others a lot harder, and also spawning darkly comic moments when, if you’re hit on the dragon, the dragon dies and turns to meat (which you can then eat to recharge health). The sheer variety in bad guys is astonishing, because there were almost no repeats between stages, and this was further improved by the different minibosses between the worlds whom you need to defeat in static order. The bosses actually have good, assorted attack patterns that make them even better than the Koopa Kids of Mario 3 in terms of mixing it up, so I was truly surprised by that. 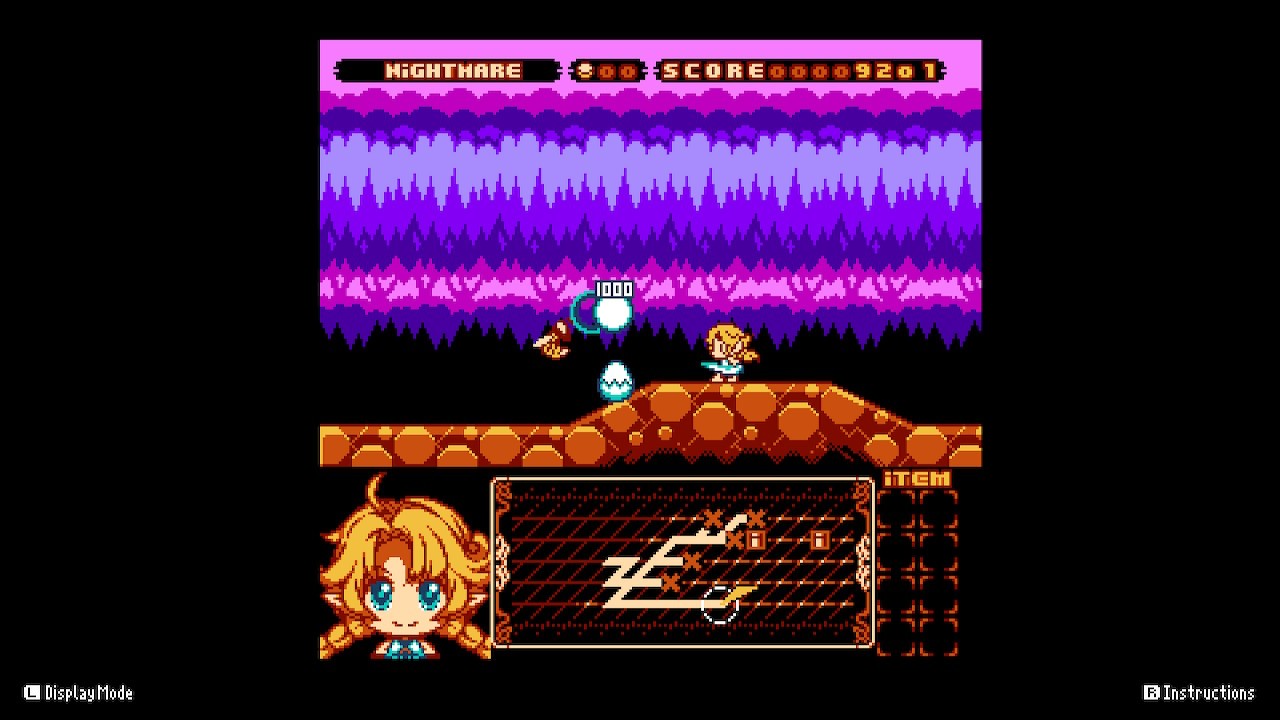 Perhaps the biggest draw of Yu-No’s Great Adventure (and the most innovative) is incorporating in the A.D.M.S. map as a part of the actual gameplay. As Yu-No runs along, she can get jewels to create jump states, where she can go back in time (to a point) and change the path that she ran upon in order to affect her future. This works on so many levels and is so gratifying it boggles the mind. Sure, you can use it to go back in time and grab items that you missed, but it also helps you prepare for future stages, where it seems the world becomes more and more unstable. Stockpile jewels to the best of your ability and do your best to find the best equipment within those boxes, because the timelines here are also unstable. You can easily get sucked into a spiral, which is a dimensional anomaly that will end your game unless you change paths or have a jewel to go back in time. You have small dimensional rifts that’ll throw you, unannounced, to other parts of the map, and you can only see them if you find the R Device hidden in one lucky item box. Different additional pickups gives you greater control over the map, allowing you to carve the best path to Ryuuzouji (spoiler, he’s the bad guy) and defeat him. It’s such a cool mechanic, and it makes this otherwise cute-but-simple homage game pop in a big way.

If you’re good, you can probably get from the beginning to the end of Yu-No’s Great Adventure in well under an hour, but don’t be disappointed if you can’t get too far in your first run. Not only is there a learning curve in figuring out the map, there’s also a bit of luck that you’ll need every time you step into a new area. I still can’t figure out if there’s procedural generation at play or if there is a pattern I’m just not seeing, but I keep trying anyways. I honestly believe this is a fun enough retro experience to enjoy even if you’ve never played YU-NO, and I think this was a wonderful treat to include for the fans of the VN. If you’ve already gotten the full package, enjoy this game. And, if you haven’t, I sort of hope it’s available separately, because it’s legitimately fun.

A delightful little adventure, Yu-No is back in an 8-bit scroller that has a surprising amount of depth, replay, and genuinely interesting gameplay at work.