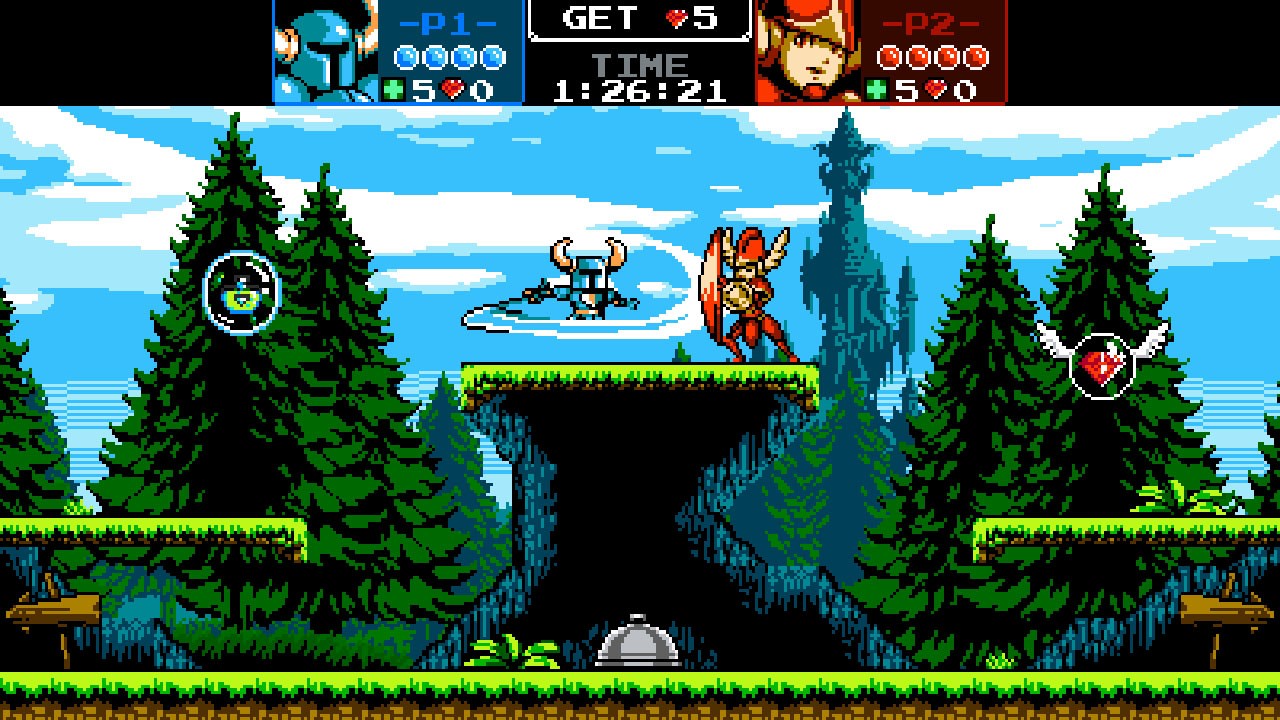 The saga that is Shovel Knight has been a wild ride from start to almost finish. Starting as an innocuous but promising Kickstarter campaign, the crew of Yacht Club Games has been given a golden ticket for whatever they decide to do in the future thanks to their quality and dedication with their product. Those of us who were lucky enough to get in on the ground floor have found Shovel Knight to be an expansive and wonderful game, adding new, unique campaigns that explores the world of Shovel Knight, Shield Knight and the Order of No Quarter. Now it seems that the journey we originally started has nearly come to a close, with the last slated DLC being released as expansions for the Treasure Trove edition and standalone software. To wrap up the epic, let’s take a look at the newest (and possibly strangest) addition to the pantheon, with Shovel Knight Showdown.

People who might feel like the concept of Showdown feels a little familiar aren’t entirely wrong. If you owned the 3DS version of Shovel Knight, you may have had a chance to try the StreetPass arena, in which you were able to go toe-to-toe against another player in either a mini melee or a gem-snatching game which tested a lot of things. I don’t know about anyone else, but I was the sole person in my area to have a 3DS for a long, long time, and I was definitely the only person to have Shovel Knight until…well, until current.  When I visited some family a couple of years back for the holidays, one of my nephews had the game and we gave the process a whirl. It was entertaining and surprisingly well showcased, proving that the little things in life can be enjoyable, but in limited doses. It only took us a couple of rounds before we both concluded the fun had run its course, and we went back to blacking out on turkey and Stovetop stuffing. For better or worse, the 3DS (along with the Vita) aren’t getting the Showdown update due to multiplayer logistics, so, sadly, this catchall review will be leaving the two core handheld systems out in the cold.

There is, technically, a story mode for Shovel Knight Showdown, but the story in there is one that you’ve probably heard multiple times in other fighting games (I know this isn’t really a fighting game, but stick with me on this one). The Tower of Fate is our centerpiece, and Specter Knight and his anger at The Enchantress are our backdrop. The magicians of the Tower, who always cheer for Specter Knight, make a magical mirror to try and trap the Enchantress, and, surprise, something goes totally wrong. The mirror essentially fragments reality for everyone who’s ever been involved in the series, and now you need to fight your way to the Tower and confront the twisted magic to put things right once and for all. Of course, you’ll fight “friends” as well as foes, but you’ve at least convinced yourself that these are just dark reflections of the people whom you actually call allies, so you can punch them in the face without really worrying about it. So get ready to slash, stomp, and spell your way to the top of the Tower, and get ready to do it a LOT: Showdown is all about the unlockables. 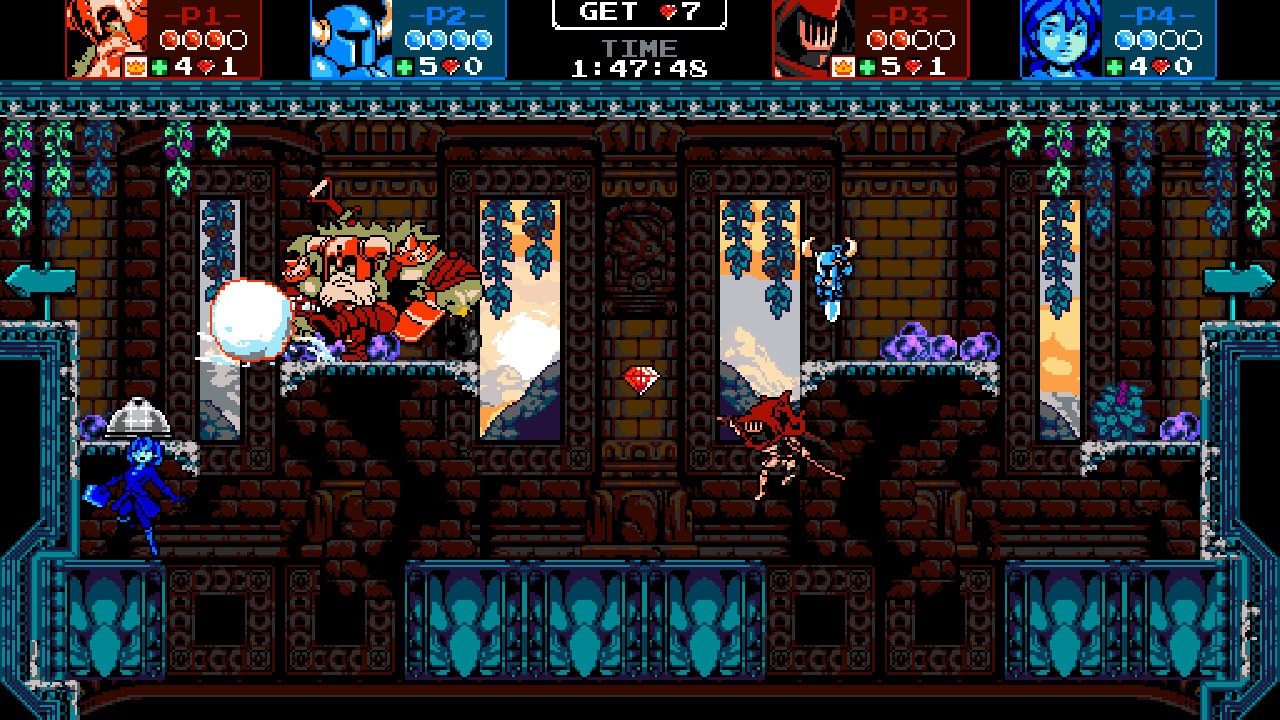 As you make your way through the game (and, indeed, the multiplayer battle mode), the name of the game is combat. You have different ways to approach each of the competitions in both story and battle mode. Sometimes you have to collect a certain number of gems, which appear randomly around the screen. Sometimes you have to collect gems, but you’re also a fairy thing that moves terribly and is my least favorite game mode of any game ever. And, sometimes, you just beat the hell out of each other and see who is the last person standing. Showdown has many variants of the gem collecting mode, but I appreciate that they add enough variety to keep it interesting. I did especially like the “Birdy” mode where you’re collecting the gems, but also flinging a massive number of powerful bird projectiles around the stage, making everything total chaos in four player mode and causing nearly every match to go into sudden death.

Combat for Showdown is pretty simplistic in theory and complex in practice, which is sort of the same thematic for Shovel Knight itself. You won’t be doing killer combos to throw fireballs or perform fatalities here, but there’s enough mixed styles in the characters themselves that players will definitely gravitate towards favorites. Shield Knight has a crazy amount of flexibility with her boomerang shield and powerful punches in between. Polar Knight is simply massive and can dominate with a good reach as long as you allocate for the slowness of his moves. And both Enchantress and Specter Knight can fly, to a certain degree, which negates the caveats of disappearing platforms and the especially frustrating drop deaths, which accounted for a majority of my deaths in the story mode. You’ll have plenty of opportunities to figure out who you like best while you grind out the fights in story mode, on one of three difficulty levels, and try to survive wave after wave of creative gem collecting themes.

What Shovel Knight Showdown does very well is entice players to replay on a variety of fronts. Keeping with the same pixel art, retro aesthetic of the main game, Showdown loads up very quickly and performs buttery smooth, so you can get through your first Story mode play in a matter of 15 minutes (on easy, with your preferred character). Beating story mode with someone unlocks something, usually a new stage. Beating and meeting certain conditions (finish with Shield Knight) unlocks a new character. Winning a multiplayer Battle mode unlocks a new level. Beating story mode on hard with anyone unlocks stuff. There’s an achievement list built into the main menu that tells you, straight up, what you need to do to unlock more things, and there are so, so many characters and stages to unlock. If you’ve enjoyed Shovel Knight this far, you’ll definitely find something to love as you work on getting the full 100% completion of finding all the hidden secret unlocks and fully getting the sixteen characters that are potentially available; each uniquely different in handling and attack patterns, but nothing so drastically different that it departs from the game itself. 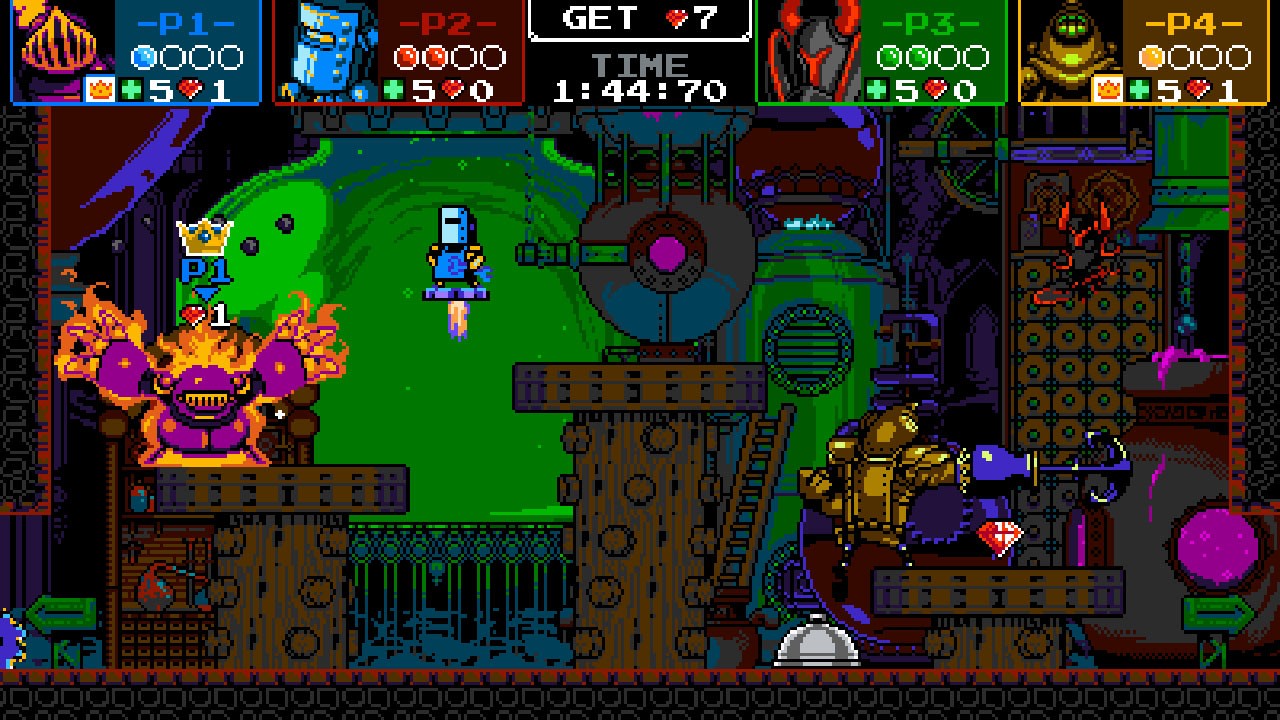 On the same swing, though, Showdown might be a hard sell as a standalone title. If you own the Treasure Trove, which most Shovel Knight enthusiasts have done as soon as it was available, you don’t need to worry about getting this: it’ll be free when the update is officially released in a couple of days. If you’re buying it fresh with having either only gotten one flavor of Shovel Knight (which is an insane concept I can’t comprehend) or getting Showdown solo on a new console, then you might be a bit disappointed in terms of delivery. While the core ideas of Shovel Knight’s presentation are the same – great pixel art, killer chiptune music (including some brand new tracks!) and solid retro handling – the “solo” play is a grand departure from the core games. One thing that was always great about the Shovel Knight DLCs is that it kept the central idea of sidescrolling adventure the same while incorporating in different play styles with the different knights. Here, you have the maximum variety of knights, but the minimum amount of gameplay since it ideally works best with multiplayers or wailing on bots. Let’s make it clear that this doesn’t mean it’s a bad experience in any capacity: it’s wonderful and a lot of fun. But it’s not a solid representation of what the other Shovel Knight journeys are like, and it could be off putting to newcomers or people who aren’t totally thrilled with such activities.

Then again, Shovel Knight Showdown is like being the least talented Beatle. Stacked next to your immediate comrades, you might feel inferior, but you only need to walk outside the studio and hear the screams to remember that you’re still awesome. Shovel Knight Showdown is a ton of fun, and shows a potential for Yacht Club Games to continue to make more titles in the future that go beyond the same formula they’ve perfected. If you’ve already gotten the Treasure Trove, be ready for a great addition to the collection and something that you’ll definitely want to grind out with friends or alone in the coming weeks. If you want to pick this up solo, just make sure that you’ve got your expectations tempered and have a couple of friends on hand to brutalize with a shovel. It’s my 9th birthday all over again!

The unlikely phenom continues to entrance players around the world with a strange but satisfying new foray into the world of 2D multiplayer brawling.