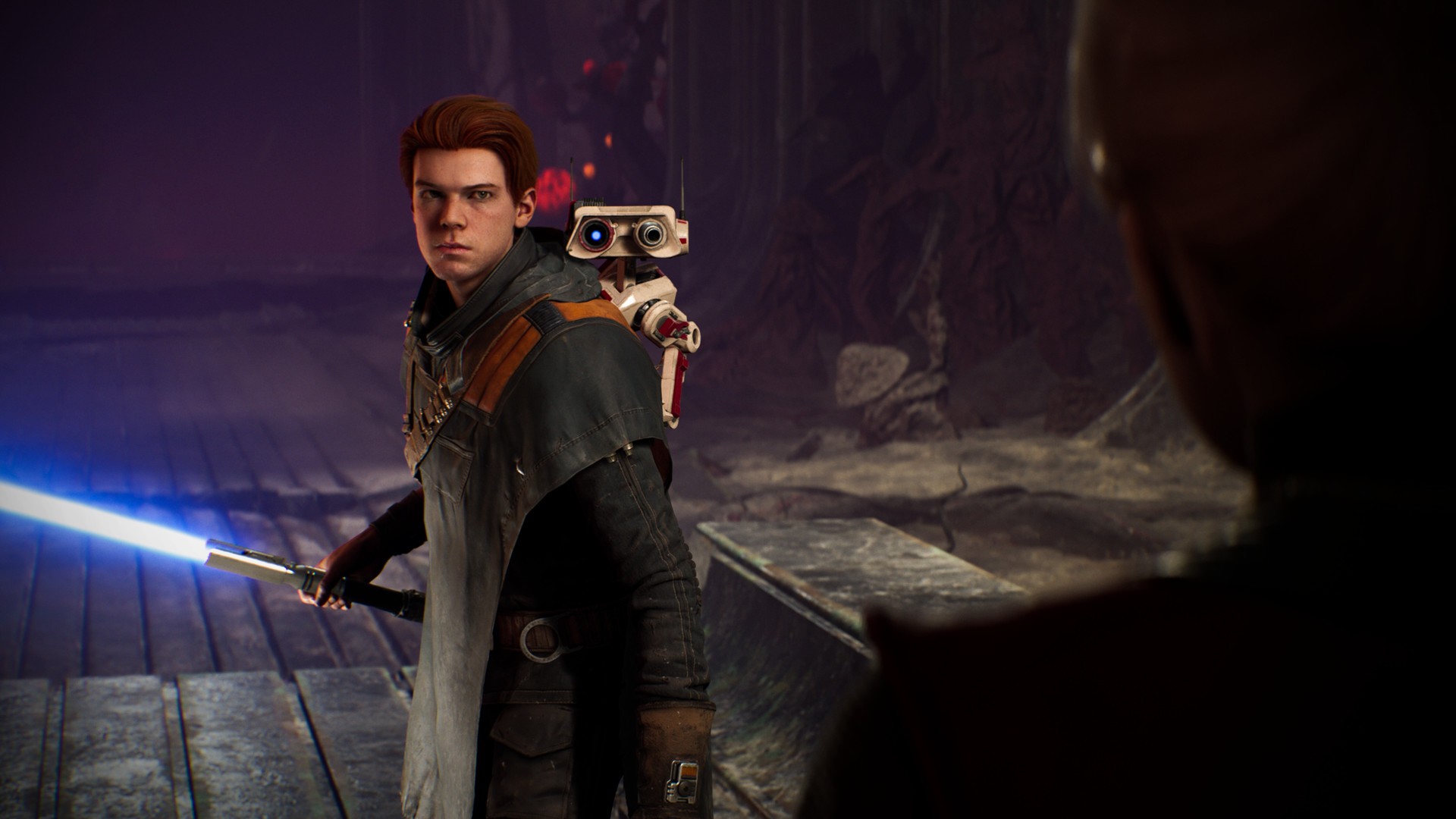 Here’s a question for you. What franchise, within the history of video gaming as a whole, has seen the largest number of titles released? It’s a tricky one isn’t it and I’d bet my last dollar that everyone has a different answer. I haven’t looked up the answer, or even know if there is one, but I’d hazard a guess that the front runners would have to be flagship characters such as Mario or Sonic, or annual updates such as Madden or Fifa. In my personal opinion though, I reckon the answer has to be Star Wars, spawning a variety of games from the old arcades of the eighties up to the present generation of consoles and do you know what? I reckon I’m right. Anyway, the latest of such games to be released in a galaxy far, far away comes in the form of Star Wars Jedi: Fallen Order as it light-speeds a release on the Xbox One.

Developed by Respawn Games and published through EA, this latest outing within the Outer Rim comes as something a little different from what we usually expect from a game within its franchise. Instead of focusing on key battles or events from the saga, this latest release tells a new story, one that is based between Episodes III and IV and centres around the events that follow the collapse of the Jedi Order. It brings together a series of genres, with the exploration of Uncharted or Assassin’s Creed, mixed with the combat of Dark Souls, all within a semi opened-world that spans across the entire galaxy.

Primarily a third-person action adventure, you play the role of Cal Kestis, a once Jedi apprentice who now hides his identity since the execution of the Emperor’s Order 66. Residing amongst the scrap metal of the, now defunct, Separatist and Republic capital ships within an Imperial breakers yard, Cal has kept his identity a secret until one day, his work colleague and friend finds himself in mortal danger following an accident and Cal uses his powers of the force to save him. With his affinity with the force now out in the open, Cal is forced to go on the run after the Imperial Empire begin a hunt to chase down the Jedi fugitive. 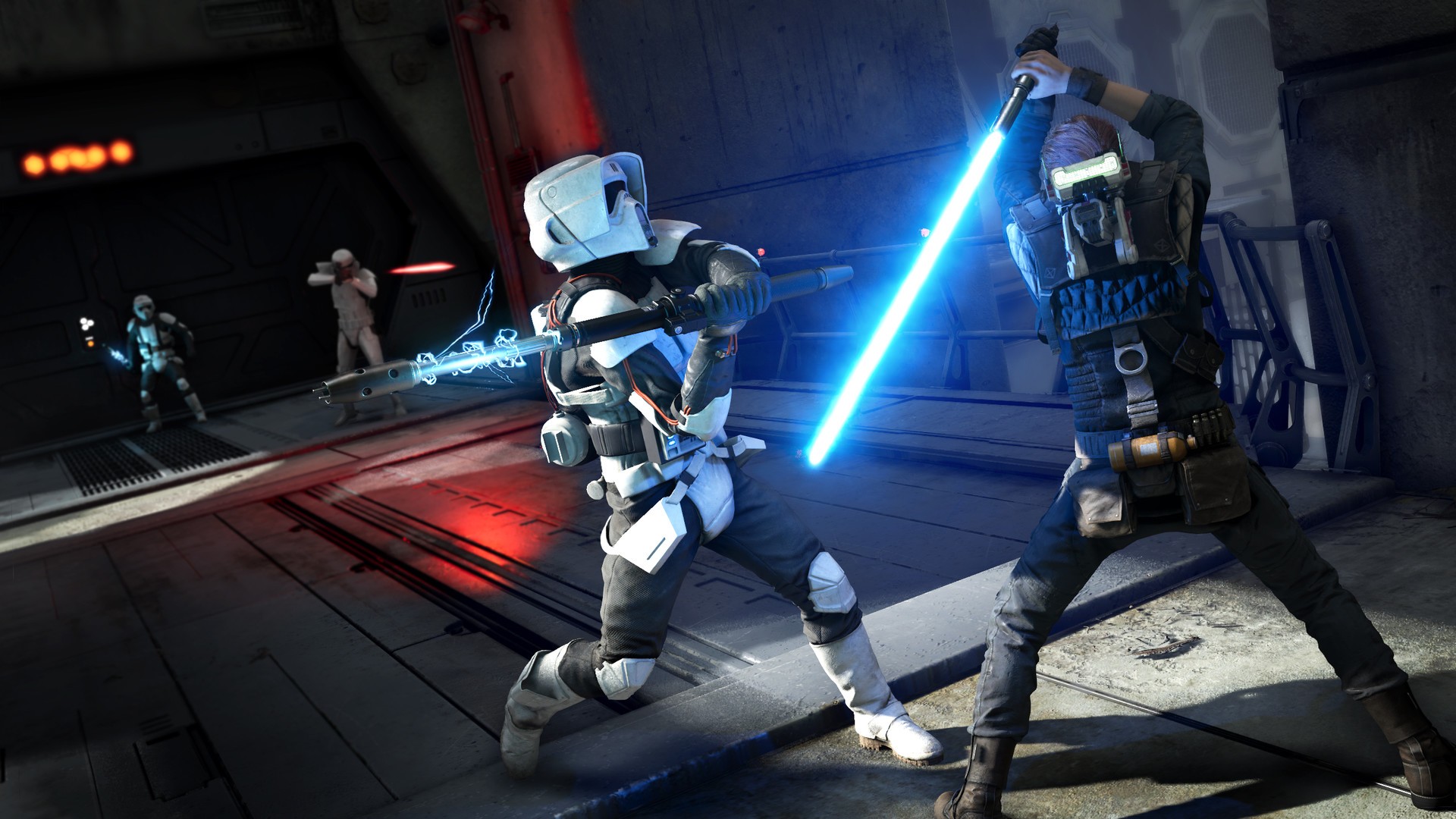 Led by the sinister Inquisitor, The Second Sister, the Imperials pursue Cal into a corner, where with the help of two allies, Cere Junda and Greez, both of whom share a common enemy and a common cause with Cal, escapes capture and flees aboard The Mantis. From here, the story opens up to one that involves finding other Jedi who, like Cal, remain hidden and attempt to lay the foundations on rebuilding the Jedi Order to combat the threat of the fledgling Imperial Empire. In a semi, open-world environment you choose your destinations from a series of planets that bare the familiarity of Kashyyyk to other, exclusive, planetary systems that are new to the Star Wars franchise.

Once on the surface, you explore the regions, seeking out relics of the ancient order. Each locale has an open-world and linear pathway to them; often revealing pathways and shortcuts that need to be revisited in order to gain access to other areas. This comes in the form of rebuilding your knowledge of the force, either through skill point upgrades on a tree of abilities, or through flashbacks of your Jedi training to remember specific moves and skills. Exploration takes on a very Uncharted or Assassin’s Creed feel, as you climb vines, swing across chasms, slide down zip-lines and wall-run specific areas. It has a nice feel to it, making you feel like a true developing Jedi. However, the real powers of its force lies within the very satisfying Souls-like combat with your lightsaber.

Although the whole premise of ‘Souls-like’ may be off-putting to some players, it’s a far more forgiving concept than Dark Souls; at least on the easier difficulty settings (It’s actually quite brutal on the highest settings). You can simply hack-and-slash certain enemies, but larger enemy types and boss encounters requires a far more, skilled approach through dodging, blocking, using the force and timing your blows at the critical moments. The way the combat is presented offers a very satisfying experience that truly makes you feel like a Jedi master; but only when you have learnt the intricacies of its style. Blocking strikes, deflecting laser fire, pushing enemies or slowing them down, before unleashing a variety of moves is incredibly accurate here; presenting what is, in my opinion, the best representation of lightsaber duelling ever presented in a video game format. Honestly, it’s that good that you’ll never look at another Star Wars game in quite the same way.

The whole presentation of the game really makes you feel a part of the whole Star Wars universe; although I must admit I was initially disappointed not to be greeted with the main theme fanfare when I first started up the game. However, throughout the game, you are constantly reminded of the world in which you are playing, with many references to the prequels that precede your story and a developing arc towards the original trilogy. Even the user interface has been implemented in such a way that you use your utterly charming droid, BD-1 to present a holographic image of your surroundings, detailing your objective, pathways, areas to be explored and doorways yet to be opened. It’s truly epic and truly Star Wars in every possible way. 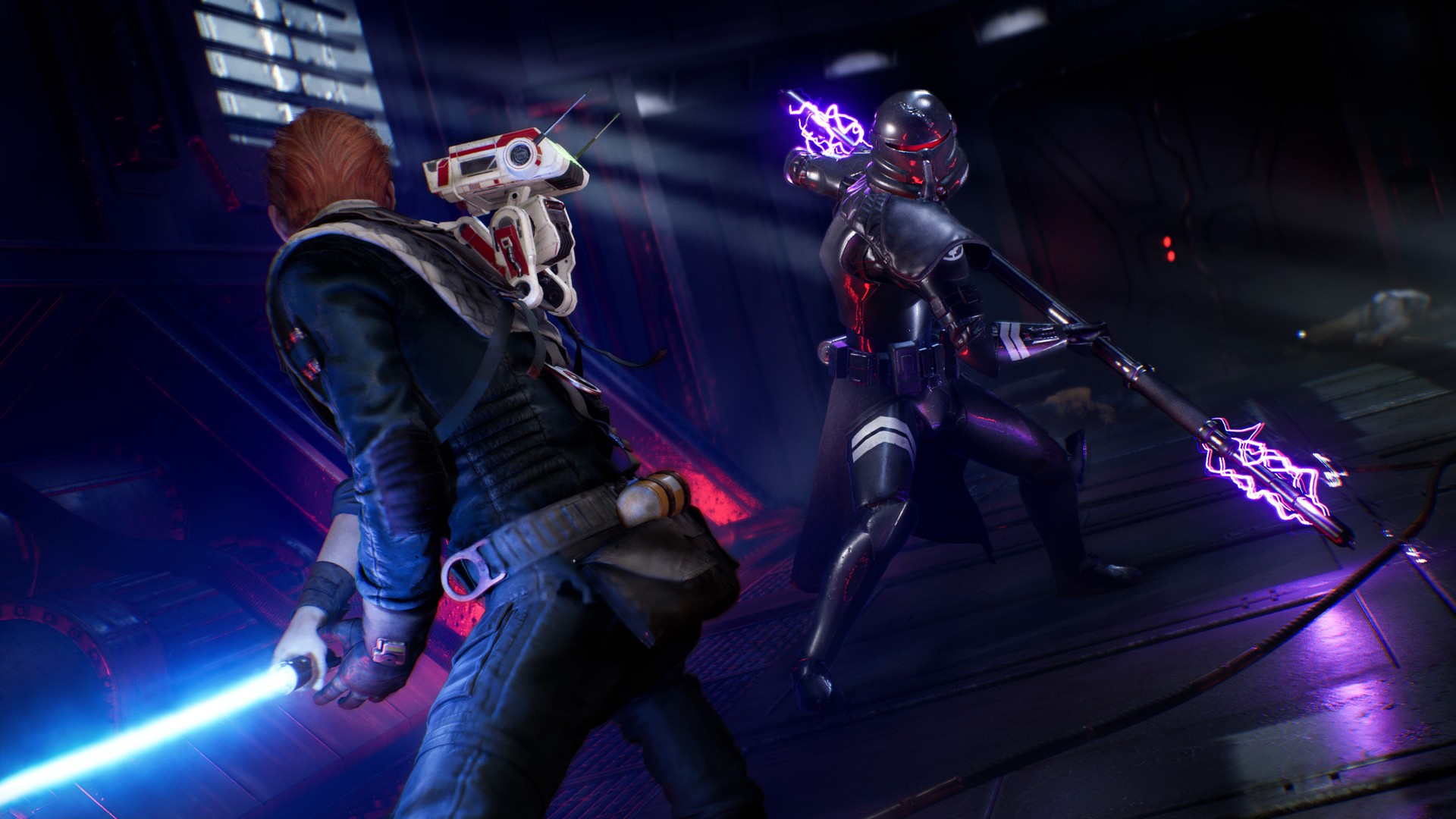 Throughout its twenty to thirty hour campaign, you’ll come across a number of locales, characters, enemy types and even fauna; all of which can be collected or scanned in order to build up an encyclopaedia of the world around you. It’s certainly one for the collectors out there and even the achievement hunters, producing a level of play that truly invests you and makes you want to explore every single nook, cranny and region available to you. The developers have paid real attention to every level of detail within the game, even down to simply holding your lightsaber aloft in order to light up your surroundings and that satisfying hum of your neon-bladed weapon never fails to grow old. You can even customise your experience by outfitting Cal, BD-1 and The Mantis, and best of all, completely build your own lightsaber within every component from blade colour to style of hilt. It’s every Star Wars fans’ dream.

Despite its enthralling story line, exciting worlds and exhilarating combat, the game does unfortunately come with a series of rough edges, from some suspect animations, lip-sync miscues and texture pops. I never encountered any game-breaking bugs though and I’m pretty sure that the game will be supported with a series of patches to iron-out all of its shortfalls. Despite this though, it never broke my immersion of being within the Star Wars galaxy and it’s in this respect that Fallen Order presents itself as one of the best games that the franchise has ever seen.

Overall, Star Wars Jedi: Fallen Order is one of the most satisfying Star Wars games ever to have been produced; especially if, like me, you’re a lifelong fan of the whole universe that surrounds it. Its mix of genres brings something new to the whole Star Wars setup and produces a game that might not necessarily have been what you expected. It contains so much to lure you in, from constant reminders of the lore around its story, to a style of lightsaber duelling that is simply incredible. Honestly, it really makes you feel as one with the force. If you enjoy games such as Uncharted and Assassin’s Creed and you love Star Wars, then this is simply a game that, in the words of Darth Vader himself, is simply ‘impressive’.

Star Wars Jedi: Fallen Order is, as in the words of Darth Vader himself, simply ‘impressive’.