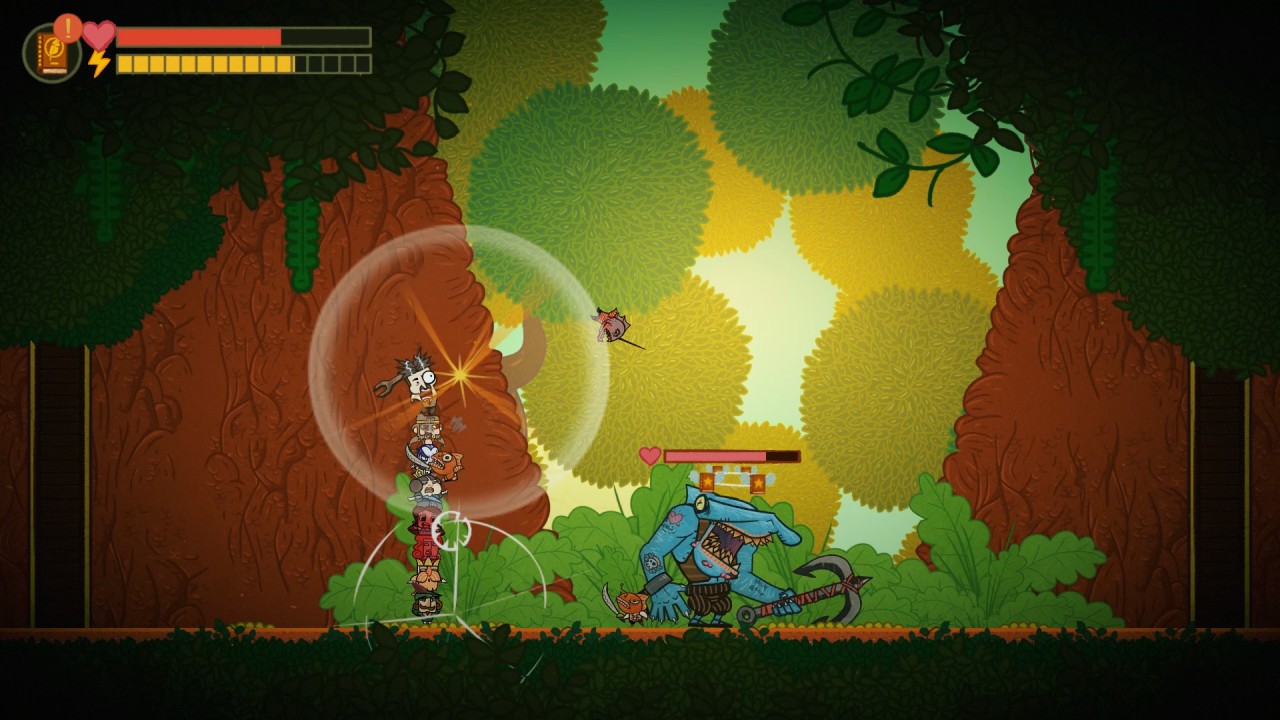 There’s nothing quite like the classics, is there? All of the great characters and literary masters of times before time will be held in reverence, respect and entertainment for decades after we shuffle off this mortal coil and my reviews ultimately are lost to the sands of time. Or, more likely, the giant electromagnetic pulse that’ll destroy all digital life and crush our carefully maintained archives. In any case, Digital Tales had a great idea when they decided to take several familiar faces – Dorothy Gale, King Arthur and Dracula, to name a few – and smash them together into a fascinating world of books come to life. Why not sew together all these historic and fictitious mammoths and bind them in a world of metrovania exploration, clever group utilization and never-ending banter that switches between genuinely funny and eye rolling, but still tolerable? In theory, Bookbound Brigade could have become one of my favorite titles of the year already, but the game suffers from too many irons in the fire and not enough focus on the core execution of the game itself.

With Bookbound Brigade, we must understand that there is a massive library that contains untold number of tomes throughout the millennia, and, at the center of it all, sits the omnipowerful, all-father of books, the Book of Books (or B.o.B.). Someone has decided to snatch this book and, with it’s removal from the library, it begins to unbind, scattering pages to the wind and, with it, the characters contained therein. Not content to simply sit around and wait for all literary history to vanish into nothing, eight members of the written world (five, initially, but three more add quite quickly) decide to band together to go and find the book, restoring it to the rightful place and protecting a future of words and ideas. However, along the way, many of their fellow characters have been displaced, and would like to be returned to their home, along with some various artefacts and ideas they’ve lost. It’s a huge exploration with a lot of fetching mixed in between, and the Brigade is ready to take on the whole world! 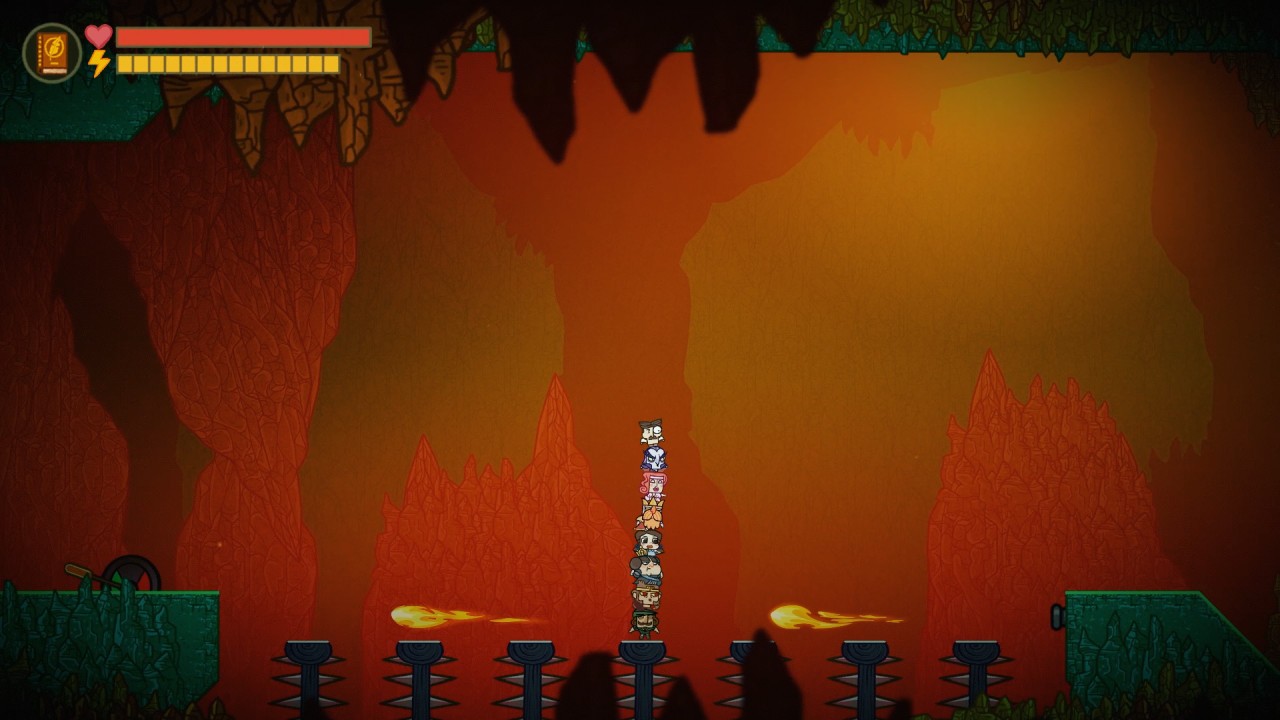 As a metrovania style of game, you already know that Bookbound Brigade isn’t going to be a straightforward course, and, indeed, it is not. From the start, you can already see locations that you want to double back and revisit at a later time when certain skills are unlocked. One of the first you get is the coveted double jump (thanks to Dracula), so things don’t exactly move slowly in terms of rolling out additional options and iterations of your power. You pick up Queen Victoria, your sixth member, well within the first half hour of the game, and you begin to understand the importance of formations and skills before the forty five minute marker. You see, as you travel in a pack, it becomes necessary to call upon the skills and abilities of each of your different Brigade fellows, but, also, how you can all work together. Normally travelling in a hodgepodge of a cluster, you soon learn to stack yourself vertically, hide beneath a phalanx of shields, and so much more. These learned abilities really present themselves well, and you are compelled to try and figure out where they all go.

The controls are simple enough to understand, but it does take a bit to map things out in your mind, especially as you pick up more and more abilities. For example, one of the first bosses is seemingly impossible to beat unless you properly use the vertical stacking formation, because it allows you to launch minor enemies at bigger enemies (with some coordination and calibration at work). But being in a totem pole of people doesn’t exactly make for the best speed or agility, so you need to toggle in and out of these guise fast while actively avoiding being stomped, speared or smashed to death by a large pirate. Even just remembering which combination of L+button was needed here was confusing, and it only gets moreso. Digital Tales did a good job of making sure you don’t leave any of your skills by the wayside as you move forward, but, in doing so, also tasks you with remembering, sometimes at a moment’s notice, the how and why of doing a large number of acrobatic setups.

The Bookbound Brigade has a good amount of banter amongst themselves and with other characters, though, perhaps understandably, they appear to mock a good deal of the people they encounter, and it has a differing effect depending on whom. Making fun of Don Quixote for his fascination with the windmills, alright, no problem, that tracks. Joan of Arc, however, was a real person, and constantly making fun of her for being burned at the stake seems, well, a tad ghoulish, even if she was declared a martyr. Most of the infighting is within the Bridge itself, and thinking about Nikola Tesla getting into a shouting match with Sun Wukong (the monkey hero of Saiyuki) is funny, even if it’s bizarre. Most of the writing and most of the interactions ultimately boil down to all the characters being stressed and upset at the unravelling of their worlds, and then biting themselves in the butt with their words and actions. Formulaic, but undeniably funny when done correctly. 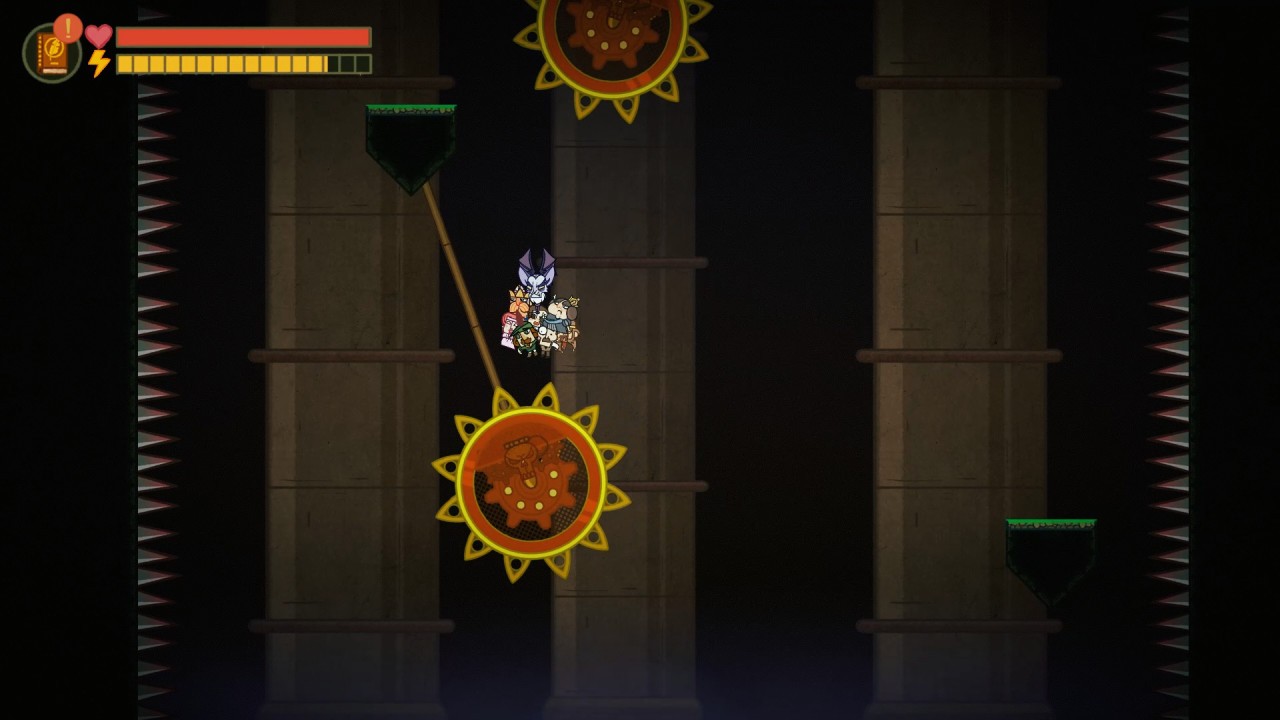 The downfall of the Bookbound Brigade comes in a twofold, with the first being more of a Switch thing than anything else. First, it doesn’t feel wonderfully optimized for the console, which could hopefully be patched out in the near future. There’s a bit of stuttering when the game first begins, and the hiccups occasionally crop up at inopportune times. Most of the traps and pitfalls of the game do a minimal amount of damage but also reset you back to the last “safe” spot you were standing on before the incident occured. The result is having to redo something that should be simple a couple of times because the game chose that moment to lag, and it can be rather infuriating. It wasn’t constant, so it’s not a significantly bigger problem, but people shouldn’t be able to notice it so clearly when playing in handheld mode.

The second and more glaring issue is that there’s an imbalance between some gameplay and some exploration. In order to really move forward, you must traverse different realms (worlds) in Bookbound Brigade, The Library World acts as the hub, and you must move through a large number of corridors and doorways in order to get to a specific spot to teleport to a specific point in another world. With minor load screens between areas, plus a lot of repetitious scenery (it’s a library, after all) your brain goes a little numb and you end up wondering if you’re walking the right way. Plus, at the beginning, you don’t have many NPCs rescued to act as sign posts, so mapping things out in your mind is a bit of a task (thank goodness for the popup map that’s available from the very start!). Additionally, I rarely felt well rewarded from helping out the NPCS with their lost armour or lost lance or lost dignity or whatever. I got more stuff, which technically helped unlock more skills, but I got the feeling that the skills unlocked precisely when the developers wanted them to appear and not because I ground a ton of items from broken crates and fetch quests. It’s important for 100% completion of the game, but, mostly, you can move forward and just do your best focusing on rescue and the main characters you have.

Bookbound Brigade is interesting, and it’s charming in the right ways. The concept is novel, the controls are good, and it’s an execution of metrovania I haven’t seen before. I think I would have liked the option to save more frequently, but that’s a personal prerogative more than anything else. I don’t hate the price point, and think that it could be a fine addition to anyone’s library whose interested in a bit of quirk and sass with their gameplay. Really hoping we can smooth out some of the bumps with QOL patches, but, overall, it’s a fine time.

It’s a game where King Arthur argues with Dracula about who is the better leader, and the answer is neither of them.