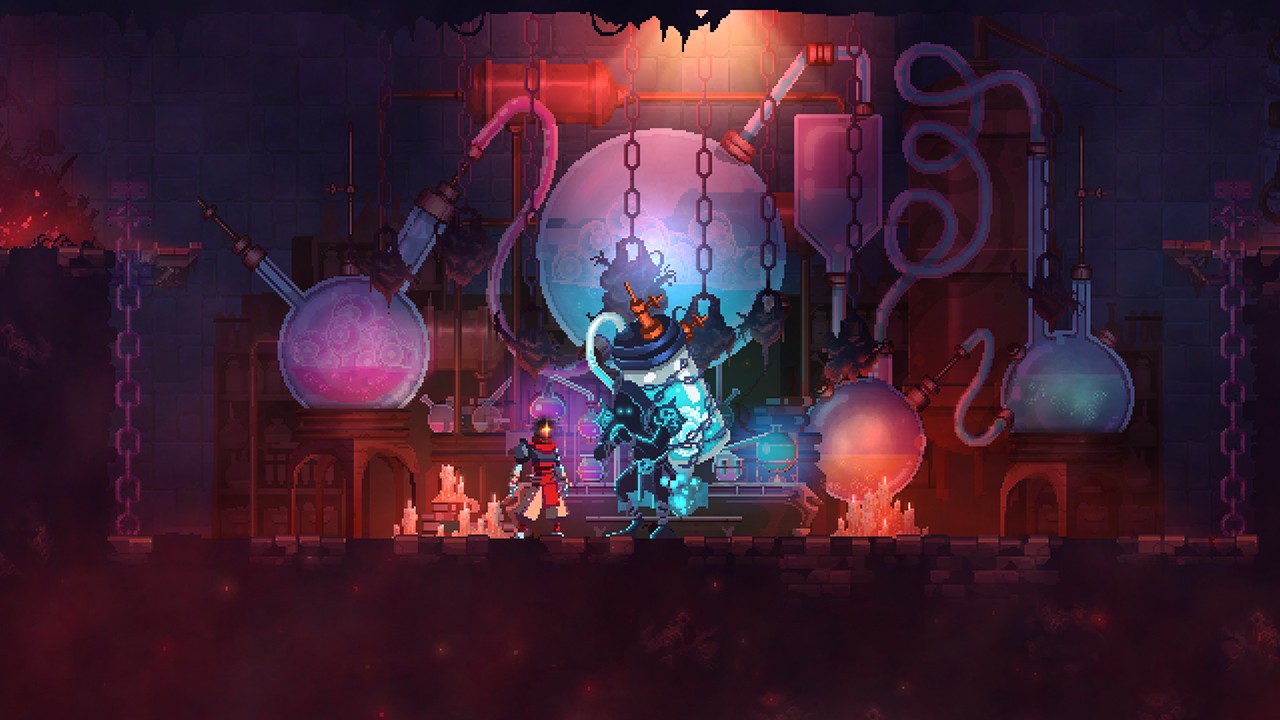 Dead Cells has been a game I’ve been eyeballing since it first launched on the Switch about a year and a half ago. At that time, the Switch was still feeling out its fanbase, but I already saw a massive appeal for roguelite/roguelike players. So to hear about something that was touted as a roguelike metrovania game intrigued me, but I had already found a great home with A Robot Named Fight. When I didn’t review it initially, despite all the hype and the raving fanbase, I let it go and just sort of watched. I saw the game growing bigger and bigger, with patch after patch. When I heard that the first DLC, Rise of the Giant, was to be free for everyone, I was shocked: all this for a game from some studio I had never heard of before? But Motion Twin (and Evil Empire) kept the momentum building and going, patching and repatching the game with a fervor similar to another game I loved, 20XX. Then, finally, the moment had arrived: the first paid DLC for Dead Cells, entitled The Bad Seed. It was a sign of quality, of knowing there was enough new content and ideas to ask for players to contribute a bit back to Motion Twin after everything the game had given to the community. I pounced. I needed to know what all the fuss was about.

And now I understand everything.

Dead Cells puts you in the role of a character known only as The Beheaded. You’re some kind of parasitic, necromancing energy that takes over a discarded corpse inside of a prison cell. The folk around you seem very, very unsurprised that you’re up and about, as though this has happened many times before. Like Furi, your only choice is to fight your way out of your jail (though your first fights are far, far easier) as you explore the land where you’ve spawned. There are terms and ideas being thrown around everywhere. There’s something called The Malaise, an infection that’s run rampant where you are, and an entity called The Alchemist is searching for a cure. There are mutated, twisted beings everywhere, and they all seek to stop your revival and your quest for the truth. The story, frankly, is incredibly convoluted, told through snippets of found documents; short, ominous phrases between areas; vague and mysterious warnings from NPCs; and your own inferences from corpses and abandoned artifacts. There’s a deep and complex lore to Dead Cells that fans have attempted to piece together, and you’re welcome to try yourself. 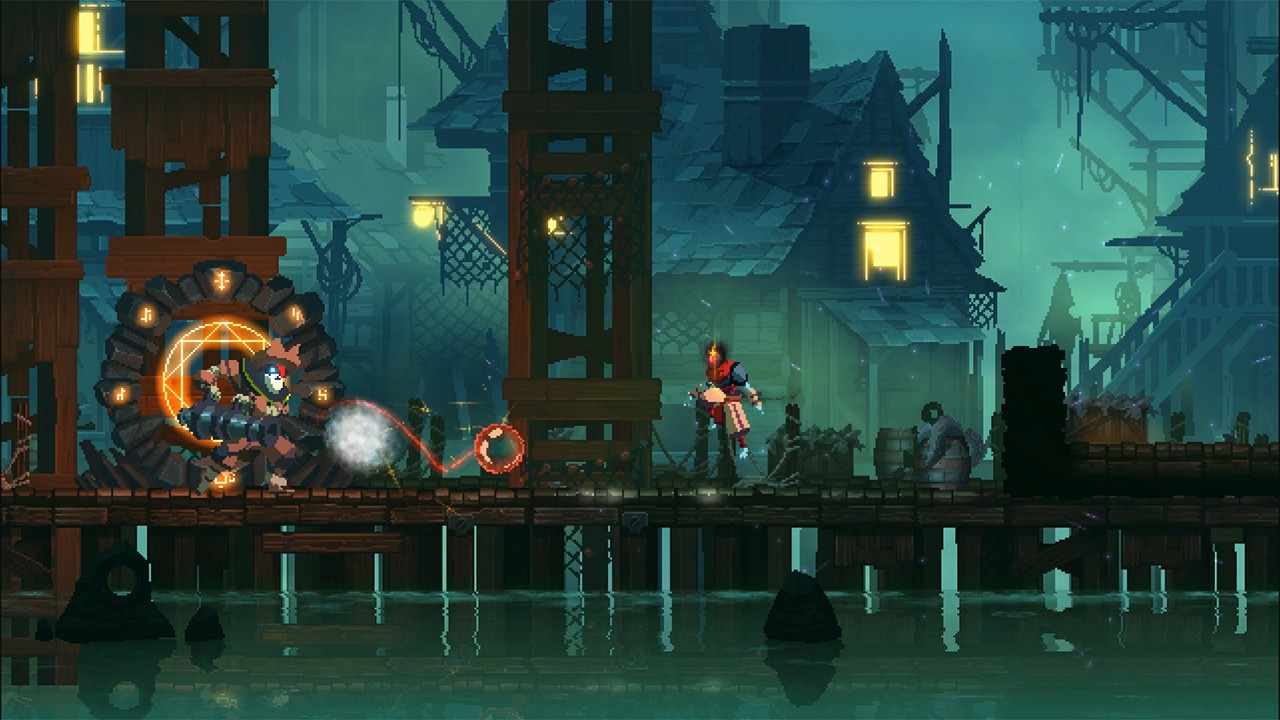 As mentioned above, Dead Cells is a metrovania game in a very true and honest fashion, though the procedural generation isn’t as intricate as you might think. As you progress through the game, you discover two types of aids: temporary and permanent. While the temporary are everywhere and incredibly diverse (more on that in a second), a handful of permanent upgrades, called Runes, allow the Beheaded to access new areas and try new abilities. Things like summoning creeping vines to reach new areas, teleport between idol statues, and even open unassuming doors make for future runs to be more exciting and more challenging. That’s something that I loved about Dead Cells right away: the game never generates a route that seems impossible or insurmountable. Whereas you can easily have a bad roll and end up in a no win situation with some of my favorite twin stick roguelikes, Dead Cells always finds a way to give you upward motion, especially because the Beheaded has so many damn choices once the ball gets rolling.

In the realm of temporary upgrades, Dead Cells has you in spades. You’ve got your standard weapons, which come in melee and ranged flavors, not to mention some special variants (the Greed Shield, the Firebrand, the Spartan Sandals) that make combat wicked, wild and unexpected. You also have access to cooldown items, which act as secondary weapons from all different approaches. Throw bombs and light your foes on fire. Create crossbow turrets that whittle down enemy life. Place actual beartraps that immobilize even bosses for a short, lethal moment. Or bet on yourself and inject some kind of drug that makes you temporarily invincible (stay in school, kids!) while you beat the hell out of the one dude with a set of flaming daggers. And that’s just the weapons. You also can end up with higher levels of weapons that are enchanted with different effects (either found, bought or upgraded) and you can instil yourself with a set of mutations that add different effects to your run. Regenerate health by killing enemies or parrying their attacks. Increase your DPS through successful kill chains. Heck, forsake food and increase your own infection (which can seriously hamper your life the further you play) and increase your health by half. This isn’t even including the fact that you can find scrolls that increase your three base stats (brutality, tactics and survival), and you gotta play this color game to see which is most important for you as you go and if you want that extra 10% added to your giant hammer attack OR if you’d prefer 23% more health and a better reach on your magnet grenades.

All the fancy items and exciting character sheets don’t matter a lick if the core gameplay is bad, and Dead Cells is so tight that you can bounce a quarter ten feet off the combat turnaround. I often feel that 60fps is a promise or a term thrown around by developers to try and appease PC gamers who came to the console, and it ends up either being disingenuous or flat out wrong. This is one of those rare games where, not only can I see it, I can feel it and it’s importance. Dead Cells looks so vividly smooth with the movement and actions of the Beheaded and his foes that it’s almost unreal to see a game like this performing on the Switch. In all instances of combat, you need to feel like you’re in control, and Motion Twin has delivered this, for fans, in spades. You rush into combat, either by slamming down from above or kicking in the door, quickly rolling past the enemy and unleashing a fury of blows until the enemy dies, dropping precious coins and/or Cells (Cells are the currency to purchase permanent upgrades). Or you have a split second to see the incoming shockwave or leaping attack and decide whether to risk throwing up a shield, attempting a parry or simply running for your life and coming back to fight another day. Dead Cells has a Souls feel to it, where you can quickly go from in control and a kickass killing machine to a schlub who missed a parry and just got beaten to death in a matter of blinks. As you get stronger and you get more familiar, you can get cockier with early levels, but don’t get too cool for common sense. After all, your HP resets too, and you’d be surprised how much it hurts to get murdered on the first Biome after putting in 20 hours (I know, many of you have put in more, give me a break). 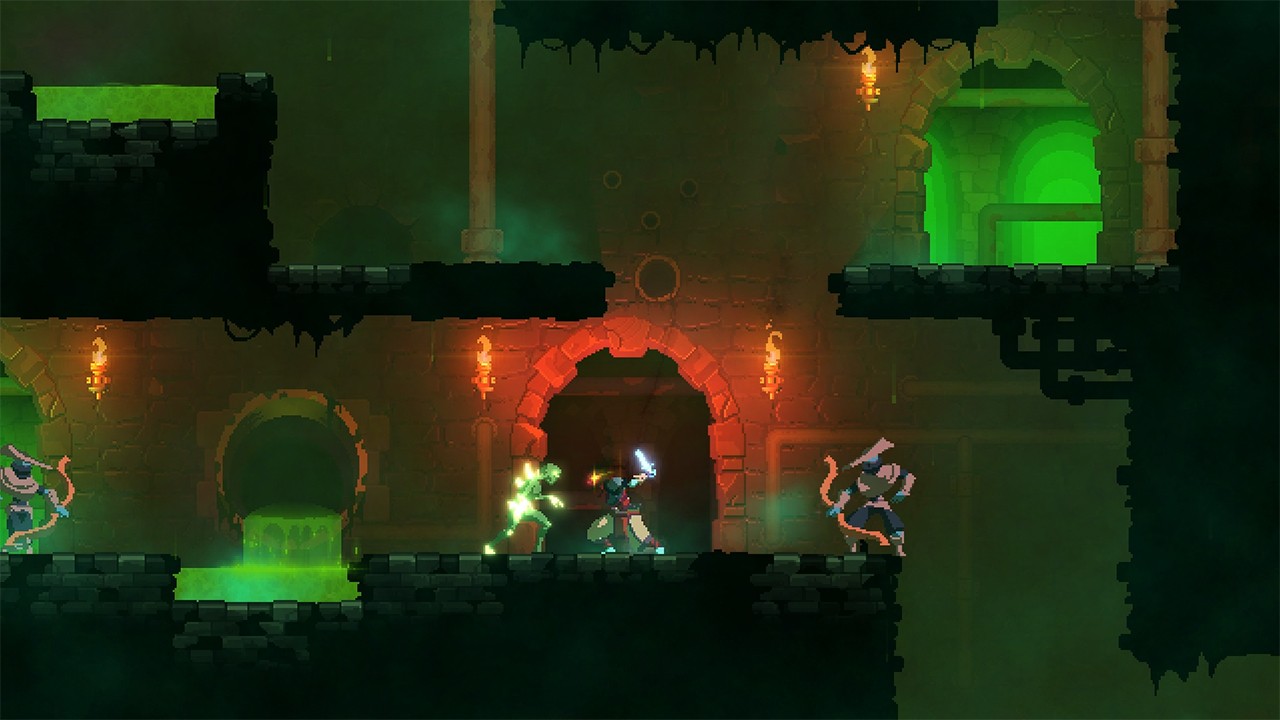 Speaking of Biomes (which is what the different areas of Dead Cells are called), veteran players considering the Bad Seed should know what they’re in for. The Arboretum, which can be accessed straight from the Prisoner’s Quarters, is an exciting and frankly punishing area to reach and explore. A sort of broken, twisted greenhouse, players are going to encounter some brand new plant themed enemies, including my nemesis, the Giant Mushroom Bro. If you aren’t ready for the level of intensity that comes with this area, players should do their best to avoid it until they’re more comfortable and familiar with the game. It’s quite large each and every time, and a great place to pick up Cells and some brand new abilities and weapons. One thing I unlocked was the Mushroom Boi skill, which allows you to summon a mini mushroom to rush at enemies in the same vein that they rushed at you in the Arboretum. It’s a peaky, fun and colorful place to explore, and I always choose this path if I have a choice.

The Swamp (and the heart of the Swamp) is a different sort of beast that feels more cohesive with the rest of the Biomes in Dead Cells. The Arboretum feels like an offshoot, a place where the Malaise has taken a different sort of hold that almost seems positive in comparison to the rest of the world. Sure, it’s twisted and evil, but it’s vibrant and alive. The Swamp is 100% a broken, diseased place that is teeming with angry, violent life that puts it on par with The Village in terms of difficulty and enemy aggression. It took a few times before I was able to get through here, especially because I didn’t experience any boss fights or even elite enemies my first time through the Arboretum (no elites the first time), but the Swamp isn’t nearly as forgiving. If you’ve looked at the Concierge and thought “hey, I’ve fought him successfully a few times, he ain’t no thang” than may I invite you to come and get stomped in a brand new way? The Swamp is the challenge ground for players who want to up their game on their way to the throne room, and it’s worth the side journey if you need to re-instil your power and success as a Beheaded one.

A good roguelite lives and dies on three core principles: a lot of unlocks to achieve, a great amount of gameplay while you’re in the heat, and an indignant irritation to try again after you either die way too soon or way too close to something new. Dead Cells hits these spots with the laser accuracy of an acupuncture assassin. You see the collection of glass jars in your Quarters, filling up with things you unlock, and you marvel at how many more are still empty and what the future could hold. You rejoice and celebrate when you get that level seven amulet that adds unlimited gravitation, a triple jump AND poison explosion when you slam into the ground. You physically, vocally growl at the screen when you die and you watch three scrolls and close to thirty Cells fall out of your corpse, demanding you go back and try again. Then there’s that swagger you feel when you reach the rest area and you can open the bonus door for sixty defeated enemies without taking any damage…that’s the S ranking right there. That’s the release of joy and pleasure from doing your job well and knowing that you were as bad as you wanted to be. No poison damage. No errant projectiles, exploding grubs or spinning spikes took you out. You were a goddamn machine. You’re the Beheaded, and you’re here to collect heads yourself. That is Dead Cells. That is the pleasure of a game well played. And if it does this well on a Switch Lite, I can only imagine this banging soundtrack and gorgeous animation on the big screen. Congratulations, Evil Empire. Well done, Motion Twin: you’ve made a masterpiece.

Dead Cells has officially dethroned the Binding of Isaac as my favorite gaming addiction on my Switch, and that is saying a TON.