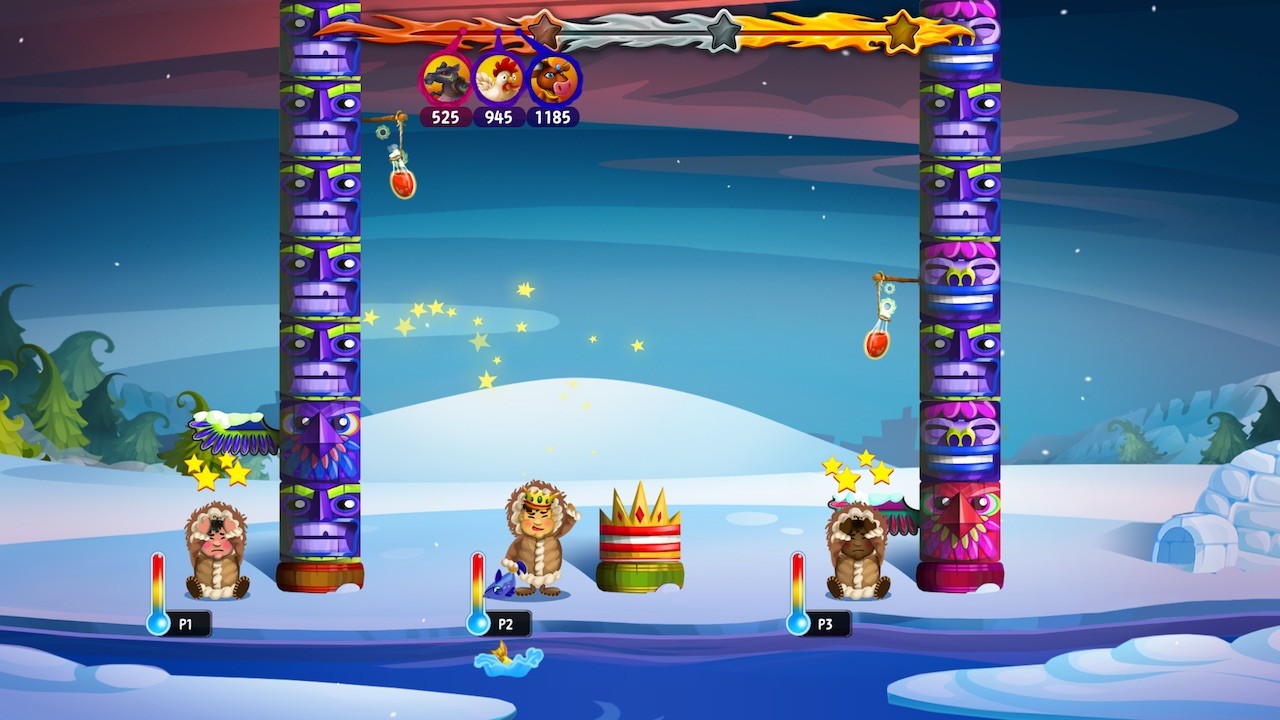 Arcade Islands volume one, was developed in Poland, by Teyon Games, and published by Mastiff. For this review, the version used is on PS4.

‘Have you ever had a sense of deja vu? When you are playing a game? Have you ever felt a bit shortchanged during that sense? Well, have I got a game for you! Arcade Islands volume one (I suppose someone is looking for this to be a franchise) is a collection of 33 games, with varying amounts of fun. The games on Arcade Island, are clones of popular games, like Snake, Space Invaders, Pong, Combat, Zuma, etc…as I grew up “classically trained” on the originals (I had the major consoles from yesterday to today-from the Atari VCS, Sega Master System, Genesis, (mega drive) , Game Gear, NES, Gameboy, SNES, N64, PS1, PSP,  Xbox, Dreamcast, PS2, Xbox 360, PS3, PSvita, PS4, and Xbox One)

Each island has various games, like the ones I mentioned above, which you play to earn stars, based on your performance, up to 3 which is your best score. The game does a decent job of explaining what you must do. Each one has its own set of controls. Because Arcade Islands v1 is an “arcade”, the gameplay is also variable. As you progress, you are both collecting the stars,  both unlocking “treasure” to make your sparse room a bit more lively, as well as unlock the other islands. Do your best, get all of the stars, you progress. 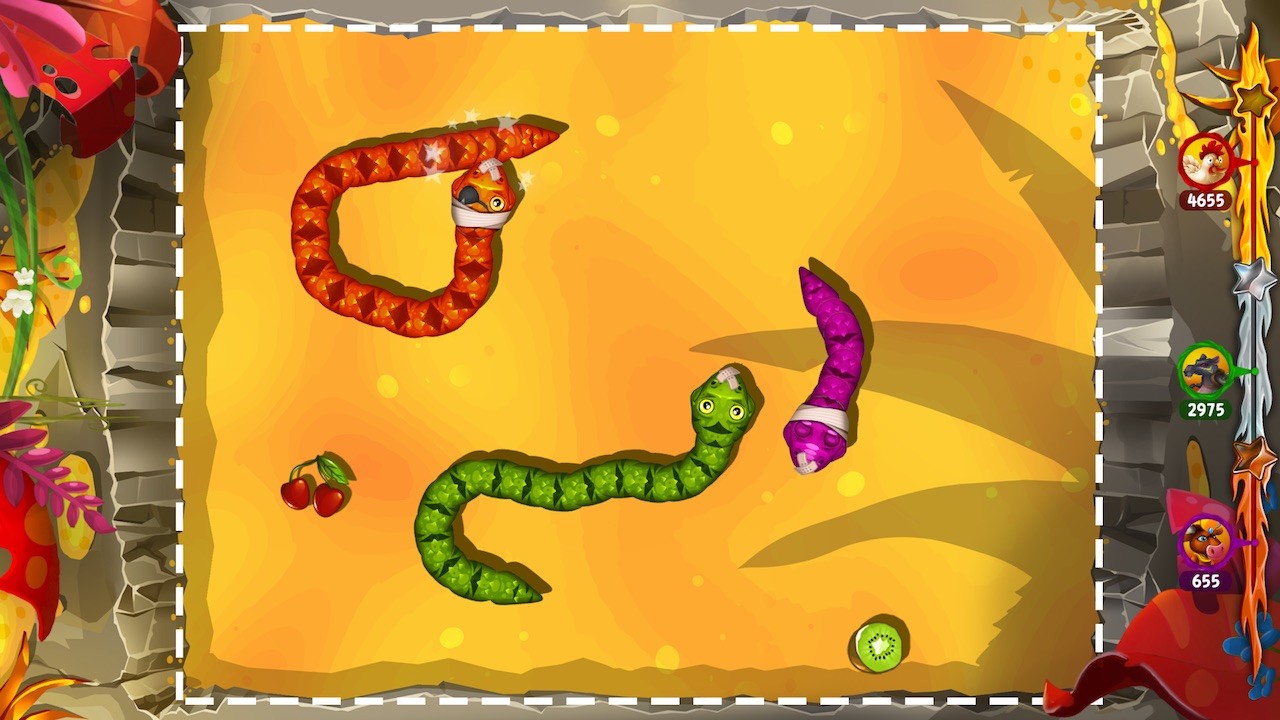 Graphically, the Arcade Islands v1 is colorful enough, but seems more at home on your local cell phone. There are too many influences for it to have a coherent theme, other than being placed on an island. It also seems like that’s where the idea came from, except collecting the various licenses of the real games would’ve been a problem, so there are generic themes like a vegetarian snake game, a side scrolling fruit invaders game, a missile command like pirate ship shooter game, a Zuma like ball shooter puzzle game, pong like ice hockey game, and so on…the music for these games, for me, required a bit of adjustment (to the lowest possible setting). The sound effects are okay, at best, they were going for retro with slightly modern skins. The game has a village folklore aesthetic that is colorful, and family friendly. No blood and gore or language. I approve of that choice…you don’t always need that.

As far as controls, there are very little in the way of complaints, except, they reached way back to the old Atari game tank combat control scheme for the tank game (old enough to remember, because I had it) where you had to slowly rotate the tank then push the tank forward in that direction, not very fast at all. Each of the other games had rules like tree chopping, bear punching, fruit shooting, bug trapping, and other activities. They made this where you can play with up to 4 others, which can hinder your experience in the small “snake” playfield where collision detection is your kryptonite. The directional controls are sensitive enough, so your platformer sections are not floaty, and you can move just quick enough to avoid doom. They did okay with the controls. 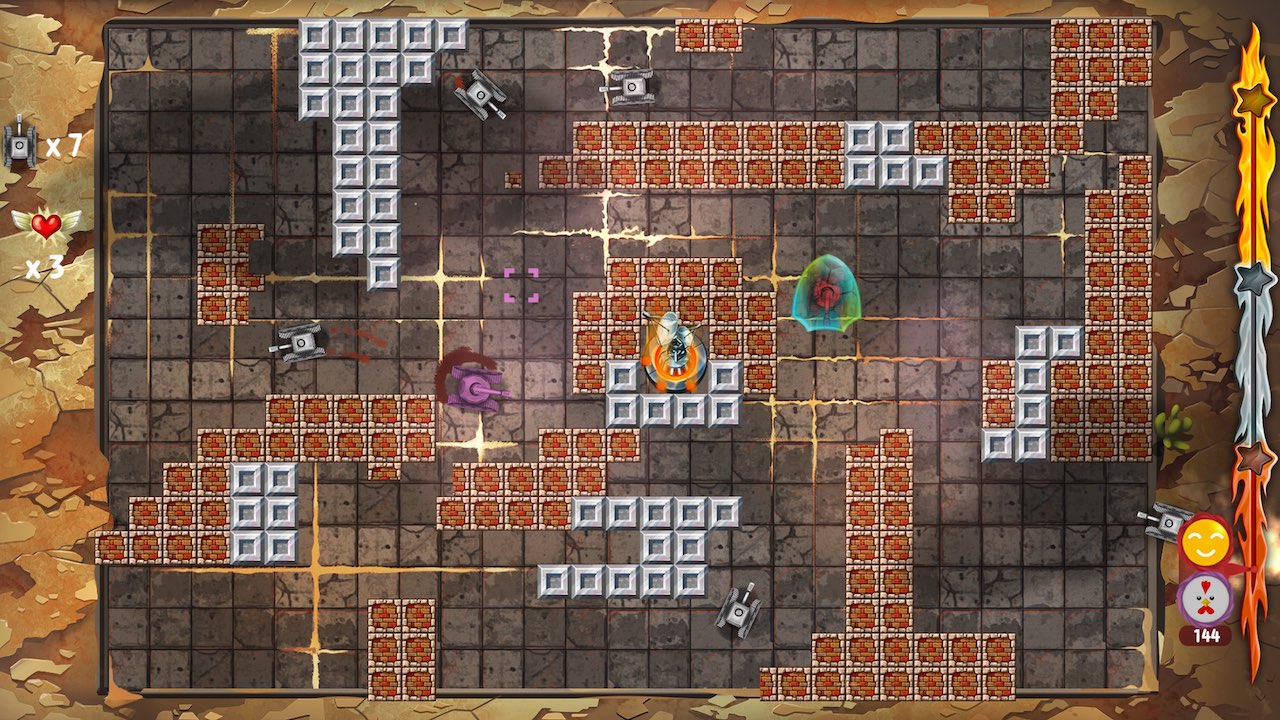 Your performance, in addition to the stars, is measured up against players scores worldwide. So if you’re highly competitive, you may want to keep trying to get your best score. Me personally, I didn’t care to look at scores as much as getting enough stars to open other islands. I did well enough to get 3 stars in most of the games, but the scores I saw were so high for some world players, I thought to myself  “man, they must REALLY like this particular game!” That is okay, the island keeps track of games you play the most, how long you have played everything, and the total time spent overall. That was a good choice. You need to be able to use your time wisely, seeing where all your time is allocated is very responsible, especially when playing this game…

The game, as a whole is a “jack of all trades but master of none”, as an anthology,  the game would’ve been better served having a consistent theme and sticking with it,  like maybe a Viking arcade, where all of the games are specific to that era…The Arcade Islands is short enough for burst distraction, but for sustained fun, I would look elsewhere. If this is to be the tent pole of the franchise, I hope that future iterations go with appropriately themed games for each island instead of the hodgepodge they shoehorned into each one.

A game that will give us a glimpse of ancient gaming memories, and some recent memories, complete with all implied catches…