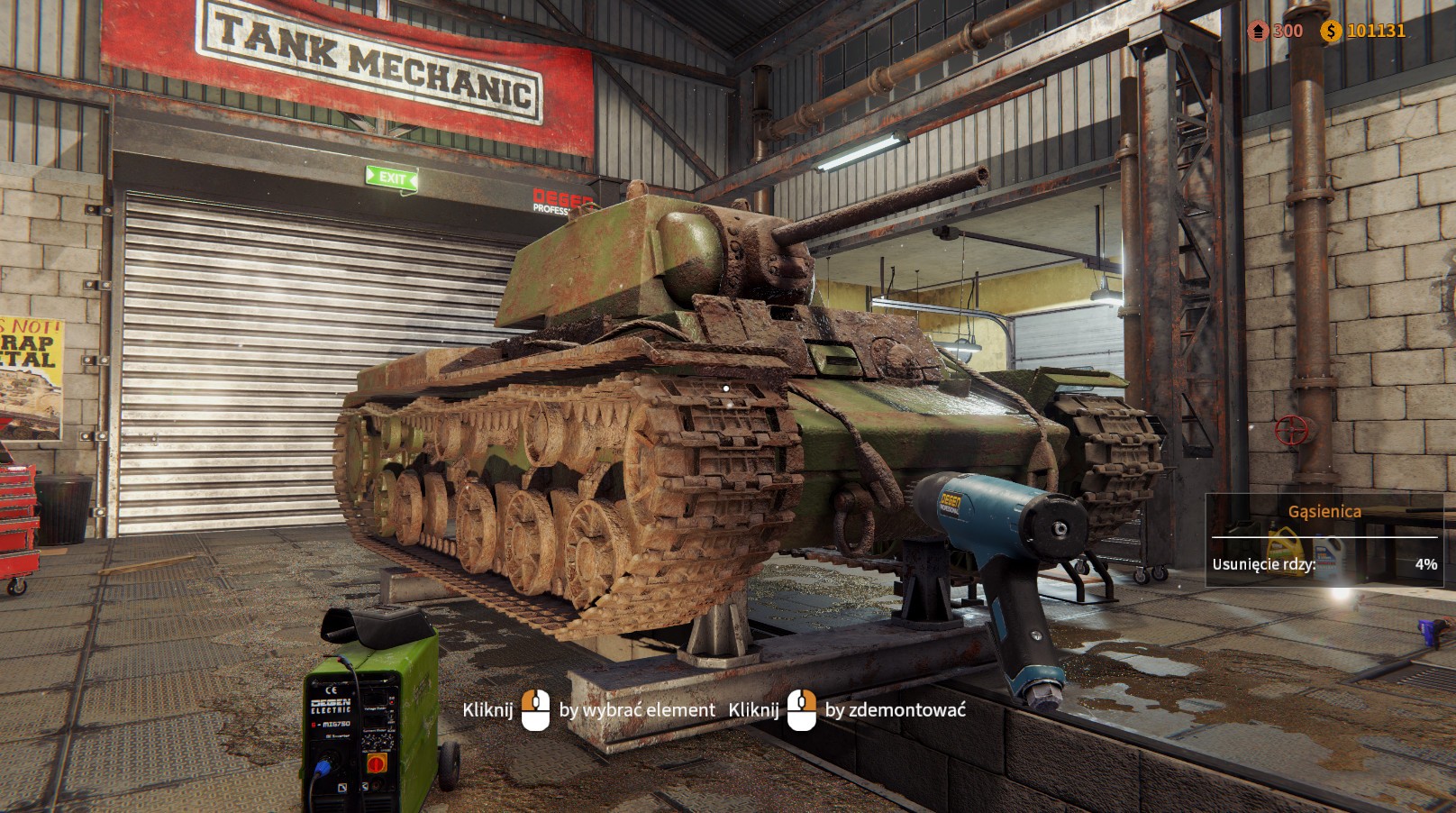 Even though I’ve always enjoyed playing games like Euro Truck Simulator, I wouldn’t describe myself as a fan of the simulator genre. More recently though, as the genre has evolved, new games have found themselves stuck within this designation and so now, I’ve found myself enjoying a new wave of titles. Games such as House Flipper and Plane Mechanic Simulator gave me quite a good number of hours of great fun, so I immediately got eager to get my hands on Tank Mechanic Simulator as soon as I heard about its existence.

Tank Mechanic Simulator is all about what you’d expect, given its name. By focusing only on tanks from the Second World War, the game also ends up allowing you to open your own museum and showcase tanks in there and even though this is not the main point of the game, it adds some extra flavour to it.

Simulator games can be daunting and sometimes people might even just walk away as soon as they know a certain game is a simulator, but while the word is in the name, Tank Mechanic Simulator is an extremely easy game to get into. The game does have a tutorial system in place that gives you some guidance by presenting you with different contracts that approach each of the game’s mechanics. However, this system can simply stop working or keep on showing you the same tutorial message over and over again, which initially forced me to start over on a new profile. 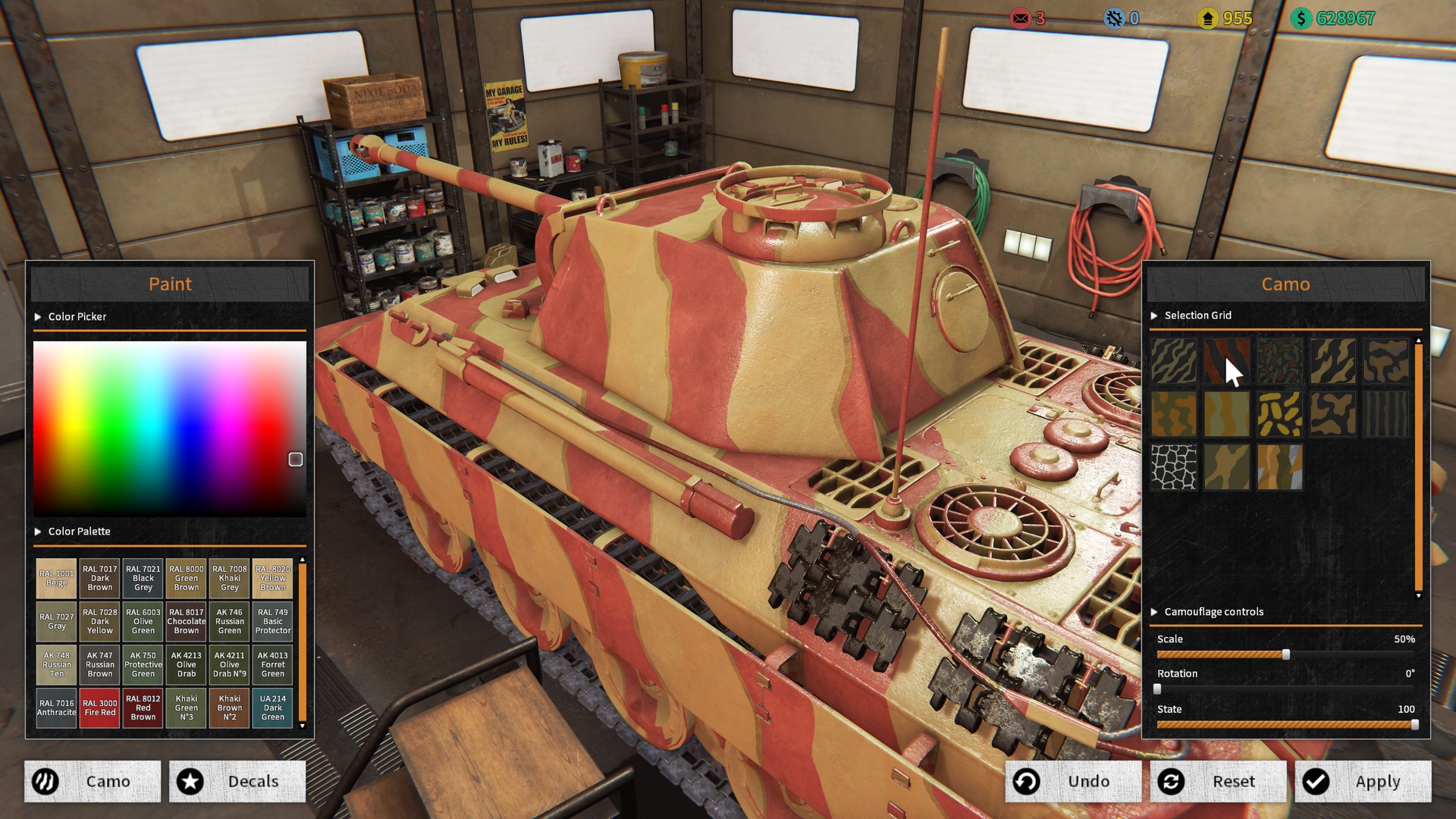 In terms of how it plays, the game is quite accessible and easy to handle. You can select individual tank parts by left-clicking on them, and you remove them or assemble them by holding down right-click; this is depending if you’re on assembly or disassembly mode. Everything can be pretty much done via a radial menu that allows you to check tanks’ stats, its interior, get inside the tank and switch between different seats, check your storage and order new parts, and even disassemble the turret module or remove the engine with a single click. Your whole workflow becomes quite smooth once you get the hang of everything.

The premise and the gameplay loop of the game are quite simple. You have your own workshop where you take contracts to either repair/restore tanks or to extract tanks that were just found in the wilderness. By completing these contracts you not only get paid in cash, but you also earn reputation points. These points represent the game’s only progression system, as they are used to unlock a myriad of upgrades, from more slots to store tanks on your property, to new tools to more efficiently restore tanks or just simple passive bonuses like discounts on repairs and new tank parts. Oh, and you can also unlock the ability to test drive tanks, but who is actually interested in that, right? Now, on a more serious note, driving is not really that great, and if you wanted to drive from a first-person view from inside the tank, just forget it, that is almost absolutely impossible, you can barely see anything through the tiny driver hole.

The game features 14 different tanks, including a few iconic Panzers, a StuG, a Sherman, and the soviet KV-1 and KV-2. Nevertheless, while each fourteen of them are different from each other, the way you approach them as far as gameplay goes doesn’t change. No matter the tank, the entire process of repairing it will always be to either outsource the repairs and pay a hefty sum for it, which most often than not is not covered by the contract completion payment, or you do it yourself, which is the fun part.

These tanks that will stop by your shop will have been through hell, a lot of them have been buried for decades, so getting them back to shape is a thorough process. First, you start by grinding each part to remove all the rust that it has accumulated, and then you sandblast the whole thing to make sure it gets as clean as it can get before you move on to the next phase of the restoration process. After this is done, all that is left is to place a primer coat and then proceed to paint the tank with its original colour scheme. Rinse and repeat. 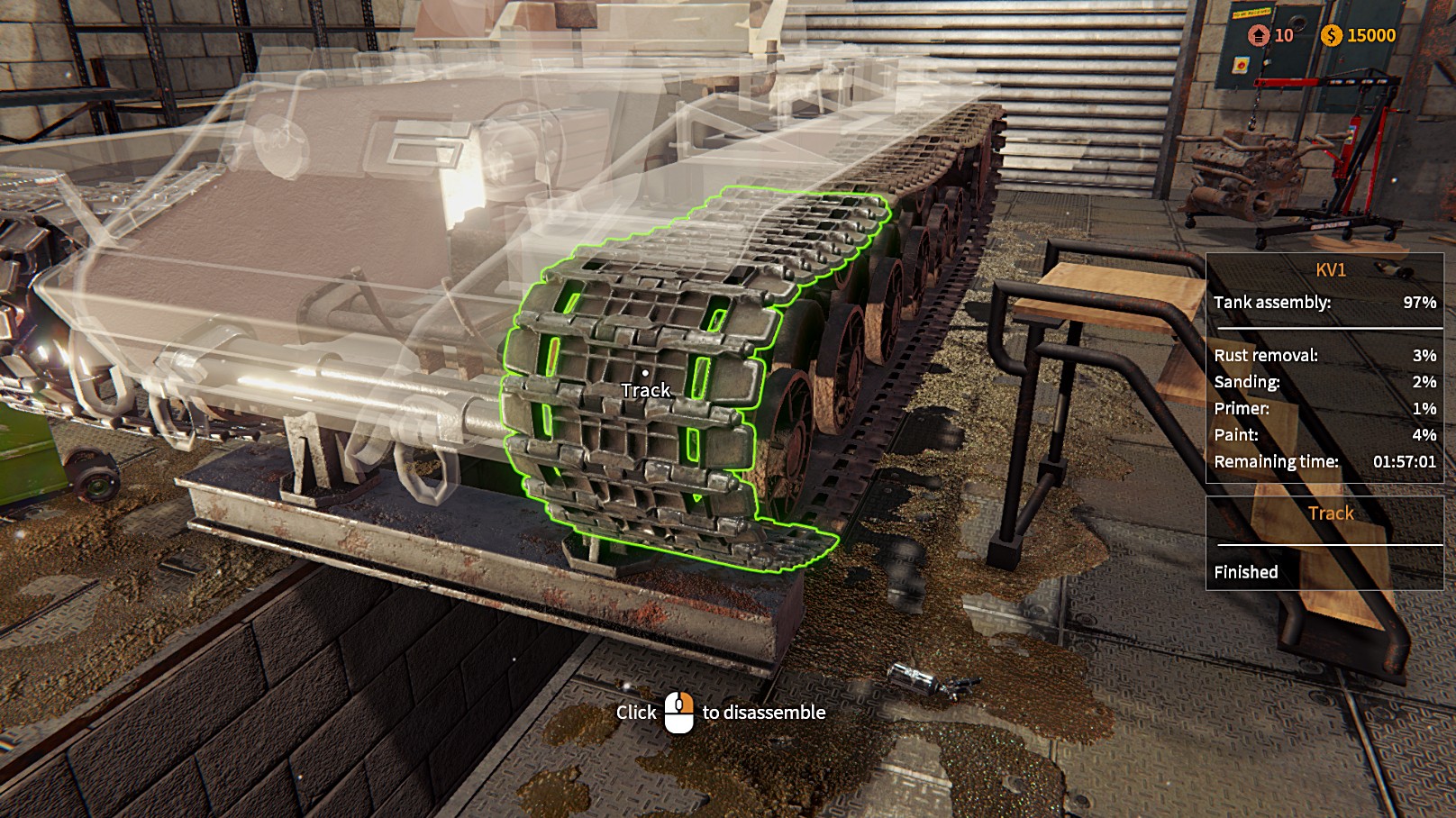 Extracting tanks is also a fun activity, even though it’s short-lived and even if it might be a bit frustrating at first. The way it works is that you find yourself in the countryside, with either a jeep from the Second World War or an off-road quad-bike to move around. To find the nearby tank, you must access your tablet and move to the area it suggests where the tank might be located. Once you’re there, you must then use a metal detector, a magnetometer, or a drone, to pinpoint the exact spot where the tank is located, and after that, it’s time to call in the excavation team to dig it up. After that’s done, all that is left for you to do is to wash away the mud from the tank and take it back to your workshop to restore it to its former glory. With that said, contracts don’t really require you to repair tanks up to 100% condition, they usually just ask you to reach a certain repair completion rate that doesn’t take as much time to achieve.

As I’ve mentioned earlier, the game seems to have some issues with its tutorial system, but the game’s technical problems don’t end there. I’ve had this recurrent problem where, whenever I open the storage and select a tank model to do something with its parts, the parts initially show up, but after a split second they just disappear. To fix this, I just have to keep on switching between tank models until they eventually show up. Furthermore, there are a lot of times where the game will tell me that I don’t have available parts to place in a given spot, even though I have multiple of them in my storage. As far as I can tell, there is no way to get around this, besides doing the whole repair work myself.

That is pretty much the entire game. For some people, this might sound like actual work and quite boring, but, as tends to be the case with these simulator games, the gameplay itself can be quite engaging if you’re a huge fan of the subject of the matter, which in this case happens to be World War II tanks. Despite a few annoying bugs that don’t really break the game, I’ve been enjoying my time with Tank Mechanic Simulator, but its gameplay loop is starting to wear on me after 8 hours. While the game is quite competent at what it does, I’d only really recommend this to people who are absolutely thrilled by the idea of dismantling a tank to pieces and putting it back together. If you’re looking for the next big simulator hit, sadly you won’t find that here.

While the Tank Mechanic Simulator is quite competent at what it does, I’d only really recommend this to people who are absolutely thrilled by the idea of dismantling a tank to pieces and putting it back together.