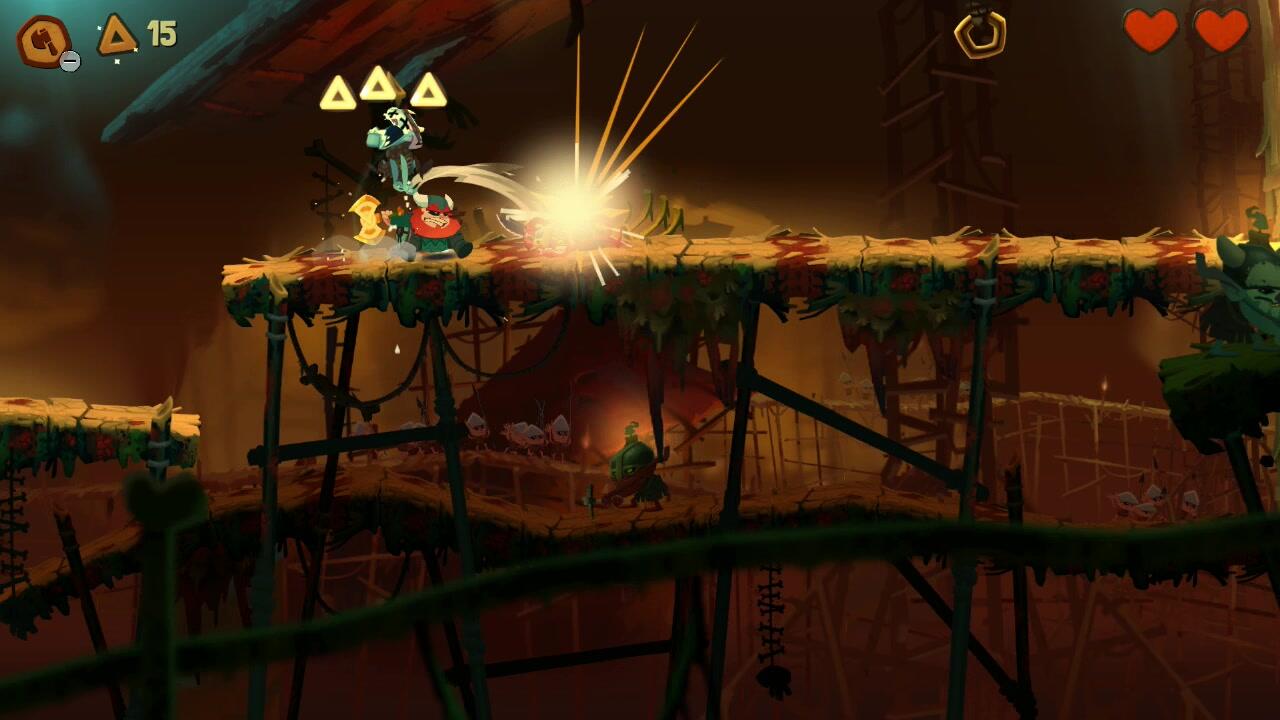 Beards, trolls, Vikings and beer – what more could a girl want? I wouldn’t know as I don’t identify as one, but I will let you in on a little secret: Oddmar had me at heil og sæl. The graphics are gorgeous, the story enchanting – I’ve never had so much fun controlling a ginger beardo. Other than that other time, but I don’t want to incriminate myself, so on with the review.

Oddmar is a lucky chap. He may as well already be in Valhalla as he’s got it good. Only one day, the Chief of the village acknowledges that his lack of input isn’t doing much for the clan and when members of the clan are taken away, Oddmar is instructed with the task of rescuing them and in the process, burn down a forest. Armed initially with an axe and shield, he goes on a 2D side-scrolling platform adventure, encountering mythic beasts shrouded in Norse mythology and other bad folks. But all in a wonderfully Saturday morning TV kids show.

It’s on par with the world of Rayman in terms of animation and artwork. While the style is different, it does feel like you’re playing a spin-off of a Cartoon Network series of similar and I really bought into the world of smashing barrels and launching off mushrooms. Donkey Kong was missing out on the mushrooms. Oddmar feels very family-friendly in presentation, and you could say the same about the controls as well. There was never a moment when I thought it was unsuitable playing in front of my family (just the profanities from my mouth hole when I couldn’t get to where I wanted to). Thankfully that doesn’t happen too much as Oddmar, while incredibly playable, does feel a little on the rails in that the momentum keeps going and there are few moments where you get stuck and through the controls in frustration. 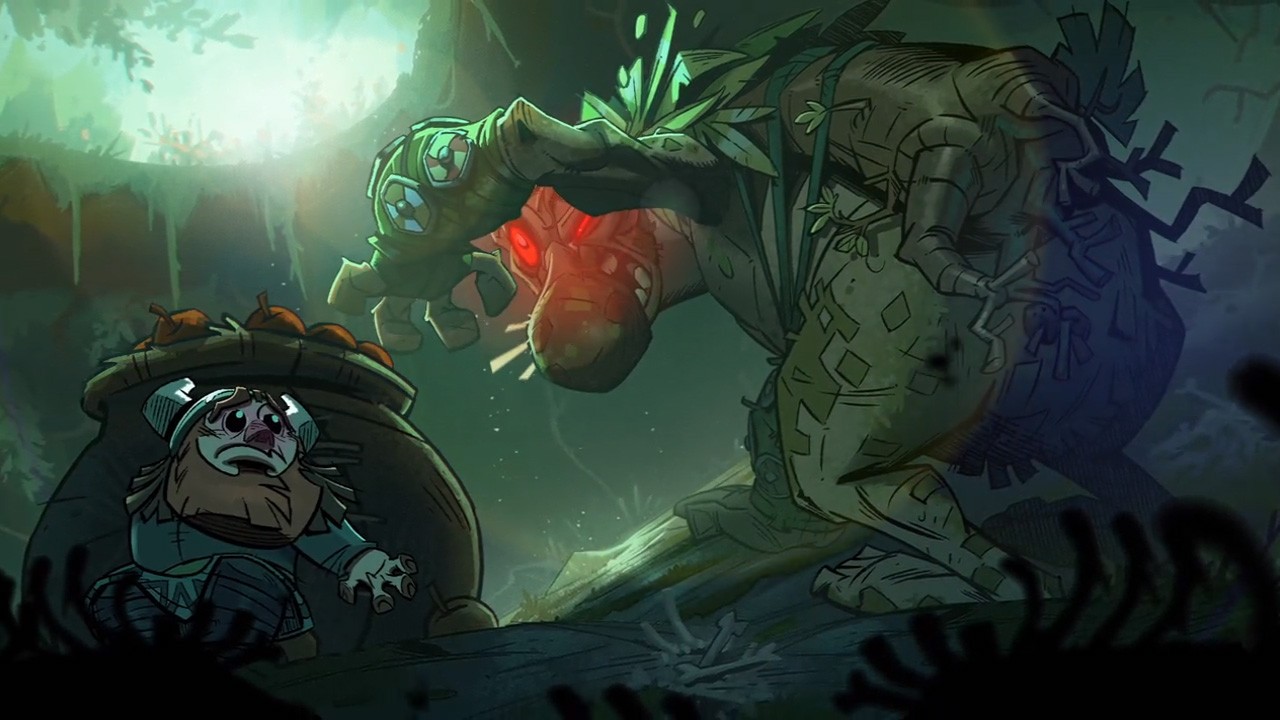 Oddmar doesn’t reinvent the wheel as this is very formulaic platforming action, bouncing from left to right, locating secret areas and collecting currency for power-ups. The gaming world is configured as per Norse mythology; the nine realms – the first being Asgard. Anyone familiar with God of War or Marvel’s Thor will recognise names, but there’s no need to dive in deep as it’s the Super Mario World version as the realms are represented by a 2.5D map where you can move Oddmar back and forth to replay levels. Each area is made up of a series of levels with the last one being a boss. The first boss you encounter, a troll, was pretty cool. You don’t have to fight them but instead run away from him, much like Super Meat Boy’s first boss. It’s relatively easy to get through as you use a few mechanics such as the wall jump to get to a higher level. At no point does it feel impossible; instead, it feels like you’re playing an interactive cartoon as it flows well. That might put off some, however, as the challenge isn’t precisely ‘up there’.

There’s a good variety of levels here, and the artwork differs in each area. While the controls remain the same, the locations spice things up a bit with a few platforming challenges along the way, though they aren’t too taxing. Throw in an upgrade system for new weapons, and you have a typical platform game to keep your interest, but to be honest, you don’t need the upgrades as Oddmar is easy enough. Because of the simplicity, and because it works, it feels quite natural to want to play one level after the next as you can progress quite quickly early on. There are also some bonus areas in the game. At first, I didn’t get these as this entity fires poison at you, Oddmar collapses but reappears in a fun chase type game where you need to collect more currency scattered throughout these areas to unlock new goodies.

Between levels are some gorgeous cutscenes straight out of a fantasy picturebook. The story is expertly narrated (has a whiff of Geoffrey Rush to my untrained ears) and the artwork is stunning. It’s all very lovely having things look pretty but style over substance etc.. well, ignore that. These cutscenes add to the lore and magical element of the game, and it does feel like you are part of a story. There is an underlying story here of friendship, self-purpose, and other universal themes we can all identify with, so the narrative in Oddmar overall can appeal to a broad audience. Perhaps not the hardcore gamers when it comes to challenges, but at least you’d be wowed by the visuals. 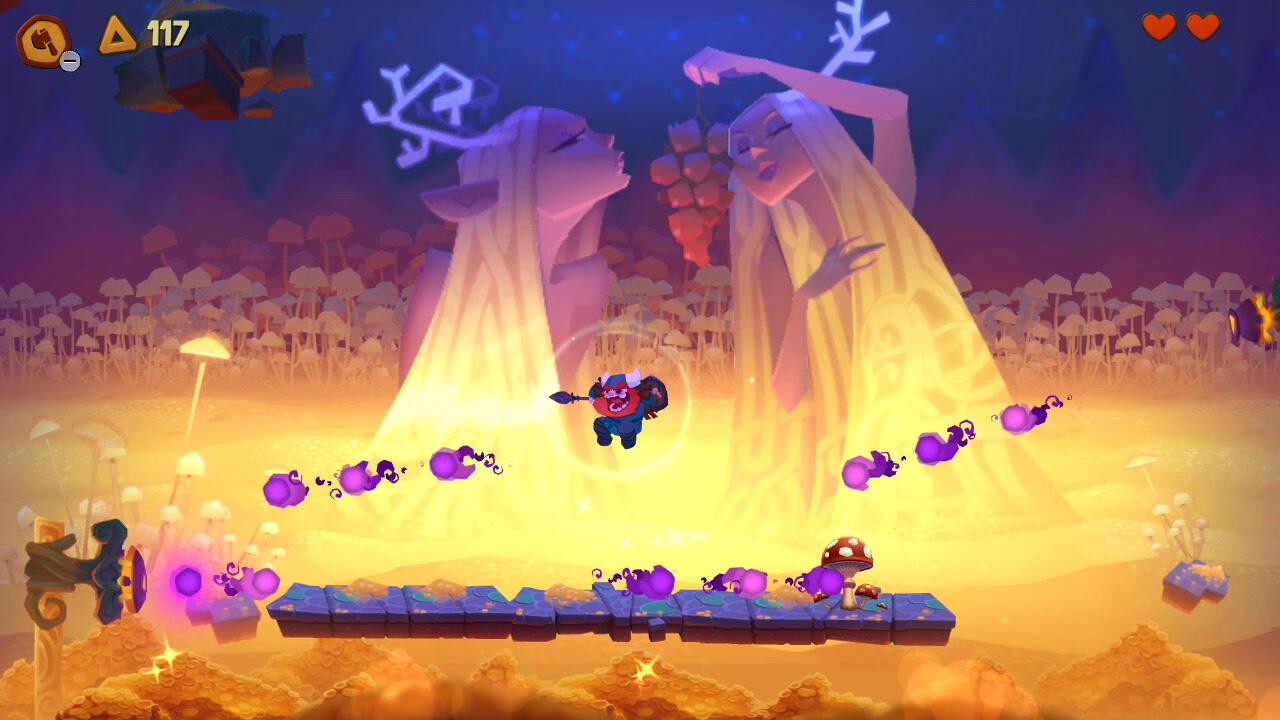 Oddmar doesn’t feel like one of these retro platform games of old or attempt to be emulating other titles. In many ways, it stands on its own two feet and consequently gets launched by a mushroom. You might wonder what the reference to mushrooms is in this review. Every time he jumps, a trail of mushrooms emerge from the ground giving him an extra boost. It makes sense, as for a rotund figure such as Oddmar, he does need aid to get more air, but I wasn’t a fan of it. It has no impact on whether you’ll enjoy the game, just personal preference.

So it’s neither a clone nor breaking new ground in the world of platform games, but if you’re a fan of the genre, Oddmar ranks high. While it isn’t the most challenging of platform games and only features around 24 levels or so, it looks the part, yet it feels interactive too. This isn’t all about imagery with nothing to play, but at the same time, if you aren’t a fan of platform games, give this a miss and just look at stills of the artwork and ooh and ahh at the artists’ mad skills. After finishing the game, are you likely to come back to it? I would think so. This is the kind of game that should be showcased on the Nintendo Switch as it’s found its home here. Interestingly, Oddmar was initially released on mobiles a couple of years ago. How they fair, I don’t know, but if they’re as good as Oddmar on the Switch, I could be a mobile gaming convert.

One for platform fans who want something a little different to the usual retro-inspired, pixel art themes. Oddmar is highly polished throughout, a great experience in terms of gameplay and storytelling, don’t expect it to be one of the more demanding titles out there.