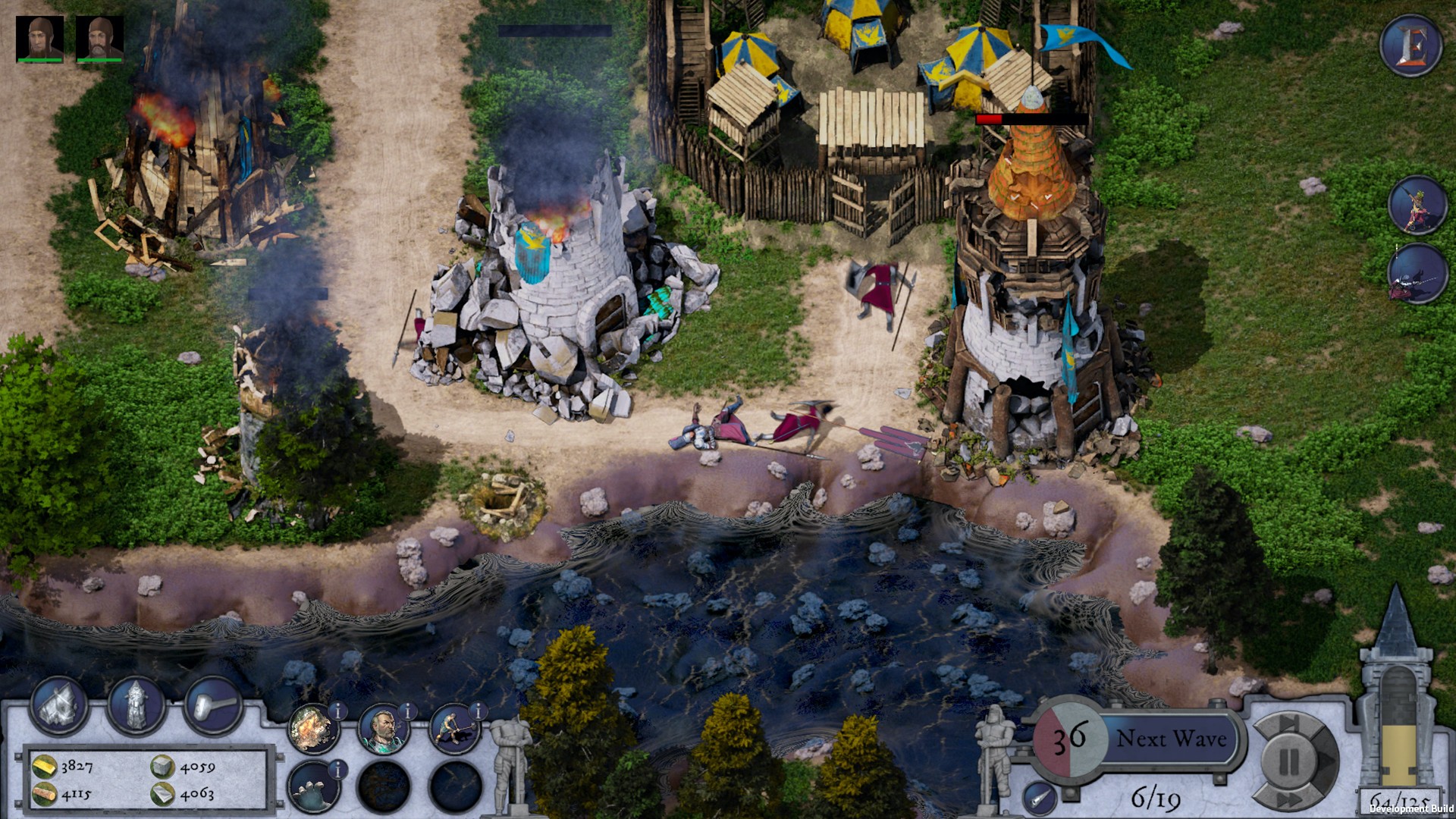 Empires in Ruins is one of those games that truly makes me feel really lucky, given that I found such a hidden gem in the endless ocean of games that is Steam nowadays. Having just played Kingdom Rush Origins before diving into Empires in Ruins, this game feels like such a breath of fresh air. The Steam description perfectly describes what Empires in Ruins is all about, “the bastard child of 4X and Tower Defense, with a black humour infused plot, set in a grim, disillusioned world”, and to be honest, I don’t think I could’ve said it any better.

The Tower Defense genre is pretty crowded, not so much on PC as in the mobile space, but even so, I don’t think anyone ever asked for such a weird combo, 4X (eXplore, eXpand, eXploit, and eXterminate) mixed with Tower Defense. Now, the good thing about it is that it works, pretty damn well actually. The way that the team over at Hammer & Ravens did this is quite clever, as they essentially took two different games and smashed them together. As a result of that, you have a turn-based strategy layer that will feel extremely similar to other 4X titles that you might have played in the past, as you expand your territory, gather resources, and develop different provinces by constructing new buildings. On the other hand, the combat of Empires in Ruins plays out just like any Tower Defense game would.

While Empires in Ruins is in Steam’s Early Access, the entire campaign is already available for people to complete if they choose to, but this will most likely suffer a lot of changes and have a few things added to it throughout the predicted 12 month period of Early Access. Currently, Empires in Ruins not only offers the Campaign mode but also Sandbox and Arcade. While Sandbox grants you access to everything the game has to offer with the exception of the story and witty dialogue, Arcade offers you a raw slice of the game’s Tower Defense combat. Three different modes, all suitable for different sorts of folks, but even so, I highly recommend you play through the campaign at least once, it’s pretty damn worth it.

The Campaign mode puts you in the shoes of Sergeant Hans Heimer and his forces, amid the Western Marches Campaign, where you’re sent in order to squash the rebellious populace once and for all. To put it mildly, Sergeant Hans Heimer is a pain, who treats his underlings worse than garbage, but quite frankly, that is the beauty of the dialogue in this game. I also guess that this fits the game’s strategic layer perfectly, as your own officers can betray you, and the harsher you’re on the populace, the higher the chance that they’ll rebel and start performing all sorts of heinous acts. 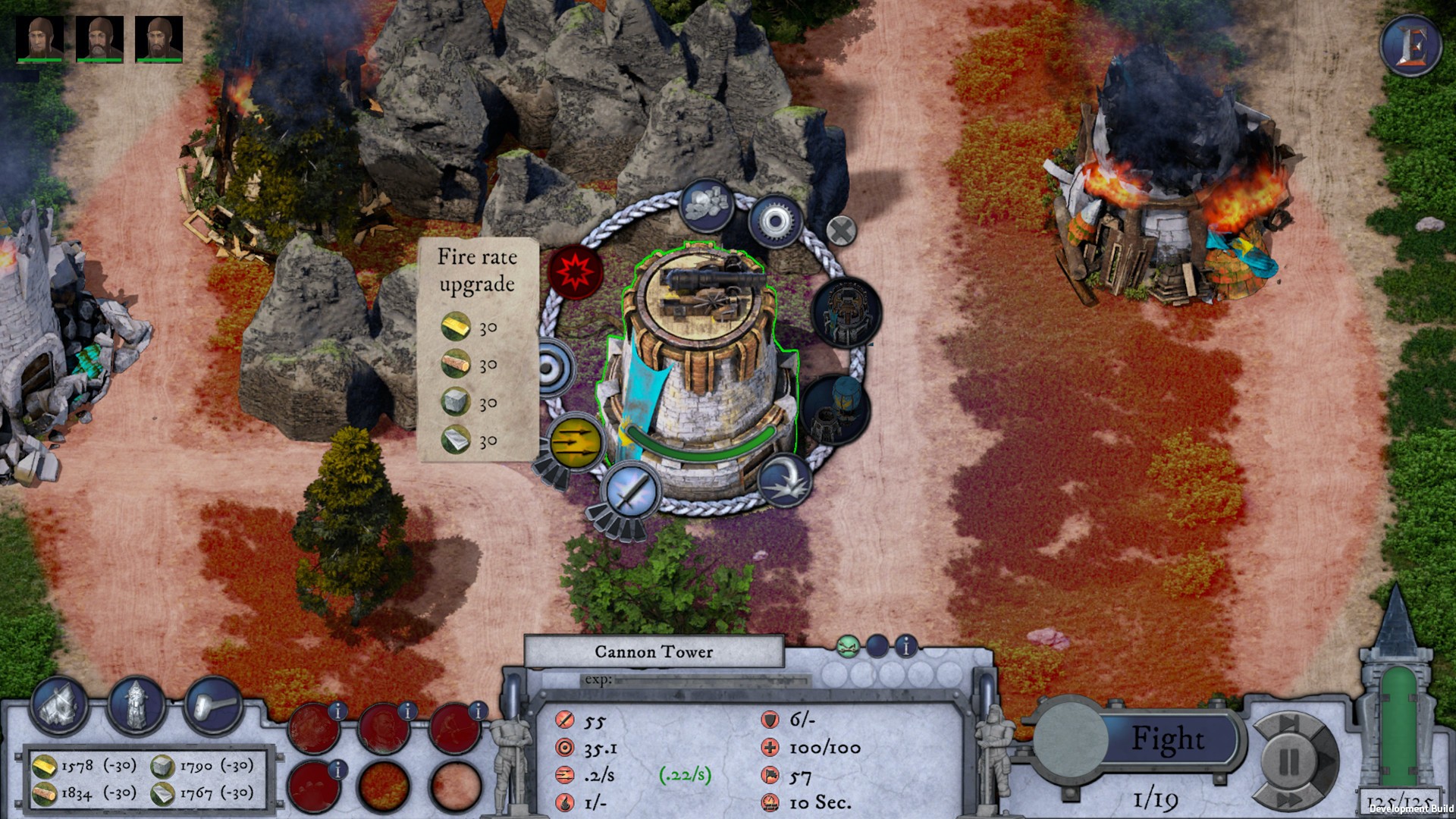 The story campaign is split into five acts, with technological progression and territorial expansion being tied to each of these different acts. Despite the fact that I love the dialogue and the protagonist, even though I’d probably hate to meet him in real life, I must say that I was somewhat disappointed when I realised that each campaign chapter’s objectives simply revolve around conquering specific provinces or keeping rebellious activity below a certain level. There is no actual character involvement or a meaningful story in completing these objectives, although there’s plenty of dialogue going on as you simply play the game and advance to the next turn.

The main goal in Empires in Ruins is to crush the rebellion in the Western Marches, one province at a time, while also making sure that rebellion doesn’t resurface in your provinces. By interacting with each province you can visualize various statistics of how it is doing, the people’s happiness, authority levels, lower or increase taxes, keep an eye on food supplies, research production, and also check the rebel support in the region. Provinces can also be fortified by constructing a multitude of different buildings that will bolster that province’s stats. Each province also tends to have its own set of natural resources, which will limit what kind of production buildings you can construct there, as well as how much of a certain resource you’re able to produce each turn.

Whenever you decide to use one of your provinces to attack or scout another province, the chances of succeeding in your scouting mission or your attack modifier will also be affected by the stats from the province from which you attacked or scouted. Furthermore, by focusing your soldiers from a province in either the garrison or the army, you’ll also change how strong that province’s attack capabilities are, and how much authority you impose given the number of troops stationed in said garrison. I admit that this can feel a bit overwhelming at first, especially since it’s not every day (I actually think this is the first time) you see a Tower Defense game which features a lot of elements from 4X games, but rest assured that everything makes a lot more sense, and it’s not that easy to understand, once you see everything unfolding in front of you.

There are also other mechanics employed in the turn-based strategic part of the game, like assigning officers as governors, attempting to quell the rebellion with strategic and diplomatic efforts, using your HQ to accelerate a province building progress, researching new technologies and even levelling up Heimer himself. In particular, these last two directly affect the Tower Defense side of the game, as it’s through the research tree that you unlock new tower types, increase base tower stats, and by levelling Heimer and assigning level up points to different stats such as Tactics or Leadership can influence things like tower’s rate of fire. 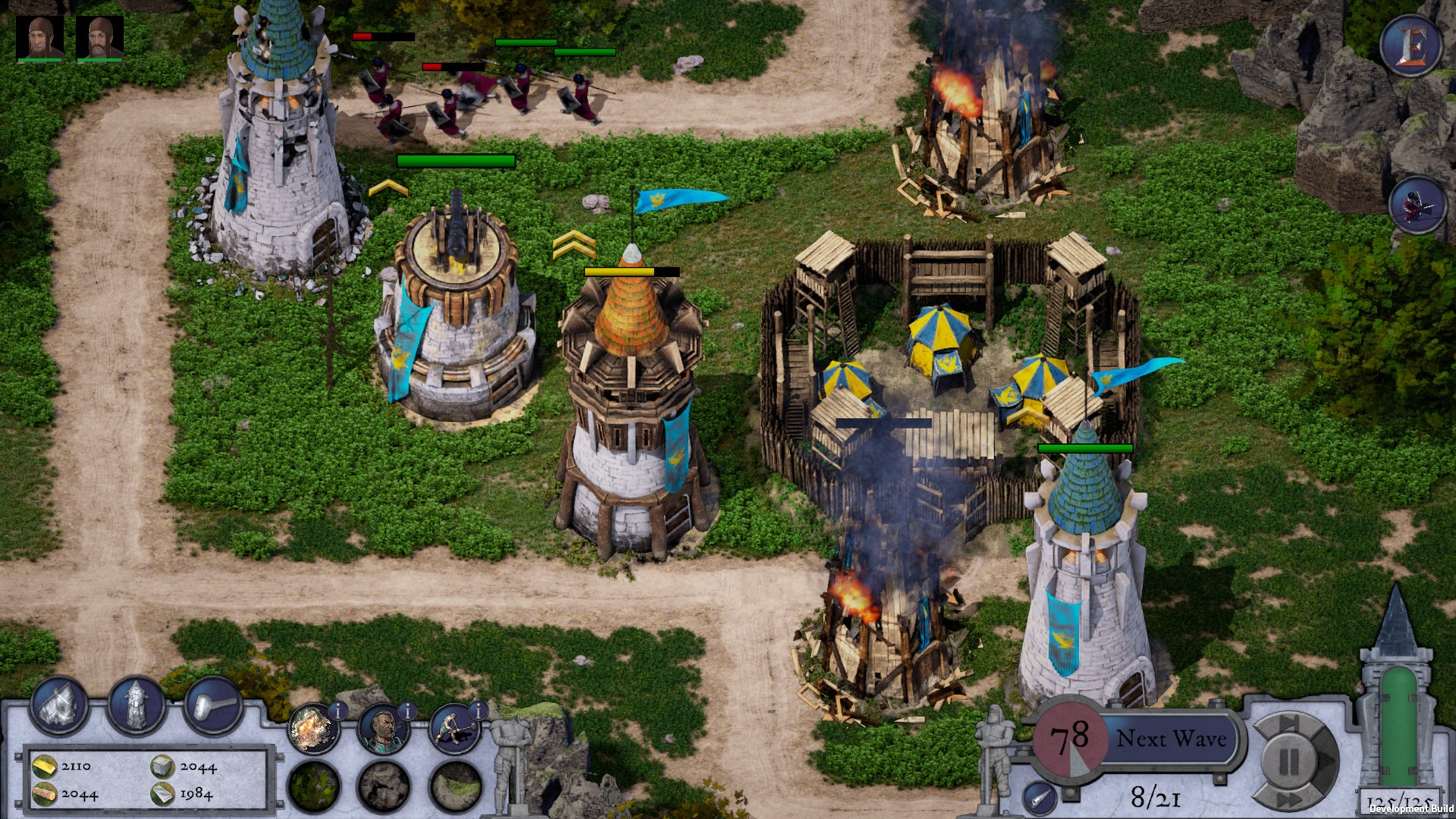 When you attack another province, or if you happen to be defending one of your own, you’ll be taken to another kind of view of the map, where the real action takes place. For the most part, the Tower Defense combat is exactly what you’d expect. There is a predetermined path through which enemy units will move towards your castle, and you have to defend it by building towers either next to it, or a little far off, as the game doesn’t use a limited amount of fixed spots where you can build, but instead it uses a grid system which you can use as you see fit. Nevertheless, you usually want to start building towers next to your castle, and then expand towards the edges of the map as combat progresses so that you can cover more ground. There’s also the option to upgrade your towers as much as you can instead of building new ones, by not only increasing their range, damage, and rate of fire, but by also completing transforming them with the special upgrade paths that you unlock in the research tree.

There are quite a few things which Empires in Ruins does quite well, and in doing so, it sets itself apart from other titles in the genre. For instance, there are specific enemy units that drastically change how each wave behaves, from the sapper that opens new paths for enemies to pass through and attempts to blow your towers, to the marauder that waits for towers to shoot other units and then proceeds to sprint across them in an attempt to escape, to other more uncanny individuals (whose name I now forget) which can temporarily disable your towers, thus allowing enemy units to slip through your defenses untouched.

Despite the fact that the campaign is already available from start to finish, I have not yet beaten it, as I’m going to save that for when the game fully releases. Nonetheless, Empires in Ruins is a brilliant mix of turn-based strategy management with the combat of a Tower Defense game. It might sound confusing and overwhelming at first, but once you get your hands on it, you’re quickly able to see how remarkable everything works and clicks together. What Hammer & Ravens have managed to pull off with Empires in Ruins so far is exceptional, and I honestly can’t wait to see how the game evolves as time goes on.