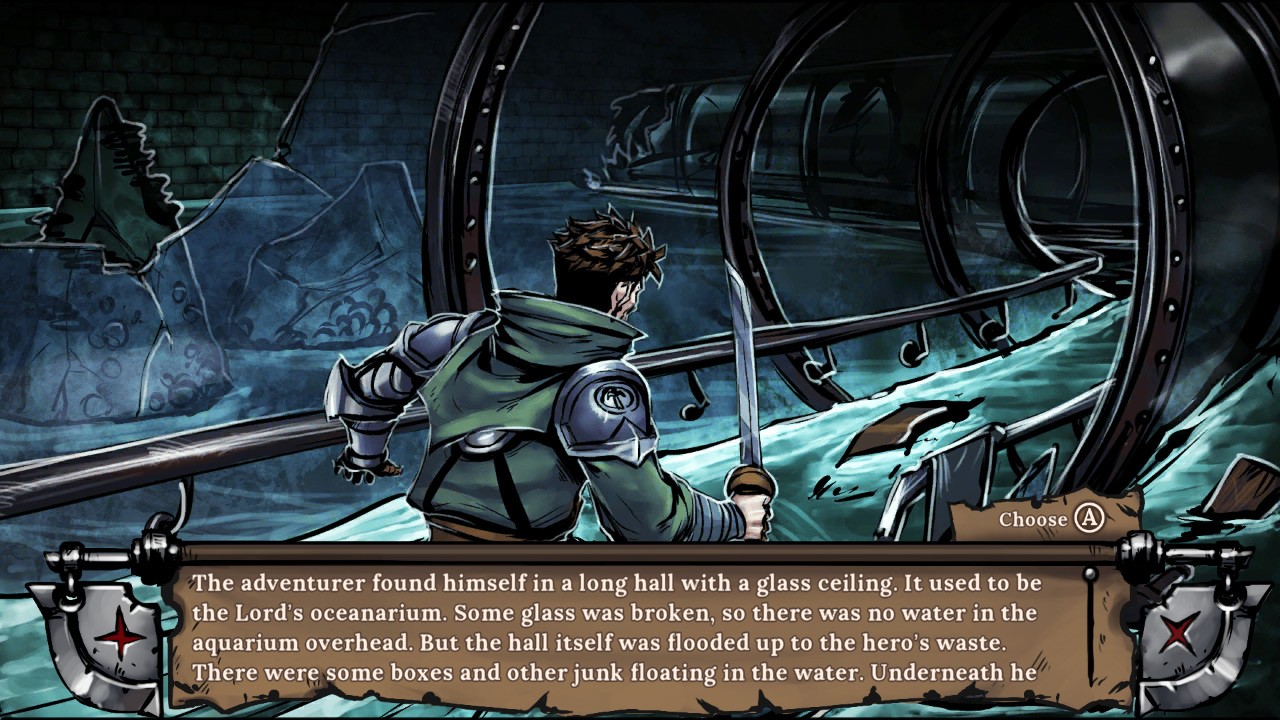 Swordbreaker The Game is a choose your own adventure game set in a fantasy world where you are the hero storming the castle of an evil lord. Swordbreaker The Game utilizes still images and rousing background music to accompany descriptive text blurbs in order to create an immersive experience and, for the first couple of playthroughs it does so effectively. Unfortunately, some textual errors, weak prose, and a repetitive and somewhat jarring BGM selection hold this ambitious adventure back from greatness.
If you’ve ever read a choose your own adventure novel, the concept is very much the same in Swordbreaker The Game: you read through the story and make decisions at crucial points that will affect a scene’s outcome. What sets modern gaming aside from good old ink and paper, of course, is the ability to add little flourishes like special effects and sound bites that can aid in boosting immersion. That boost, of course, depends on the existence of a solid foundation–namely, strong prose. Swordbreaker The Game has its moments, but for the most part its sophomoric attempt at writing isn’t much fun to wade through thanks to semi-frequent errors, poor pacing, and a lack of variety in options. 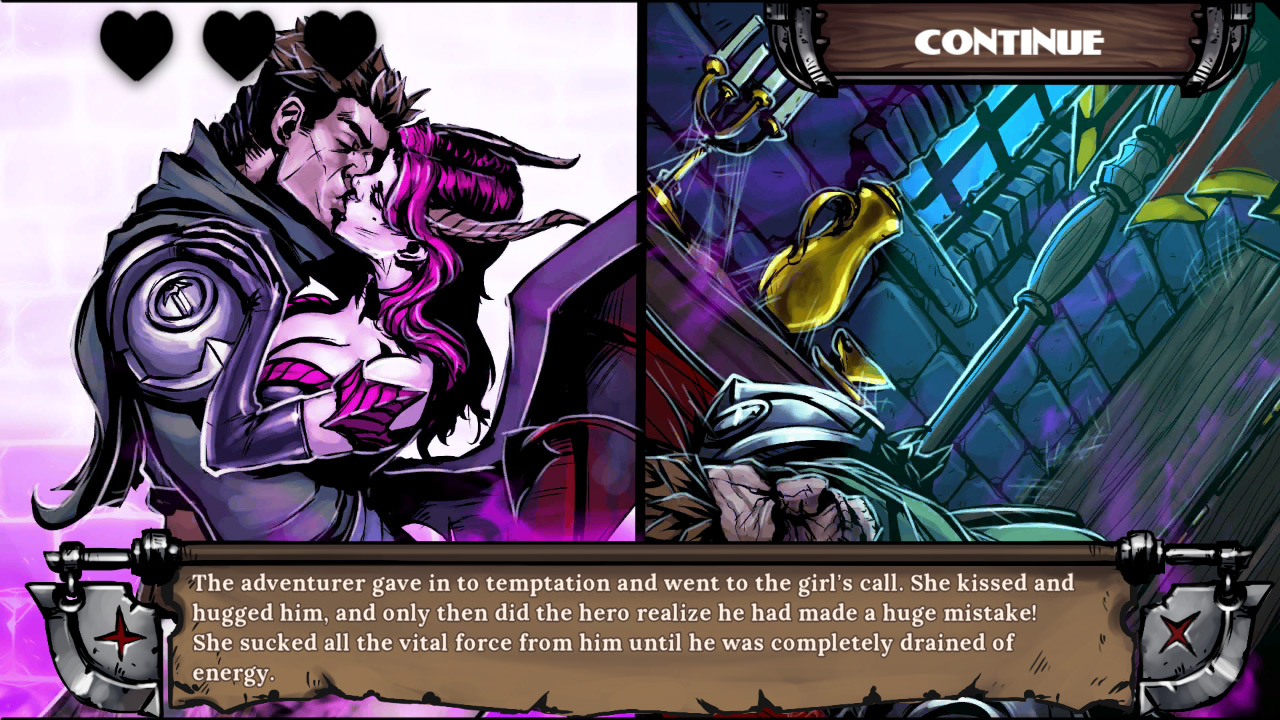 You get three chances to mess up before seeing a final game over screen. Making the wrong choice leads you right back to the moment before you made a decision, allowing you to select something else. There are usually only two decisions presented at a time and oftentimes they’re as simple as “do this or don’t”, or “go here or go there”. What this means is that when you do get a game over screen, you’ll have to wade through the text you’ve already read and make all the same decisions in order to get back to a point where you’ll actually be able to read something new. I believe this slog could have been easily circumvented by allowing a save and load system or even by removing the three lives entirely. Honestly, there’s no reason to have it except to discern the end game scenes from the regular scenes.
Swordbreaker The Game’s pacing could use some serious work; the fact that these decisions were thrown at me every sentence or two discounted the significance of said decision-making. Situations in Swordbreaker The Game sometimes have a very obvious correct choice. Should you approach a mysterious woman in the late King’s bedchamber after being warned not even one screen ago that there’s a succubus on the loose in the King’s bedchamber? Probably not. And it’s also not a great idea to eat that poisonous looking mushroom, either. There’s not a whole lot of reward for risk and I often found myself staying on the safe side of things to avoid stupid and unnecessary deaths I could see coming from a mile away. On the other hand, sometimes the right decision wasn’t so black and white. Was it a good idea to sneak past a bulky bore with razor sharp tusks rather than engaging it? I thought so, but apparently boars hate sneaking. Who knew? 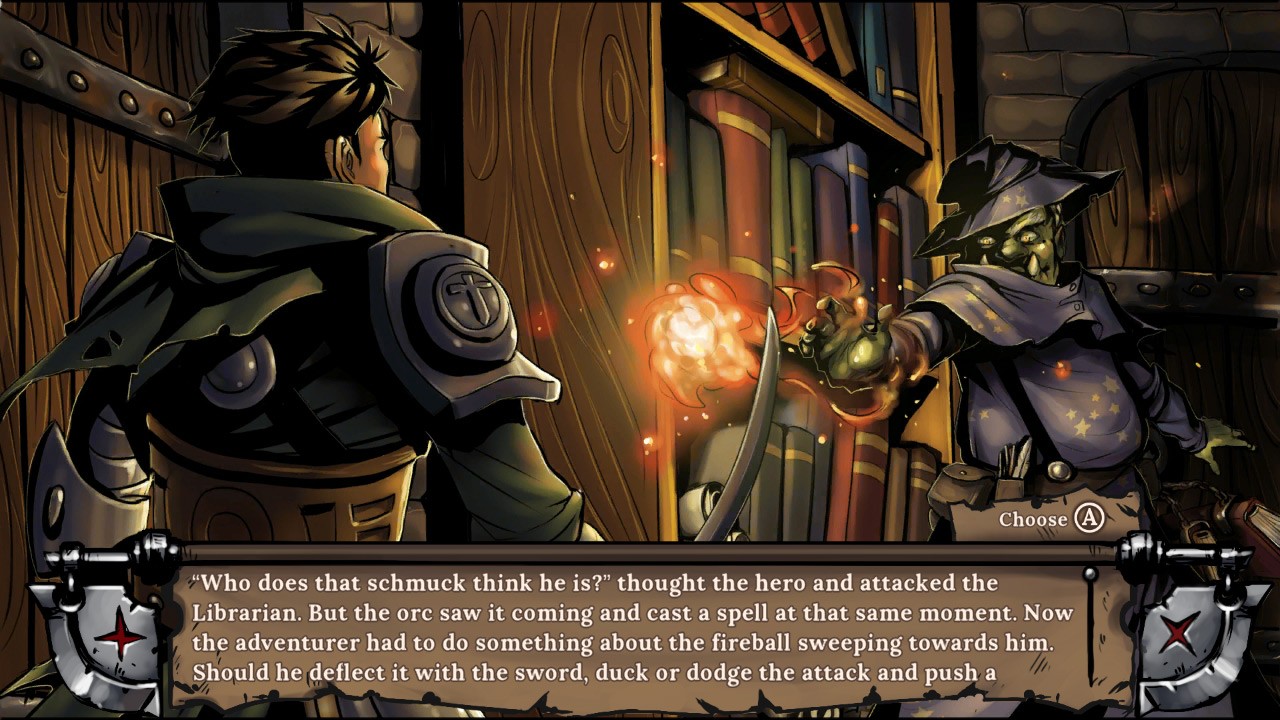 Swordbreaker The Game boasts a total of 333 scenes, meaning the illustrations accompanying the text, and 125 of them are game over screens. Let’s do some quick math: this means over 1/3 of the game is way for you to either be horribly killed or, less likely, successful in your quest. The BGM is quiet and inoffensive until you get to one of the many action sequences. Then… The music becomes a little more grungy and a lot more aggravating. It doesn’t help that it plays on a loop.

Swordbreaker The Game seeks to be a grand adventure, but it’s held back from greatness by sub-par writing. It looks great, if you’re into comic books, and some of the scenes are memorable, but its going to take some doing to see them all. I personally was not willing to play through the same text slog multiple times in order to see new endings, but then maybe you will be. If you’re not the most discerning reader, Swordbreaker The Game may scratch your adventure itch. If you are, you can safely skip this one.

Textual errors, weak prose, and a repetitive and somewhat jarring BGM selection hold this ambitious adventure back from greatness.