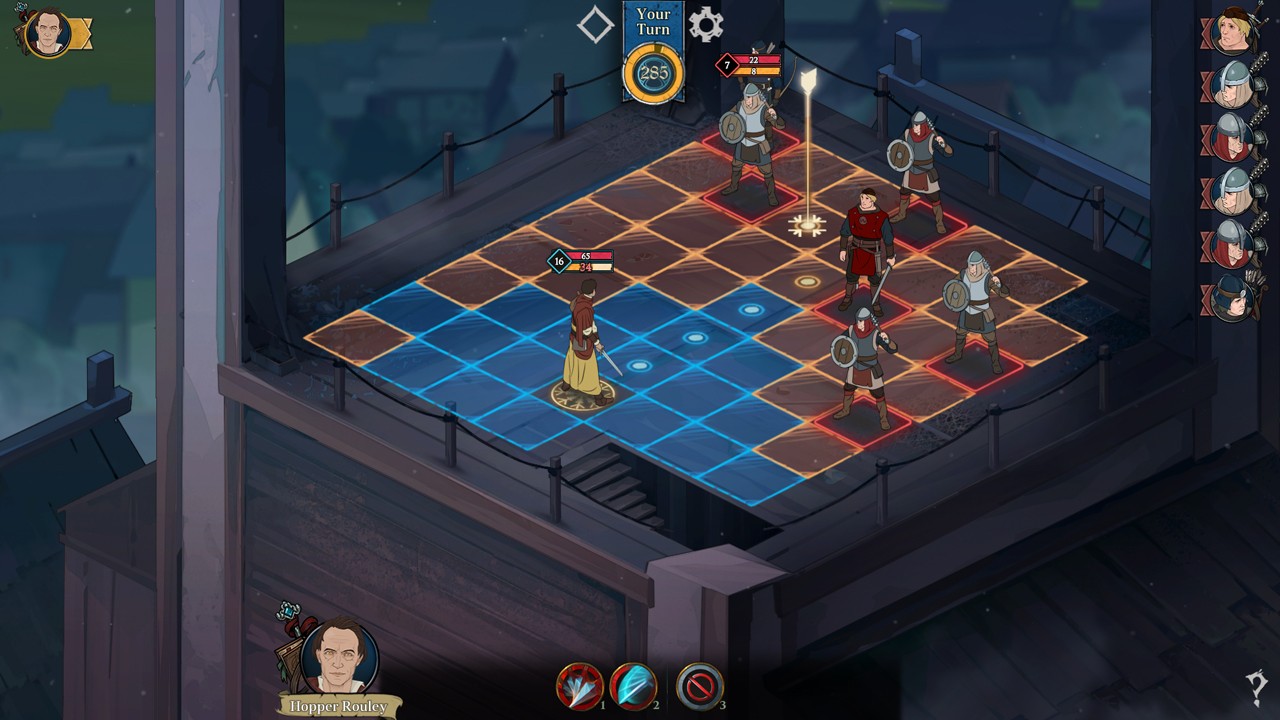 Aurum Dust’s 2020 release ‘Ash of Gods’ is a labour of love, there is simply no doubt about that. Beginning from a humble Kickstarter project, ‘Ash of Gods’ has a highly talented team behind it, who are all there for the right reasons. The developers love for all thing fantasy, and tabletop gaming is a clear influence in plot and gameplay, so it’s a natural choice for anyone who shares this interest. Being a long term Dungeons and Dragons and fantasy novel fan myself, I was sure that ‘Ash of Gods: Redemption’ was going to be my game. I may have been far too keen. ‘Ash Of Gods: Redemption’ is a tactical story-based RPG game, with exceedingly heavy influences from ‘The Banner Saga’ and ‘The Witcher’ series. If you’re a budding fan of ‘The Banner Saga’ desperate for another kick of its unique storytelling and combat; however, ‘Ash of Gods’ is still probably not the game for you. As a newcomer? You’ll be too lost in the complex narrative and grinding combat style in order to appreciate sincerely what the game does well. The team at Aurum Dust perhaps allowed their influences to guide them too much, resulting in rather too many stylistic and mashed gameplay elements, resulting in ‘Ash of Gods’ somewhat cowering in the shadows of its forebears.

The plot at its baseline is fascinating, no doubt about it, written by award-winning Russian fantasy author Sergey Malitsky, whom the developers hope the game’s release will kickstart interest in his work in the western world. An incredibly sweet notion and I can’t deny it, I would love to read more. You enter the world of Terminus via a prologue, an animated battle which could arguably give ‘Avengers: Endgame’s’ final battle scene a run for its money. Here is the first, and arguably only attempt within the playtime of ‘Ash Of Gods: Redemption’ to establish some form of context and history. From that point onwards, however, it’s up to you, as the player to try and work out what has happened and happening through Skyrim-Esque choice based conversations. Oddly enough though, many of the citizens of Terminus seem as clueless as you are, solidly refusing to admit to any threats of danger, despite the intensely fantastical world you roam. The narrative essentially splits into three, but with each line dealing with the same central issue, the return of the Reapers. 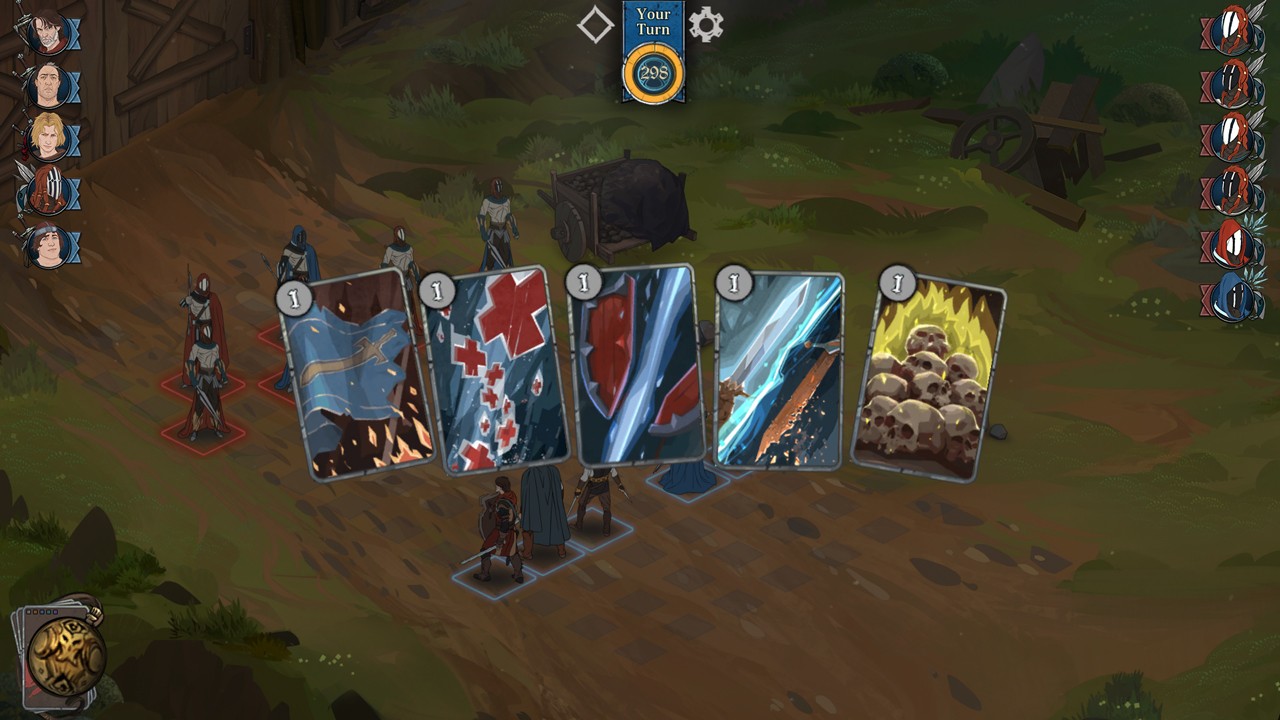 Once angelic beings, the Reapers turn on humanity in the absence of a God, vowing to spill mortal blood to reinstate the Old Gods. After seven hundred years of peace and prosperity in Terminus, the Reapers suddenly return and lay waste to the land, and those who live there. They bring with them a deadly plague, noticeable only by a black mark on the back of the neck, and the murderous rage it drives them to. Thorn Brenin, Captain of the Guard, has a daughter, who has been marked by this plague, and together they seek a cure. Hopper Rouley, a bitter Immortal warrior whom we meet in the opening scene, is seeking vengeance after his failed sacrifice on the battlefield, and Lo Pheng, an assassin whose only impact really seems to be witty and brooding humour. Playing as all three characters, you take control of history, with each and every narrative decision making an impact upon the future gameplay. The in-game narrative unfortunately does feel clunky, and borderline uncomfortable. This would be easy to look over, however in ‘Ash of Gods’ dialogue takes up a significant quantity of game time. This however could be down to the translation into English from Russian, which is an understandable hiccup, and with a few tweaks here and there it could be easily rectified.

Not so shockingly, the actual tactical gameplay seems lifted straight out of the game which shan’t be named again but is completely also the same– Banner Saga. However, somehow, ‘Ash of Gods: Redemption’ seems to manage to take everything sticky from it, and make it ten times worse. The grid-based battle phases are painfully slow and convoluted, and the AI almost always generates a much higher attack than any of Hopper, Thorn or Lo’s capacities. By the nature of the turn-based tactics- you attack one enemy, switch character, attack again, and then hand over to the enemies turn- your characters easily tire and wound. In fact, after four wounds, that character dies permanently, and you must navigate the rest of the plot without them. The only way to avoid this is via ‘Strixes’ which cleanse and heal, but they are so few, and far between that you more often than not find yourself walking around on the brink of death, an incredibly risky position in a turn-based tactical such as this. While I understand that Aurum Dust’s aim here is to make things as realistic as possible to remind you that death is always near, and life goes on after, it takes what ought to be a fun brain game and makes it much too complicated and far too much effort to enjoy. Think grind levels of ‘Ark’, but without the pay off at the end. To throw yet another spanner in the works, ‘Ash of Gods: Redemption’ also adds in an odd card game strategy during battle. By collecting cards, in a weird Yugioh-ifed way, you can trigger upgrades, spells and other such abilities. In an attempt to separate itself from its inspiration, this odd extra element simply adds to the confusion, and the capabilities it grants you just aren’t powerful enough to quantify any worth in their collection and use. 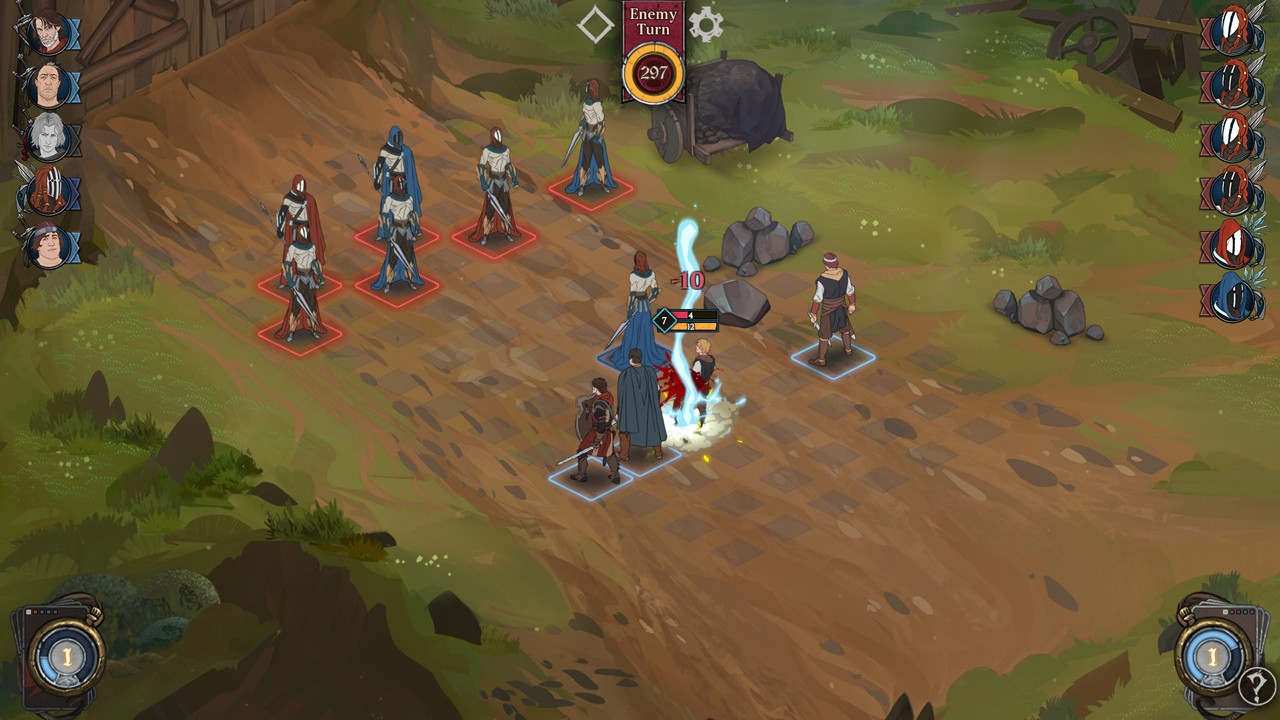 If anything can be said about Aurum Dust’s 2020 release ‘Ash of Gods: Redemption’ it is, at least, a stunning game. Unfortunately that might however be the end of it. The scenes and animations are painterly and painstakingly designed by the team, real experts in their chosen field. Landscapes are sprawling and vary from wide breathtaking natural scenes, to small, quaint quasi-medieval towns and villages, creating a real sense of realism. Stylistically Arum Dust state that their influences in design and animations are taken from Ralph Bakshi, he of the animated Lord of the Rings, and old school Disney. Its nice actually to see the embracement of classic 2D animation styles again, and they really have mastered it. Fusing 2D with Motion capture technology brings a fresh breath of air as well as a hint of nostalgia to the ‘Ash of Gods’, and I sincerely hope that if anything, other game devs will be inspired to do the same. Musically too, the game outdoes itself. Composed in collaboration with Adam Skorupa, Krzysztof Wierzynkiewicz (yes, he of ‘The Witcher’) and Michał Cielecki the score is truly something to behold. Perfect for every change in mood, the style integrates flawlessly within the fantasy theme by using traditional medieval European instruments, and supporting and showing off the talents of independent polish musicians who were involved.

So, should you play ‘Ash of Gods: Redemption?’ If you love ‘Banner Saga’, don’t mind reading a lot, and are an avid strategist, then this is the game for you. Full of twists and turns, and an infinite number of ways to play, you would get a lot out of it, again and again. However, if you’re just looking for a fun fantasy tactical, don’t waste your money. What with difficult dialogue, complex narrative and frustratingly over complicated and overpowered battle phases, its just not simply worth your time and sanity. My teenaged Brother, an avid gaming fan and self-proclaimed hater of Fortnite barely made it past the tutorial once I’d finished playing. So if you won’t take it from me, take it from the fifteen year old, ‘Its just not worth the effort’. For what it’s worth however, download the soundtrack. Meanwhile, I’ll be here wishing for the day that they make ‘Ash of Gods: Redemption’ into a great 2D animated feature film. Netflix? I’m looking at you.

If you’re a budding fan of ‘The Banner Saga’ desperate for another kick of its unique storytelling and combat; however, ‘Ash of Gods’ is still probably not the game for you. As a newcomer? You’ll be too lost in the complex narrative and grinding combat style in order to appreciate sincerely what the game does well.