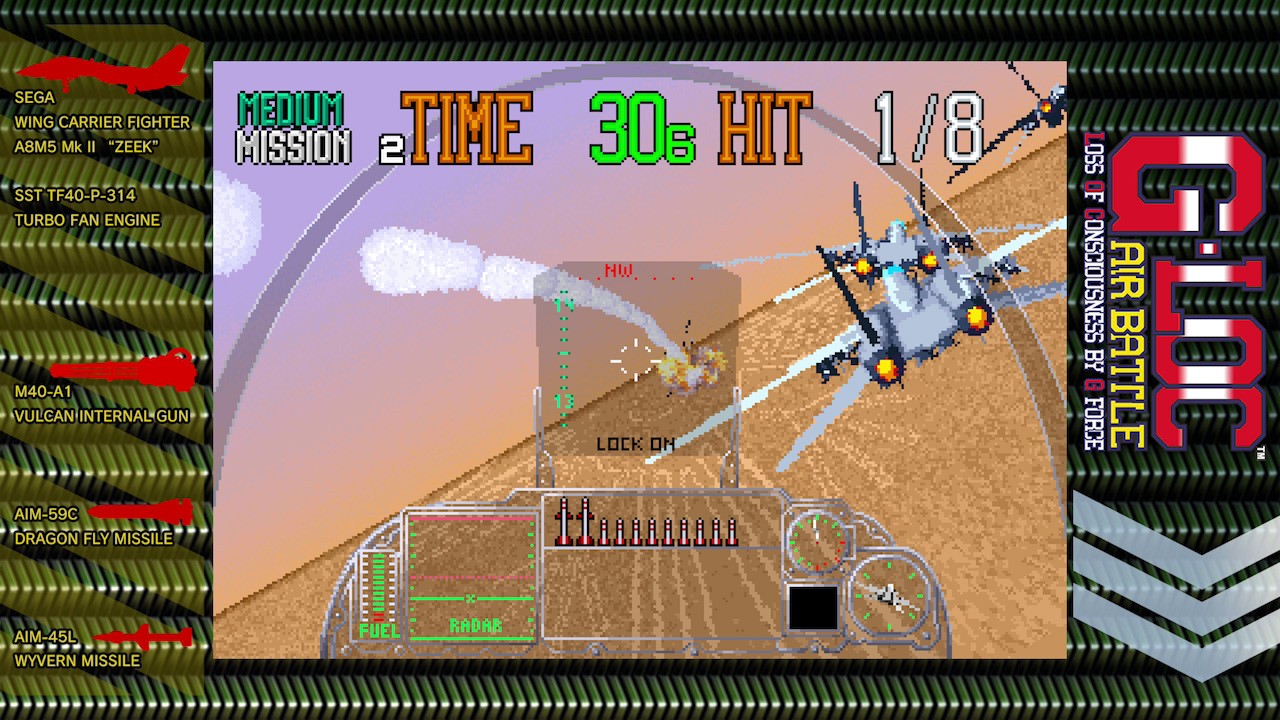 From the mid to late eighties, I spent a good deal of time within the amusement arcades of my local fairground. Believe me, if I hadn’t, I’d be a rich man now. This was because of the amount of pound coins that I fed into the addictive lure of the arcade machines there; the guiltiest ones being Outrun and Afterburner. This was largely down to, not only the thrill of their gameplay and the crowd gathering of my driving and combat skills, but to the ‘never-before-seen’ cabinets that moved in unison to your inputs; often swaying you left and right, as well as back and forth, as you drifted tight bends or dodged a barrage of oncoming missiles. The one thing that was well worth all those lost coins that constantly got fed into the continue slots, was the memories of such games. However, with today’s technologies, these games can be revisited within the comfort of our own bedrooms and living rooms; all without the need to constantly be penniless. The latest of such games also used to be a firm favourite of mine, following on from the success of Afterburner, and that game is part of the SEGA AGES collection, as G-LOC: Air Battle outmanoeuvres a release onto the Nintendo Switch.

Developed by M2 and published through Sega, this air combat, arcade simulation was a successor to SEGA’s other, similar, combat sim, Afterburner. However, G-LOC: Air Battle changed a number of elements to make it a distinctly different style of jet fighter. First-person views, mission objectives and a light sprinkling of depth all combined to produce an Afterburner/Outrun hybrid that managed to attract a few coins from out of my pocket; let alone its extremely rare iteration of a fully 360 degree rotational cabinet! Now, this high-octane flight combat sim has made its way to become the next release in the Sega’s AGES collection of retro, arcade games. As with the majority of other games within the series, G-LOC: Air Battle also comes with a host of extras to push the envelope of G-Force consciousness even further.

Although at first sight, G-LOC appears to play in a similar fashion to Afterburner, the emphasis here is more on the offensive. This is due to each of the levels requiring you to destroy a pre-requisite number of aircraft within a specified time limit in order to advance to the next stage. This in turn, much like Outrun, then extends the time needed to complete the next sortie. Viewed from within the cockpit of your fighter jet, you need to dispose of enemy aircraft through two means of weaponry: the trusty vulcan cannon and the life-saving smoke trails of lock-on missiles. For the most part, your cannon takes care of the close-up encounters, whilst your missiles, once a ‘lock-on’ has been attained, takes care of more, distant aircraft. 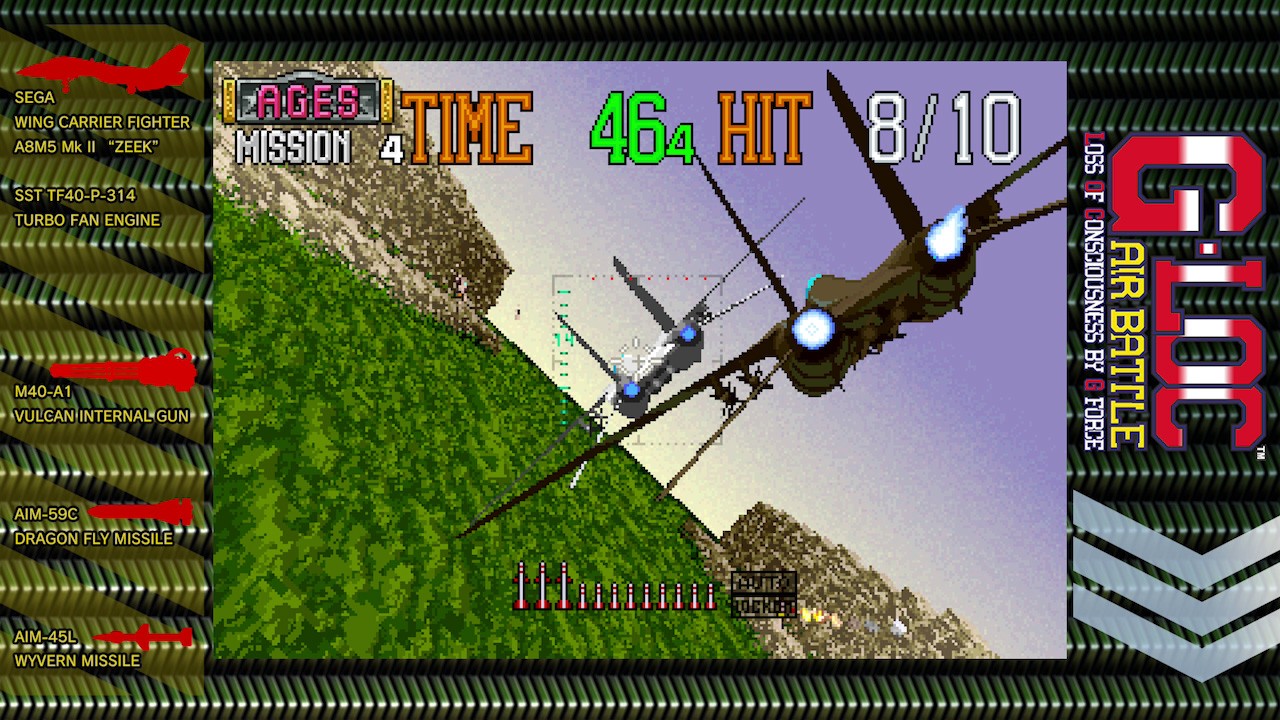 However, the enemy also have their sights firmly locked on you too; firing a silo of missiles, chasing you from behind and getting in close in order to eradicate you from the skies. To combat this, you can also perform a series of manoeuvres that sees you barrel roll, flip your aircraft, boost your engines and activate an afterburner in order to get one over on your ever-increasing enemy threat. The main aim here then, is to efficiently meet the mission requirements as fast as possible to become a true G-LOC top gun pilot. Although similar to Afterburner in many respects, the extra elements found within G-LOC all combine to produce a far more exhilarating experience.

The game comes with three difficulty modes: Beginner, medium and expert. However, what makes G-LOC stand out, is that each difficulty mode alters the state of play dramatically between them. For instance, Easy mode restricts some flight mechanics and puts you up against nine stages; whereby medium holds thirteen levels and Expert covers sixteen. The real difference comes in, not only through challenge and level numbers, but also in the ability to present more option with aircraft handling, from barrel-rolling, flying upside-down and more importantly, fuel consumptions. This was something that never featured in Afterburner and, for the most part, isn’t a function that you need worry about in G-LOC. But during the higher difficulty levels, with its constant speed adjustments and afterburner utilisation, fuel becomes an extra element that needs a watchful eye.

As with the majority of other titles within the SEGA AGES series, G-LOC also comes with a host of extra features to make it more accessible and playable over the long-term. An array of options allow you to tailor-make your experience, from faster lock-ons, automatic cannons and screen adjustments to centre your aircraft should you veer off-course. As well as these, you can also customise screen ratios, layouts that include scan-lines and wallpaper backgrounds. The best of the bunch though,  comes with an extra game style, Ages Mode and the ability to play the game in a format that replicates the viewpoints of playing in an arcade; including the moving cabinets that I spent much of my youth on. 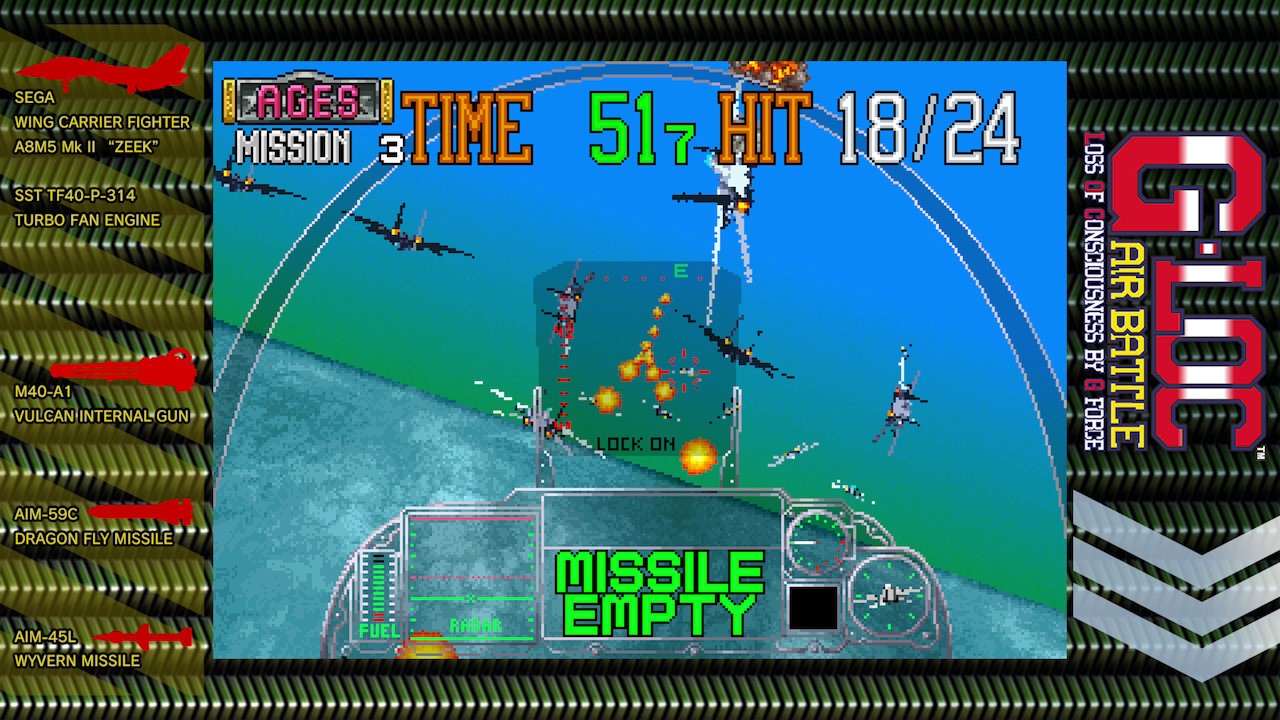 The Ages Mode presents the complete sixteen levels, but one that is based on a singular level of difficulty; one that starts of easy and progressively gets harder as you progress. In may ways, it presents a better arcade experience than its original iteration and has been the mode that I’ve spent the most time on. It adds an element of longevity to the title and coupled with online leaderboards, for both the Ages and standard mode, provides a healthy form of competition as you strive to attain a higher score with each playthrough. Its cabinet features also provide a lovely aesthetic to the overall presentation of the game too. Although the standing cabinet is a standard affair, its replication of the moving cabinet is very effectively done; especially with its addition of arcade background sounds and sights to really evoke those memories of my mis-spent youth.

Talking of presentation, the game does a stellar job of presenting a pixel-perfect replication of the true-arcade version of G-LOC: Air Battle. It simply looks stunning, despite being twenty or so years old and is easily the best version of its style playable within your home, or on the go with the Switch’s portability. Its soundtracks and full audio have been ported over to fantastic effect, from the roar of the afterburner to the shout of ‘fire’ as you attain a perfect lock-on. However, one area where it doesn’t capture the feel of the arcade, is in its control. This isn’t down to the game itself, but largely due to using analogue sticks, or joy-cons, as compared to a fully fledged flight-stick. It just feels a little loose and all-too-easy to fly into an unwanted manoeuvre; especially when flying through the confines of the canyon levels. It’s by no means game-breaking, it’s just not as effective as playing the real mcCoy.

Overall, SEGA AGES G-LOC: Air Battle is one of the most arcade-perfect reproductions I have played. Everything that I can remember from my times at the arcade has been faithfully recreated here, even down to moving cabinets and the ambience of such an environment. Even more outstanding though, is that all of this has been built upon, with a host of customisation options and the ever-addictive Ages Mode to ensure its long-term appeal. Apart from some minor control issues that can make some levels a nightmare to play through, the game is largely a high-octane, thrill-a-minute arcade experience that suits a casual play style perfectly; especially within the Switch’s portable architecture. For me though, its biggest draw comes from the nice pile of pound coins I’ve now got building up, as I no longer need to feed the machines of my youth to get my adrenaline-fuelled arcade fix any more!

It’s time to turn and burn as Sega Ages G-LOC Air Battle takes to the skies in this arcade-perfect recreation.