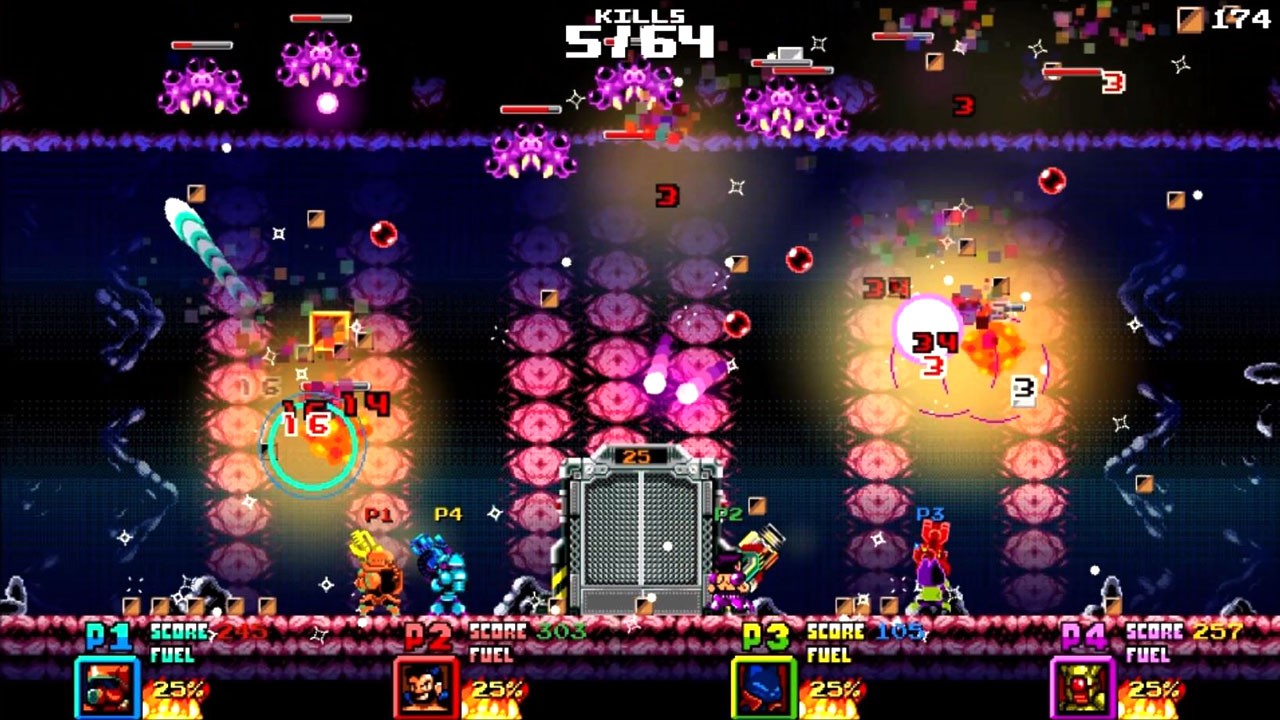 Arcade-style games are sometimes a difficult nut to examine on the Nintendo Switch, or on any console, for that matter. Emulating the sensation and ideas of an arcade-esque game means that certain aspects are inherently inserted that don’t always jive with the console crowd. For example, there may or may not be an endpoint to the game: many arcade titles from the last generation tend to be repetitive with a focus on high scores and wasting quarters. Additionally, you trade off certain aspects for maximum effect, like keeping the storyline light and focusing on the graphics, or sound, or whatever. But you can still get enjoyment as long as the target is reached: creating repetitive but engaging gameplay. For Storybird, the creators of Guns of Mercy – Rangers Edition, the objective is simple: make sure that you’re always blasting away at those damn invaders by any means necessary.

Guns of Mercy – Rangers Edition is an updated variant of a mobile game that was released some time ago, and the objective here is to have injected enough additional content to make it console worthy. The core concept hasn’t changed at all: you blast a ton of baddies that appear on the screen, doing it one stage at a time as your elevator ascends towards stronger and scarier aliens. After all, you didn’t get to the year 20XX without having some difficulty, and these multi eyed freaks aren’t going to leave peacefully. As you move onwards, you’ll eventually encounter some truly massive and monstrous foes, but you should be able to hold them off with your careful shots and brilliant strategies. After all, you’re a Ranger, act like one! And, if you can’t, bring a friend to keep your ass in line! 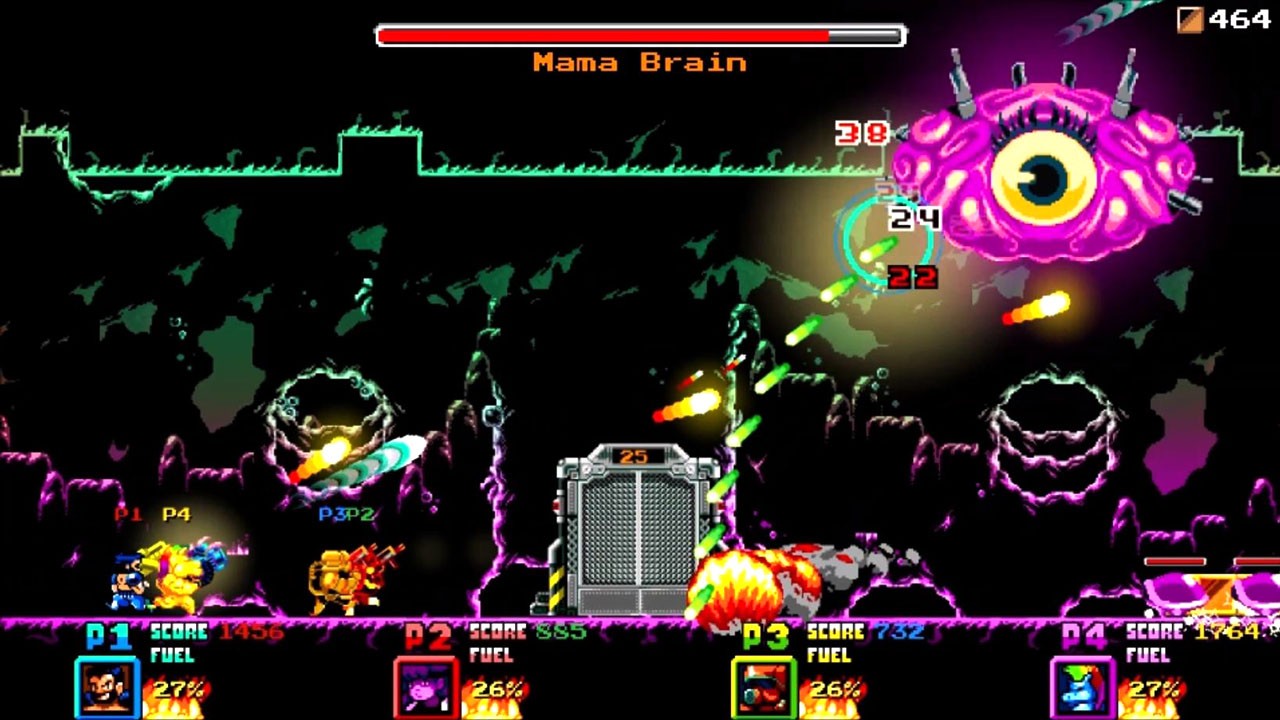 The core gameplay for Guns of Mercy is a simple one. Your gun is on autofire, so all you need to do is worry about aiming with the right joystick to target enemies arriving from both sides of the screen. As you play, the enemies will always drop something in the course of their destruction, usually a small square that represents the currency of the game. Additionally, you’ll get temporary powerups for the level you’re on, things like additional side-turret guns, time stopping powers, or an upgrade to your primary weapon to make it blast like a howitzer. There’s also an ongoing “fuel” meter that fills up through killing enemies and picking up jerry cans of gasoline that sometimes get dropped. Once you’ve got enough fuel, you can summon your Meka, which is a giant mech suit that grants you temporary berserker mode and pseudo invincibility. Oh, right: if you take a single hit, your run is over, so you gotta be careful and you need to be aware of where everyone and everything is as the enemies get denser and close in.

Guns of Mercy is not a game that’s going to break your brain with strategy, and that’s probably a good thing. You’ve got your choice of rangers, weapons and Mekas to decide from, and there’s enough that the multiplayer mode gives everyone a Ranger of their own choice. Starting from the first level, the game can be deceptively easy, and players can get lulled into a sense of passive mindlessness. It’s very similar to Tetris in this approach, where professional players will want to start at higher levels in order to maximize scores and minimize wasted time. Similarly, Guns of Mercy will allow you to skip ahead a certain number of levels as long as you have gems, which is a secondary currency that I’ll mention in a moment. If you have the mind and patience for it, it’s worthwhile to continually start from the base because the drops from enemies are incredibly generous. Not only are the weapon powerups things that keep anything from getting remotely hairy, but you get tons and tons of cash, allowing you to powerup in the shop outside of the main game nearly every time. If you’re addicted to doing the powerup route and maxing out a single character or weapon, Guns of Mercy does provide.

And the game does look substantially better on the Switch than it ever did on mobile. Rather than just do a quick and dirty port, Storybird made some real effort to make sure their pixel dense graphics look sharp and colorful both in handheld mode and docked mode. The Rangers are a bit angular, but intentionally so and not just from sprite artification. The different aliens and monsters all pop with a neon hue, and it’s easy to define and see the individual mobs as they come at you. You don’t get lost in the shuffle, even as you continue to see retro future vibes of what an alien takeover of the planet might look like (definitely think Contra), and I did like the appearance of the larger boss and miniboss aliens, even if it was just a matter of careful manoeuvring to not get squashed.

There are only a couple of annoyances that I had for Guns of Mercy, and those might be more personal touches than anything else. The first is that the tutorial feels like it goes on for far, far too long. I understand that the Ranger in charge wants to make sure I fully understand everything that I can do within the game, but I would have liked him to shut up and let me figure things out for myself much sooner. Too many screens of telling and showing me what I could do with my gun, my Meka, my power ups and such. Also, being corralled into doing those things without the option to simply move on my own accord wasn’t great. There was a moment where I had enough cash on hand to buy more powerups, but wasn’t allowed to enter the store because the commander HAD to show me what I could do in order to use the elevator skip, which was frustrating to say the least. It’s minor, but, when most of the core gameplay remains unchanged, you remember the inconveniences clearly. 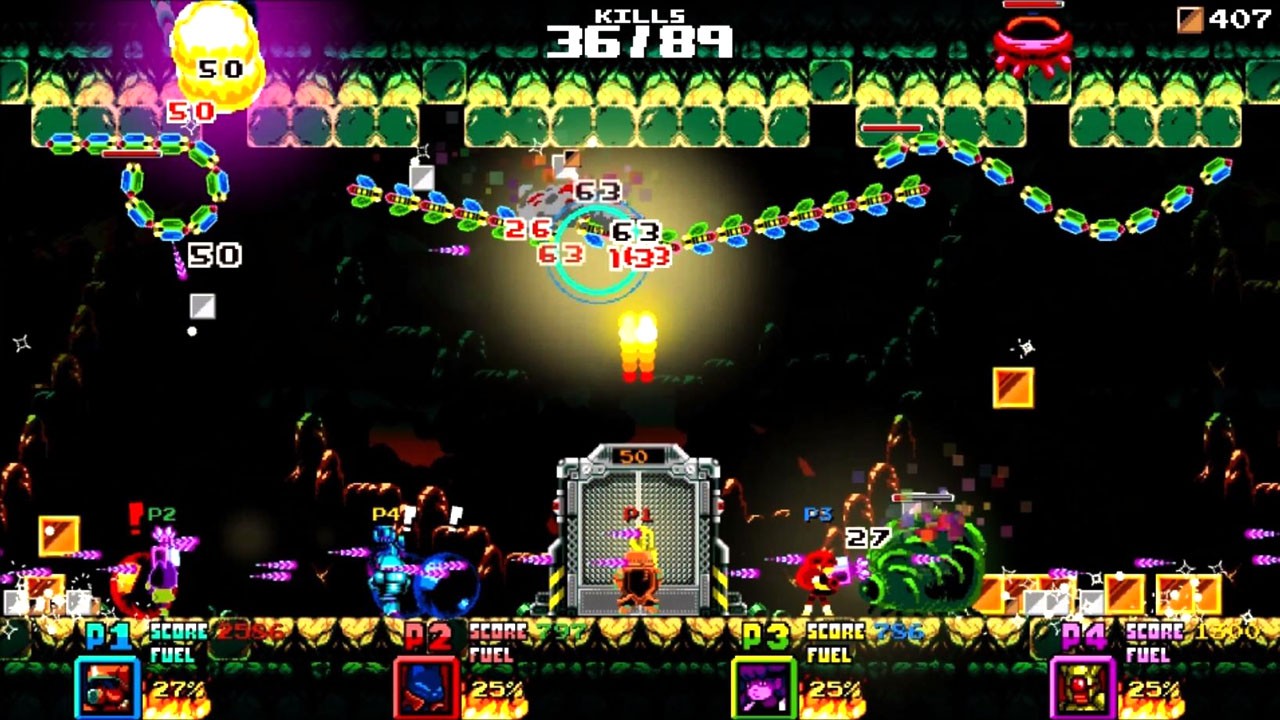 Additionally, Guns of Mercy never really lets you forget it used to be a mobile game. Those gems that I mentioned are few and far between, and are incredibly helpful for making sure certain things spawn or for skipping ahead on the repetitive levels, but you almost never see them drop. Where do they come from? My research says they used to come from In App Purchasing, which, thankfully, is nowhere to be seen within this game. They also come from occasional drops (very rare), or achievements, which almost feel condescending. This is one of those titles that gives you a bunch of achievements for everything you do: play the game two days in a row, buy a new powerup for one Ranger, get to a new level, open up the menu, etc. Then you get cash and gems for doing those things, and it almost feels trivial. Like, okay, I paid 1000 units to upgrade the cat Ranger, and you gave me 450 units as a prize. Why not just lower the price?

Those two points, though, are arguably petty and shouldn’t be used to pan the game as a whole. Guns of Mercy – Rangers Edition has a lot of interesting and entertaining aspects that surprisingly kept me coming back time and again. It’s so easy to handle and to fire all over the place, and keeping up with the kill count requirement to clear a level only requires you to not die and keep moving. While utterly simplistic, it’s a decent time sink that also invites over other players for some real havoc. It’s fun, and it doesn’t try to be any more or less than it promises. There’s not a lot to it, but what’s there – good ol’ fashion arcade shooting – makes it a success.

If Starship Troopers and Donkey Kong 3 had a weird multiplayer pixel baby, this would be it.