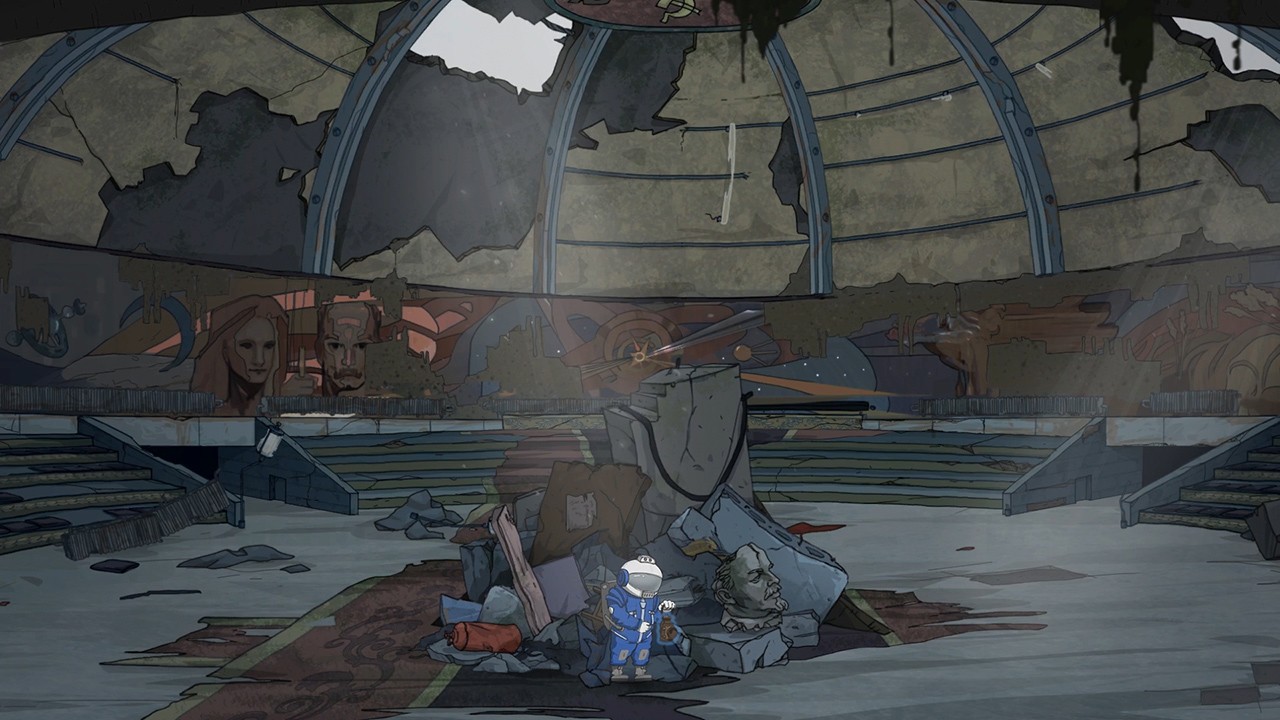 Since the Dragon’s Lair and Space Ace series, I’ve always wanted to play a game that felt like playing an actual cartoon. While it’s not even in the same ballpark in terms of genre and art style, The Great Perhaps is a beautifully drawn side-scrolling puzzle title that feels like a spin-off of an animated movie or similar. The graphics, though at a fixed angle, are brilliant and makes me wish that there were more possibilities to explore this gaming world rather than through its linear experience.

The Great Perhaps has you playing as unexpected time traveller Kosmos, who stumbles upon a time-travelling lantern on his return to Earth many years after an apparent world-ending event. Assisted by the AI from his space station – a typical sarcastic drone that follows you about and provides the odd hint – Kosmos realises that he may be able to alter time with this new-found device to prevent the catastrophic events of the past and find his way back home (the last bit was added to sound a bit like Quantum Leap). He does have genuine investment in his task; other than saving all humanity he may just be able to undo time to be with his loved ones, and that perhaps is the hook required to bring Kosmos out of his mental slumber. 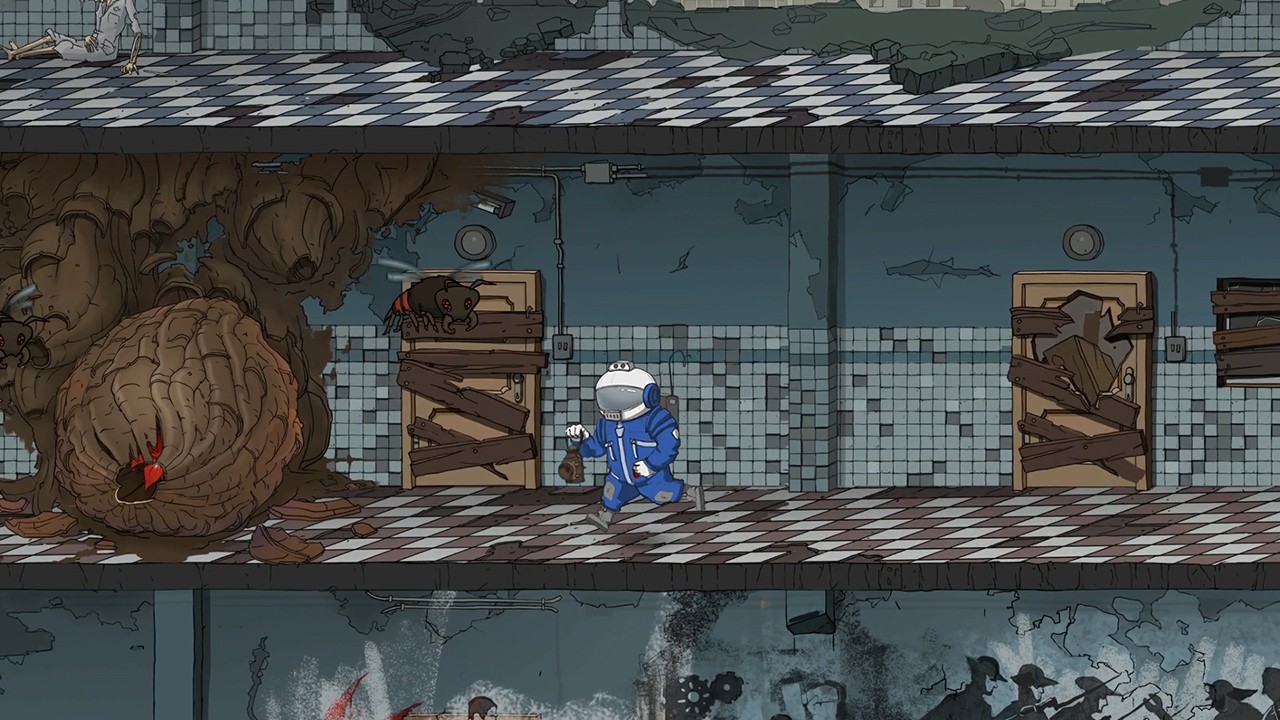 While the game takes place on Earth it does feel like it’s on another gravity-defying planet, but that’s due to the animation. The visuals are so good that uniting them with a fluid experience is a little janky. Kosmos can move left and right with the left stick, jump over the odd obstacle and carry one item (other than the lantern) at a time. The only reason I bring this up is it broke the spell that I was playing a game as the world you inhabit is that great. In the present day there is no sign of life, only dull greys and sepias, and it feels like watching an abandoned building documentary as it’s lifeless but equally haunting. Switch on the lantern however, and it literally lights the scenes up; see the citizens going about their daily lives before the looming event who are acutely aware of the spaceman parading through their neighbourhood, see areas lit up and lush vegetation meeting with the urban environments. It feels like a Disney picture in comparison, and the ‘it was just a dream’ effect as you flick the switch on the lantern and confront the reality is quite sobering.

The lantern isn’t just a device to depict where the past and present (or is that future?) meet  for storytelling purposes, but for problem-solving too. Where one doorway may be blocked through a collapsed wall in the present, it could be an open path in the past, and this game mechanic is initially fantastic to use as you switch back and forth. Time travel isn’t a favourite subject of mine as it gets so complicated, but in The Great Perhaps, it’s accessible without dumbing everything down. It isn’t without its problems of course, should you wish to ‘teleport’ to an alternate timeline where there is impending doom. Death is present in the game, and if you aren’t careful, can see Kosmos whisked from safety to a volatile environment where an oversized shadow chases you. 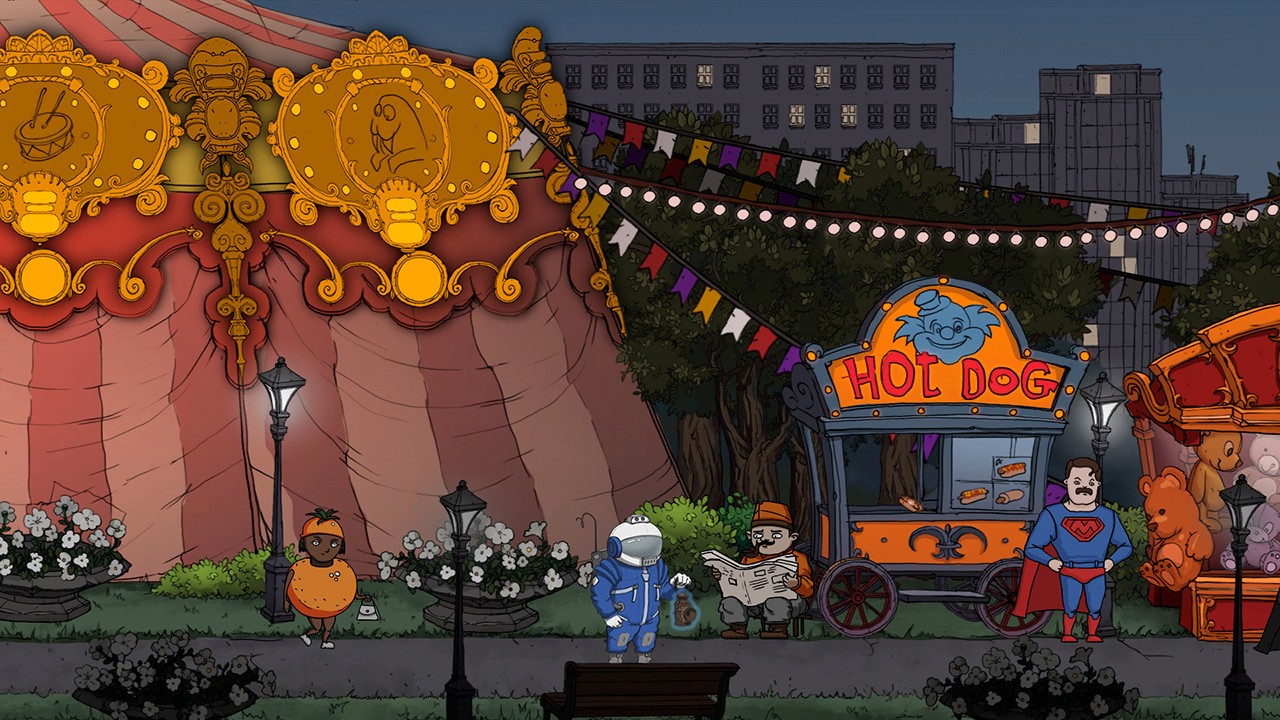 For an end of days title there’s a good deal of humour in the game, and while it was witty enough, the delivery wasn’t the greatest. Though the voice acting isn’t on par with similar titles, the score takes the crown as a good distraction piece as it’s both haunting like the abandoned dwellings, but compelling enough to tempt you to explore that little bit further. For Kosmos, he has been trapped in isolation for at least 100 years through stasis, and here he is walking a route of further solitary confinement with no signs of life. One aspect covered early is his apparent disregard for his life and, while understandably dark, it’s an interesting take on the story, but it seems to get diluted in the short running time of the game. He even meets another character with the same mindset, but it’s never explored fully and feels a little bit dismissed. It’s not straying too far off the themes, so would have been a good addition to dive deeper but it’s overlooked.

Some aspects of the game are a little similar to classic point and click adventures in that you complete a lot of fetch quests with plenty of backtracking. With the time element, it adds a bit more to the depth of the game and exploration opportunities too. The puzzles are a mixed bag; often they are straightforward enough, but they follow a similar pattern of rearranging parts or shifting back and forth in time to move one object to gain access to another. There are a handful of frustrating moments, but never enough to dissuade you from sticking it out and the playthrough duration feels like watching two films back to back, or a few TV series on Netflix or similar and you’re done. Will you come back to it once finished? As this is for the Switch, there’s no incentive for the trophy side of things, so I would wager that the reasoning behind playing it again is to revel in the gorgeous scenery, appreciating that there are two variations of every hand-drawn scene and rather than feel like you’re playing a cartoon, more like an illustrated storybook that has come to life.

The pretty short completion time and lack of exploration on both Kosmos and the world he inhabits dampen the experience a little. Visually it’s stunning, and the controls are easy for anyone to pick up. The lack of inventory, while restricting in terms of options, makes the game much more linear than a typical adventure.