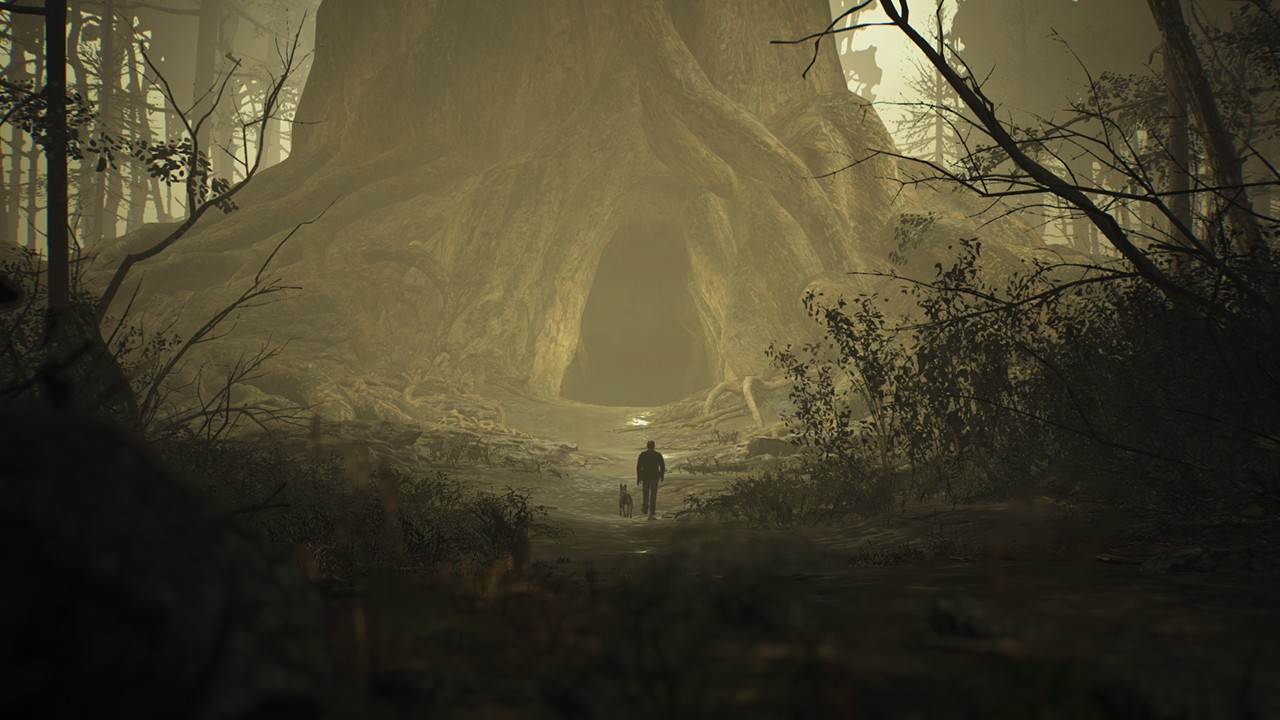 The Blair Witch Project, a now infamous movie from 1999, is such a case of lightning in a bottle that it was the best example of “right place, right time” in film creation history. You could never get away with a viral campaign nowadays where information is disseminated in just the right quantities to get people curious but not reveal the truth. It was the hype of this found footage flick that propelled it to massive profit margins, and the subsequent sequels to the story were, well, pretty poor in comparison. Okay, let’s be honest: Book of Shadows was bad because it tried way too hard and because everyone wanted this to be a franchise when the director clearly did not. The 2016 rebirth, simply entitled The Blair Witch, was actually pretty decent, and does a better job of giving life to the world of the Blair Witch instead of merely trying to insert another spooky premise into the world. Strangely, Lionsgate Games (they have a games department?) decided, years later, to double down on the original with the creation of a game that is the most direct sequel to the original movie. There’s a lot to unpack there, but the path is clear: the films, in spite of critical disdain, have always achieved positive sales, and why not make that work with a decent video game? Thus the Nintendo Switch now joins the creepy path through the woods to find the Blair Witch.

Blair Witch takes place a couple of years after the original movie, but the movie took place in 1994 (found footage and all that jazz), so this should be somewhere in the mid-90s. In the game’s universe you play Ellis Lynch, an ex-police officer who is now heading into the deep and dark woods to search for a missing boy. You aren’t travelling alone, however; you’re bringing your dog Bullet, and people who love the importance of animals in their game are in for a frigging treat with this one. Anyway, Ellis is looking for this missing kid who definitely has nothing to do with why he isn’t a cop any longer (IT TOTALLY DOES) when he suddenly finds a video camera and blacks out. When Ellis comes to, the game really begins as we start to face the massive, insane fear that is being out in the woods where you know the Blair Witch may or may not be hiding. 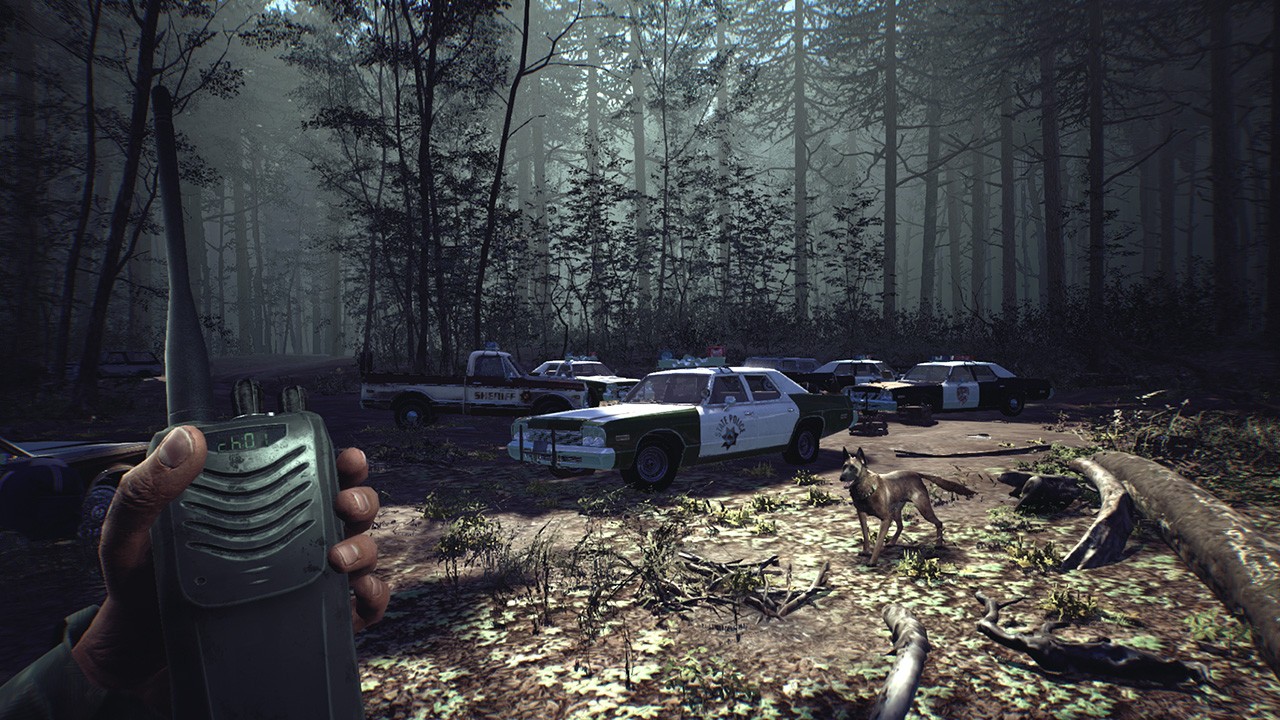 The gameplay of Blair Witch is first-person, psychological horror with very, very minor points on survival through combat-like scenarios and a huge focus on purposely obtuse gameplay. Giving you a field that’s somewhere between exploration and path finding, this semi-open world really boils down to three important factors: finding items, time manipulation, and dog-petting. The finding part is easy, as it should come naturally to anyone who’s played a FPS game that also asks you to unlock doors on occasion. Since a small circle will highlight when there’s an item you want to grab, and arrows will direct you in the general direction of where to head next for the story, this part shouldn’t be too hard. Hell, this is the easiest part of the game: go where it says to go, find the creepy drawing that the kid left discarded by him being kept prisoner by some horned beasts, flip it over in your hands to try and find additional clues that may or may not trigger more dialogue. Oh, and feel free to be a dick whenever your phone rings: sure, answering it directly affects the outcome of the game, but there’s some odd satisfaction in knowing the game has dialogue for you to hear, and you’re telling them “no, it’s not important”. Bad endings might be ahead, but who cares, it’s hilarious.

The ‘red tape’ system of Blair Witch I found straight-up frustrating. There are these red tapes that you discover that show events and moments from the areas around the woods that happened ‘sometime,’ and these tapes are then are able to manipulate time and space depending on how they sync up. So you fast-forward through a tape to when there used to be an item on the ground, and boom, now there’s that item. Or you copy the movements of people on the tape, and now new pathways emerge. For whatever reason, this wasn’t really clear from the drop, and it just got more confusing every time I had to bust out the tapes. Thankfully, this game has existed for some time, so there were a couple of small walkthroughs that gave me indication on how to do things when I was totally lost, and it also gave me those “oh of course” moments that made me regret looking up the answers. Seriously, am I bad at games or just impatient? I figured out that frigging train car/cart thing that Ellis needed to drive. Why was the camcorder such a chore?

Blair Witch has a huge push for you to keep Bullet on top of your list. This was a lovely, exciting part of the game that was only hampered slightly by the game itself. Bullet, being a good boy, is an all purpose dog who is the backbone of the entire game. When you need to find things, Bullet will seek them out. When you’re about to be attacked by demons from the dark, Bullet growls to show where they are and lets you shine the light on them before you get killed. When Bullet does well, you give Bullet pats and scratches. When Bullet isn’t doing so well, you can reprimand him, but why the hell would you want to do that unless absolutely necessary? Also, if Bullet wanders too far away from you or you get separated, you are far, far more likely to go completely insane from your PTSD and, oh yeah, the goddamn immortal witch living in the forest. Bullet is the best actual gameplay mechanic in the whole game, and it’s great that he’s customizable as you set out, and I wished he looked just a tad better. 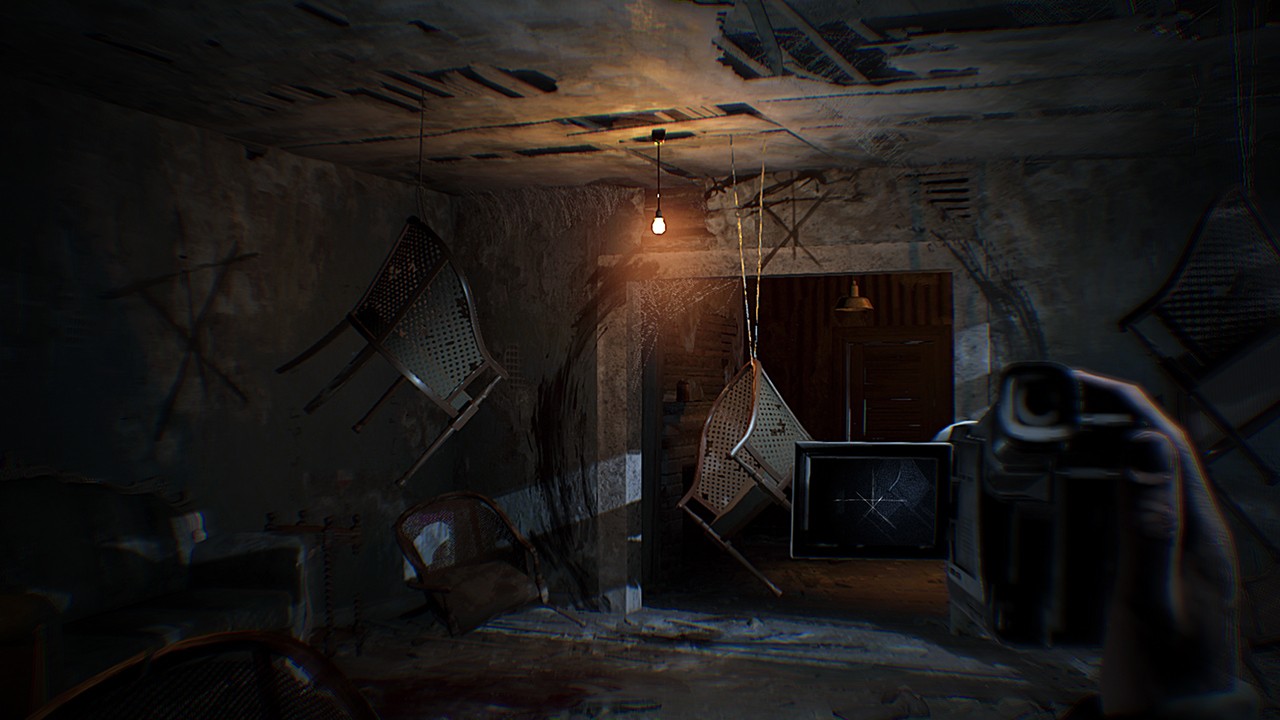 Fans who have seen this game being played on other consoles or on a maxed-out PC should be aware, for the umpteenth time, that the Nintendo Switch is simply not capable of that level of graphics. Frankly, I don’t think Nintendo is ever going to be on the level with current generation consoles for certain AAA aspects and designs. It simply isn’t going to happen, and it sucks to some extent, but I’m also fine with it. Naturally, this does rub a bit raw when you encounter games like Blair Witch that have been released elsewhere and appear cinematic and gorgeous. That’s not to say that the Nintendo Switch version of Blair Witch doesn’t look good: in fact, it looks downright fantastic when you’re in the correct spots and have the right moments. For example, when you’re in the daylight, and you’re trying to look at the details of things through sun-dappled trees and observing the way that the skin was peeled off someone’s face? Yeah, kind of rough, not gonna lie. However, when you’re in the dark, trying to not get murdered to death and you’re constantly relying on Bullet to direct you where to go, the game pops well.

What’s crazy is that there’s a lot of really, really good game hiding underneath a veneer of optimization issues and some glitchy bugs. The storyline of Blair Witch is fantastic, giving actual substance to how the Blair Witch world could unfold without purposely retreading old tropes or lore. Ellis is a complicated, tortured man who has a lot of memories and issues that he is forced to face in the woods while also confronting the fact that actual evil exists and is here, hunting him and probably eating a small boy as we speak. The soundscape and voice work are top-notch, immersing you in a world of tension, anxiety and fear. Watching the world contort and warp around Ellis’ life and make him begin to question what is and isn’t real, what the truth could be and what is just the lie he tells himself, and how Bullet seems to be his only tether to the real world. So when the game bugs out and Bullet freezes in place, or is only able to half perform his task because he suddenly disappears, it takes you out of the atmosphere of the game and really reminds you it’s just a game: there isn’t a real danger, and the scariness dissipates.

Players can look forward to a long afternoon (or a nice, creepy night) with Blair Witch, but don’t expect longevity just from the game itself. You have several endings to get to, all of which can be obtained by simply thinking about the right and wrong things to do in most situations, plus making sure you’re keeping track of Bullet. If, like me, you like to make your whole gameplay experience feel surreal, stop in the middle of the exploration, in the dead of night, while you know a ghostly witch demon is hunting you, and play a few minutes of Nokia-era cell phone games on the phone Ellis carries. It’s such a wonderful little extra, the complexity of his cell phone, and it shows the details that exist within the game that you can pick up on with enough time and patience. No, this isn’t going to look as good as it does on your friend’s PS4, but it still gets the job done, and it’s better docked. Bugs and glitches are definitely case by case, so here’s to hoping for a general ironing out of the game and then bringing it to a wider audience in the near future. I had a blast, and I think other fans of the saga (and first-person psychological horror games in general) will too.

Spooky, suspenseful, full of lore and gore; this incarnation of Blair Witch stands apart from recent film versions, though it still has its own demons to face.