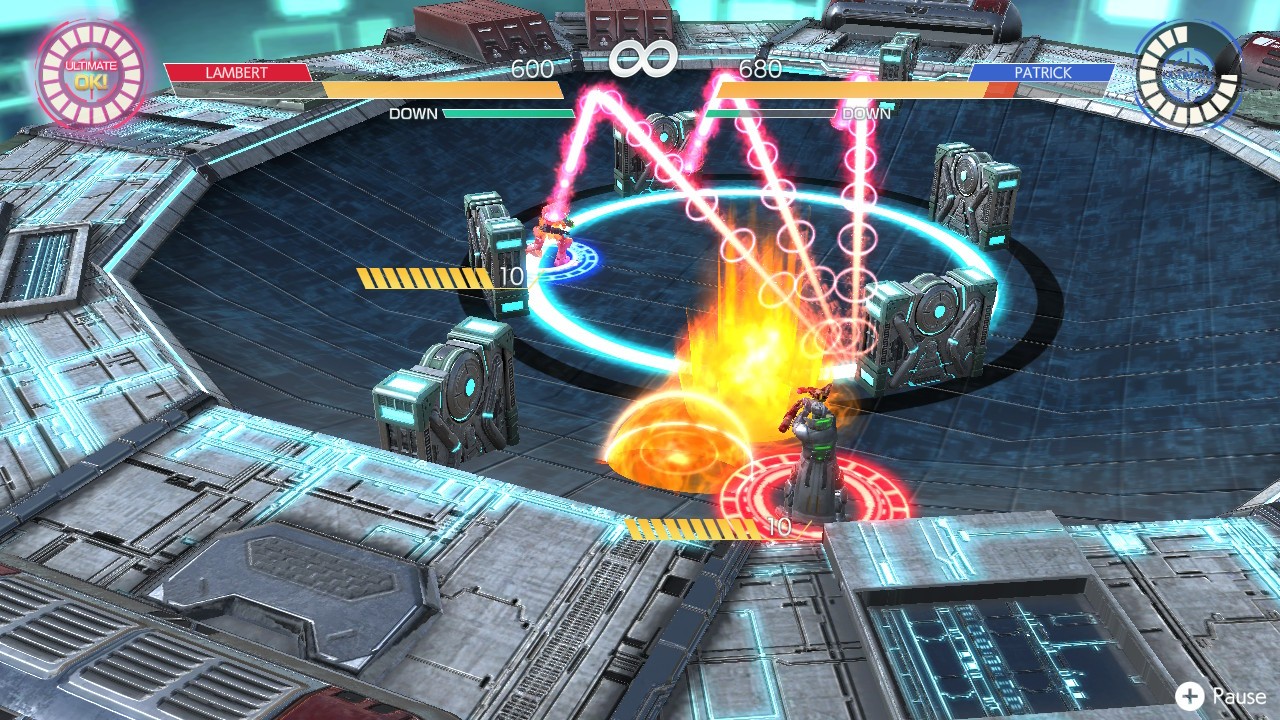 Developer Thousand Games have taken a familiar formula to build a frantic and fresh arena battler. In Synaptic Drive, superhuman soldiers and heroes of all kinds clash for glory and riches far in the future. These combatants come from all over the galaxy to activate the synapses in their brains in partnered battles. The “Synaptic Drive” pairs two fighters so they can achieve new feats previously unobtainable alone. Thousand Games diverse roster joins together to unlock faster reflexes, skills, and new abilities within their mechanized bodies. The story reasons for this intergalactic showdown are interesting, to say the least, but strangely this key mechanism, and awesome lore, do not appear in most of the game modes.

To find the facts of their universe and any kind of story, you must dig into a few different menus. Many of the single-player arcade challenges features one fighter sans the synaptic connection/drive, the game’s namesake, but the gameplay remains the same with unchanged mobility. This was somewhat of a letdown in the lore department, but the game is still very fun from a player perspective. Let’s dig into some of the systems, when it comes to multiplayer, local, or online this may be the fighter for you, but if you’re looking for a robust single-player experience and a story, you might want to drive the other way. 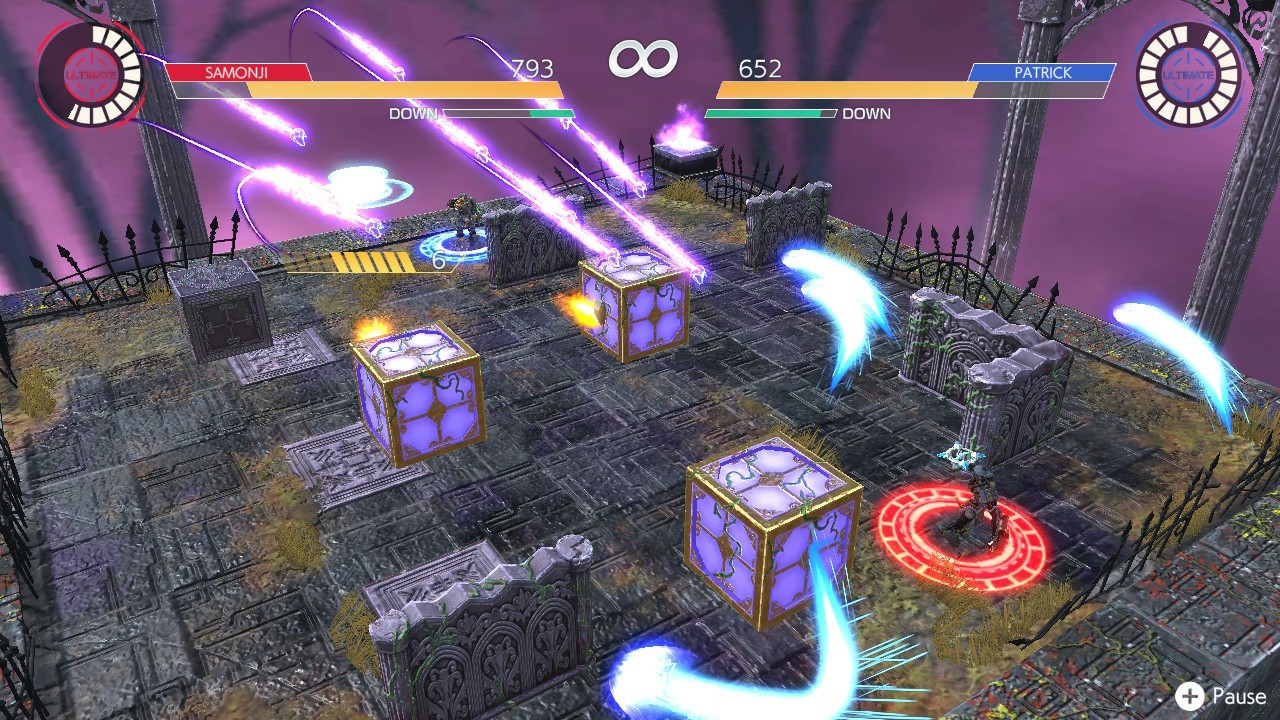 The core gameplay is reminiscent of Custom Robo. In this world cyborgs, space lizards, super buff prisoners, and robots fight for renown and prize money. A true arena fighter through and through. Synaptic Drive has many square arenas from large to small. These battlefields are a mix of Tron-like future fields to crumbled temple ruins. From a top-down isometric angle, players bob and weave around mini paintball like fields. The arenas have moving walls, conveyor belts, and destructible blocks. While none of the stages truly stand out from the rest, they do a great job of serving a purpose. These levels are made to reinforce the fun of the in/out cat-and-mouse style to the game’s combat.

Combat features a wide variety of guns, missiles, and more. To be specific, players can unlock and adjust different Bodies (your character, melee, and jump), guns (with charge attacks and ultimates), wires (more on this in a moment), enhancement chips, and homing missiles. That’s what struck me most about Synaptic Drive, the sheer amount of weapon variety. There are so many ways to attack that I sometimes forgot I could do most of them in regular play sessions.

Each button on the Joycon is used for something different, with wires being the best and worst of them. I’ve dominated and failed hard, trying to aim wires at my friends. What happens is your right thumbstick fires out a projectile that can be detonated on command. I had trouble aiming them and getting the explosive timing right, but I don’t blame the game for this fumble. I blame the Switch’s slow thumbsticks and my inability to curve the bullets. In all honesty, there may be too many weapons. It can be a little overwhelming when you see all the options. I will say there is a fair amount of excitement to the trial and error of building the perfect loadout. Some armaments are weak, but that all comes down to personal preference. A laser I might think is useless could be someone’s favourite kind of shot. Missiles are literally hit or miss, with lower and higher homing stats and varying types of explosions. All in all the choice in combat is the strength of this game and it’s the largest source of strategy and the main reason to play. 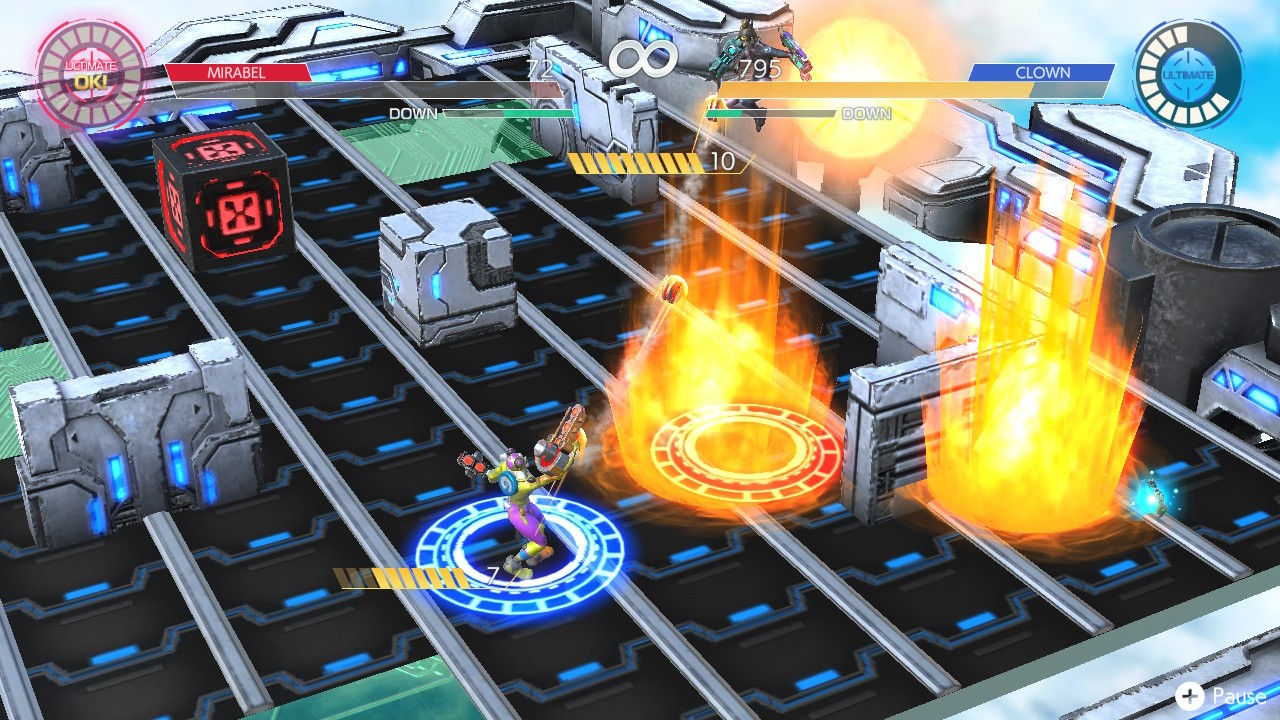 Synaptic Drive has modes, including the regular online and offline modes you might expect. As the lore states the 2v2 battles are the star of the show, with an interesting tag-team system. Choose two full character load-outs and you can swap between them on the fly or after the meter changes up again. What’s cool is if one dies you’re both done, because of the synaptic connections. For single-player, there is a host of challenge courses from freestyle to set weapon challenges and the most interesting of all the limited weapon modes. Limited weapon mode removes the items you use in one battle from your loadout selections as you proceed through a series of five battles. This is what I found the most challenging and rewarding until I fought real people. Thousand Games require all players to complete a few single-player challenges before they can hop into online battles; there are also local play battles for up to four players via the tag team mode.

Speaking of players, let’s talk about some of the characters you’ll play as in Synaptic Drive. Samonji, the robot ninja, was my favourite from minute one. Lambert is what I’d guess is a cyborg in this world with some trench coat Neo vibes mixed with the X-Men character Cable. Mirabel, the princess paired with Samonji is a little generic and so are the names of these next combatants. Patrick is an Alphonse from Fullmetal Alchemist looking robot, and William (seriously, that’s the name of this intergalactic robot) has a chest piece that laughably looks like a kitty cat. Round that out with Rex a Lizardman meets Killer Croc type, Balmung is a swole/scary looking prisoner, and Clown, a thing of horrors. There are more unlockable bodies, but to find them you’ll have to level a bit. On an unrelated note, Dear Thousand Games, please throw Clown into an endless pit in a future update so I never have to see him again. Thanks.

As for critiques, this game is exactly as advertised, an arena battler with quick strategic combat. If the AI is too weak for your tactics, take the fight online, or challenge friends on the same couch. If you’re a fan of Custom Robo and games like it, there is a lot to love in this package. The music is fine, not too thumping, but never in the way. I wish there was a little more fanfare to weapon unlocks as you level up, but this isn’t a story-heavy game. The sheer variety in weaponry leaves me ready to play more. Where Synaptic Drive shines in multiplayer, it lacks in lore, but for an online and local play game that’s kind of the point. Thousand Games haven’t reinvented the wheel, but it has built-in plenty of replayability in this diverse fighter. Hundreds of years in the future, Synaptic Drive succeeds at bringing blood and fun to cyberspace.

Synaptic Drive succeeds at bringing blood and fun to cyberspace.