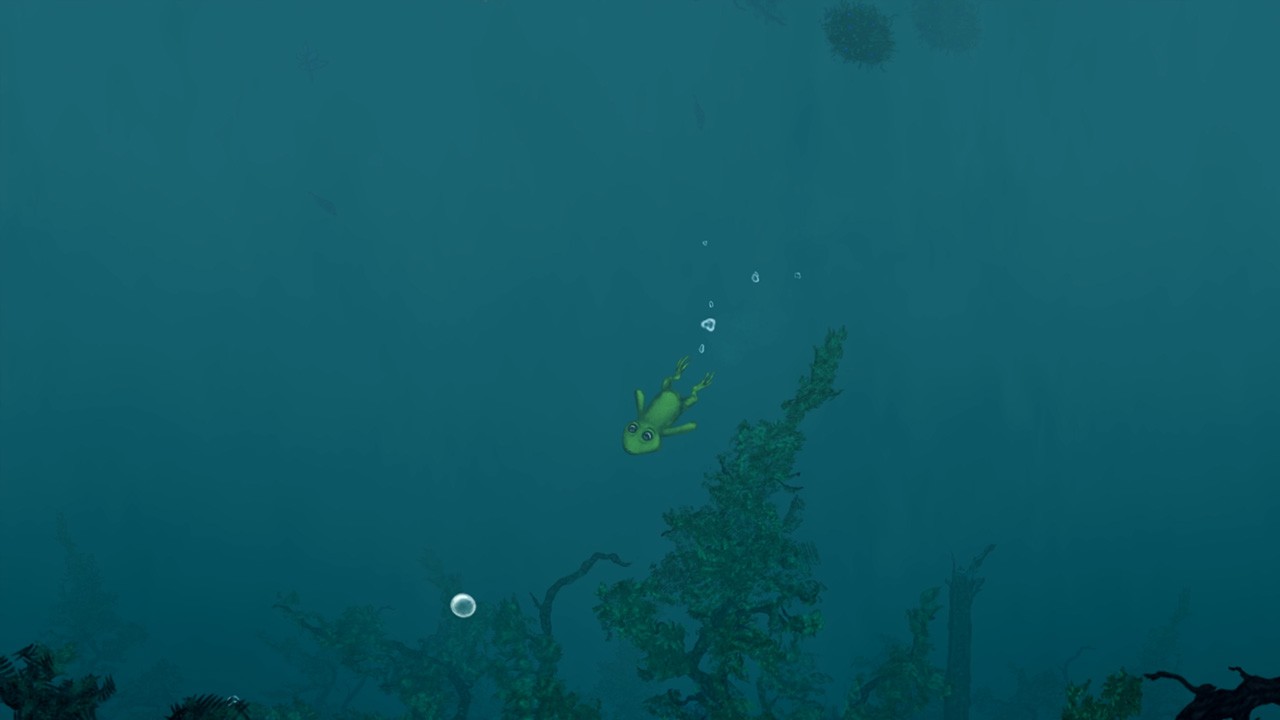 I’m so glad I didn’t play this with my daughter.

My daughter loves frogs. Loves them. We got frog stuffed animals, frog sheets, a few toy frogs and a few frog statues. Her mask, the one she needs to go out into the world, is decorated with frogs. One of her greatest joys in life was being able to see the frogs that live in her uncle’s pond and trying to catch one, and she was totally okay that she couldn’t. She thinks frogs are cute, and she thought the frog on the icon for They Breathe also looked cute. “But he looks sad,” she said, and so I hesitated. I decided not to let her watch me play this indie game from The Working Parts, and everything said this was to be a short game. I know it said horror, but my kids both thought Hello Neighbor was hilarious, so there wasn’t a hard and fast rule about other scary games. Still, I took the point with They Breathe.

Holy crap, I am SO glad I didn’t play this with my daughter.

Starting out, They Breathe is an indie game that is described as “horror,” though definitely not in the traditional sense of the word. There’s nothing here where I’m concerned about jump scares or some kind of eldritch evil that’s trying to drive me insane. Instead, it’s a very real sense of survival and the understanding that life is very, very wrong right now. You play an adorable little frog who is cast into a world that doesn’t have any clues as to what the hell is going on. You swim down, because what else can you do? As you swim, you need to piece together what it is that needs to be done. Bubbles float up from the depths below, and I instinctively swim to them, inhaling oxygen and keeping myself alive. You encounter some poor fellow frog, who appears to have nearly passed out from lack of air. You quickly figure out that you can push him around, and nudge him to other bubbles, making sure to still grab air for yourself. He gradually turns back into his old green self, and swims to the surface. You smile: things are going well. 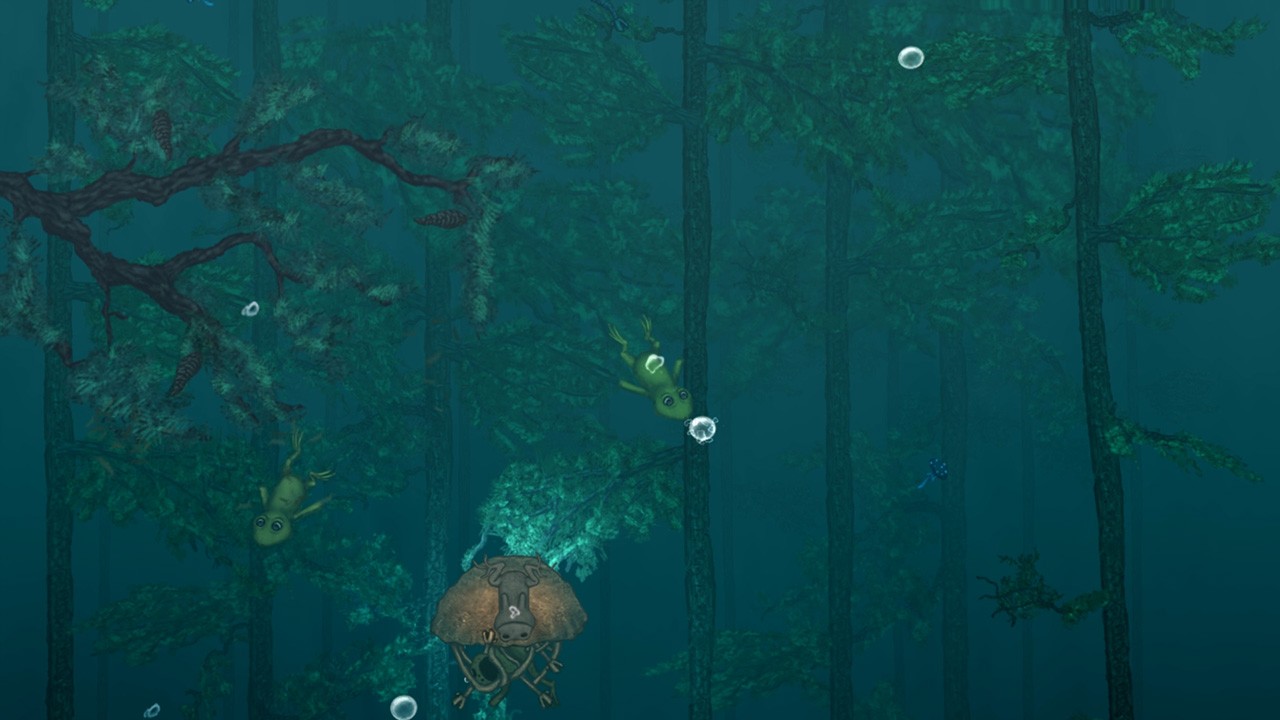 Then the monsters appear.

Suddenly, awfully, the stakes and the approach of They Breathe shift, and survival takes on a whole new perspective. These monsters are like a combination of beasts and jellyfish, each sporting what looks like a frog decoy on their body, though whether it’s an evolutionary growth or a demented attire constructed from your fallen comrade, who’s to say. The beasts prowl after you, and they will electrify you upon touch. Touching you tends to excite them, as your gasp releases oxygen, which fuels their manic energy and bloodlust. Getting hit once usually means getting hit again and again, barbarically murdered off screen as these hell fish whip into a frenzy of mayhem. In a short, hurried but utterly terrifying moment, the frog is dead, and you need to start from the last checkpoint which was just before the monsters appeared. And they will not appear only once.

They Breathe sets impossibly high stakes for what you need to do in order to survive, and it’s both brilliant and brutal in pacing and execution. As you continue forward, you encounter more frogs to save and more beasts to avoid, as they will, eventually, swim off if they can’t have you. But doing both at the same time is a difficult feat that you’ll be tasked with again and again, with the consequences weighing on your froggy conscience and also in the gameplay shift. If the beasts get the frogs before you’re able to resuscitate them, that signals to their fellow jellyfish that meat is on the menu, and future waves of enemies will be even worse, larger and more aggressive. Saving the frogs prevents this, keeping the numbers down and also helping you work towards a perfect ending, which many will not get on their first pass through. Don’t worry: They Breathe clocks in at around a half hour, even with several game overs, so you can certainly achieve perfection with time and effort.

Despite such a simplistic idea, They Breathe is a fascinating and impressive experience. The hand-drawn artwork of the frogs, the foes and the murky, watery landscape help lend so much credence to the creepy atmosphere. It doesn’t feel like the lifelike ocean simulation titles: it feels like a terrible swamp dream that some poor amphibian is reliving over and over. The horrifying visage of the frog bodies strapped to the front of the monsters is very real and even gives fleeting moments of macabre comedy. When they swim upside down, there’s a moment they appear like Far Side style cows, and I thought of them as such until they came in for the kill. If you’re resilient enough to make it to the finale and the massive, Cthulhu-inspired boss that awaits in the deeps, it’s fascinating to see the different forms it takes as you continue to struggle for survival. 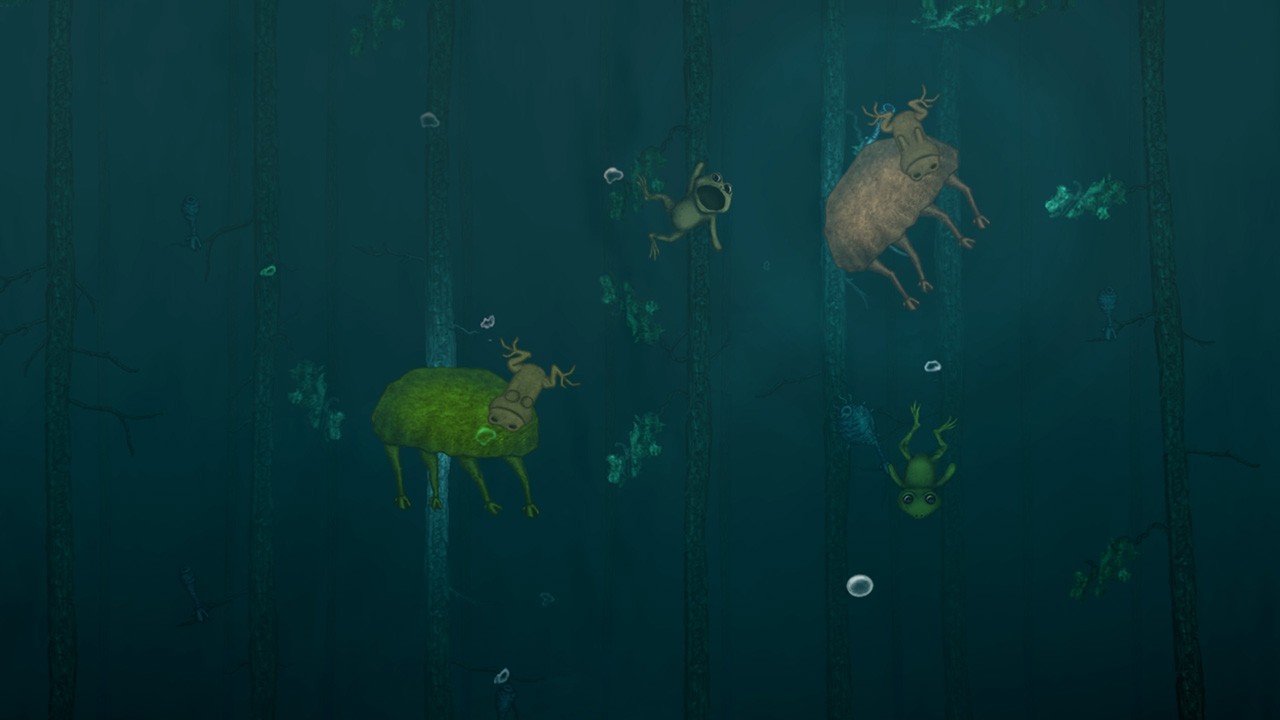 The soundtrack of They Breathe is what really seals the deal. Instead of opting for a continual musical score or bare silence, there’s this constant, omnipresent sound that feels environmental, like what I imagine your brain cooks up when you’re being thrust into the dark and the wet for deeper than you can imagine. As you go, there’s this awful sound that shows just how bad things have gotten, like the groan of a ship hull that’s under too much pressure, but like its echoing through the surrounding water. Like there’s terror and horror just about to burst, but you can’t see it until it’s nearly on top of you. These sounds chase each other, compounding and creating larger levels of madness, never overwhelming you with layered noise, but certainly giving you a real sense of anxiety. It’s brilliant.

For a game to take such a simple concept – save frogs, don’t get eaten – and elevate it to the proper slotting of “horror” is truly impressive. They Breathe induces as much terror and stress as some of the better horror titles I’ve played, and really reminds me a bit of what some Japanese indie titles can cook up, only from a totally different perspective. While arguably short, the game itself is well made and memorable, and honestly seems worth the price of admission. You’ve got multiple playthroughs ahead, and a combination of skill and dumb luck will bring you safely back to the surface. Absolutely recommended.

While arguably short, the game itself is well made and memorable, and honestly seems worth the price of admission.