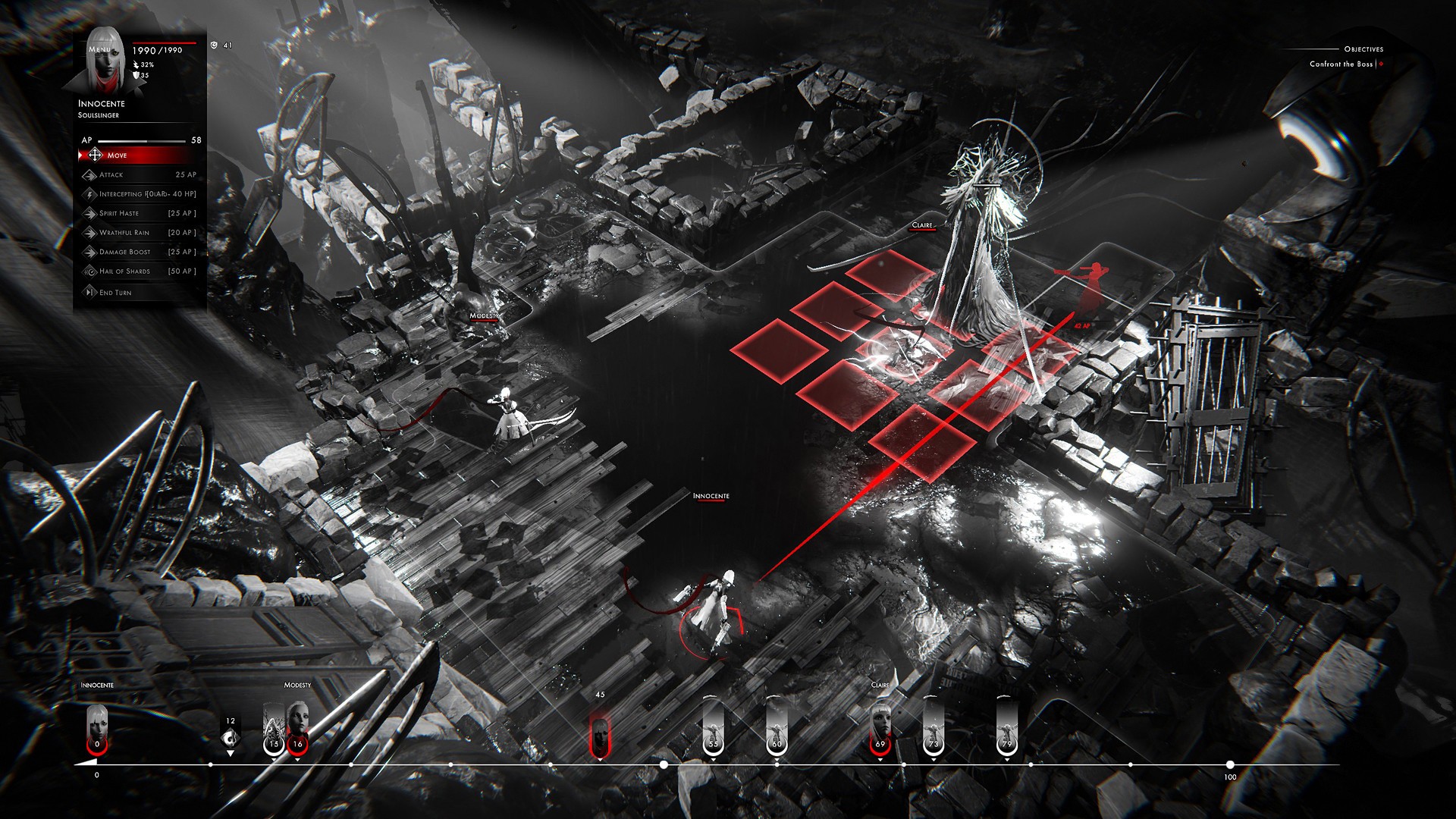 Othercide is a turn-based strategy title with a darker approach in terms of theme. Othercide was developed and published by Lightbulb Crew and Focus Home Interactive. Focus Home Interactive has published many titles such as Hardspace: Shipbreaker, Vampyr and The Surge! Othercide has also received many positive reviews for having nice graphics and a deep atmosphere. Along with the nice settings, which Othercide offers, there will also be challenges for you to overcome! For me, Othercide was like a bag of candy. By that, I pretty much mean that I personally don’t enjoy all the pieces inside the bag. There are some good pieces here and there though, and I am optimistic about this one!

When I first played Othercide, I actually had no clue what was going on. I was greeted with a title screen and what I witnessed seemed to be like a group of ladies looking quite similar to one another and one of them was disembodied. Before I got to play Othercide for real, I was asked whether I would like to go through a tutorial. Like any new player who isn’t familiar with the game would do, I thanked yes to a tutorial! I quite didn’t grasp the entire story, but from what I have seen and heard, this is pretty much what has been going on. You will take the side of Mother and her so-called “Daughters”. You will take part of a battle that has been going on for a very long time against the foes known as “The Other”. It is your duty to make sure that the veil stays protected at all costs. When it comes to the gameplay of Othercide, it might overwhelm at first until you get a grasp of the basics! I would like to give praise for the UI, mainly because the simplicity and the choice of colours really matched with the setting of Othercide. After all, Othercide comprises the colours; red, grey, white and black. And the colours have been used in a really clever way when it comes to execution of the surroundings. It truly makes Othercide feel unique when you compare it to other turn-based titles! I would also like to point out the character design for being really stylish when it comes to both allies and foes. What I also really like about the enemy design is that they look quite bizarre due to their odd shapes and their shades of black and grey. It truly makes the foes look unsettling! 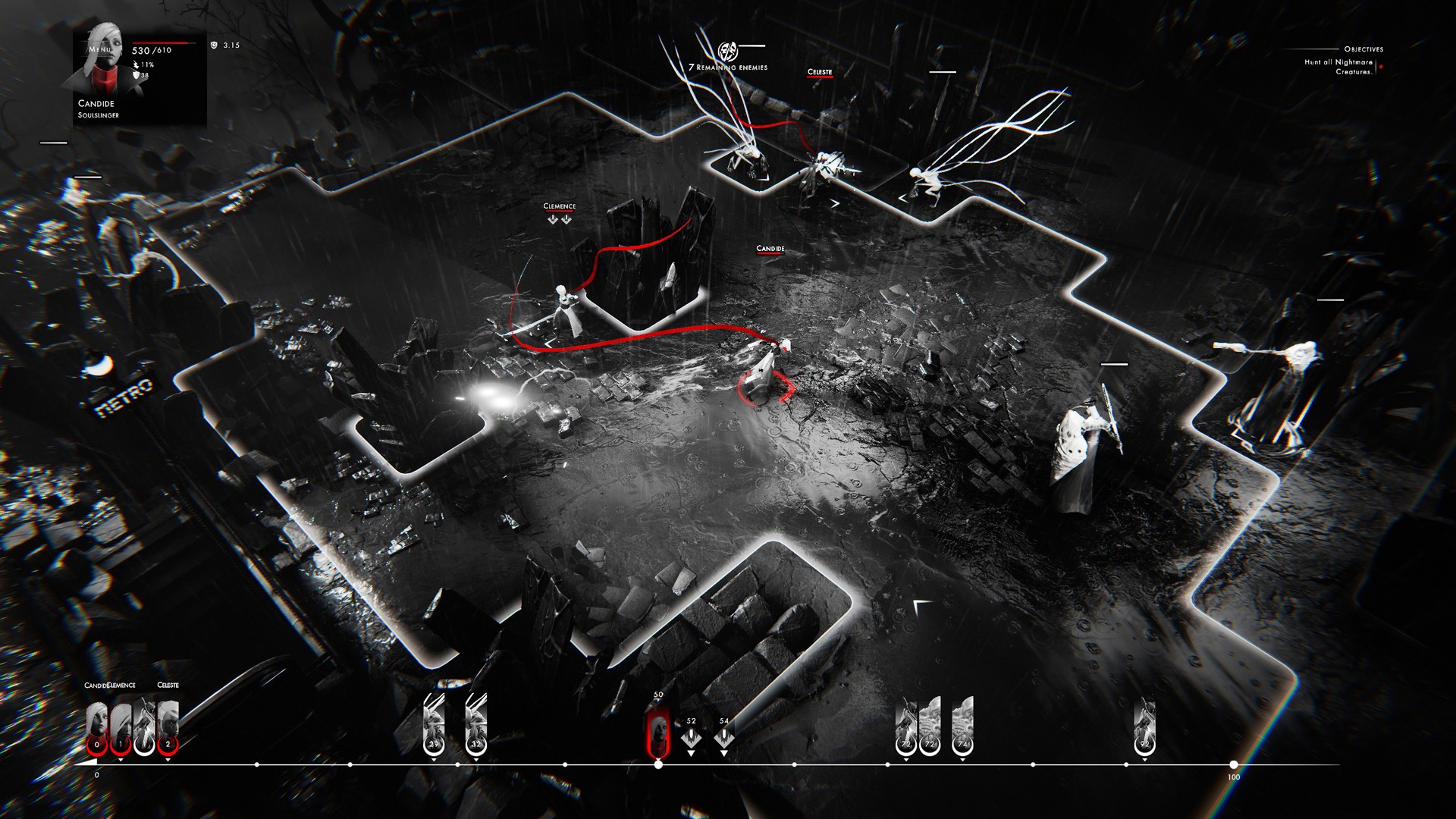 You also notice that the characters can be moved around by selecting your desired tile. Other than that you will also have access to your health points and your action points, AP for short! By moving around, you will consume AP, and that will drain your gauge and limit your actions per round. Whenever you plan to attack an enemy, you will have to use up a heavier chunk of your precious action points in order to perform the attack. So Othercide will reward you for doing smart actions on the battlefield. One of the most important things to keep track on while in battle is the “Timeline”. The “Timeline” is a good way for you to keep track of what unit is next in line. Put in mind that it will only move once you have ended your turn. So whatever unit is to the left and lands on the number 0 will be the one up next! There are also skills that are powerful compared to ordinary attacks, but it will require you to end your turn immediately since the effect will activate later on in the timeline. If you by any chance encounter a foe using such skill, one way to approach it is to counter-attack! The counter-attack will cost you health points in exchange for delaying the attack of the enemy. 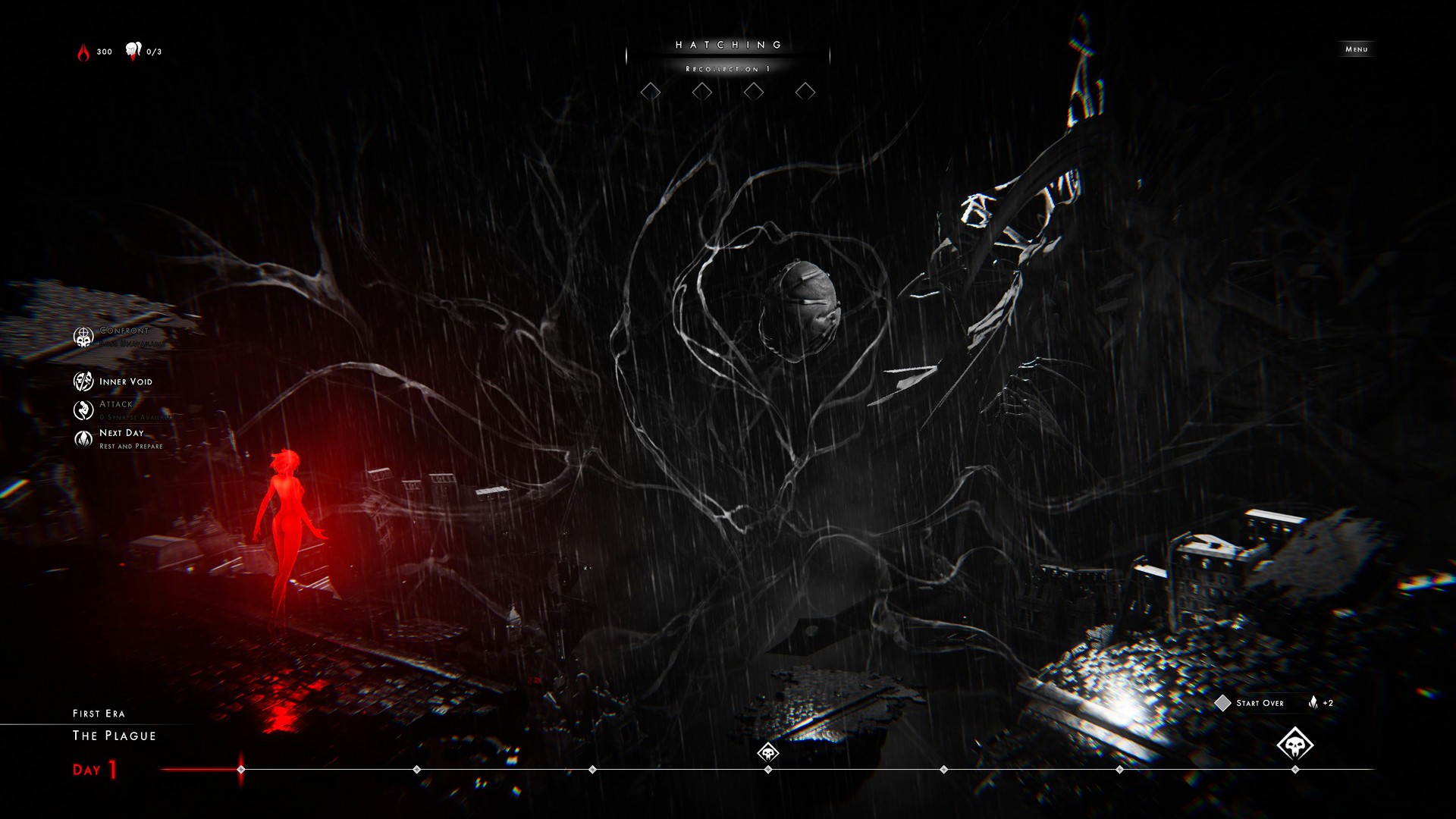 Since the tutorial does such a great job explaining the basics, I really feel like it makes Othercide so much easier to get into! Nothing beats facing off against scary bosses while slowly digging to slow rock. So, now for the less appealing part about Othercide. It pains me to say that Othercide really feels repetitive since Othercide is a game with so much potential! I enjoy playing shorter sessions, but it gets boring quite quickly once you have gotten used to most of the things. It is unfortunately a pretty big turn-off for me when it comes to video games, since a game like Othercide really pumps me up for an exciting story that I can’t wait to sink my teeth into! I don’t know about you, but I think I have gotten a big enough slice of Othercide that will last for a pretty long time!

To wrap things up, Othercide is truly a unique experience, but it unfortunately wasn’t enough to make me sit all the way through. Even though I really enjoyed most of the aspects of Othercide, the boredom still hit me too hard! Whether you’re looking for a turn-based strategy game or a title with a darker story, I would highly suggest looking for something else.

At the end of the day, Othercide was truly a nice experience! It is just sad that it got repetitive and ruined the experience. It could have been so much more!