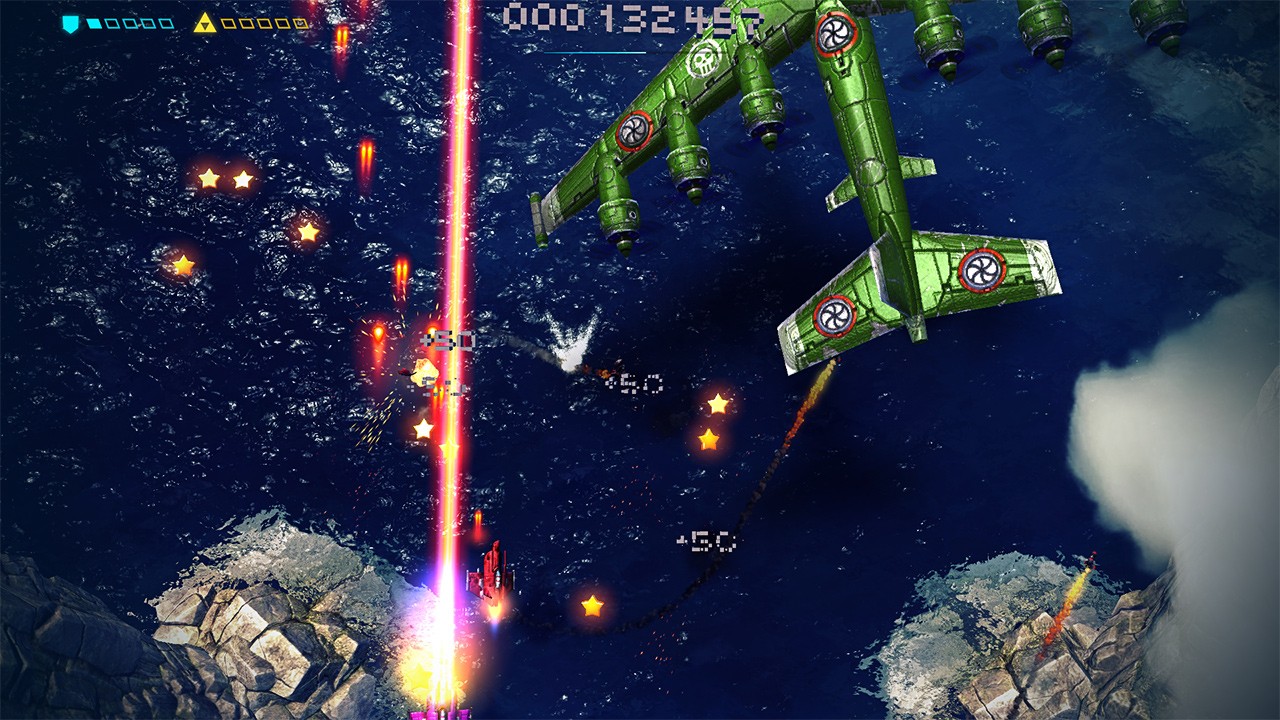 Sky Force Anniversary is the 10 year celebration of the original game, bringing a lot of improvements, social events, stunning 3D graphics and extremely smooth gameplay. Basically, one of the best Shmup games that I’ve ever played, and I’ve been playing this genre for a long time ago on my SNES and Sega Genesis. Its first release was on Xbox One, Wii U and PC in 2014, finally departing on Switch only four years later.

This version comes with an upgrade system that will make you play hours straight, because of its very well made in-stage objectives – specifically four of them – containing very clear tasks that are needed to be accomplished in order to get medals, one per task. These medals are required to unlock further levels on stage select’s timeline, which gives you the feeling of wishing to replay early levels over again and fulfil all those objectives. In general, these objectives are simple, but, normally, you won’t be able to finish this checklist of tasks at once.

And that’s intentional because, as mentioned before, the upgrade system – that happens in Hangar – collaborates to turn you into a dependent on it. You’re really going to need to improve your health, cannons, missiles, lasers and also gather enough stars (also known as money) to make this possible. The player needs to gather these stars during the stages by eliminating enemies, once again encouraging the replay value – liking it or not. Some upgrades are more passively useful than the ones that only increase your attack and secondary weapons, speaking specifically of the magnet add-on, for example, that attracts the stars to the aircraft, avoiding to miss a lot of them and helping the player to get upgrades quicker consequently. If you don’t feel this is enough, there’s limited items like shields, bombs and lasers as well. 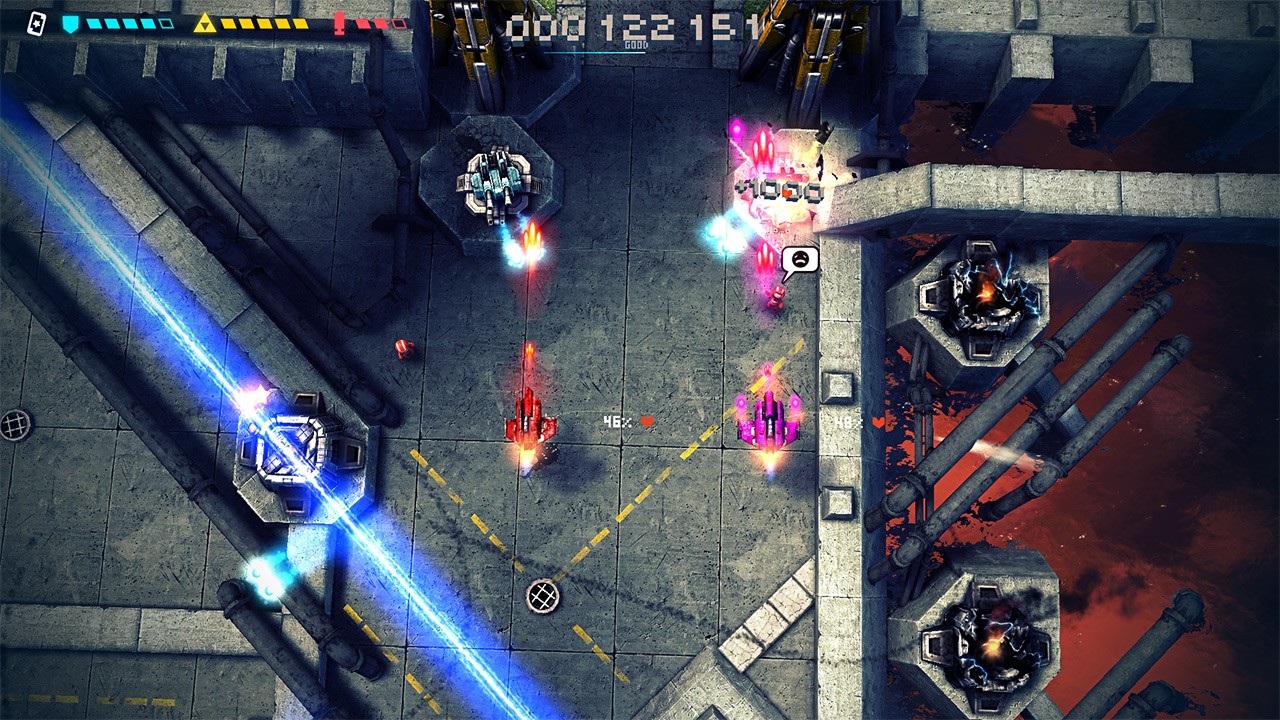 Armed just with the bare equipment, the aircraft probably won’t last so long because the four tasks aren’t easy to accomplish in one shot: destroy 70% of the enemies, destroy 100% of the enemies, save every single survivor and finish the level untouched (without being hit). It’s pretty hard if you want to do all of these with no improvement and trusting only on in-stage fire rate temporary improvement found by destroying enemies, so it’s better to give yourself a slower growth on early game and focus on replay stages to get the upgrades.

That said, you still can make everything much easier playing along with someone using the local Co-op mode with, thankfully, horizontal Joycon mode enabled, such mode that I found relatively hidden because I could only figure this out when I started the game, chose a stage and got the message “2nd player press start”. They should have included a more clear way to do this through an obvious option on the main menu like “two players campaign”.

Anyway, Sky Force Anniversary offers a very fair challenge even playing alone, presenting the same enemies flying pattern (or surfing, considering the ships and boats) that basically follow your shooting, even though not being exactly possible to choose the difficulty level. Let’s say the player can make its own difficult path, since accomplishing the objectives is not mandatory – despite medals being required to open later stages -, however it triggers you to have that sense of completion. At the end of each stage, you should face bosses riding bigger airplanes armed with plenty of cannons and missiles, that are really quite challenging and you will probably ask for help from someone to pass through it – as I needed to. 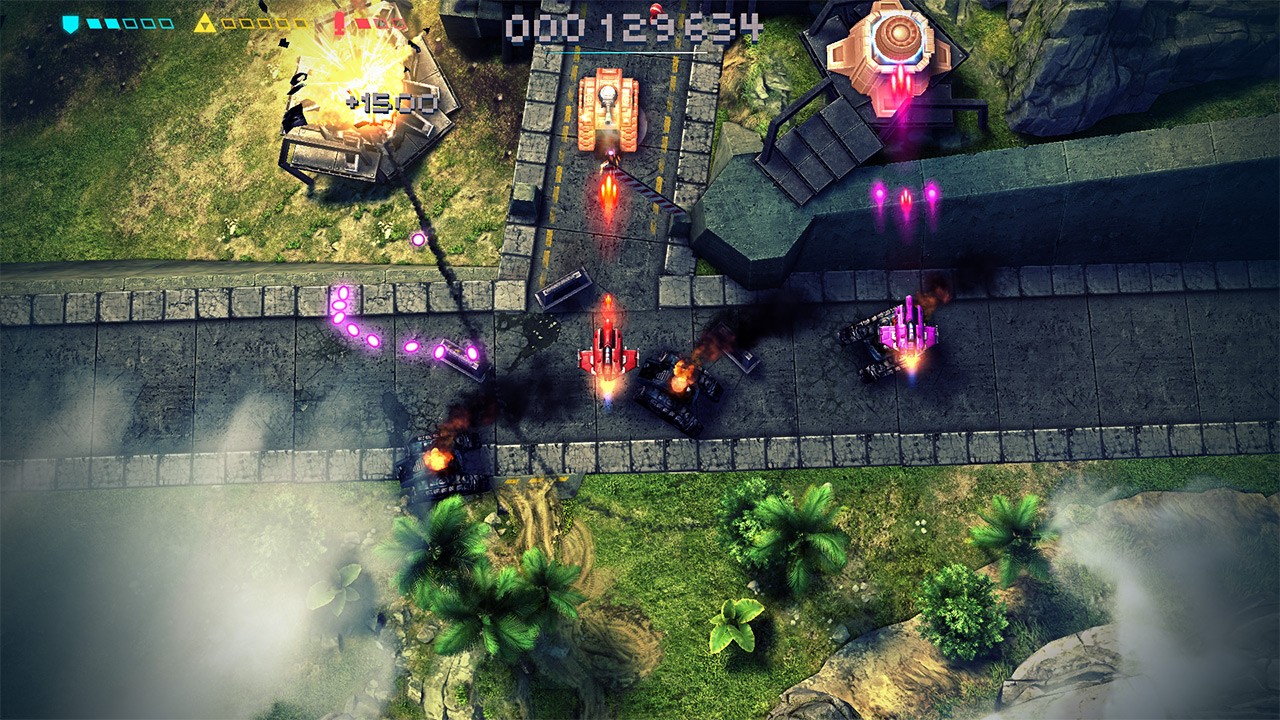 Apart from the standard and the Co-op gameplay, Sky Force Anniversary can be considered an infinite game, since you can unlock tournaments and make extra money/stars playing them. These tournaments are known as weekend contest stages, with its name already speaking for itself, lasting around 1 hour. However, an internet connection is required to make use of this feature, as well, it’s needed to compare your game total score and tournament’s score to your friends, global and regionally through the game’s Leaderboard.

Finally, it’s unfortunate that you’re not able to cosmetically customise the aircraft, choose another model or even simply change your colour. As I said here, the only “customization” is upgrade based. Also, it could have included some cool feature as a level editor or some stuff like that, something rare to see in this genre. By the way, there’s no online multiplayer, a feature already contained in some older shmup games like that awesome free Xbox live arcade game called Aegis Wing, which I had a lot of fun with friends through the internet. In conclusion, Sky Anniversary is totally worthy, gives you enough fun and replay value, but it loses the opportunity of doing something more innovative or remarkable.

Sky Anniversary is totally worthy and does a good job in terms of gameplay, co-op mode and replay value.