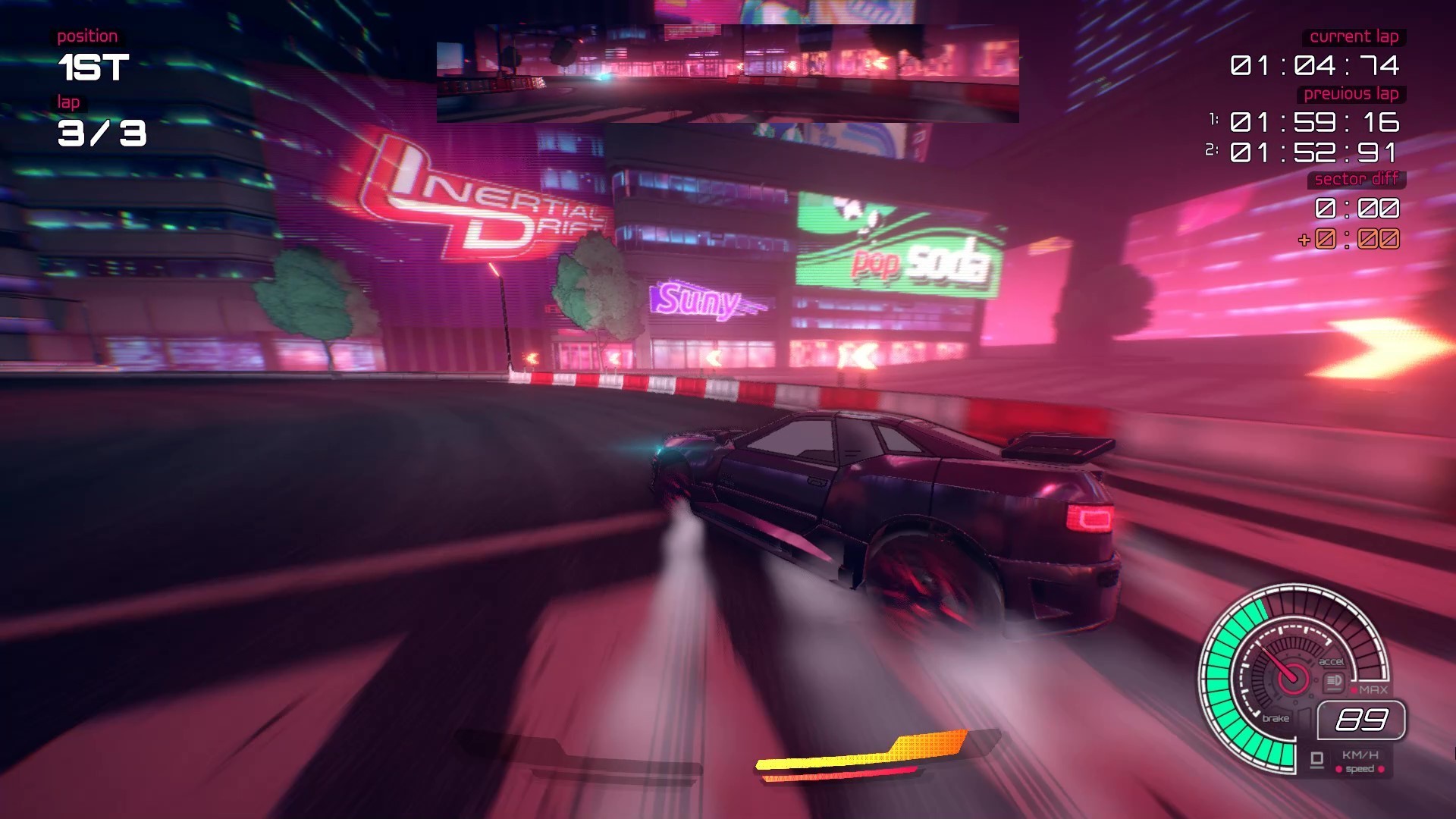 I have always loved SEGA’s arcade racing series, Initial D. Based on the hugely popular manga that ran from 1995 to 2013 in Japan, it is a series that has spawned a whole host of top-tier arcade games that, well, used to come to console. Sure, you had to import them (most of them anyway), but since 2008’s Initial D Extreme Stage on PlayStation 3, even that option has disappeared.

While the wait for a new console port invariably goes on (come on, Sega, pull your finger out), Level 91 Entertainment have delivered the next best thing by developing an arcade racer that follows the same kind of pleasingly cheesy narrative that the Initial D games are famous for while also delivering a new twist on the 1vs1 drift racer template.

At a glance, this 90s retro-future inspired racer looks like Initial D crossed with Ridge Racer after being spun through a neon-infused blender – simply put, it looks absolutely gorgeous. You race against the clock, you race against a ghost, and then you race against a rival. The structure is pleasingly familiar if disappointingly underused in the last few generations, and while that would honestly be enough for me as a huge and brutally underserved fan of the arcade racing genre, it’s the games’ unique twist on drifting mechanics that ensures that, while it works as a nostalgia trip for 90s arcade racing fans, it also stands firmly on its own two feet (or four wheels) as a unique and somewhat innovative racer in its own right. 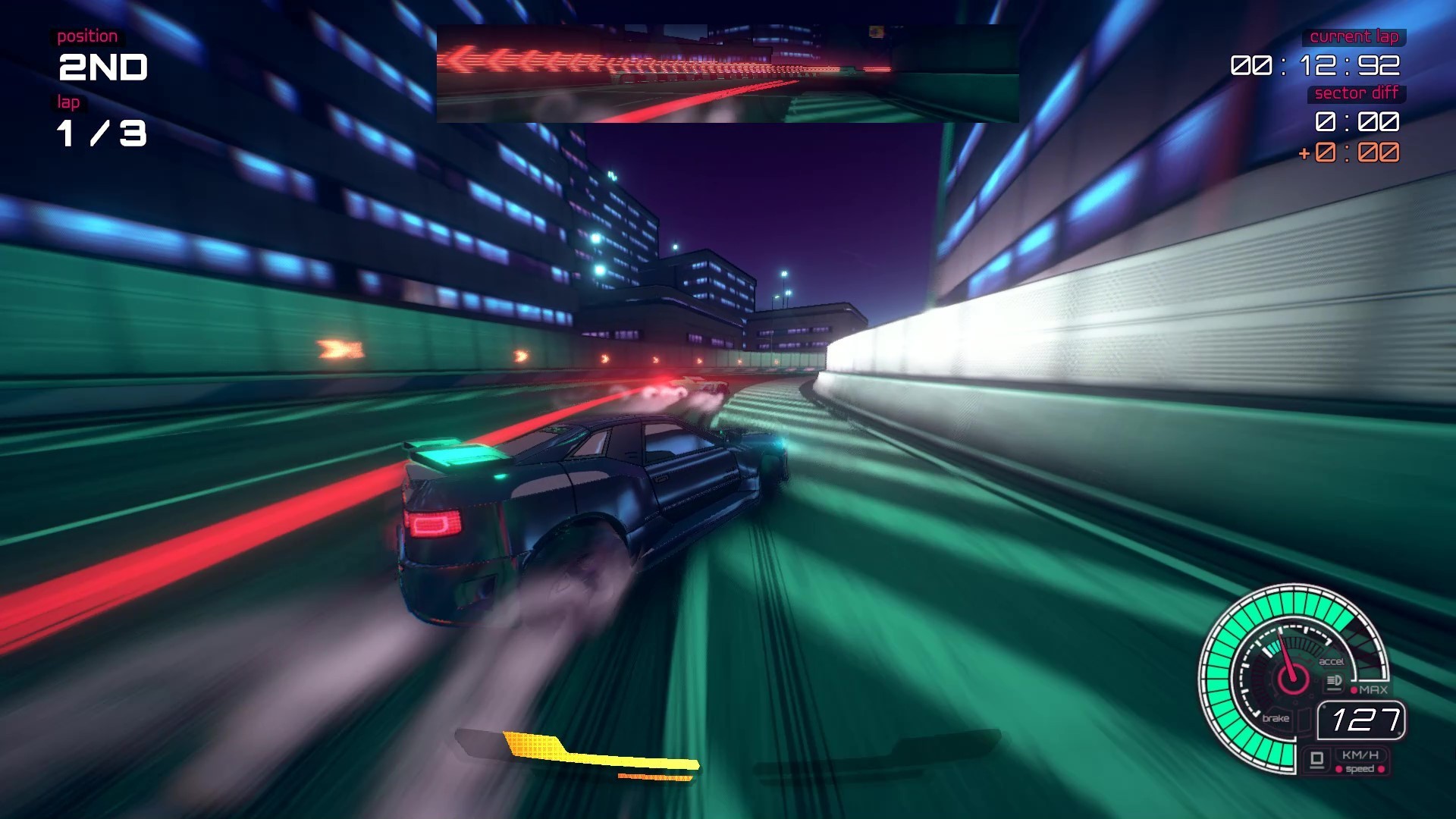 The big change here comes in the form of its twin stick drift control. While initially slightly awkward, it soon clicks and, man, when it does, what a difference it makes. The cars handle as you would expect, but the unique control method makes the whole experience feel quite unlike anything else on the market. Sure, there aren’t tons of courses, cars or characters to unlock, but that fantastic control method combined with the relatively high difficulty of AI racers (at first at least), ensures that this is a game that demands perfection at every turn.

Other racers out there might have much more content, but like SEGA’s finest arcade racers, this is a game that encourages repeated play – every corner feels like a unique challenge – each location its own distinct beast. Whether it be beating the AI competitors, other online racers or your own best times, Inertial Drift is one of those racers that kept me coming back to the same tracks repeatedly. Sure, I wanted to finish the challenges in front of me, but as much as that, I simply wanted to improve my own performance – to nail that racing like or perfect a particularly tricky corner. I honestly can’t remember the last time a racer was so utterly addictive or brilliantly engaging in its moment to moment gameplay.

You will have to be patient though – some will pick it up faster than others of course, but that dual stick racing control really feels somewhat awkward for the first few races. You can use the left stick to turn as normal, but the amount of actual turn you get from that stick alone if minor to say the least. It’s used more for minor corrections (kind of like the yaw controls on a flight simulator), with the real turns and drifts completed via the use of the right stick that automatically throws your back end out and puts you in to a drift. It sounds simple enough on paper, but the control of both aspects of handling simultaneously, combined with the need to break and tactically lift off the accelerator can, and probably will feel initially alien to those used to traditional driving mechanics. Once you get it though, it provides a huge amount of control for your drifts and a surprisingly deep driving model. It’s arcade sensibilities ensure that it’s easy enough to pick up, but if you want to master the games’ perfectly constructed collection of tracks, you must master the games’ utterly unique and quite brilliant handling model.

While it understandably can’t compete on a content level with the likes of Gran Turismo or Forza Horizon, that’s not to say that there isn’t plenty to do here. Yes, the number of cars and tracks is somewhat limited, but beyond each car and track feeling pleasingly unique, the sheer number of game modes available ensures that there is plenty to do for those looking to refine and improve upon their drifting skills. There is an admittedly basic online mode, a Challenge mode, a very solid Arcade mode, additional challenges via Grand Prix mode and offline split screen for those looking to go full 90s. Sure, much of that content is quite similar, but it’s all fun enough, and more importantly, provides plenty of reasons to get back out on the track. 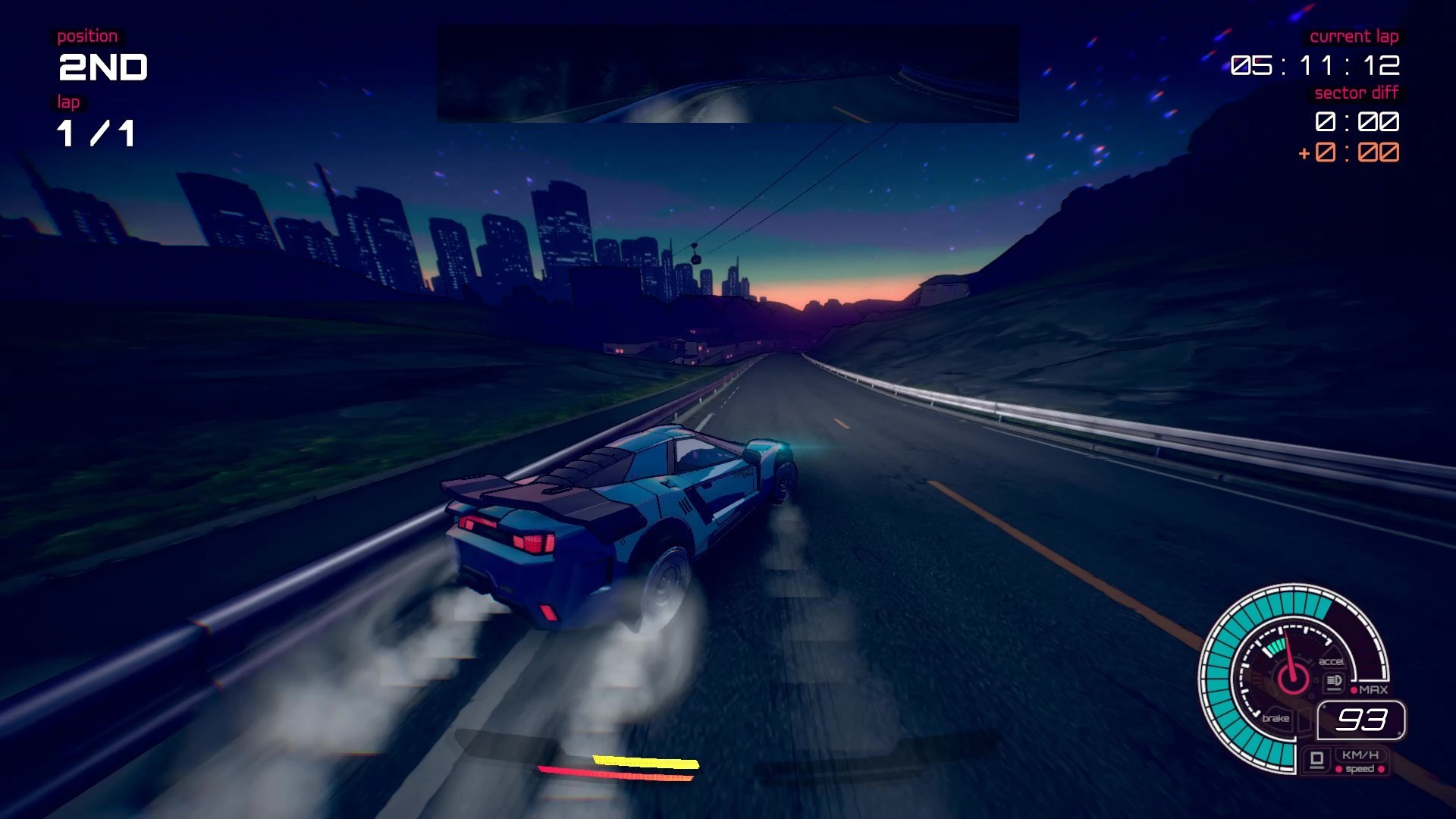 The best of all, though, is that Initial D inspired story mode. Yes, the dialogue is cheesy as hell, but it’s charming stuff and successfully adds plenty of character to a game that already oozes it from every pore. Like Initial D, each character is linked to a car, and after choosing a character and car for yourself, it’s your job to visit the games’ multiple locations to challenge its racers and overcome their distinct racing styles. The narrative probably plays up each characters style a tad too much, and the overtly friendly racers you’ll come across aren’t nearly as interesting as the infinitely more douchey competitors found in Initial D, but mostly, it’s all pleasant stuff, and provides a solid framework for your ongoing drift-based adventures.

The real star of the show though has to be the neon-lit alt-reality 90s setting that appears to combine US-style character art and lighting with Japanese inspired locations – there are far too many random vending machines for it not to feel at least a little Japanese. It’s an odd mix, but one that totally works to deliver a visual style that is at once both familiar and unique. The persistent neon-style lighting ensures that it eventually all looks a tad samey, but when it looks as downright cool as Inertial D, a general lack of visual variety is much easier to forgive.

The racing mechanics might take a little while to get used to, but once Level 91 Entertainment’s fantastic twin stick drift control finally click, they deliver an arcade racer that feels as wonderfully familiar as it does utterly distinct. It might not have a ton of tracks or vehicles, but everything here feels brilliantly memorable and pleasingly unique, and thanks in part to its charming story mode and gorgeously vibrant visuals, stands out proudly as one of this generation’s very finest racers.

Everything here feels brilliantly memorable and pleasingly unique, and thanks in part to its charming story mode and gorgeously vibrant visuals, stands out proudly as one of this generation’s very finest racers.