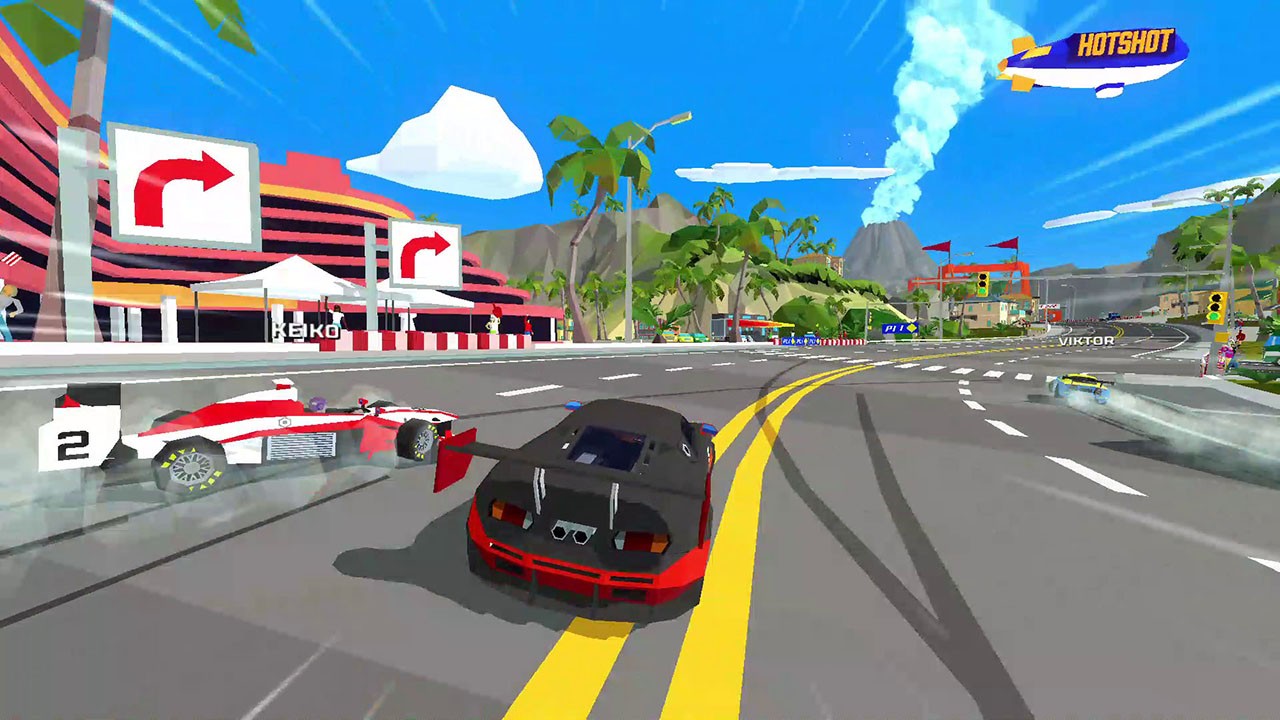 When I think of arcade racing games, there are a few titles that spring to mind instantly for me, Ridge Racer and Outrun to name a few. It is really difficult these days to grasp an arcade style racer as triple A studios tend to opt for realism over something casual and rightly so. Now I’ll be completely honest and state that the first I’d heard of Hotshot Racing was the day it came to Xbox Game Pass. That’s right, you read correctly, if you’re a subscriber of the Xbox Game Pass, then you’ll be delighted to know that you can download and play this for no extra cost.

Hotshot Racing is developed by Lucky Mountain games and SUMO Digital. I don’t know a great deal about Lucky Mountain Games however SUMO Digital are responsible for some excellent additions to the gaming world with games such as Team Sonic Racing most recently and have had their hands on titles such as Little Big Planet and Crackdown 3. Published by Curve Digital, Hotshot Racing is a blisteringly fast arcade-style racing game, fusing drift handling, razor-sharp retro visuals and an incredible sense of speed to create an exhilarating driving experience.

There is still a huge market for retro type games and still plenty of opportunity for scope. I often see friends and new faces instantly dismiss retro style games because they aren’t all the bells and whistles of today. There is truth in the saying “Graphics don’t make a game”. I have had plenty of surprise indie titles that have engaged me more than triple A titles. Now obviously it is down to personal taste and choice, but the beauty of the Xbox Game Pass is that you can download these titles with no risk and extra financial outlay. You’ll also be pleased to know that Hotshot Racing pushes out a solid sixty frames per second for nice crisp responsiveness. 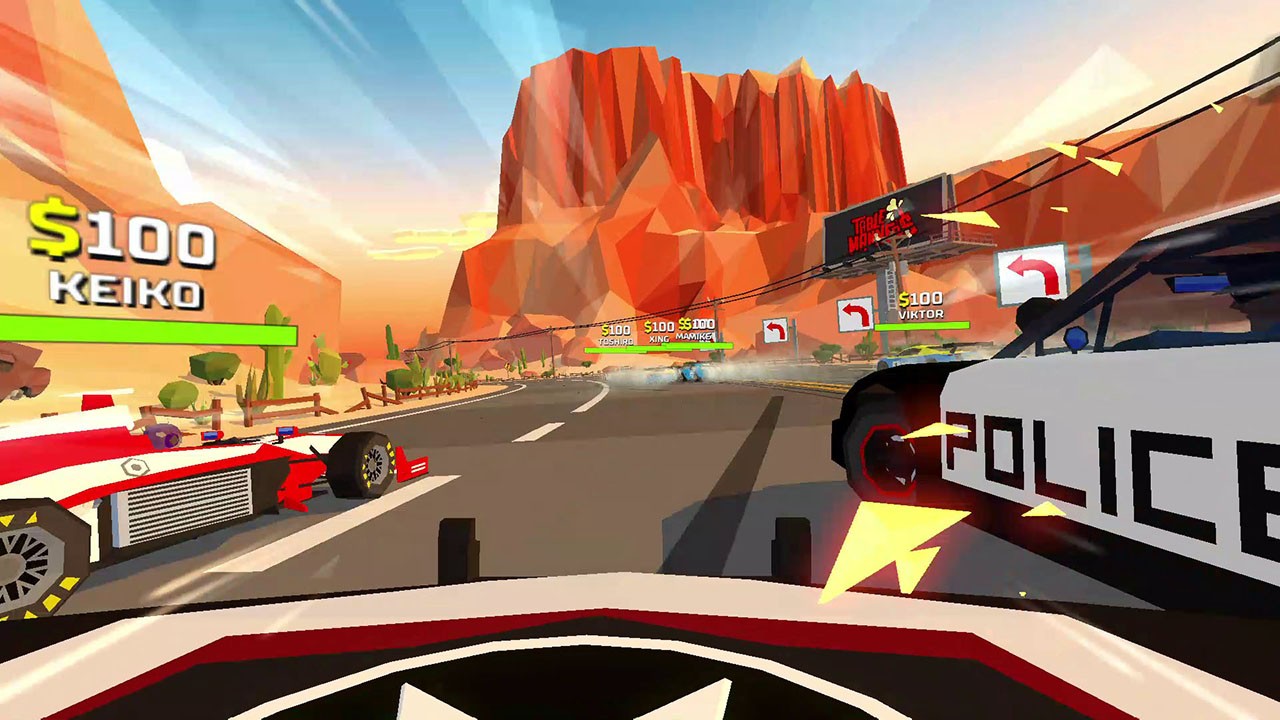 If you’ve ever played the Outrun or Virtua Racer titles in the past, then you’ll be right at home with the visuals here. Though it is not as rough around the edges as 90s graphics, the same premise and feel of the game is here. My initial thoughts were how this game would perform and would it appeal. I have played many retro style roguelike RPG’s and titles such as Stardew Valley, which is exceptional, but how would a retro racer go about this and would there be enough gameplay to keep players interested.

You might want to start with the single player Grand Prix modes first of all to learn the controls and get to grips with the gameplay. You will quickly learn that this is a lot more challenging than just racing. You will have to learn to adapt from being shunted by other vehicles in all directions, adjust your drifts to manoeuvre around bends and utilise your nitro to boost forwards. Hotshot Racing brings a fantastic aura and salute to the past with its beautiful backdrops surrounding its sixteen tracks across the globe, which also includes mirrored options. Locations are diverse with coastal, jungle, alpine and Las Vegas desert environments to keep the game fresh and interesting. The colours are extremely vivid in an attractive way and the bonus of sixty frames per second makes it a joy visually.

You’ll be able to choose from a catalogue of racers including Keiko, Xing, Mike, Alexa, Aston, Toshiro, Marcus and Viktor. Each racer appears to have a different nationality and also the choice of four different vehicles. Along the way you gain currency from racing, which enables you to purchase cosmetic items for your characters along with the vehicles as well. You’ll be able to unlock different paint jobs to kit out your car exactly how you want it to be. 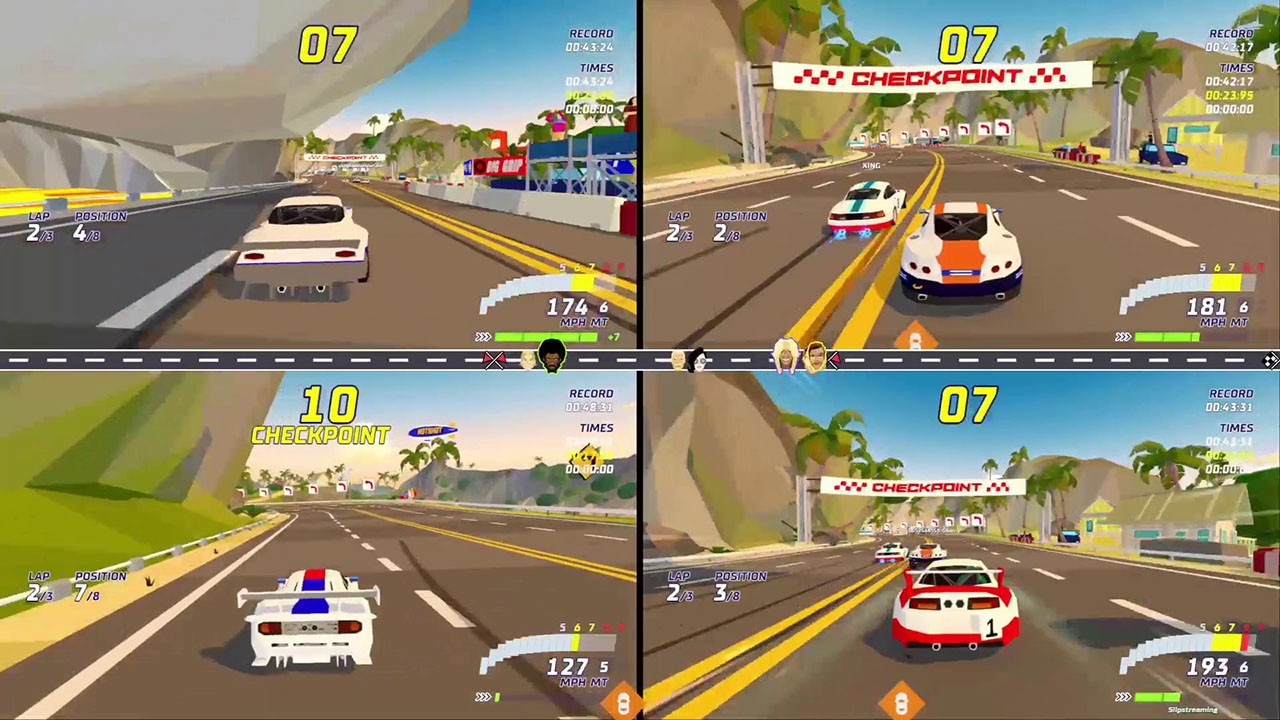 Grand prix mode is where I started the game and the designated option for the career mode essentially. There are several events with three difficulty levels with a trophy for each difficulty. These races obviously differ in difficulty depending on which option you choose, however if you want to unlock all the trophies you must experiment with harder settings. What I enjoyed about the Grand prix is how challenging it was even on the lower difficulty levels. The AI is super responsive and likes to trade paint. Time after time I have played racing games where it is so easy to beat the other cars to take the podium. Grand Prix was seriously competitive against the AI and it genuinely fills you with happiness when you win a race as you will more than likely have worked extra hard for the win. There is also an option to do time trials on each of the levels to try to get your scoreboard on the Leaderboards and create some bragging rights.

Now you’re probably thinking, is that all Jordan? Hotshot racing also has an online multiplayer department where you’ll want to head if you really want to get competitive. Here you’ll be able to partake in normal straightforward races, a game of cops and robbers or drive and explode. Online racing also caters for up to eight players on the track at any one time. Cops and robbers is a mode where four players are cops attempting to catch the robbers on the track. Drive and explode will have you under pressure as you attempt to maintain a set speed to survive or explode. The online ranking system could have done with more clarity as you are automatically given a number 1500 and depending on how well you’re playing you go up or down with this number. It reminds me of the same system Mario Kart Online uses to determine results with wins, losses and suchlike.

Hotshot Racing was an absolute blast to play, whether it was trying to win all the trophies in Grand Prix, beat someone’s time on the time trial Leaderboards or head online for some racing action. There is something for everyone here and another indie hidden gem. The gorgeous colour palette blending in with the course design is incredible for a retro game of this size. The in game currency system will have you playing for hours on end in the attempt to unlock everything. I was surprised at how rich in content this game was, I definitely wasn’t expecting to be able to change my characters outfits and suchlike. I had that much enjoyment from Hotshot Racing that I have returned to the game every day since launch, and I am contemplating purchasing it for the Nintendo Switch for the portability option. The real stand out factor for me was how they have designed such an old school concept, yet have modernised the visuals, mechanics and feeling of the game and ensured longevity for those in it for the long haul. If you have Xbox Game Pass, it is more than worthy of a download and for players of other platforms, it is worth consideration as a purchase if you want a competitive indie.

Rich in content and excitement, Hotshot Racing is an arcade retro racer which performs well at 60FPS and adds online competitive racing to the mix.