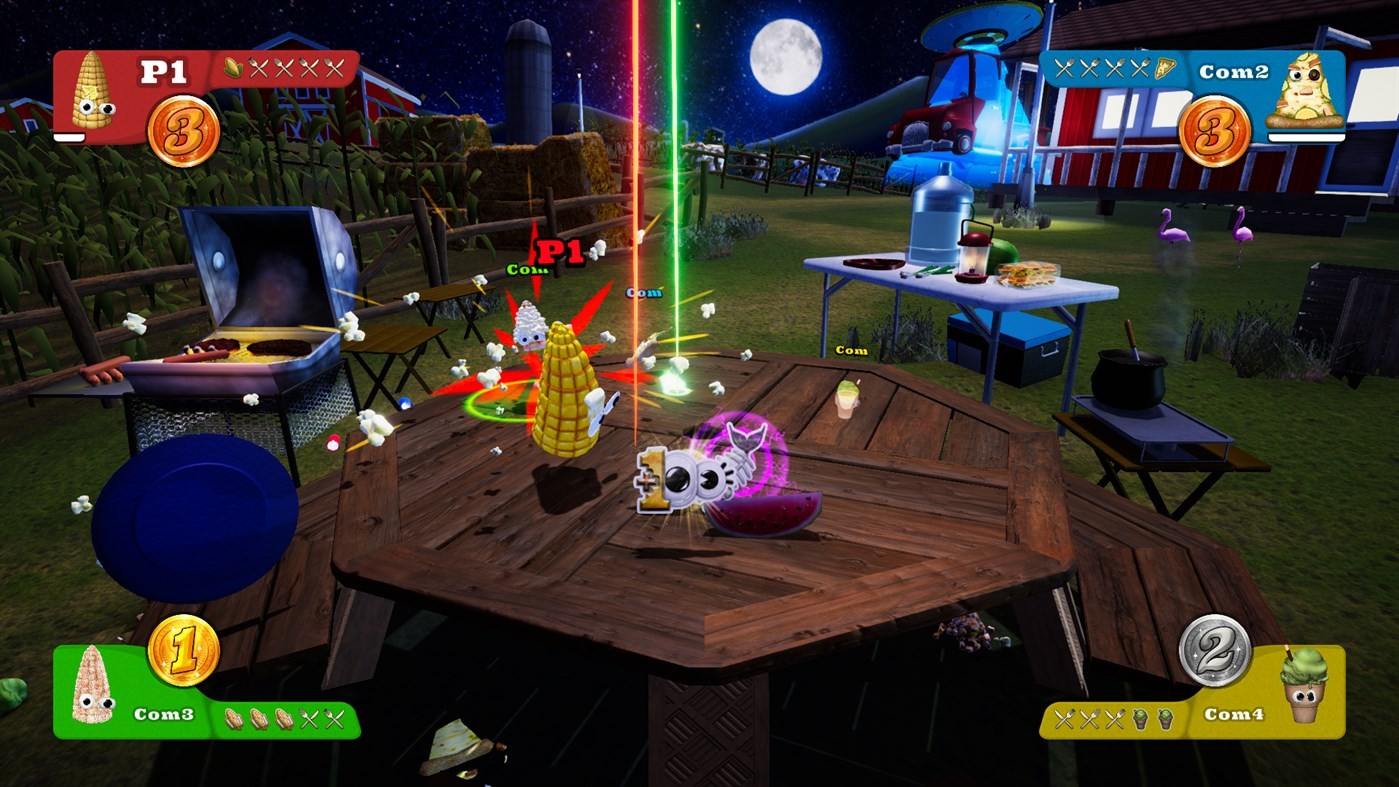 Everyone knows that party games and Battle Royale titles are hot business at the moment. Esports have even taken up the mantle and added several titles to its competitions. What I can safely say is my latest review title won’t be making the leap from casual experience to competitive play anytime soon. Lunch a Palooza is a fast-paced battle game where you control an item of food. Your only goal is to attack your enemies and win each round. Will you hang around for the full 3 courses, or will you ask for the bill after one course? Let’s pick up our knife and fork, and dissect this game one section at a time.

Developed by Seashell Studio and published by Alternative Software Ltd this casual gaming experience can be played solo against up to 3 computer players, or with 3 other humans. You are treated to 4 different game modes, each have their own objectives and ways to win. Main Course is a free for all, you have a set number of lives, and the winner is the last piece of food standing. Side Dish, has teams of 2 or 3 where a victory rests on the ability to work together to overcome your opponents. King of the Cloche, you must be the piece of food that sits atop of the hill for the longest, first to 100% wins. And finally Royal buffet, you spawn in as a different food types, each time you die.

As I’m sure you can see, the developers love the food-based theme. Every level revolves around different eateries and catering venues, so by the end of this game, you’ll either be a foodie, or be triggered when you hear The Great British Bake Off being advertised. The theory that each battle takes only a few minutes should be right up my street. Short, sharp rounds that allow me to jump in and out as I please, is something that appeals to me. In reality, it left me feeling empty, and I constantly got pummelled by an angry corn on the cob, or an overpowered quarter pounder. You are not afforded the pleasure of a tutorial, the best you get is a simple explanation of what the buttons do. I spent the first 5 rounds hammering buttons and hoping that I could work out what I was doing. There was a consistent outcome, and that was me achieving 4th place. It was frustrating, and what should have been fun and amusing quickly turned into me screaming at a piece of cheese as it somehow flicked me off the table for the nth time. 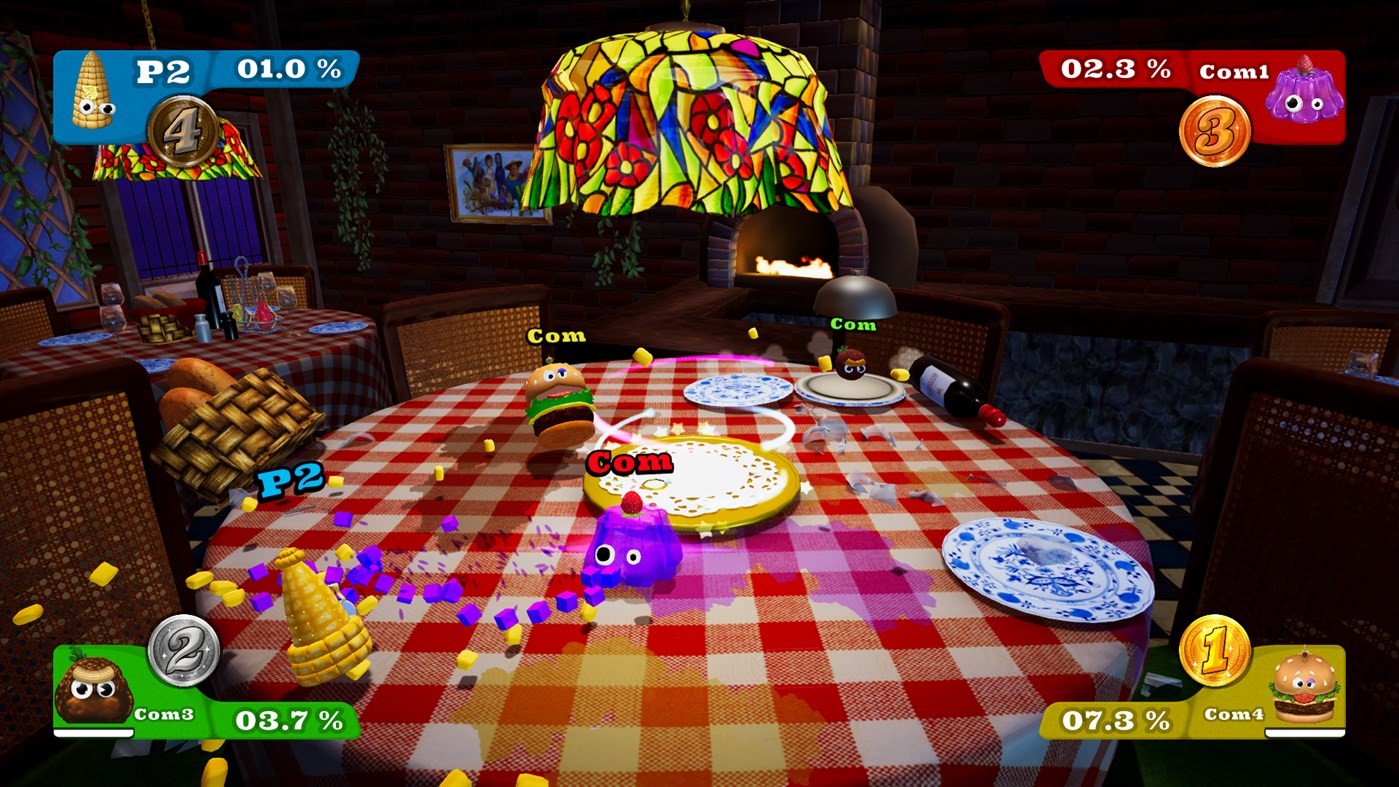 I’m pretty stubborn, so I would not let some cocky takeaway foods get the better of me. Needless to say, things didn’t get much better, I attempted to change game modes, and even this didn’t alleviate the horrendous food whooping that I received. I concluded quite quickly, this was a game that attempted to be quirky, and fast-paced, but by doing so it produced a messy and confusing game that was more luck than skill or judgement. Each of the different modes simply relied on the same game mechanic. Mash the buttons as quickly as possible and hope that you are victorious.

I admit that I didn’t know what to expect when I loaded this in, I was instantly attracted to the colourful imagery, and the unusual theme. The fun play on the food idea caught my attention, and I thought there would be a lot more to it than what was served up. Maybe I don’t have the skill to be successful at this style of game, or maybe I missed the point completely, but to come rock bottom in every game was unusual, even by my standards. I know you’ll be shouting “Get Good!” And maybe I should, but I’m not sure how to do so when a title merely presents its main game mechanic as the person who can mash the buttons the hardest and quickest. The fun factor was sucked out of this from the beginning, and it failed to install it back in at any point.

Its visual presentation was pleasant, the vibrant colours, unusual food design, and different venues kept everything lighthearted and fresh. The variety in landscapes didn’t appear to add anything to the gameplay, though I could well have missed this because of the hectic nature of how each round unravelled. The view in which each battle takes place means you can see everything that goes on, even if it is all a bit of a blur. There are a good variety of characters to choose from, and each has a unique attack and defence.

The audio does its best to add to the madness. High tempo, and almost obnoxious tunes play out as you fight. The basic sound effects of hitting and slapping one another breakthrough this constant noise, and help to increase the confusion and insanity levels. The music wasn’t my cup of tea, but it need not be,. All I can say is it worked well with the style of the game, and the overall theme. 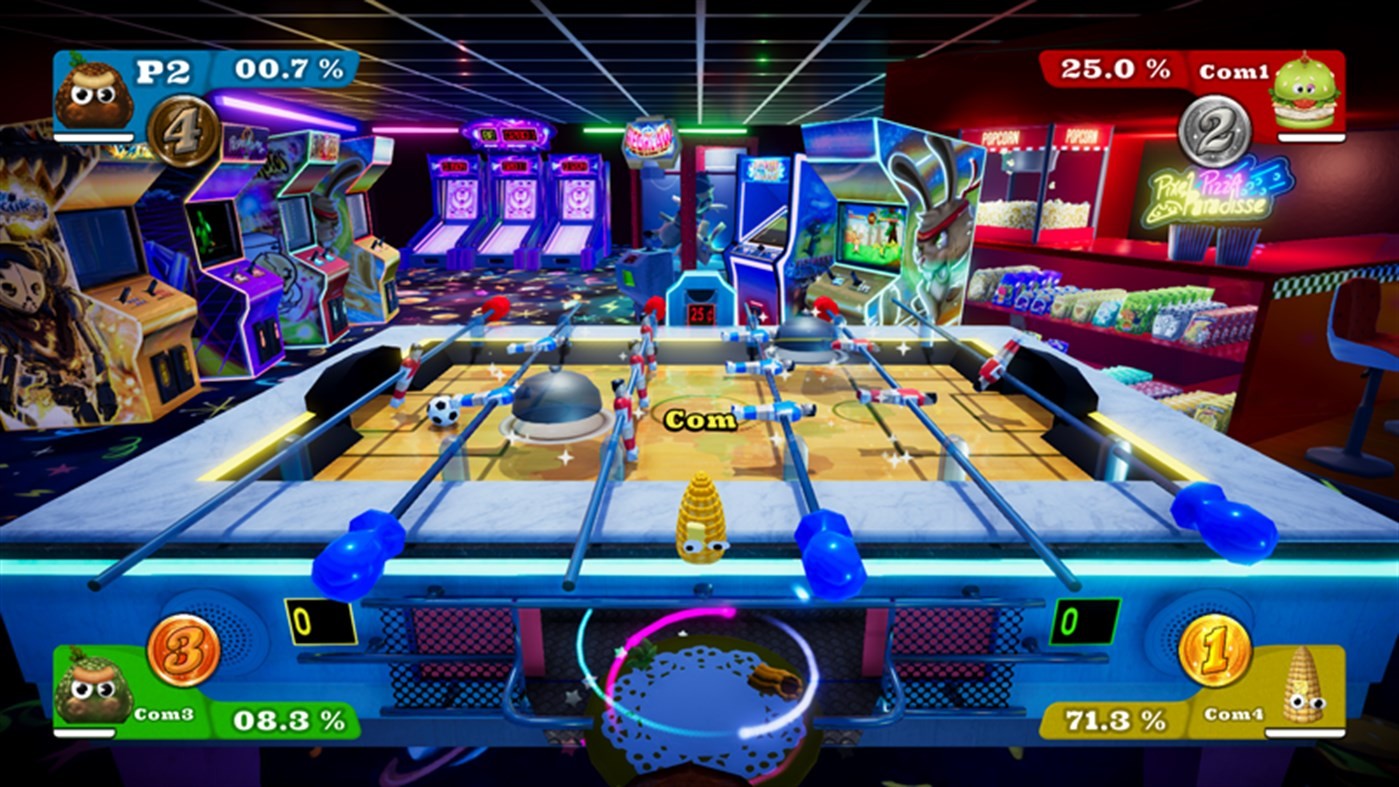 This title does well to inform you about how the control system works, you are given a clear image of what each button does. What it fails to do is to explain how it works during the gameplay. Everything is happening so quickly that you don’t get time to think. The developers missed the chance to allow its player base to bed themselves in. Had they done this, it would have removed most of the issues. As it is, the experience was tainted, and I wasn’t able to get into this one as much as I wanted.

Visually there is a reasonable level of variety to be had, but from a gameplay perspective, this was lacking. The 4 different modes relied heavily on the same mechanisms with a few minor tweaks. This ruined the replay value, and left me wanting so much more. Other than taking on my friends for a chance to say who’s the best food item, I can’t see myself returning to this one any time soon.

Lunch a Palooza had the opportunity to produce a fun, quirky, and an exciting battle party game. What I ended up playing was far from that, unfortunately. There are a few redeeming features, such as; the graphics, audio, and the button explanation. But, with a lack of tutorial, and any real focus, or variety, it gets frustrating and boring very quickly. Do I recommend you buy this? No! There are much better party games available, all of which are more in-depth, and less frustrating. It’s time to control your piece of food in this fast-paced party game. Unfortunately, it’s as fun and fulfilling as going to a restaurant when you are on a diet.

A confusing and fast-paced battle party game. It will leave you frustrated and wanting more.