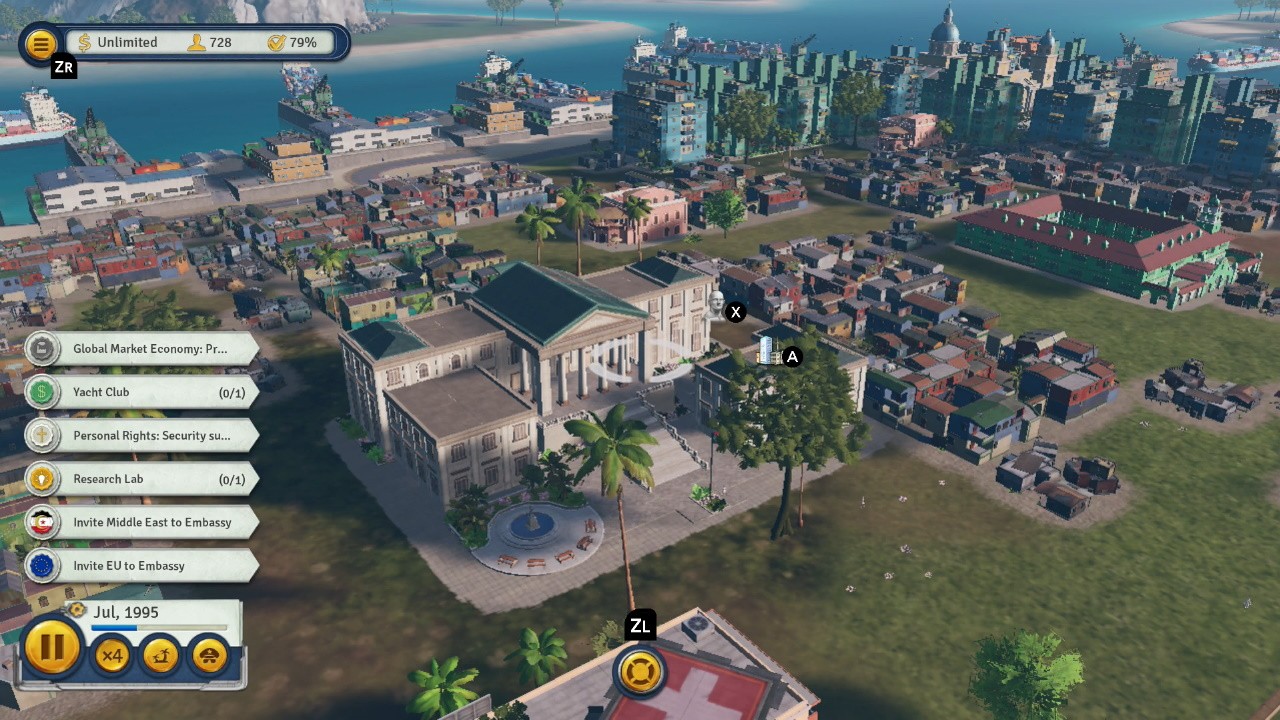 Having an in-depth strategy title from the Tropico series is welcome to the Switch with open arms as a console not just for the casual player or family, but for those intent on dictatorship. Not something often associated with the Nintendo, but taking the role of El Presidente and ruling the land how you see fit is viable now, and you can do so without any of that archaic voting malarkey.

The last Tropico game I played was on the PS4, so jumping to the handheld was an interesting one as that was the method I mostly played the game in, rather than the docked mode. Surprisingly, it isn’t as difficult to decipher anything in the game, and the UI isn’t as cluttered as some of its counterparts, so there are no concerns for playing this in portable mode. Not that you would play something such as this or Civilisation on the bus to school or train to work, but most of us aren’t allowed to do so. Governing your people on your sofa is much better.

If you’re familiar with the Tropico series, you’ll be at an advantage as it’s a little overwhelming. The tutorial does cover the basics, but as with most games within the genre, you’ll get a better understanding through playing. There are two modes to choose from: mission-based or a sandbox. 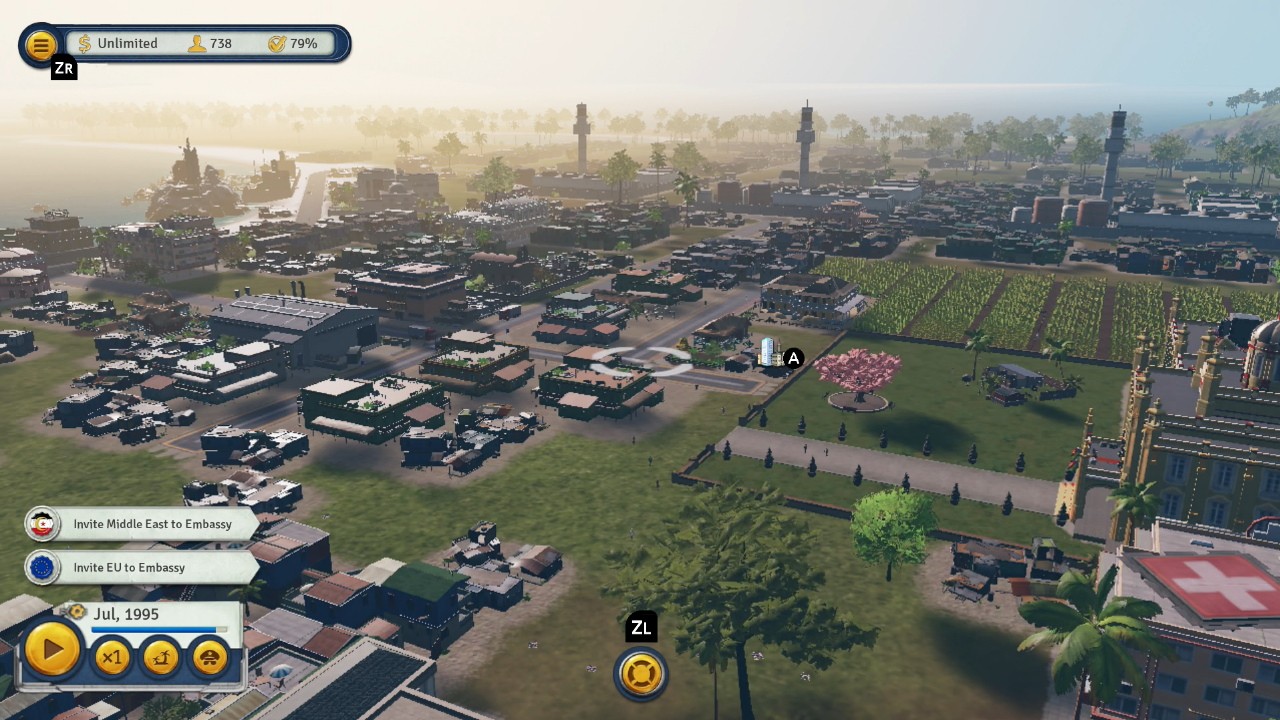 With the latter, I highly recommend you set yourself a timer as it’s so easy to get lost in this game as it takes an age to make progress (in a good way as progress is the point of the game). Though it’s easy to lose yourself, bear in mind that it isn’t all peachy as civil unrest is strife, depending on your management style, and managing budgets is a feat in itself. For a very brief time, you can sympathise with politicians. Emphasis on brief.

In some respects, the missions are tutorials (with consequences) as they will be tailored to a particular playstyle. In theory, these are the proving grounds that will help you last longer in power in the sandbox mode, and also teach you methods to thrive which you may have previously overlooked. As a bit of a veteran with real-time strategies, I’m honest enough to admit that if a tactic works, I’ll milk it. But in Tropico 6, variety is the spice of dictatorship, and it’s encouraged that you learn the benefits of each service you have to offer, listening to the people (overrated) and placing overlays on your territory to measure happiness, productivity and efficiency among others.

One of the best parts of the Tropico series is the deviancy on offer. From assassinations to vanilla bribes, Tropico 6 encourages it, if you can get away with it. You’ll also have encounters with modern-day pirates. They aren’t as loveable as perhaps Disney want you to think they are, as they’ll raid your city of resources, but you can also work with them, stealing from other nations. It’s fun to play the baddies. That said, you can be a little more conventional and care for your people, but where’s the fun in that. Equally, that’s how most world leaders run their nations, and most of them are still in power, for now. 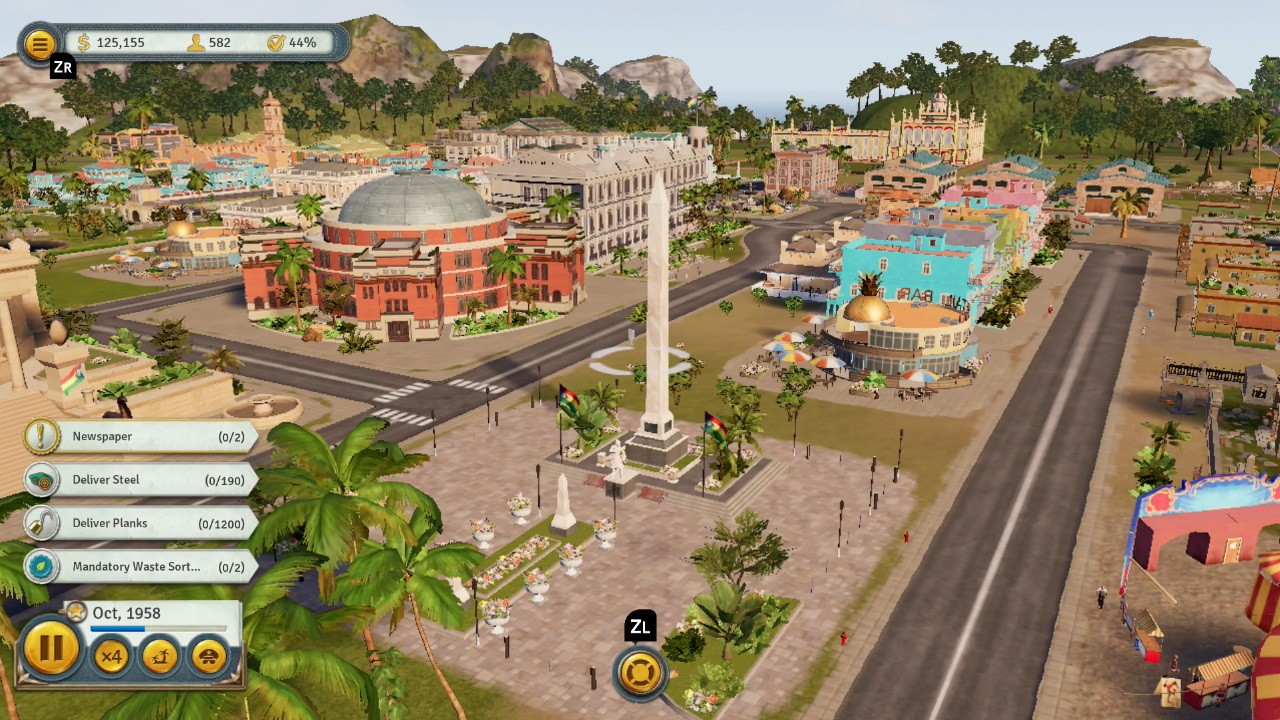 The options available for running your so-called paradise can seem overwhelming as there’s plenty of detail in your actions. This isn’t a light version like an EA game, it’s as feature-rich as the other versions and quite frankly, refreshing to play on the sofa than hunched over a desk with a mouse. Despite the screen real estate, using a mouse is much more preferable, but navigating the menus and maps are fine.

The presentation, as mentioned, is pretty good for the Switch and perfectly playable in either handheld or docked. Of course, it will be sharper on the PC, but if you haven’t got access to this on that or other consoles, it’s fine on the Switch. Another highlight is the sound production as the soundtrack instils a new life in this genre of music for those not familiar with it, other than the odd radio station in a GTA series. Equally, the voice talent on offer here is brilliant, often very funny too. While the tone is on the funny side, Tropico 6 is hardly a light-hearted simulation and players can expect both the challenge and a lot of time allotted to gameplay, but it’s time well spent if you’re a fan of the genre and series.

Tropico 6 doesn’t disappoint on the Switch. It features the same base elements from its PC counterpart and handles well on the handheld, though a bit of slowdown and clutter as can be expected, albeit relatively rare. A fun approach to the genre that’s demanding, yet enjoyable.