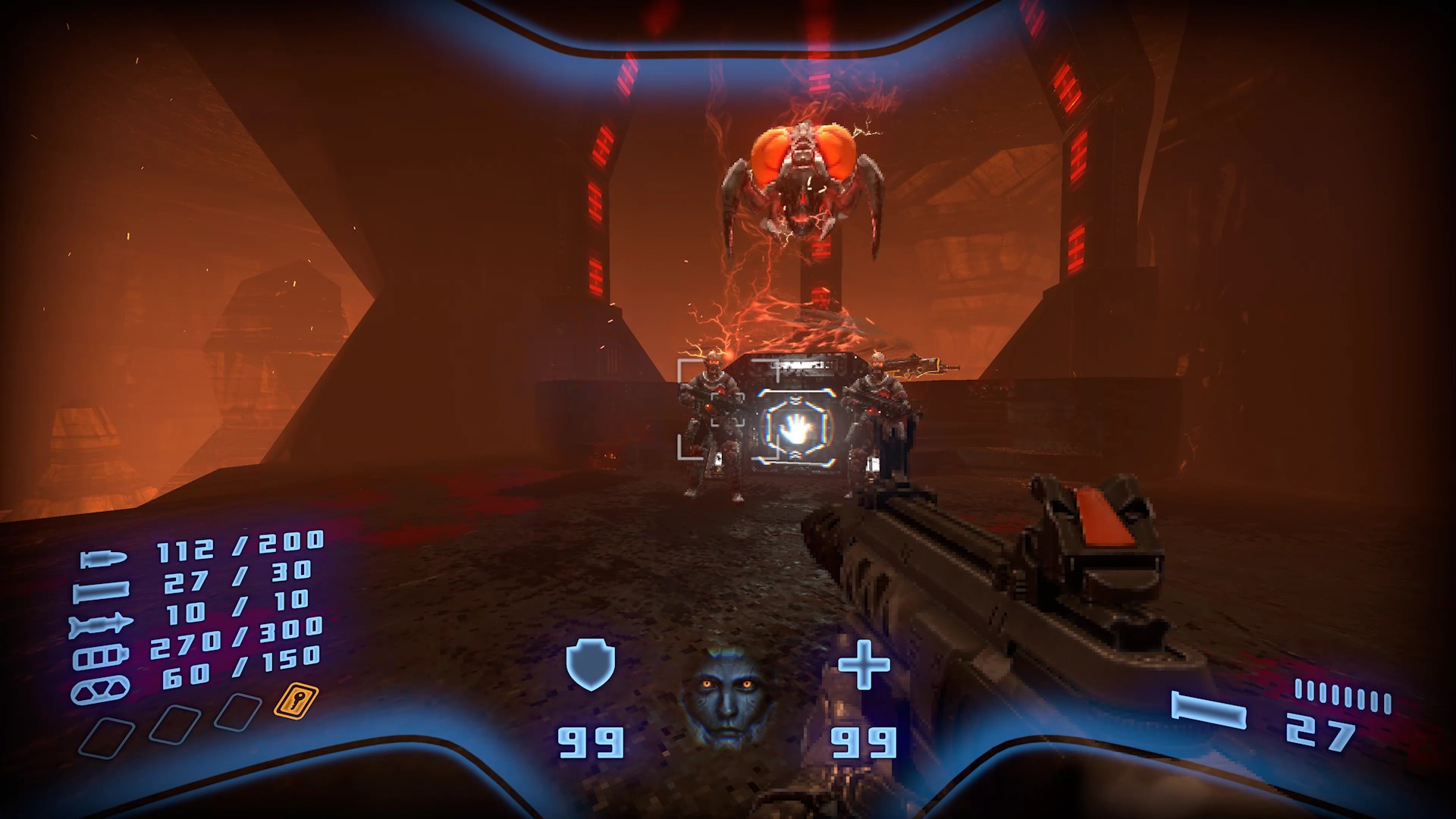 It was merely a week ago that I got the chance to check out the amazing Nightmare Reaper, and now, I’m once again playing another FPS that is quite possibly one of the best that I’ve ever had the chance to play. Prodeus was successfully Kickstarted back in April of 2019, and now, roughly a year and a half later, it has finally reached the hands of players through Steam Early Access. Despite the fact that it only has been publicly available for a few weeks and that it’s somewhat limited in content, it’s pretty clear that this is already one of the finest FPS out there, as the overwhelmingly positive Steam reviews indicate.

There are those games where I play through them once and although I enjoy them, I can’t see myself replaying them. Then there are games like Prodeus, where right after I finished all the content that’s currently available, I immediately went back and played more of it. This is one of those unique cases where you realize just how awesome the game is going to be in the first minute. It was right at that moment, in the first level, when I got my hands on my first weapon and fired it, just a basic pistol, that I knew that I was in for quite the ride.

Every single weapon in Prodeus feels extremely impactful in their own way. When you first fire your pistol or the shotgun and hear the sound it makes, you clearly get to see that Prodeus has spared no expense in regards to its weapon sound design. It’s absolutely stellar and music to my ears. The whole thing is even further exacerbated thanks to the amount of gore that the game has. I honestly don’t think that I’ve ever seen a game with so much blood pouring out of enemies as you utterly disintegrate them. Even though you can play the game with the original sprites or with 3D models, it doesn’t matter, as the game looks great either way. Ultimately, the conjunction of visuals, sound and the overall shooting make Prodeus feel like an out of this world experience.

It doesn’t really matter what your skill level is as far as FPS games go, as Prodeus offers 7 different difficulty modes that you can choose from. Whether you’re a hardcore FPS player or someone who just wants to casually blow up some enemies, Prodeus has got you covered. With that said, at the moment, the campaign is incomplete, but Prodeus already has a fully functional level editor with plenty of community-made maps that you can try out. There are already a few levels from the original Doom, and even some other crazy stuff, like a truck a surfing map, so I honestly can’t wait to see what people will come up with as time goes on. 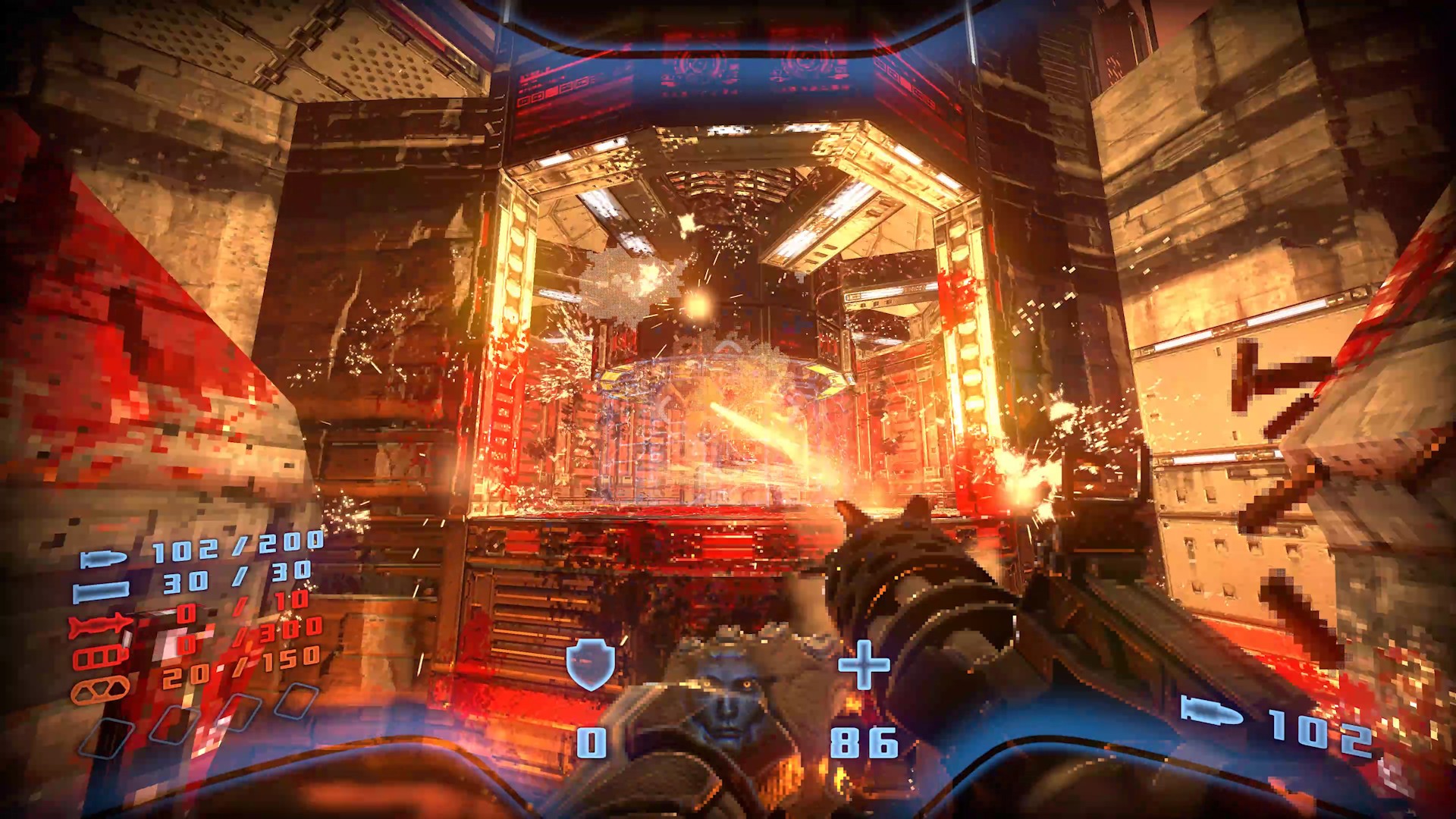 Now, Prodeus campaign might be short, but what’s currently on offer is quite compelling. The level design is obviously highly reminiscent of old-school shooters. There is quite a bit of verticality and there are just as many tight spaces as there are semi-open areas where you face a series of enemies. Still, although you’ll find yourself searching for colour-coded keys to unlock access to specific areas of the maps, there isn’t actually that much of backtracking. The map design allows the player to seamlessly progress through the levels while slaying its many foes. Obviously, there are also secrets to be found which actually fit into the Prodeus scoring system. Based on the time that you take to complete each level, the difficulty that you played it at, kills and secrets found, you’re assigned a specific score which is then uploaded to the leaderboards.

After completing a map, you’re not only presented with your score and time, but you also get to compare your performance with others in the game’s leaderboards. Furthermore, the game also asks you to rate each level, no matter if it’s from the game’s official campaign or from the level editor, which I’m sure is done to help balance out the game. Now, in regards to community-made maps, I guess it’s fairly obvious as to why this happens, as it allows players to affect the global rating of each map that is presented to everyone on the map workshop. One of the great things about the level editor is the fact that you can access it and download maps directly from the game, you don’t need to close the game and access some website or even Steam’s Workshop. Everything is done in-game and it barely takes any time between selecting whatever custom map you want to play and loading in.

Besides your normal campaign missions, there are also Trials, which you can access via the campaign map. Trials are essentially these really short challenges, where you have to use a single weapon to run through the entire level as fast as you can while killing enemies and hitting targets that open up the way to move forward. These are essentially cool ways of honing your skills and test your speedrunning prowess. I’m not usually the type of person who’s into speedrunning, but I must admit that I’ve enjoyed playing through these levels over and over to see if I could do better than on my last attempt.

An FPS can only be as good as its shooting, and we’ve already established that it’s quite spectacular. With that said, Prodeus currently features 9 weapons, but it will receive more in the future. There’s your basic pistol and shotgun, but then you have the Shreddors, which are dual SMGs that, as their name might indicate, completely shred through most enemies. Then there’s also a minigun, a rocket and a grenade launcher, a four-barreled shotgun, a plasma rifle, and this brilliant mixture of an arc gun with a secondary fire mode that turns it into a railgun. Pretty much every weapon features an alternate mode and they come quite in handy. For instance, the shotgun allows you to charge your shots to deal extra damage, while the plasma rifle sends a beacon to an enemy that makes it so that all of its shots will automatically target that enemy regardless of where you’re aiming. It’s pretty bonkers. 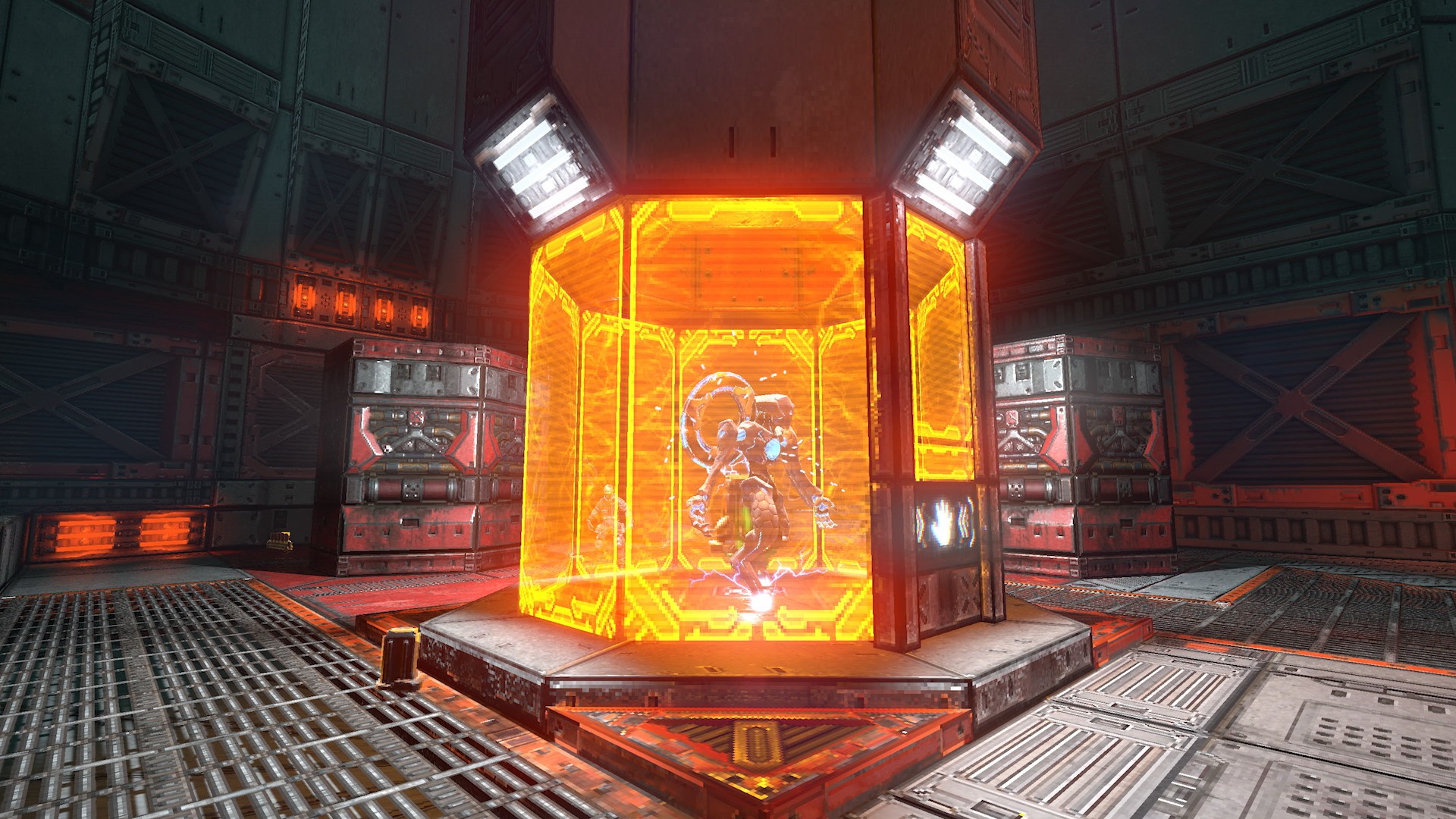 This brings me to the only real complaint that I have at the moment, which is related to the weapon selection system. Basically, you either use hotkeys, which you have to properly assign, or you use this sort of weapon chart that doesn’t feel very intuitive to use. Having a radial selection system instead, or allowing players to assign weapons of the same category to the same hotkey would work so much better. Hopefully, this is something that will be looked at in the future, as it can get tricky to switch between weapons during a fight.

It’s not only the different level layouts that force you to keep changing weapons due to the distance between you and an enemy, but also the enemies themselves. There are your standard zombies, some of which carry guns, but there are also flying enemies, snipers, the Prodeus version of imps that attack you from afar, as well as other more tanky units. There are a lot of times where you’ll be constantly changing weapons during a fight to adapt to these circumstances, and it’s also in those very moments that the true excellence of Prodeus is brought to light. Also worth noting, is the fact that all of this wouldn’t feel complete without the game’s awesome soundtrack, which is composed by none other than Andrew Hulshult. If you’re familiar with his work (Dusk, Nightmare Reaper, DOOM Eternal: The Ancient Gods, amongst others), then you know the kind of quality that you should expect, but if you aren’t, then I’m sure you’ll be surprised.

At the end of the day, I feel like, more than already providing a solid campaign experience, Prodeus stands boldly as an exceptional foundation for future content, all thanks to its level editor, which has the potential to elevate the game to completely new heights. It took me about 3 hours to beat all the campaign levels that are available in the current Early Access build, but I’ve spent just as much time trying out some of the community-made maps. If that doesn’t appeal to you, if you feel that Prodeus doesn’t offer enough content at the moment, then you’re better off waiting until the campaign is fully out. Once that time comes, there will surely be even more custom maps and campaigns to try out. Personally, I think that if you’re an FPS fan, you can’t possibly go wrong with Prodeus.