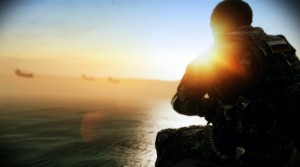 It has been coming. Somebody was going to, as my Mum might say, “catch it in the neck”. After years of military shooters, albeit, mostly rather good ones, one game was going to be on the receiving end of the media backlash. I think most expected it to be Call of Duty. With the series now annualised, it looked as if Treyarch’s Black Ops 2 might be the one, but low and behold, it went out and provided just enough innovation, just enough new ideas to keep the vultures at bay……and then Warfighter arrived.

Not helped in any way by what can only be described as the most generic title of all time, Warfighter, what with its ‘me too’ gameplay and rough edges provided the target that the games media had been looking for……..”FIRE!”.

You’ve probably seen the reviews by now; it’s currently rocking a rather unhealthy 53% and 55% on Metacritic for the 360 and PS3 respectively – nothing short of a disaster in the world of big budget triple-A gaming. To put this into perspective, this puts Warfighter in the same ballpark as the critically mauled, Aliens: Colonial Marines.

So, pretty bad then.

Well, no actually. Medal of Honor: Warfighter isn’t that bad. In fact; it’s actually pretty good. Yes, it has some rough edges and certainly doesn’t do anything especially new or exciting, but with games such as Black Ops II (which is admittedly the more polished product) receiving consistently high scores, I find it harsh (to say the least) that Warfighter would be handed the kind of critical battering usually reserved for the very worst that the industry has to offer – 50% might be a decent movie review, but for a videogame, a 50% might as well be replaced with the image of a virtual turd.

The single player does follow the Call of Duty template to a tee, but it does so with a relative amount of skill on display and is certainly far superior to DICE’s horrifying attempt at imitation for Battlefield 3. Oh, and in fairness, that driving mission through Dubai was aces. Sure, the attempt at a more personal, ‘realistic’ story didn’t really suit the action on screen, what with your character going on nothing short of a killing spree, but that’s a problem inherent to the industry and, at the very least, did offer up some very decent set-pieces and arguably the best looking cut-scenes of the generation (just try to forget how creepy Preacher’s daughter looks)…..damn, that is one weird looking kid.

The real draw though is the multiplayer. Again, on the surface, it’s more of the same, but what is here is very solid and with the inclusion of such cool little innovations as Fireteam spawning and a nationality driven class system, Danger Close have at least attempted to make Warfighter’s multiplayer standout from the ever growing crowd. My favourite thing about it though, and the reason that I keep coming back to it is, the scale. While I can appreciate the grand nature of Battlefield’s combat and the immediacy of Call of Duty’s all conquering multiplayer offerings, there is something about the middle ground that Warfighter, like its predecessor, straddles so well. Not too big that it can occasionally feel empty but not too immediate that I am constantly in fear of being shot in the back of the head, Warfighter’s multiplayer delivers immediate results with enough room for team tactics to really blossom. 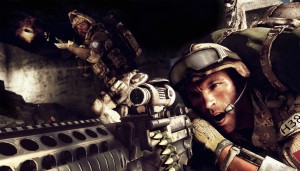 Now, I’m not having a go at Battlefield or Call of Duty; they’re both very good at what they do, but personally, I simply prefer the balance provided by Warfighter and is the primary reason that I am genuinely sad to hear that another release will not be forthcoming.

It’s not a masterpiece by any stretch of the imagination and certainly had its fair share of bugs at launch, but equally, it’s nowhere near the travesty that some have suggested. Could it have done with a few more months of polishing? Sure it could have. It doesn’t do quite enough to make it stand out from the crowd but that doesn’t make it a bad game.

One game was always going to receive the backlash and Warfighter was it. My condolences go to Danger Close.