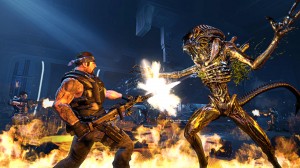 Honestly, it’s not that bad.

Hardly a glowing review, but given the sheer wealth and breadth of criticism fired its way since release, I’m sure those words are amongst the kindest out there for a game that, thanks in no small part to its creators and custodians, has been utterly vilified since the moment it hit shelves.

I should make it clear that my opinion on this is based upon the patched version of the game, so, yes, in fairness, I haven’t had to put up with the plethora of bugs that were so prevalent at launch (not that the patch has fixed all of its troubles), but yes, this is a more polished version than that experienced by those early adopters who had to struggle through Gearbox’s (ok, Timegate’s) shooter at its worst.

Still, patch aside, the worst thing about Colonial Marines is not the bugs so much as the fact that you can see the game it could have (and really should have) been right in front of you. It’s all there; it just needs a few months of polish and refinement. Fundamentally, the game that Aliens: Colonial Marines should have been is here – it’s a solid enough first person shooter, it sounds fantastic and above all else, from a purely artistic standpoint, certainly looks the part.

The story is hardly breathtaking and is certainly devoid of anything revelatory, but as a direct sequel to Cameron’s, Aliens, it totally works. It feels like a genuine, authentic part of that universe, and as always, shooting xenomorphs with an authentic looking and sounding assault rifle is a joy……especially for us children of the 80s.

The problem is that, despite the core experience being here, despite all the pieces being in place to make this the most faithful recreation of Cameron’s, Aliens universe to date, the game itself simply isn’t finished.

It may not be a truly terrible game, but you can’t hide from the fact that it looks and feels exactly what it is; namely a game developed in 9 months. For a game that was announced 6 years ago, that is what is unforgiveable, that is what makes gamers angry when they play Colonial Marines and above all else, that’s what makes this one of the most disappointing games of the generation. Not because it’s a particularly terrible game, no, because we can, and have, seen the game that this should have been, and you know what, it feels like a kick to the crotch………..nobody likes being kicked in the crotch. Well, some do, but they make up a very small part of the general public. 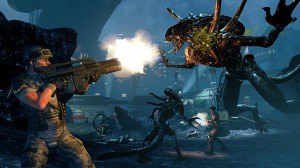 Is it worth playing in its current form? If you’re a fan of Aliens, I would, rather cautiously, say yes. There are enough nods, enough authenticity, and just about enough solid if unspectacular FPS action to make this worth a run through. Saying that, if you are going to enjoy the experience, you’re going to have to forgive some shoddy animations and some genuinely shocking texture work.

For every 15 minutes when everything briefly comes together and you find yourself playing the game you had hoped for, there are 30 minutes waiting just around the corner full of ugly textures, dodgy animations and glitchy gameplay. It’s a strange, largely infuriating experience, but despite common sense telling me otherwise, one that I found myself enjoying more than I probably should have.