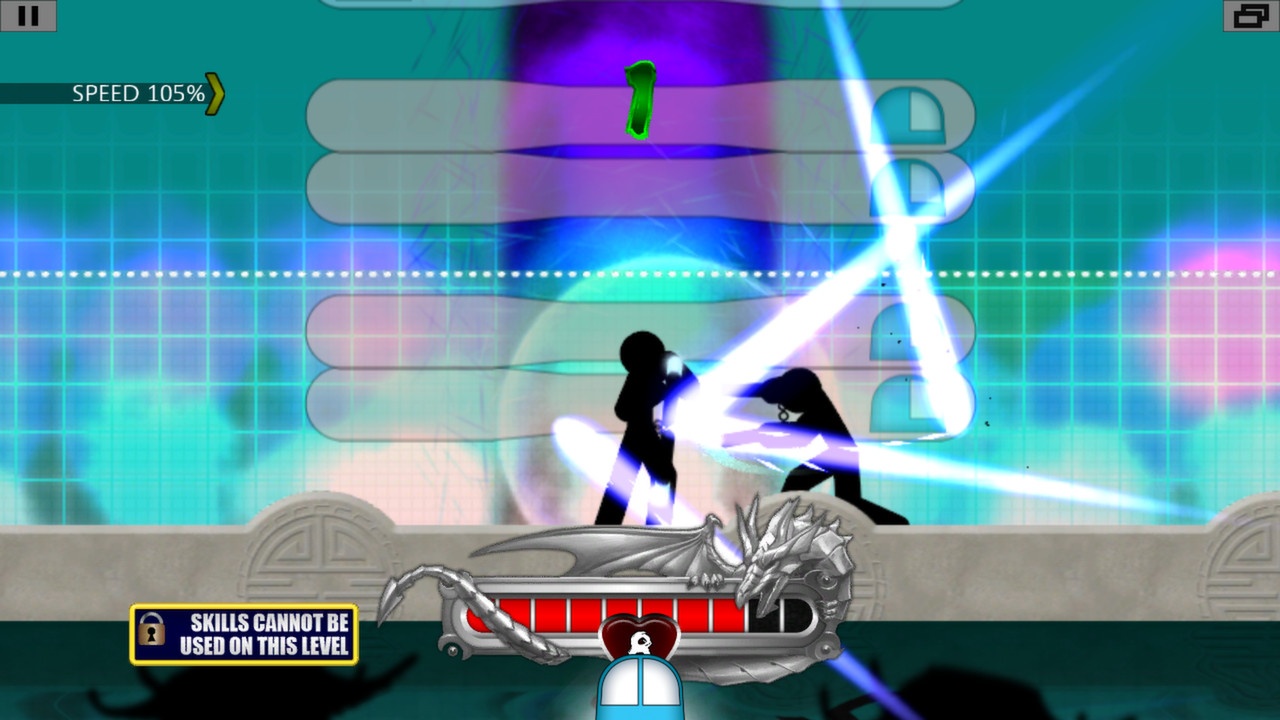 The Xbox 360 and PC seem strange homes for One Finger Death Punch, as it seems perfectly suited to be a mobile phone app to blitz away a few minutes while commuting rather than on a big screen while sat on the couch or comfy chair.  Even stranger, it’s buried away in the Indie section on Xbox 360 rather than Xbox Live Arcade – although at 65p it does represent fantastic value for money (especially as it’s better than many of the actual releases on XBLA).

Like many of the classic games of the past, the key to its success is keeping things simple.  There is no storyline beyond the fact that your white stickman character is a kung fu master and under attack from hordes of grey stickmen goons ready to be pummelled into oblivion.  The controls are similarly stripped-down, consisting of just two buttons; X (attacking to the left) and B (attacking to the right).  Enemies approach from both sides and can be attacked when within range and each go down after a single, crushing blow.  While you can’t move your own stickman directly each strike sees him darting from enemy to enemy and with successive hits your range and power increases.

It’s not long before more challenging enemies are introduced as some brightly-coloured newcomers start to require specific combos to be defeated – with the sequence of hits needed indicated below them, and as you’ll quickly learn, by their colour as well.  Brawlers (recognisable by the fact they wear a crown) also enter the fray and once engaged you’ll temporarily enter into a frenetic one-on-one battle with the necessary actions scrolling down the screen in a style very reminiscent of the Guitar Hero series. 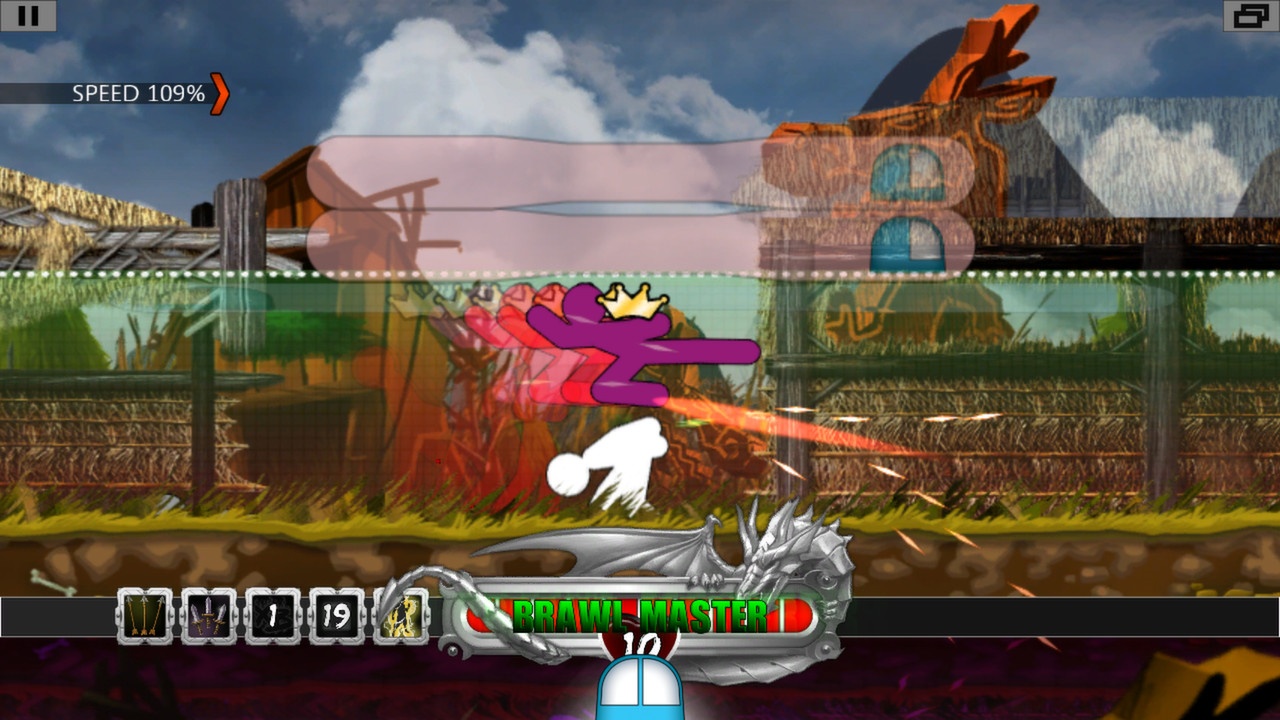 However you’ll also have some extra tricks of your own to call upon – weapons can be temporarily picked up to extend your range or launched across the screen to impale multiple enemies.  Various skills can also be accumulated as you work your way across the world map, ranging from the ability to slow down time to dramatic special moves that can clear the whole screen of enemies.  Only a limited number of skills can be active at once though, which brings a tactical element to the game as you can vary your chosen skills before each round to better face the oncoming challenges.

Graphically the game is pretty impressive considering it largely consists of stickmen fighting against a flat landscape.  Characters are bright, dynamic and colourful – even if they spend most of the time being dispatched with crushing brutality and liberal helpings of blood.  Occasionally there are further dramatic flourishes as the game enters slow-mo mode or zooms in to show hearts being punched through chests and limbs broken.  On the audio side the action is well soundtracked by the kung fu standard yelps, screams and thumps while some up-tempo background music gets your blood pumping, and the classic kung fu atmosphere is nicely capped off by the heavily accented voice-over that introduces each round. 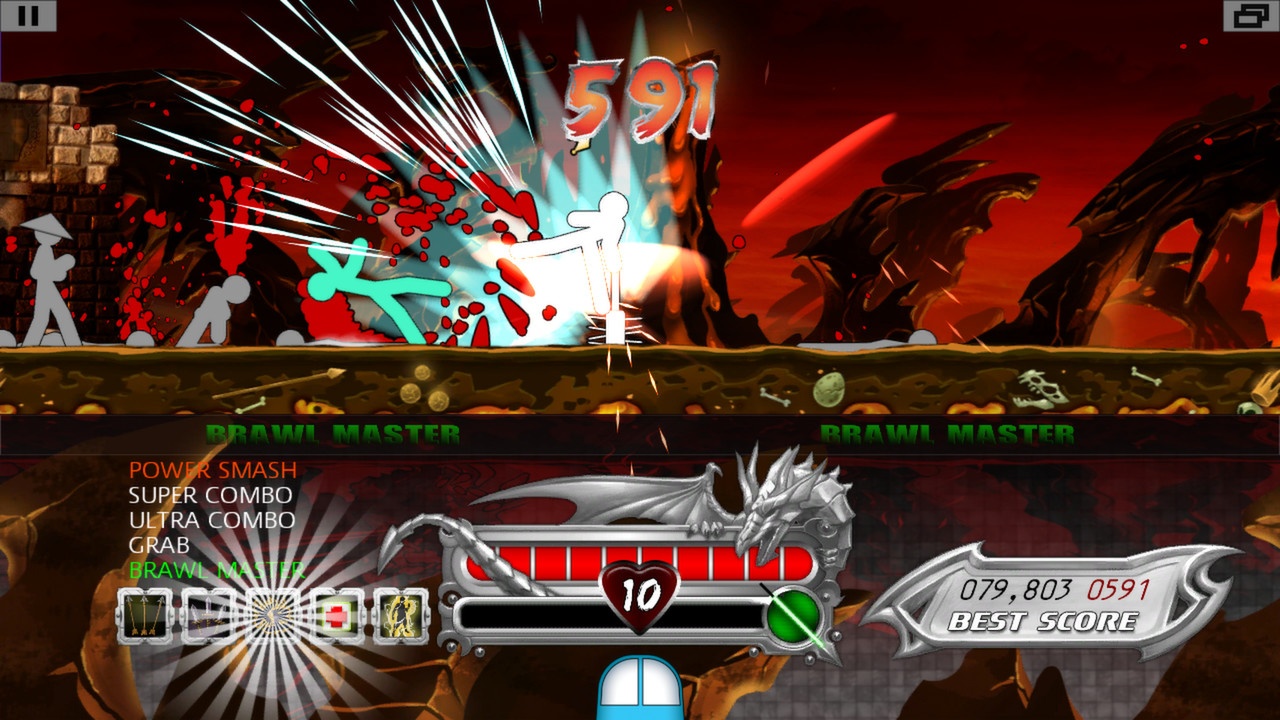 While listing all the positive aspects it is necessary to acknowledge the game can get a bit repetitive.  The different fighting styles adopted by your fighter per round may all look different but play exactly the same and despite mixing up the standard ‘mob’ rounds with variations such as speed, defender, ‘light sword’ (definitely not light sabres just in case George Lucas is reading) or boss rounds each one essentially boils down to the same formula of destroying all your enemies with as few misses as possible and without losing all your lives.  However, with each round only lasting a few minutes at most this rarely affects your gaming experience as you’ll constantly be craving ‘just one more go’ – always the sign of a classic game.  This is further helped by the use of an adaptive difficulty level, a feature that seems remarkably rare in most modern games.  Comprehensively completing a round will see the game speed increase in the next round, and repeatedly failing will see the speed gradually lowered so even if you find yourself stuck on a frustrating level you’ll eventually be able to grind your way past it.

But on the whole you’ll very rarely feel frustrated as the combat is so satisfying, a pleasing mix of rhythm game and the fighting system of the Batman: Arkham series.  There’s an ebb and flow to the fights and as the speed starts to rocket up, reflexes kick into overdrive and you enter a state of gaming zen – feeling like the star of your own, personal martial arts movie.  And the key thing is it’s just FUN. I even found myself replaying completed rounds, not just to improve my score and earn those coveted medals, but because I wanted to relive those classic battles – and for me that’s the clearest sign there is of a quality game.

REVIEW CODE: A complimentary Xbox 360 code was provided to Bonus Stage for this review. Please send all review code enquiries to press@4gn.co.uk.