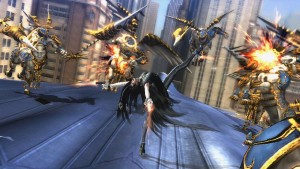 What is the greatest stage / level of any video game ever? Well, damned if I know. To be honest, it’s not something I had really thought of until recently. The question came to mind after I finished the absolutely fantastic final stage of the, well, really rather fantastic Bayonetta 2.

Superior to its already spectacular predecessor in just about every respect, Bayonetta 2 stands as the pinnacle of the action genre and is unquestionably amongst the finest games released in 2014. As you would expect from a Platinum developed video game (let’s just pretend that The Legend of Korra didn’t happen), Bayonetta 2 is chock full of outrageously unforgettable moments, but even in a game in which the bar is so often raised, I would argue that its finale ultimately steals the show.

Now, while I won’t be going in to story spoilers, be warned that I will be detailing the mechanics of the final stage in some detail, so if you want to remain clueless going in, please look away now….. 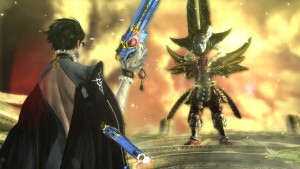 Still here? Ok, good. So, that final stage….it really is something special. I’m not usually a fan of those boss runs that you so often find in games of this ilk – you know, the kind that see you face-off against all previous bosses in the run-up to the final big bad. They are tedious, and, let’s be honest, pretty damn lazy. Not in Bayonetta 2 though. Here, it’s dealt with such class and such reverence that I couldn’t help but love every moment of every re-played battle. The difficulty and length of each battle is wisely toned down, but more importantly, each battles takes place via one of the greatest homages in video game history.

After the fantastic Space Harrier homage of the original Bayonetta, Platinum games went one better by fusing together the mechanics and aesthetics of Bayonetta with those of Sega’s arcade classic After Burner for a final boss run that manages to retain the core mechanics of both games while never undermining the challenge provided via the array of battles in the final stretch of the game.

Perhaps it’s because I’m a huge Sega fan (and a huge Platinum fan for that matter), but the way that Platinum combined the fundamental principles of each game to create something that feels like both After Burner and Bayonetta is something very special indeed. You still feel like you’re playing Bayonetta, but equally, if you were to remove the slash attack, you could be easily tricked in to believing that you are playing After Burner Climax 2. 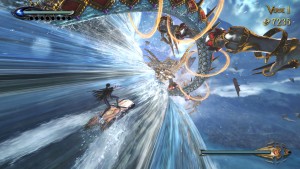 Not only did this combination elevate an otherwise bog standard boss run into what is arguably the finest stage in the game (in my opinion anyway), but it also delivered yet another fine example of the games’ unmatched spectacle and a great build up to a very solid final boss encounter. Sure, the final boss doesn’t live up to the preceding battle and yes, his second form does make him look like a cut price Seth from Street Fighter III, but the scale is still there, the spectacle is there, and as always, the gameplay is there.

If that’s not enough, unlock the right outfit, and that After Burner homage suddenly becomes and Star Fox homage, and you know what, somehow, it works just as well. Perhaps its testament to how similar those two games are, but either way, it’s brilliant in both After Burner and Star Fox mode.

I couldn’t say that it’s definitively my favourite video game stage of all time, but honestly, it would be in the conversation.

Speaking of conversation, I’ve made a list below of my top 10 favourite video game stages. Is yours on the list? Have I missed something obvious? Do let me know.

3)      The Legend of Zelda: Ocarina of Time – Water Temple (the definitive Zelda temple)

7)      Half Life 2 – We Don’t Go To Ravenholm (a horror game in the middle of one of the finest first person shooters of all time? Oh, go on then)

10)    Final Fantasy VII – Mako Reactors (the music, the visuals, the art design – it was Final Fantasy, but not how we knew it)