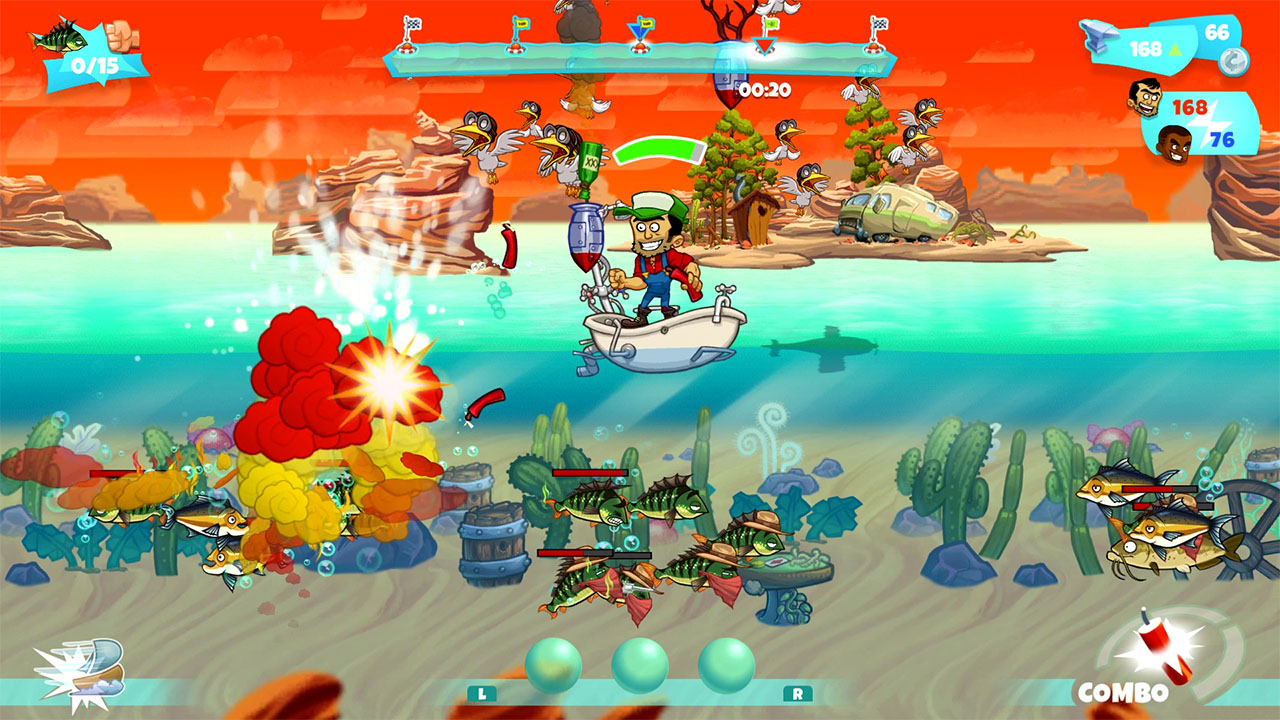 In the politically correct world we live in you may or may not be someone who goes fishing. If you do fish it is likely you use nothing more than a fishing rod and a fishing net. In the politically incorrect world of gaming you get the chance to live out dreams of blowing fish up not for food or to clear a pest but for the glory. This is what Dynamite Fishing: World Games is about, blowing fish up to your heart’s content.

Dynamite Fishing: World Games is a side scrolling game where by you have to blow up fish using dynamite. You throw dynamite into the water and wait for the fish to succumb to a fiery death courtesy of your disregard for the local environment. In single player mode you’re up against another watery foe who you need to beat by collecting more fish than them. Each stage is quite short with a timer, the idea is to reach the end and blow as many fish up as you can, there are various sections within each stage where the fish become more plentiful for your destructive needs. 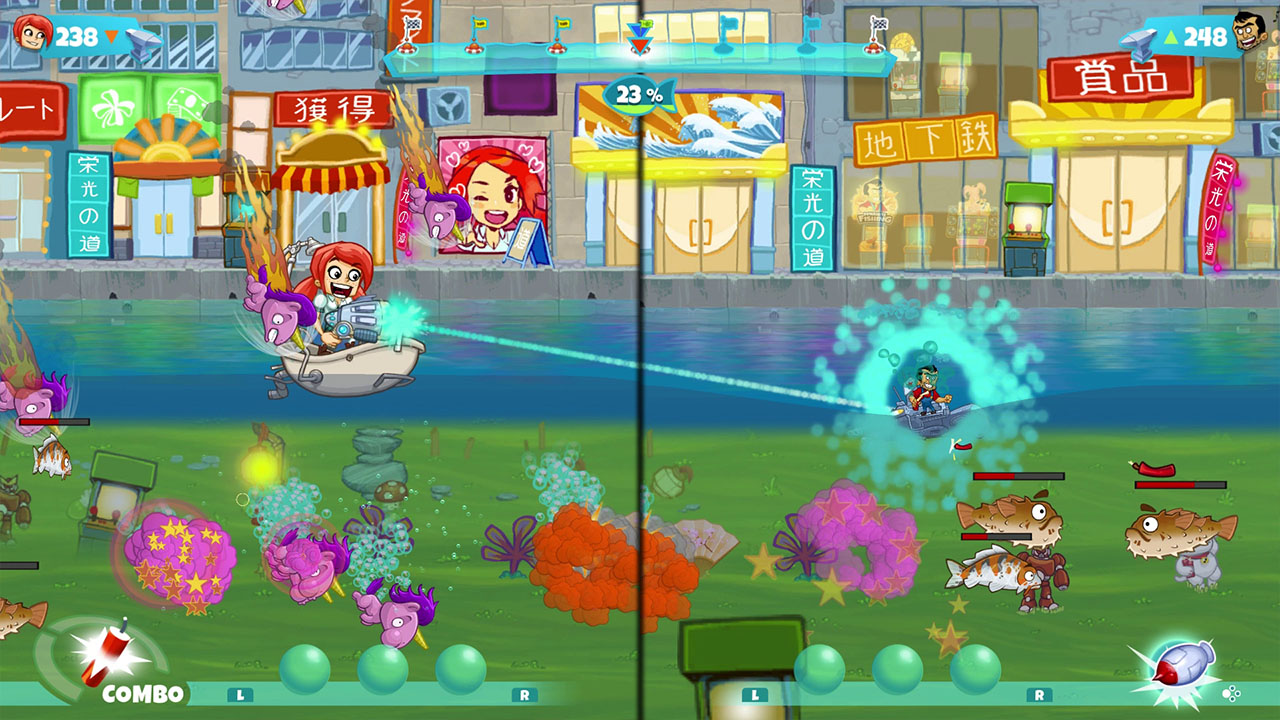 There are various characters you can control such as Redneck Joe, Metal Moe, DJ Dynamite, Wild Wendy or Death, as you progress through the stages you will become to unlock them. The same process is applied to the boats you can use, you start of with a simple bathtub, as you progress this can be upgraded which makes blowing up fish a much more satisfying experience. Each character and boat are quite distinctive and suit the very bold and colourful backdrops you play against. There are several fishing spots to wade into that include a jungle background, Japan and Venice. Each stage comes across in a very vibrant way and makes Dynamite Fishing a bit more enjoyable to play but it stills feel like a small catch.

There are plenty of special weapons to utilise alongside your dynamiting that include a toaster, a sexy fish, stinky shoe, a squirrel bomb, a fridge, a gatling gun and nuclear bomb. The nuclear bomb has the best cut scene to it although if it’s a weapon you use a lot you’ll see the cut scene too many times. To be fair to Dynamite Fishing the weapons are quite clever in both design and execution. There are plenty of fish to blow up but they can also damage you, some carry six shooters whilst others just take chunk out of your boat. Unfortunately for Dynamite Fishing it’s a very easy game to play, the difficulty doesn’t appear to go above what you could class as beginner which is a shame. Dynamite Fishing does feel throughout like your shooting fish in a barrel i.e. it’s too easier to master. For example, in the timed sections you can’t leave the area until the timer ends so it removes any kind of tension of deciding whether to try to blow up as much fish as possible against reaching the end within the time limit. 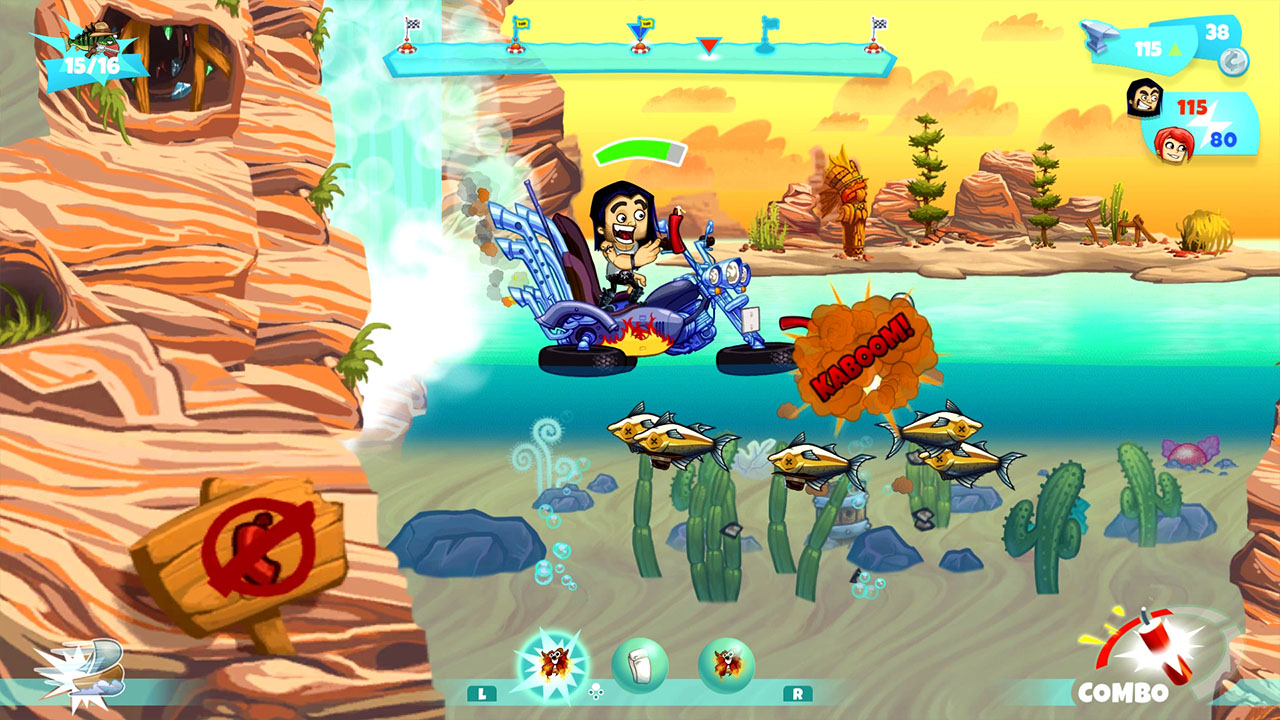 There’s the expected multiplayer which Dynamite Fishing does reasonably well, like most competitive games they’re better to play with friends but in the case of Dynamite Fishing it’s not that much batter (probably the worst fish related pun in this review). In terms of other things to do in Dynamite Fishing there really isn’t much else to fish for, after the first few stages you’ll find the repetitiveness setting in and the mindless dropping of dynamite will lose its app-eel 🙂