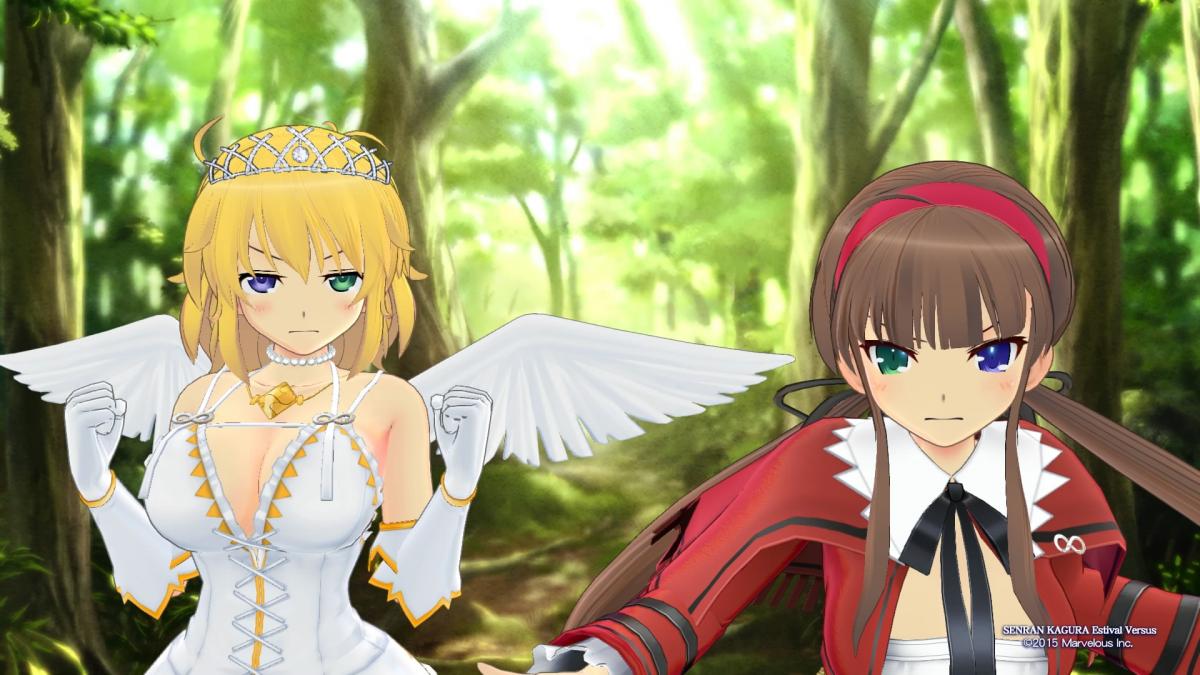 Senran Kagura is a weird weird game. Based from an anime series the objective of the game is to play as one of eight ninjas and fight till the opponent’s clothes fall off, yes you read that right. This came as a bit of a shock for me as I had no idea what to expect when I picked this game it does serve a purpose though the clothes acts as your defence and the less you have the more beaten up you like (I guess). However if you can get past this silly but sometimes hilarious mechanic there is definitely a good solid fighting game here that some people could enjoy.

The first thing I will say about Senran Kagura is it definitely has a unique style about it. The anime characters look crisp and sharp and the background environments are well designed. Enemies are often copies of the same model and you fight a good group of these at a time (sometimes hundreds very much like Dynasty Warriors). I encountered very little slow down despite how many enemies were on-screen at one time and the overall performance of the game was smooth. it ran very nicely considering how much was going on at times. 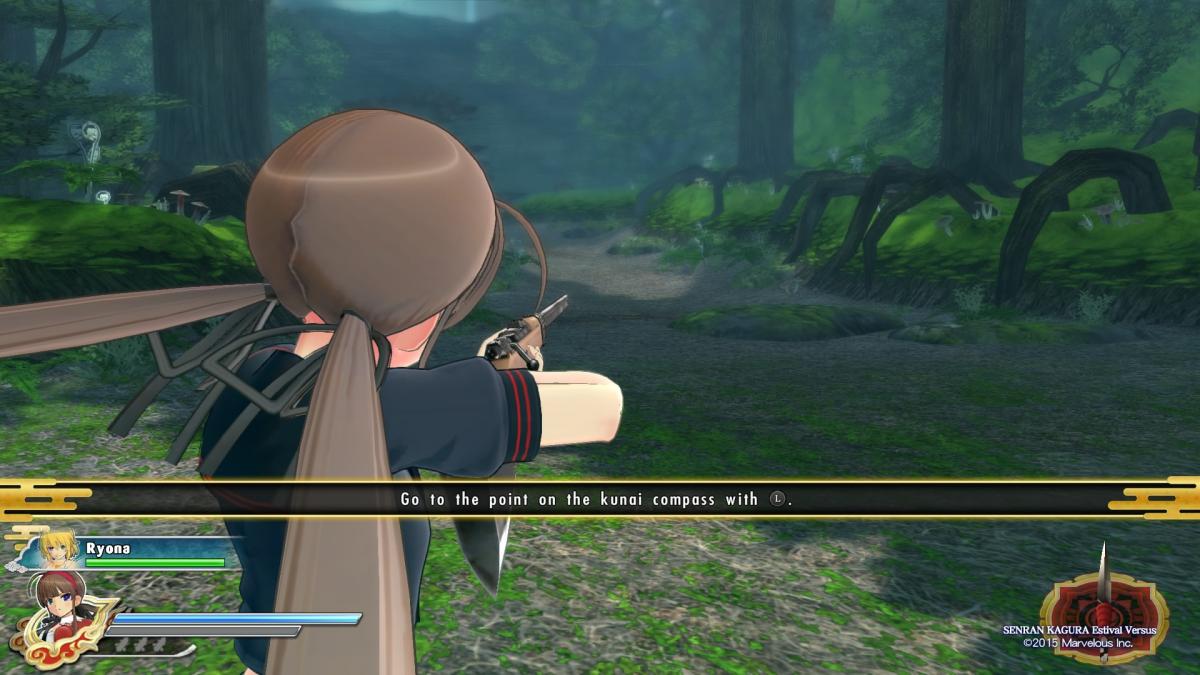 The story is pretty much a nonstarter and didn’t really interest me at all the anime cut scenes were nice to watch though and I do wish more games went with this direction. The gameplay however is this games strongest point and that’s what matters right? It’s actually fun. Stringing together combos is quick, easy and frantic. You can just button mash but if you do that you are missing the whole point and it will get boring very quickly. Each character has their own way of combat and learning them all to deal some serious punishment is tons of fun. The ultimate power up in this game is called Shinobi Tenzin and it’s almost like a Sailor moon like transformation expect it really doesn’t leave much to your imagination. It pushes the boundaries of full nudity only a shining light blocking the characters private parts….. The outfits for all the characters are both silly and very revealing as well especially the shinobi ones. Needless to say for fans of the anime this game delivers everything they could want or expect from it.

By far my biggest gripe with the game is the camera. Sometimes I’d find myself been surrounded by tons of enemies and I couldn’t see where I was going this was frustrating as I’d have to stop my combo and jump up just so I could see where I was the camera does try follow the action but it falls short. I found this worst when I was locked onto a single target I would have the scenery obstruct my view or a group of enemies that were higher than me locked on when I wanted to lock on to something at my ground level.. There is also a parry available to you but I will be honest I never used it I never really saw the need to and it’s quite difficult to execute. 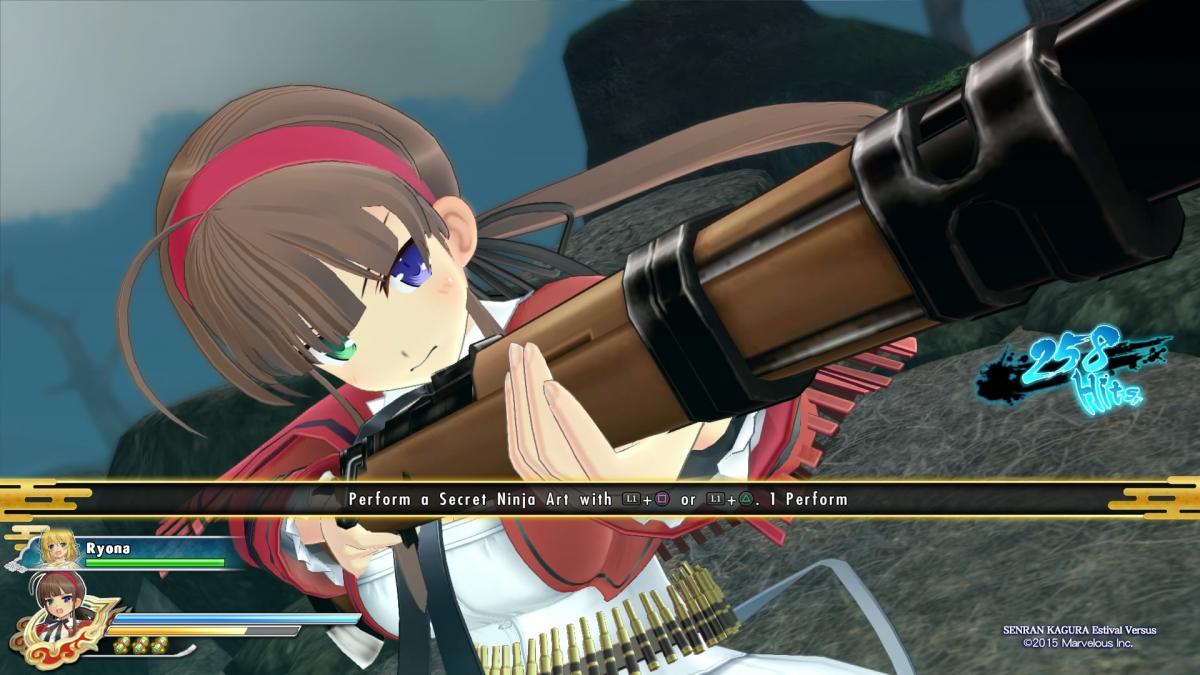 Bosses in the game act as a single enemy you will have to fight. As you fight them their clothes will start to get damaged and when their health is at around half they will change into their Shinobi outfits. This would be pretty cool if it meant anything. The enemy still does the same attacks and the only difference is the health bar that was depleted is now full again. At one stage in the game I faced three characters at once and it was ridiculously frustrating as the difficulty just skyrocketed and I found myself at one time just spamming my stomp move just to ensure I beat them.

Rewards come at a premium though as you unlock new outfits, poses and background’s in a mode outside of the story mode dress up mode. Yes, you can play dress up with your favourite girl if you so wish. Senran Kagura does have a lot of flaws and it most certainly won’t appeal to everyone it’s one of those games japan savoir and I know after looking it up there was a lot of request for this to come to the west. There is no English voiceover everything is as it was in the original Japanese game apart from the translation job. This is another thing that will put people off giving it ago if you can see past the needless loss of clothes and take humour in it you would enjoy what Senran Kagura Estival versus has to offer. A quick fighting beat em up which takes dynasty warriors and dead or alive and mixes them into an anime fighting game with boobs, lots and lots of boobs and if that isn’t your thing this really isn’t going to be for you.