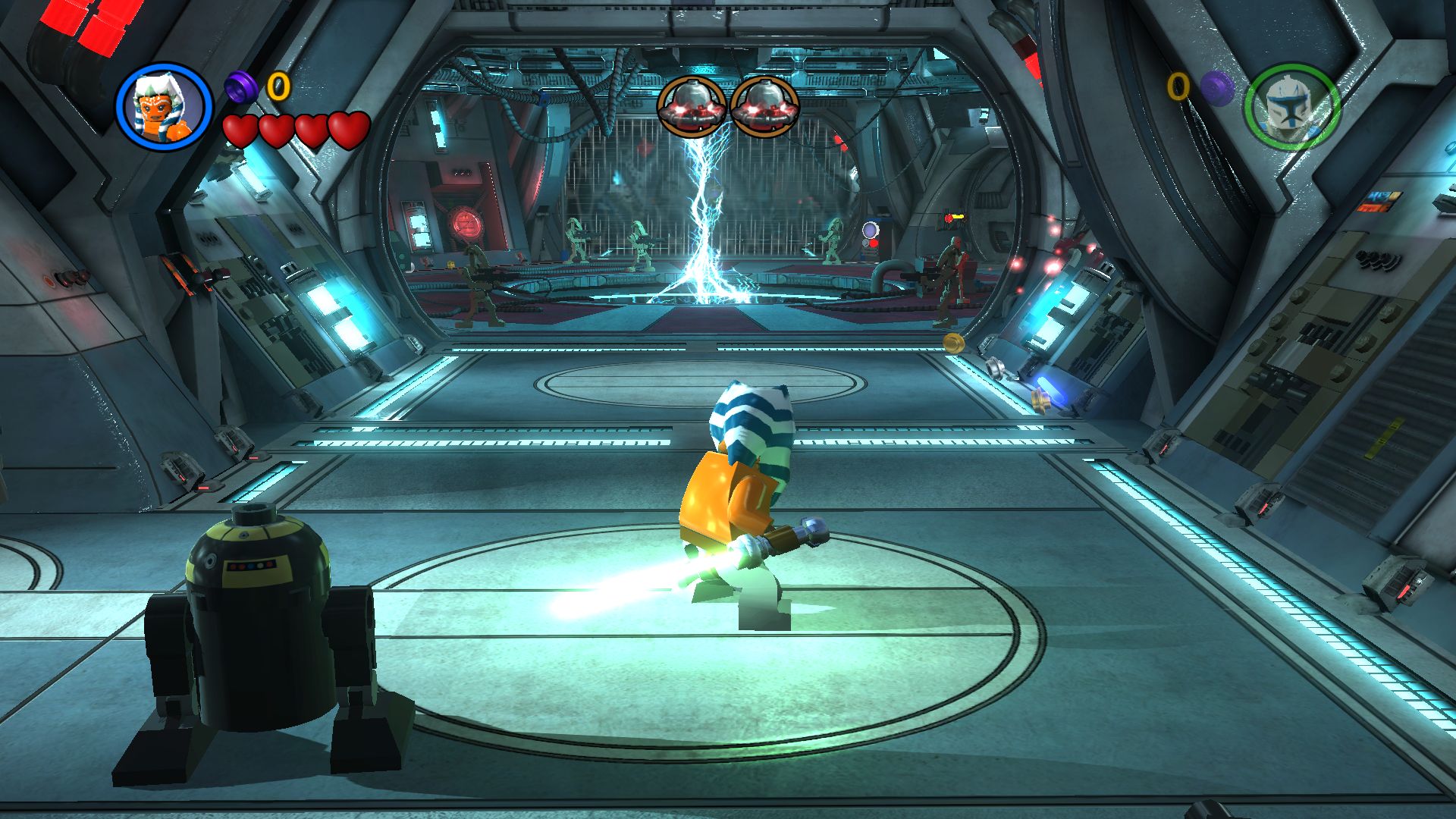 Despite the core smash-and-collect gameplay remaining largely unchanged since the original Lego Star Wars released back in 2005, the extraordinarily popular line of Lego-themed videogames have actually proved surprisingly varied in their approach to each subsequent release and have showcased a safely played, but nonetheless successful, evolution of the series. While it would seem easy to quash this claim based on the series little changed core mechanics, it is the world that surrounds them and, especially in the case of The Clone Wars, the size of the gameworld created to encompass those mechanics, that really highlights the series’ ambitions over the past few years.

If you have any doubts, just try playing the original Lego Star Wars after spending some time with The Clone Wars – believe me, the difference is somewhat striking. Beyond the obvious visual improvements (which are dramatic), it is in the amount that can be done and the ambition on display that really sets the two games apart. Sure, you still smash enemies, the environment and pretty much anything else that looks like it might fall apart, and yes, you’ll still complete a host of extremely lenient puzzles, but the overall experience feels much more fleshed out, with the storytelling techniques in particularly proving hugely improved over its predecessor.

You still get the same, silent, outrageously charming Lego faces, but rather than an over reliance upon players’ knowledge of the films upon which they are based, The Clone Wars does a surprisingly good job of re-enacting the story from series 1 and 2 of The Clone Wars while maintaining the sense of fun that the series is famous for – all the while delivering a free flowing gameplay experience that has often been lacking from previous releases in the series. Rather than moving blindly from one set piece (or famous scene) to the next, the progression here feels much more natural with in-depth knowledge of the series’ events far from a prerequisite for enjoyment or understanding of the tale being told. 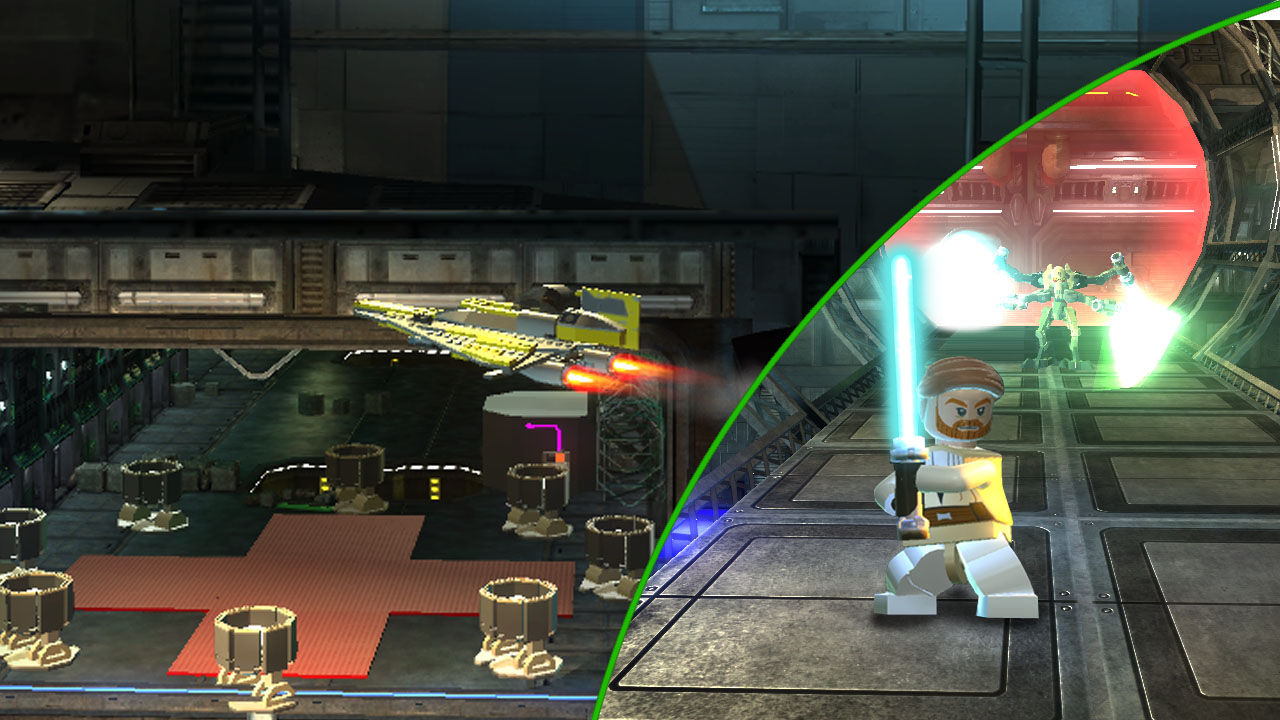 This sense of progression is further aided by The Clone War’s ability to seamlessly move from space-based vehicular battles back to the traditional on foot sections within the space of a level, giving the whole game a much greater fluency, with the world created subsequently feeling like a much more cohesive place and no longer like a collection of random locations plucked from the movies.

Beyond a raft of minor improvements to the formula, the same core gameplay that sees you collecting Lego studs, red power bricks and the usual minikits returns, refined but largely unchanged. It still provides hours of simplistic but hugely addictive fun for the whole family, it still throws in the obligatory but nevertheless entertaining vehicular sections and it is still a great deal more enjoyable when played with a friend in tow. One major change you will notice almost immediately however, is the truly epic scale on which much of the The Clone Wars is played.

This is never more apparent than in the all new, RTS-lite sections of gameplay that have hundreds of units on screen at once and encourage mild bouts of strategic gameplay that allow you to switch between single character battle and large scale creation. There is very little actual challenge in these parts of the game and the enemy will rarely, if ever, attempt to expose a taken base if you’re off running around the battlefield like a maniac, but they do offer a welcome change of pace and help bring life to The Clone War’s large scale battles.

Beyond basic unit creation, these sections play out in a similar vein to Battlefield, with extra bases obtained via extended proximity. Charging around the large levels on the decent selection of vehicles available and taking command of mounted cannons is always fun, even if urgency is all but removed by the complete lack of threat to a base once it has been occupied. This of course is amended via the inclusion of two human players for the games multiplayer battles, but even then, as an extended multiplayer experience, it doesn’t really have the legs or depth to consistently entertain. Anyway, why would you want to play against each other when the co-op is such a hoot. 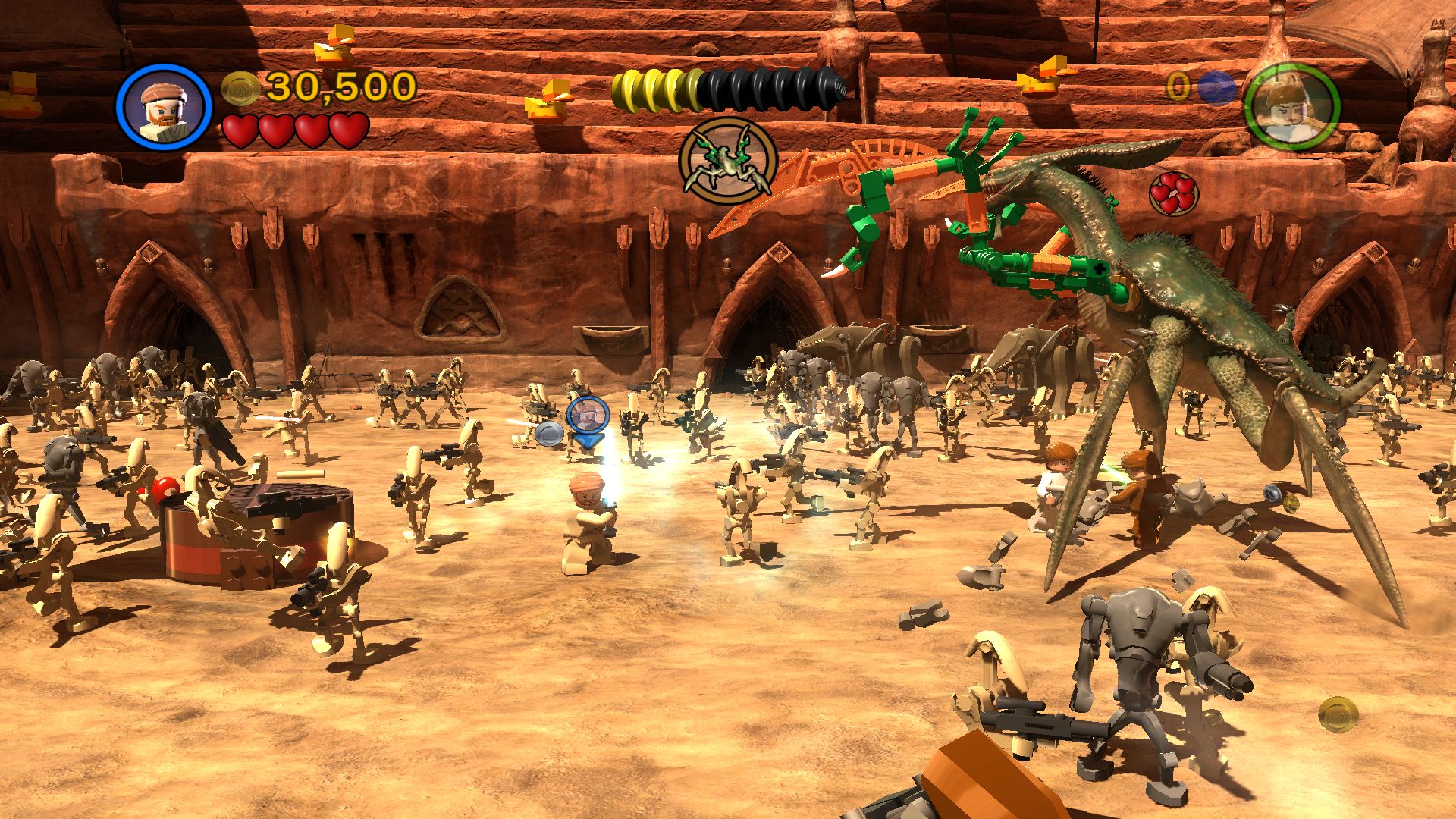 Despite improvements to the overall design and the huge increase in scale, the Clone Wars isn’t without its faults. While it probably won’t prove a problem for adult gamers, for the kids getting involved there are points in the game where progression is not made obvious, lending itself to much in the way of aimless wandering. Anakin’s command ship, the Resolute, which acts as the games hub, also isn’t as clearly structured as the hubs found in previous games. This is in part thanks to the three pronged storyline that can be skipped between at will and also, quite inevitably, due to the sizeable increase in content (a fair trade off in my opinion). Seriously though, these are minor gripes, and for an adult gamer they will more than likely seem ridiculous, but the fact remains; The Clone Wars isn’t quite as child friendly as its predecessors.

Regardless of these most minor of gripes, The Clone Wars is nonetheless an absolutely fantastic package and is without question the finest game in the Lego series to date. Not only does it have a ton of content, a much larger scale and a refined take on the classic Lego Star Wars gameplay, but it also happens to look absolutely fantastic thanks to some hugely improved lighting techniques and a generally more realistic look to the game’s many beautifully realised locations.

With so many games released in the last few years, it’d be easy to dismiss the Lego series as a lazy cash-in, but the fact of the matter is, Traveller’s Tales have proved one of the most consistent developers of the last five years and the Star Wars Lego games one of the most successful and perfectly pitched tie-ins of recent times. The Clone Wars may not have the cultural draw of the Original Trilogy or even the Prequels for that matter, but as a complete videogame experience, The Clone Wars is the most polished, complete game in the series to date.